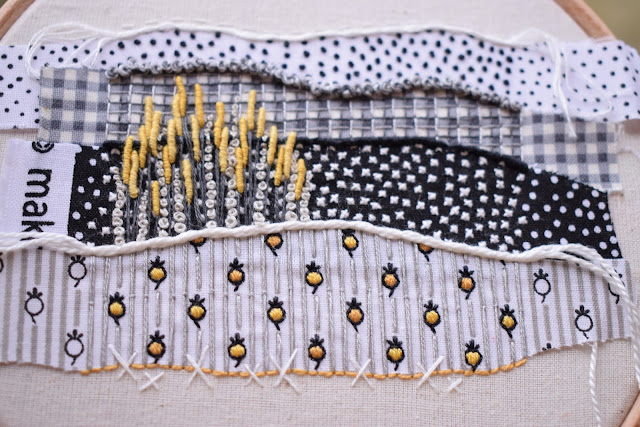 I am still working through some little double mount frames that I bought in a supermarket a while ago. They got put into the back of a drawer a while ago and every now and then I come across them and take one out to fill up with a Stitchscape! This time I pulled out a grey frame and thought that it would look great with a greyscale 'scape - especially as I bought some more black and white fabric prints at the Ardingly Quilt show at the beginning of the year.
It didn't completely stay black and white though as it was a bit boring and one of my Facebook followers suggested adding a mustard or bright red to the mix - an excellent suggestion! The little seed pods at the bottom got a makeover with alternate mustard-esque coloured satin stitches. 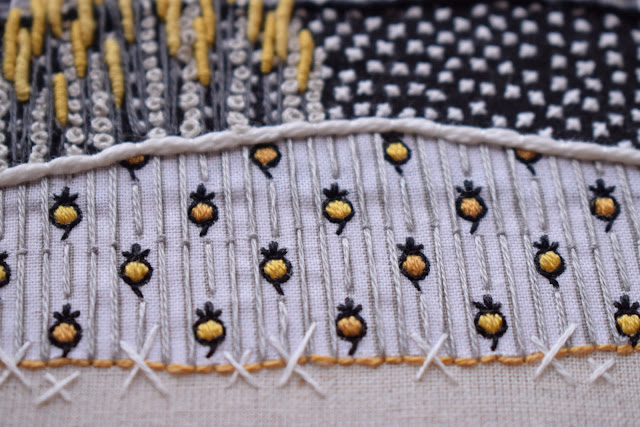 Then the bottom of the layer got a line of back stitch in the darker mustard colour and I thought that was it but the piece was still missing something! It was all linear stripes of fabric with texture but nothing interesting about it, so some mustard bullion knot flowers and grey french knot taper flowers were added in a clump taking up one half of the square. 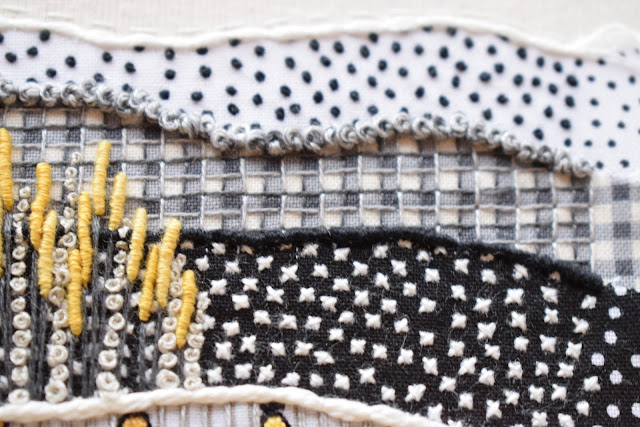 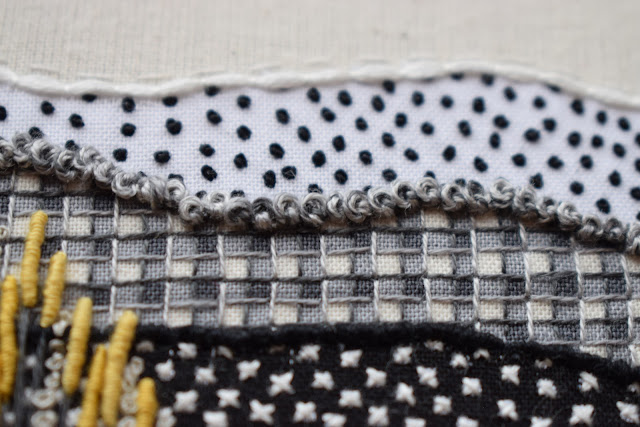 I really love the greyscale check fabric, the colours of which I have matched in a mixed french knot line to the top of the layer. I have enjoyed experimenting with adding multiple colours to french knots and work them quite often in my Stitchscapes now. It's a really nice way of adding a little bit of something extra to an otherwise boring knot. 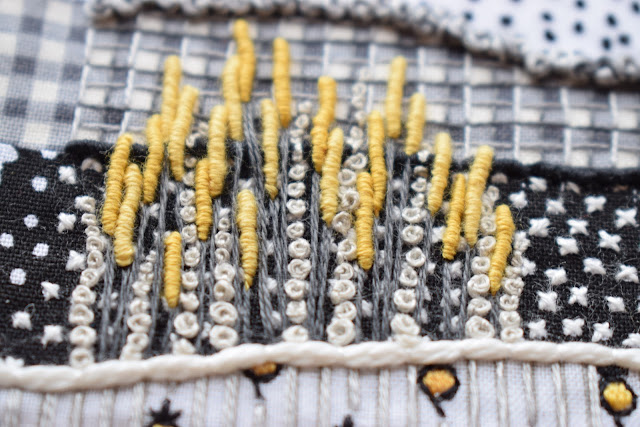 I have two lines of couched threads to the tops of layers. One is using two full strands of embroidery stranded floss and the lower one, pictured above, is using four strands of a thicker perlé thread which I've twisted slightly as I couch it down.
All I have to do now is frame it! 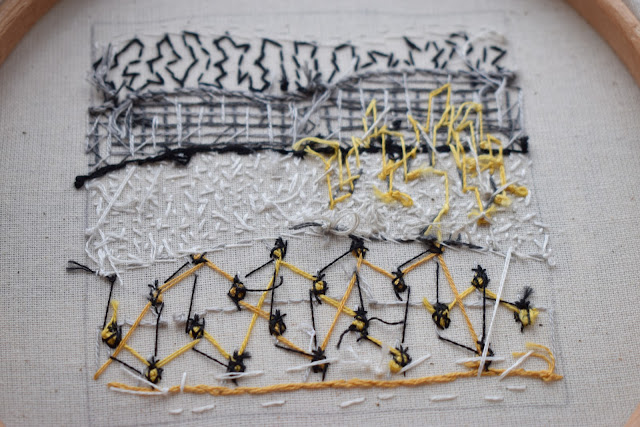 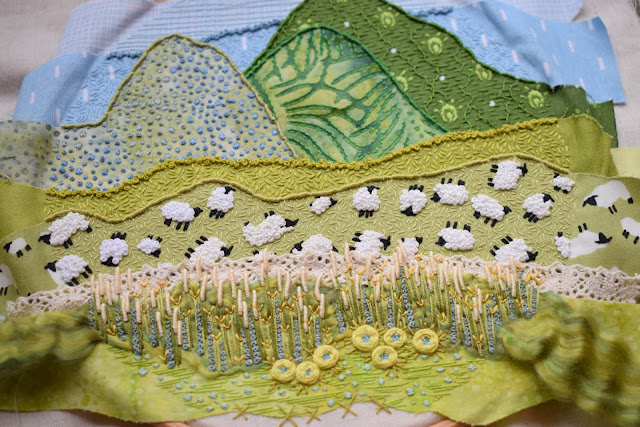 The Mother and I went to the Ardingly Quilt Show again this year sometime in January and I told myself I could only buy fabrics that I NEEDED! Of course, that only worked to a certain extent because the stallholders there have such fantastic deals on the fat quarters and, in my opinion, I need ALL the fabric!!
I ended up buying several different batik fabrics which are just beautiful and a lot of green fabrics as I have a commission that requires a lot of green. I couldn't share the commissioned piece with you all so thought I would have a play with another green themed Stitchscape, and this one started appearing in my hoop! I am still feeling very inspired by my Yorkshire holiday and all of the green fields I can see on my commute to work during the week. We've had a relatively mild Winter and the sunshine hangs low in the sky, tinging everything with a wintry golden green hue. 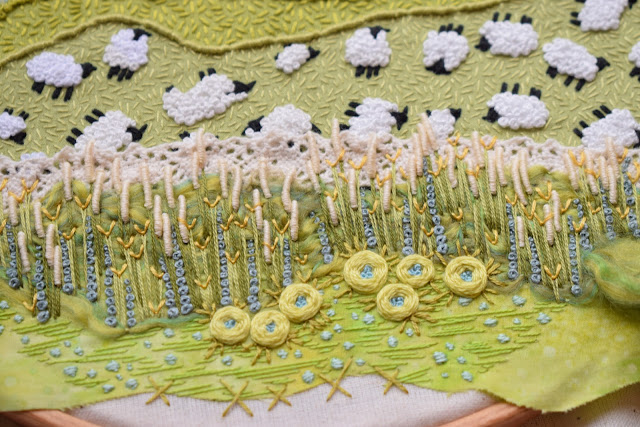 This Stitchscape is very green and uses a lot of the fabrics I bought at the show, apart from the Rose & Hubble sheep fabric which I used in the Woollydale kit and the two blue fabrics in the sky which I already had. The fluffy wool at the bottom is an unraveled fancy yarn from Hobby Craft called Funky Chunky, it has the most amazing green colours shot through it and is super soft and silky. 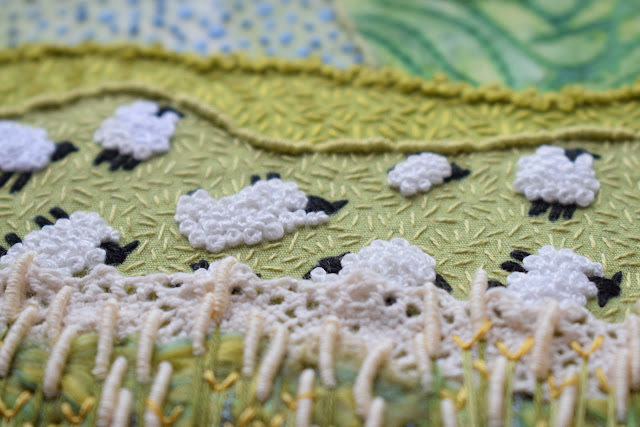 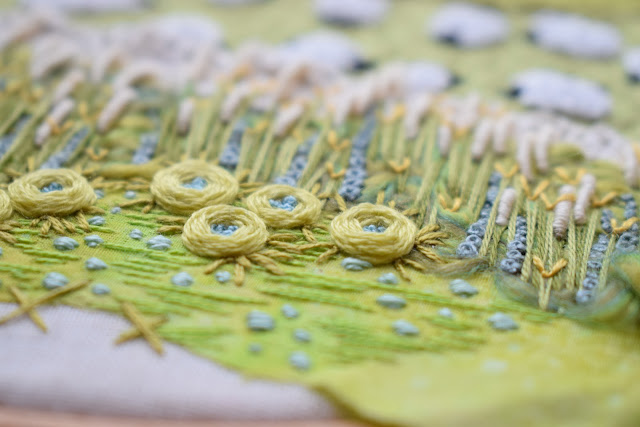 I wanted to use my woven wheel stitches in this piece although I'm still not sure whether I've managed to 'bed' them in properly. Maybe they stick out a little oddly still but they certainly draw your eye down to the bottom of the piece. Around the wheels are fly stitches crossing over each other like spiky leaves. 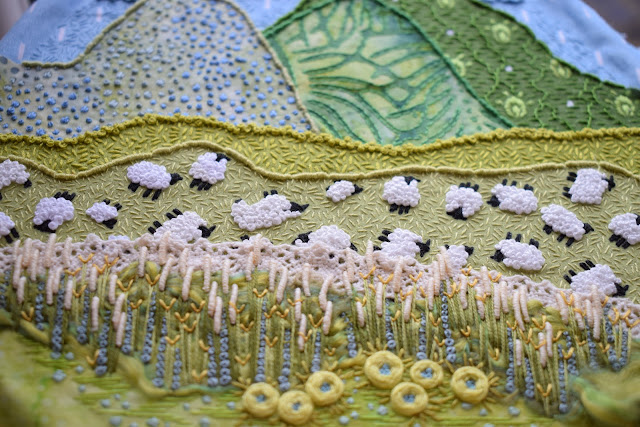 The stitches used in the mad hedgerow section are straight stitch stems, bullion knot flowers, french knot tapered flowers and detached fly stitch flowers. I love the way the wool roving works in and out of these stitches and drifts off to random horizontal straight stitches in the bottom fabric layer, which also has some of its blue batik spots covered in a rough satin stitch. This really reflects the blue mountain layer above and ties the top to the bottom which is an excellent balancing trick. 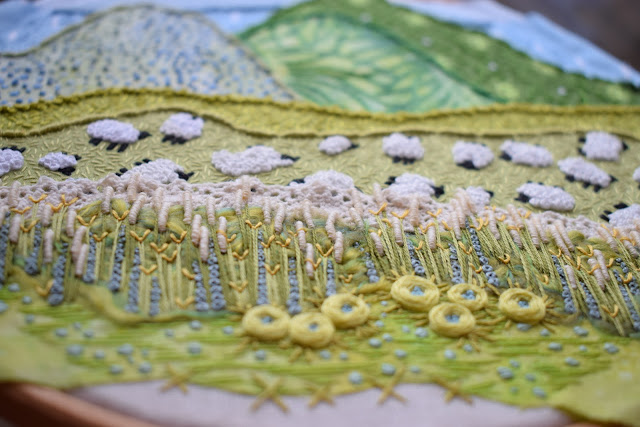 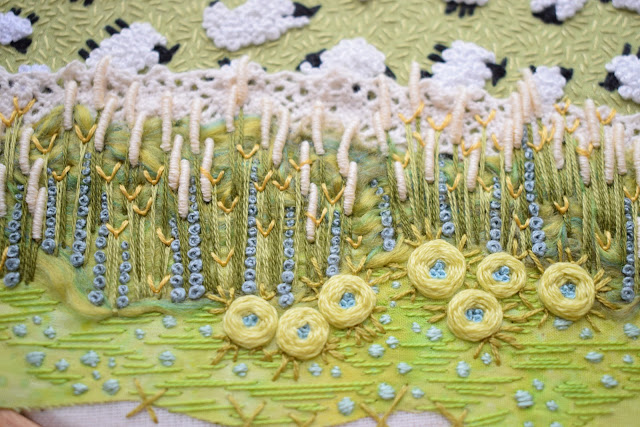 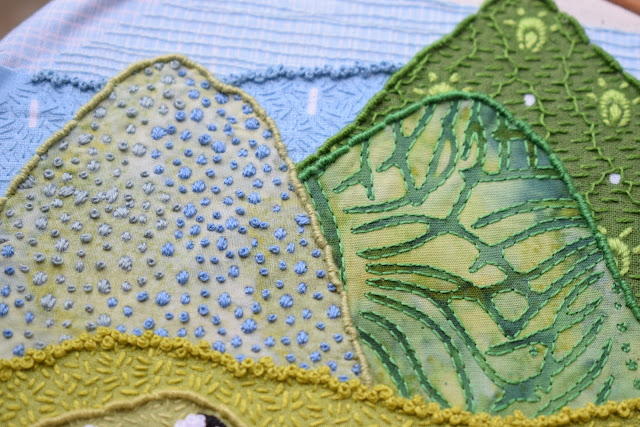 The mountains work really nicely together I think. The blue mountain has a combination of french knots and rough satin stitch circles depending on how big the batik spot on the fabric was, it feels great to run your fingers over! The batik mountain next to it has been very simply back stitched around the shapes and the big mountain next to that has a rough satin stitch over the lighter shapes, horizontal running stitch around those and vertical whip stitch in the gaps. Lots of texture in these 'ere hills!
The back looks really interesting for this one, especially the middle mountain. Overall, I have used french knots, bullion knots, running stitch, back stitch, satin stitch, whip stitch, fly stitch, straight stitch, seed stitch, cross stitch and woven wheel stitch. 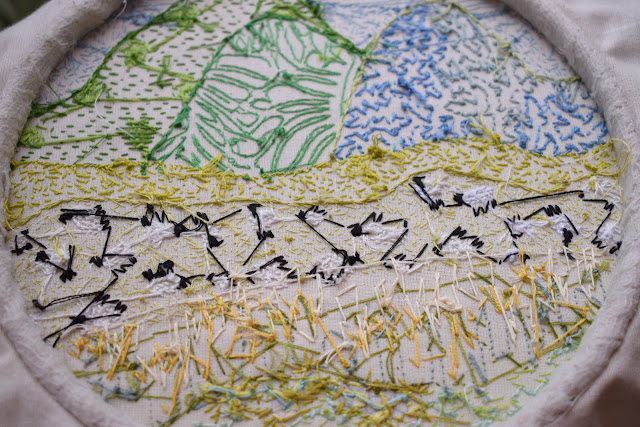