Isn't it funny how you get no decent post for AGES and then it all comes at once! One of my interesting envelopes last night contained my return Alphabet ATCs (A & B). There were photos of all the ones sent to the host lady put up on our website MixedMediaATC_UK and it is amazing what people come up with! Here are the ones I received...can't wait for this months to come back!! 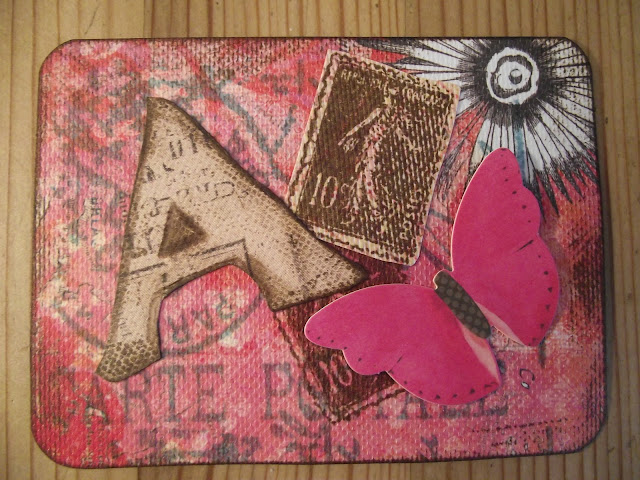 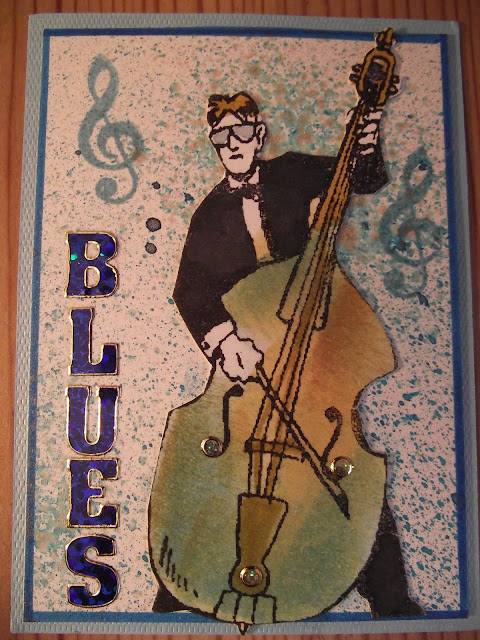 To mark the beginning of the summer (and some glorious weather!) and to provide observational drawings for my FMP, the family and I went to Wakehurst Place which has some fantastic gardens and a seed bank (although to be honest, I remember the seed bank being more interesting than it actually was- might have something to do with the fact it's a Sunday and not many people were working there).
Still, I managed to get some fab photos, not all completely related to my FMP project but I could tuck them away and use them later.
They also have some great sculptures- this one is by the very great Peter Randall-Page ( I have vivid memories of studying his work in GCSE art and having to carve out a bar of soap- took ages!!!! Then again, I was using a skewer....). 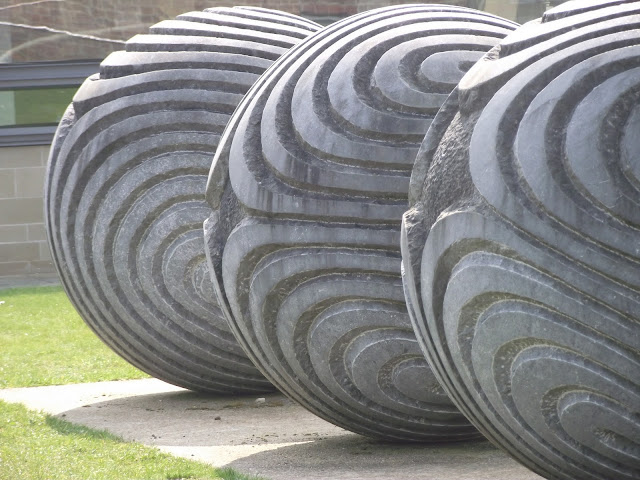 Here are a few of my favourite photos of the day! 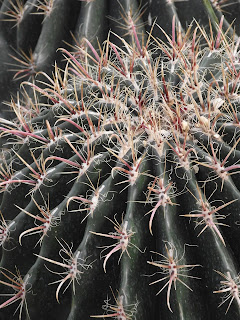 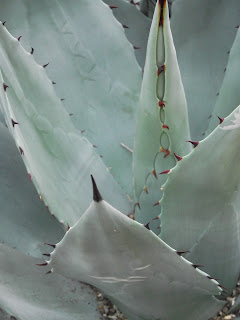 Macro shots of different cacti- I particularly like the one on the left as it looks like it has little flowers all over it. 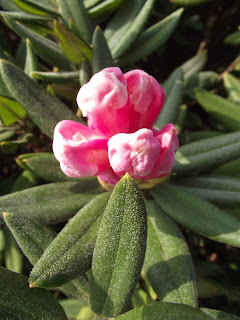 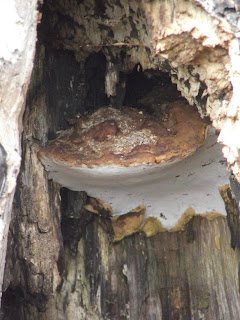 ﻿Rohdodendron buds (which look a bit like candyfloss or chewed bubblegum...nice) and some fungi that was hidden inside a hollow tree. 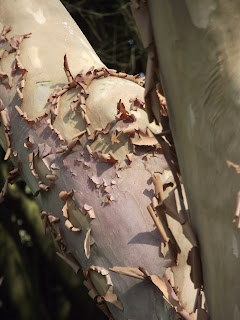 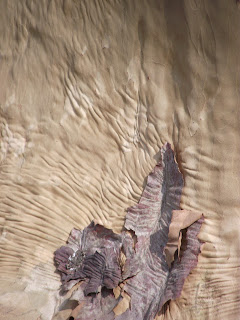 Some macro shots of this amazing tree bark- both images are from the same tree! At the top it was all flaking off like wet wallpaper, and at the bottom it was all wrinkly! Reminds me of skin a bit, don't know about you? 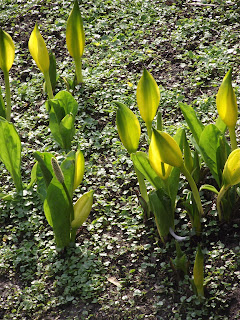 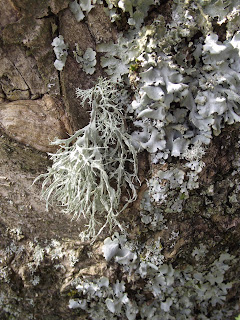 And finally (for today at least- there were loads more!!!) some very pretty flowers whose name I can't remember and some lichen growing on a tree.

So hope you enjoyed my little photographic trip to Wakehurst Place- now I have to try and draw some of them in my sketchbook!!!
Posted by Beth at 11:56 No comments:

Well, I did warn you that I was going to be very busy- in fact, I only have time to do this today because the teachers are striking over their pensions and the college has been shut for the day.
I have now begun my final major project!!!! It's all about rain forests and jungles, so I have been looking at images and issues concerning them, moved onto a huge colour thing (decided on my colour theme of vivid greens and 'hot colours'), done some research into artists, especially Ruth Lee who does all sorts of fab knitting and has even written a book about it! (Contemporary Knitting for Textile Artists) and am now moving onto experiments with materials and processes.
Knitting is going to be a big thing in my final piece- which I would like to be a huge walk through installation which sort of transports you to another place- although I would also like to learn how to crochet, make rag rugs, shibori and any other textile process that I might come across. Recently I have tried knitting with wire and beads which produced quite an interesting result, also circular weaving with beads, knitting with circular needles to produce a long trunk thing- an ongoing and incredibly long process, obviously I need to learn to knit faster! And also made my own knitting frame using pencils and masking tape which is going quite well I think... 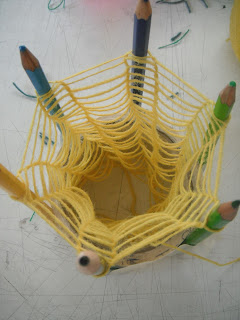 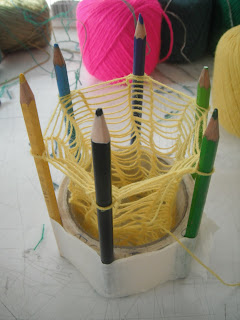 My tutor Wendy said that she would show me how to use the glass kiln so I have a load of experiments for that to do- I had a snoop around the 3D room the other day, and one of the girls has done this amazing tactile piece where she has supported a square of chicken wire in the kiln, then laid a sheet of glass on the top so that it melted through the wire, producing this sort of reversed honeycomb effect. I want to do the same sort of thing but try knitting with wire first-- ooo its so exciting!!! :D
Posted by Beth at 04:55 No comments:

Following on from my Eclectic project, I have been experimenting with movement of the weaves, dipping them in Paverpol and twisting them as they dried so that they keep their shape. Please note- these photos aren't blurred, they're moving! :D 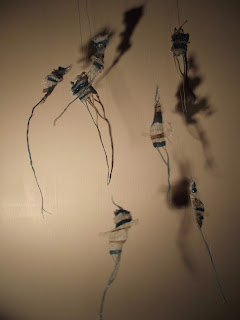 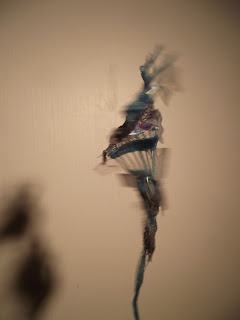 The shadows also cast a very interesting shape as I discovered... 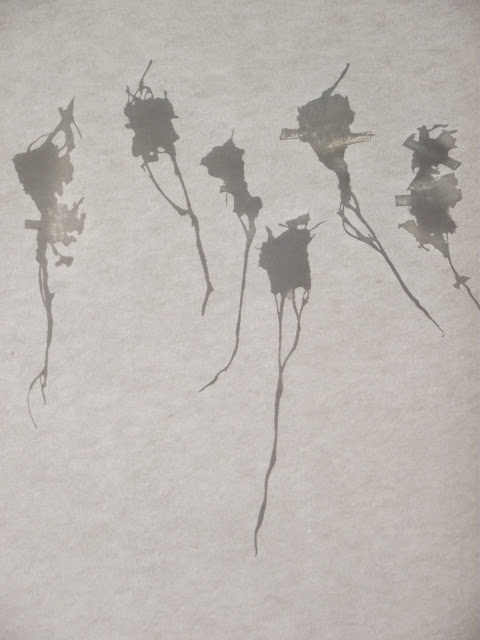 And finally, I tried using wire as the warp thread (read below blog entry for a definition) and then had great fun twisting it into different shapes for my photo shoot... 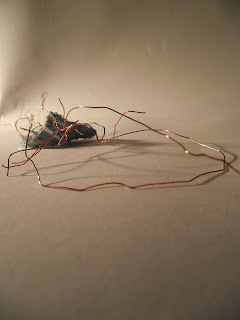 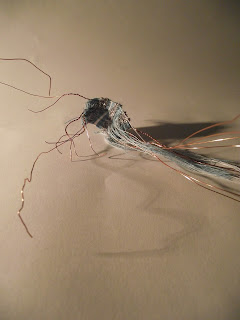 On a side note- I have been accepted into De Montfort University in Leceister with an unconditional offer!!! Yay!!!!  And I am hosting my first ATC swap entitled 'Tangled in a Fish Net' so I'll keep you posted on that. Plus(!) I am starting my final major project next week so it is all go in the Power household!!!
Posted by Beth at 12:29 No comments:

At college we have started a new project (the last one before our final major!!) which began as a collection of random objects/things. We had to find a toy, a postcard from a foreign country and a piece of prose then brainstorm them and come up with an overall theme. It sounds easy, until you look at the objects I picked out (not knowing we had to link them).
A toy racing bat, bought as a novelty game one Halloween 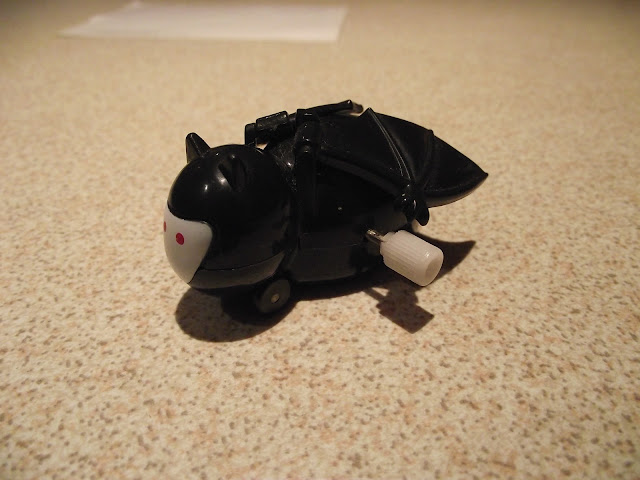 A postcard from Antiparos in Greece (gorgeous place if you have never been there. I went in the summer last year and it was fantastic!) 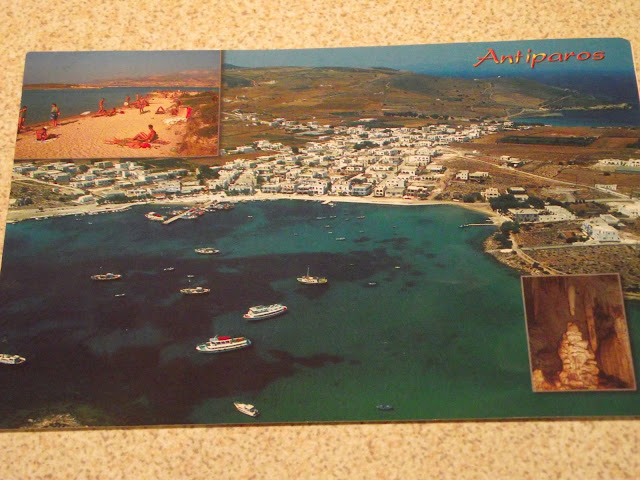 And a small section from a 'Little Old Mrs Pepperpot' book I had as a kid.

I have to admit that I struggled to come up with a connection for these three things- as did most people I think. I eventually came up with an idea of fantasy and magic. The racing bat is for Halloween which is a time of witches and magic spells, Greece has its Greek Gods and the islands themselves are quite magical to visit, and finally Mrs Pepperpot (for those of you who don't know) randomly shrinks to the size of a fairy.

We only had a week to do this project so I dived straight in, looking at photographers like Annie Leibovitz who has done fantastic Disney photo shoots using celebrities as characters from the films. (Click here for her latest photos, and here for her earlier images.) And also at images of fairies and other magical things/beings.
I decided I wanted to do some weaving so started experimenting with different wools- the normal wools were quite clumpy and...well, woolly, whereas I wanted something more delicate. So I changed to using thinner threads, clear nylon thread and strips of plastic. Much more dainty and delicate. 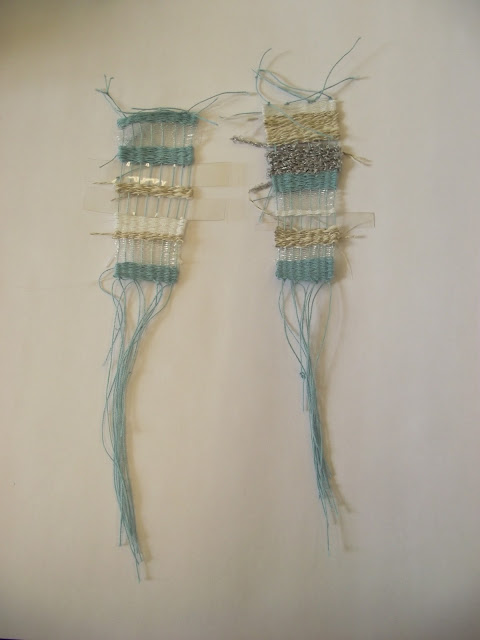 I also looked at images with stardust and magic fairy sparkles, and was inspired to start using beads in my weaves, experimenting with threading them onto the warp threads (the vertical ones) or the weft threads (the horizontal ones). I think I prefer the warp thread ones because it gives the weave more character- the threads have to adapt to go around the beads, whereas when on the weft threads, the beads just sit on top of the weave and aren't really integrated into it. 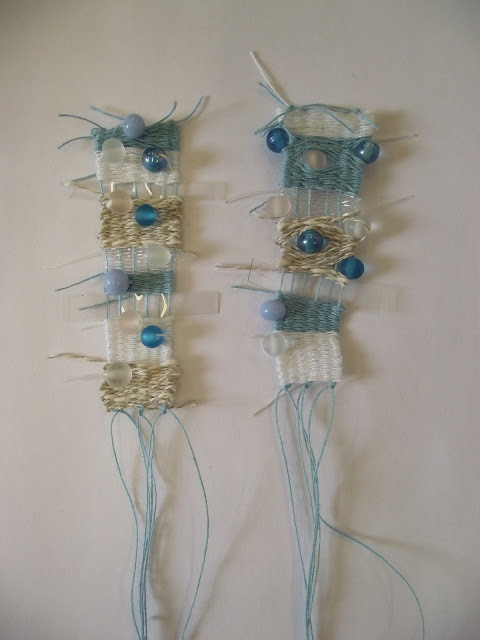 And finally, to complete my little experiments, I decided to try and bring in a looping technique which involves looping the weft thread over an object (like a pencil) whilst weaving across. Depending on the size of the object you are weaving over, you can make the loops different sizes- I also tried a weave which involved threading beads onto the weft thread as it was being looped over. I think though, that it would have more impact if the rows of beaded loops were further apart so that they weren't all jumbled up so much. Plus it sort of brought back the woolly-ness so I don't think I will use them again. 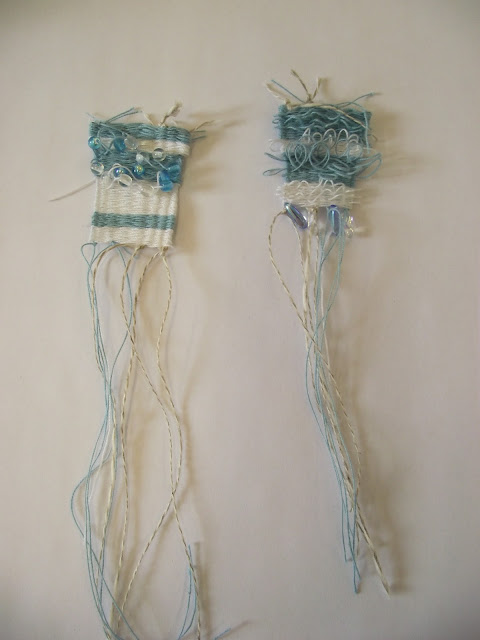 There is still a way to go for this project though I think. I'm rather liking the long tails left behind- they give a great impression of movement, so maybe I could try fixing them somehow in a spiral shape. Possibly weaving using wire as the warp threads or using Paverpol/glue to fix the weaves in place.

I don't know if any of you have seen it, but in Brighton by St Peter's Church, there is a skateboard and bike park, next to this park there is a tree- covered in shoes!!!!
It's fascinating! All kinds of shoes (although all with laces otherwise they wouldn't stay there) are just hanging there, all with their own backgrounds and histories... 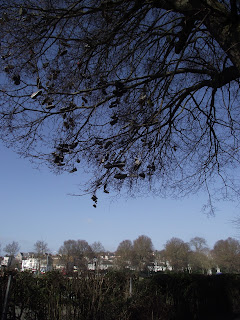 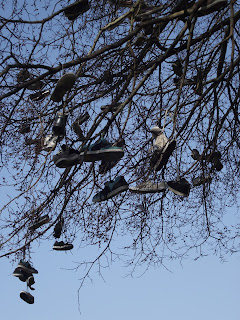 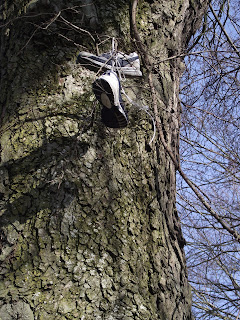 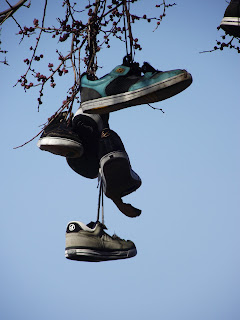