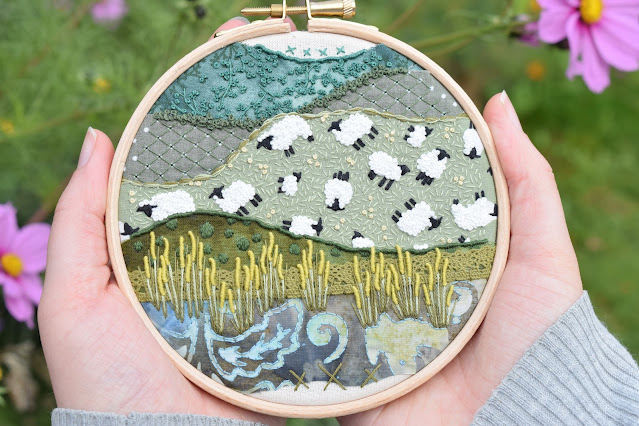 It's finished!! This feels like completing a marathon because, even though it's only 12cm, this piece has taken me ages!! There's just been so much going on with additions to my routine, changes to my (almost) normal routine, a head cold (not the C-virus), darkening evenings, stress at work....its all been a bit much really and by the time I get home again I just want to veg out and forget about everything that's on my various to do lists. Sewing took a back burner these last two weeks and so the re-designing of my Woollydale kits took a back burner along with it. 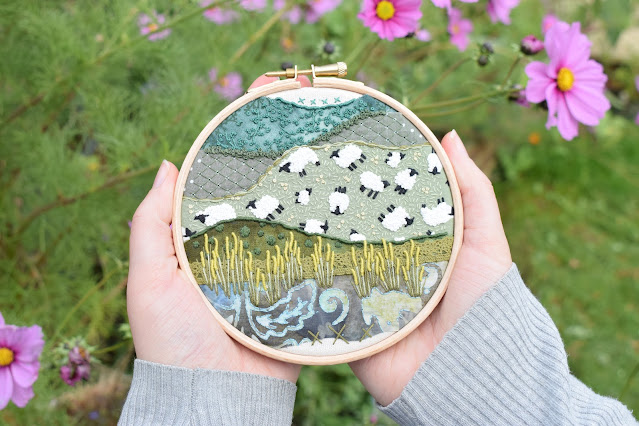 But I've persevered and this is the first of TWO new Woollydale kit designs! I don't think I've written about it on here but sadly I can no longer source three of the original Woollydale fabrics and I've completely run out of one of them. I tried to substitute it with fabric of the same design but in a different colour (the top one used here) but it just wasn't working and in the end I decided to make two new kits; this little one which uses up the rest of the fabrics that I have left, so will be a limited edition, and another 15cm one using all mostly new fabrics or ones I can get hold of easily. 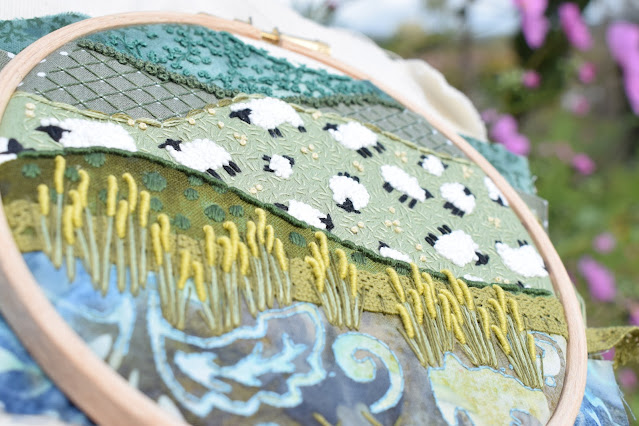 I love this little one, it has the same sheep pattern as the original Woollydale (see here) but with an olive green background rather than the bright green so it's like a slightly washed out version of before. The clouds have passed over the sun and perhaps a little mist has wound it's way into the Dales. The sheep don't seem to mind however and are still merrily rolling around in the grass. 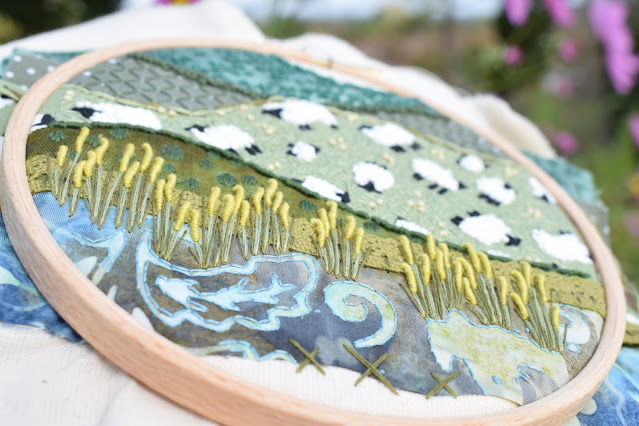 Where the fabrics have been recycled I have tried to keep the same threads and stitches to reduce the work for myself in re-writing the booklet as I really want to get this one out as fast as possible. Woollydale was my all time top best seller and my online shops are suffering somewhat without it being in there. Ideally I'd like to have released both of these kits by mid-November at the latest but we'll see how it goes.

Regardless of my recycling, this one uses some new colours as well as slightly new ideas. There's a few DMC stranded threads that have crept in so it will be a mixture of Anchor and DMC and I think I will include the hoop in this kit as it will fit nicely within my cellophane packaging. 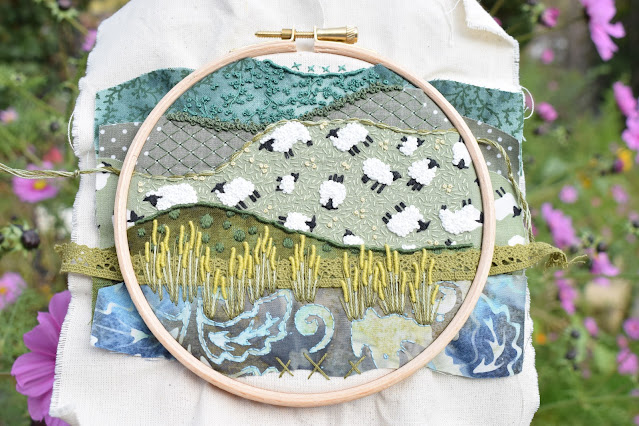 There are a LOT of french knots in this one! There are knots in the sheep, knots in the daisies, knots on the border, knots in the top hill...I considered adding knots underneath the reeds as well but restrained myself at the last minute. With all of these knots I think I'm going to have to write a french knot troubleshooter like I have for the bullion knots, in case anyone gets stuck. 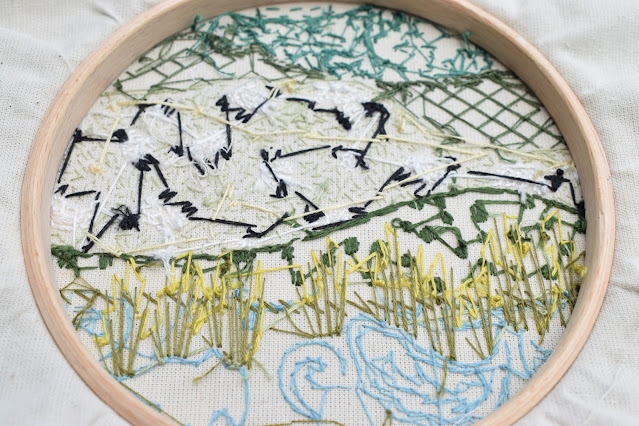 The backs of the hoops designed as kits are always a little messy as I change my mind when going along and rush around, carrying threads across the back with gay abandon. If you follow me on Instagram (and frankly, why wouldn't you? It's @power.beth if you don't!) you'll have seen my bullion knot reed colour dilemma. I'd initially started making the bullion knots at the bottom of the piece in yellow DMC thread but as I was going along it was making me feel more and more uncomfortable. The yellow didn't add to the piece, didn't stand out as being at the front and was just getting lost among the sheep. I reverted back to the green Anchor thread that these reeds had been in the original Woollydale, which I hadn't initially thought would work because the whole hoop is a much darker green, and made a little test patch at the other end which just looked so much better! It goes with the slight zesty green splashes in the blue batik fabric as well so the yellow reed knots were all cut off to make way for a bank of bright green. 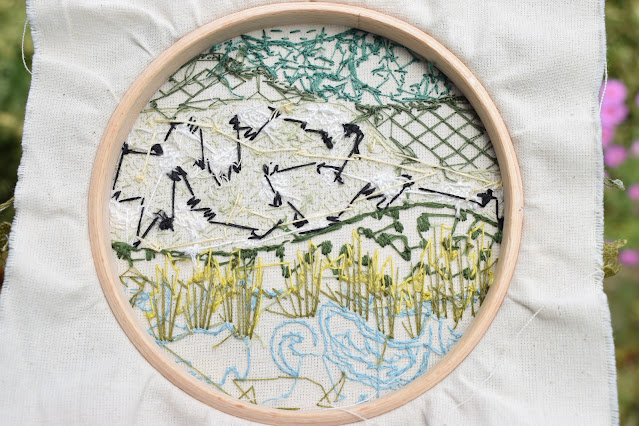 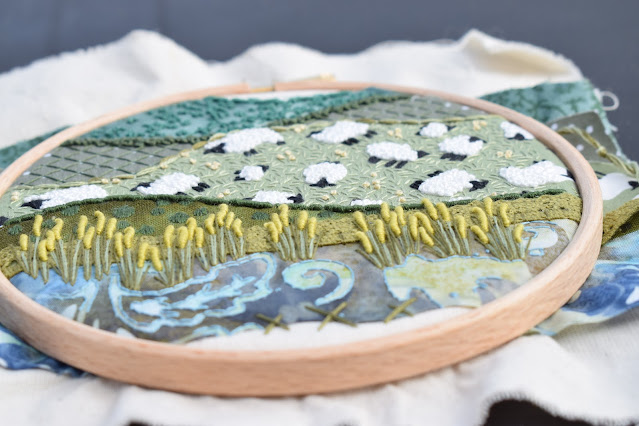 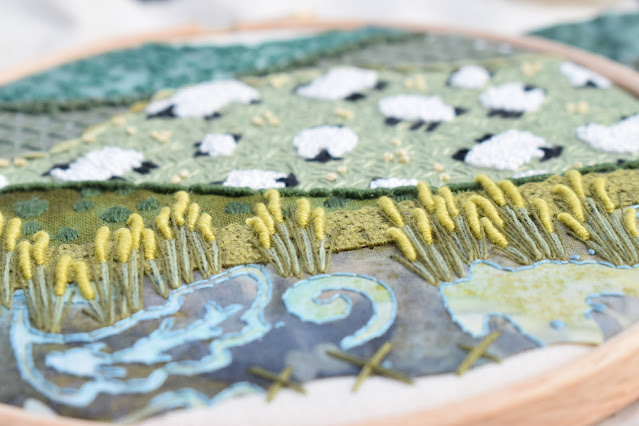 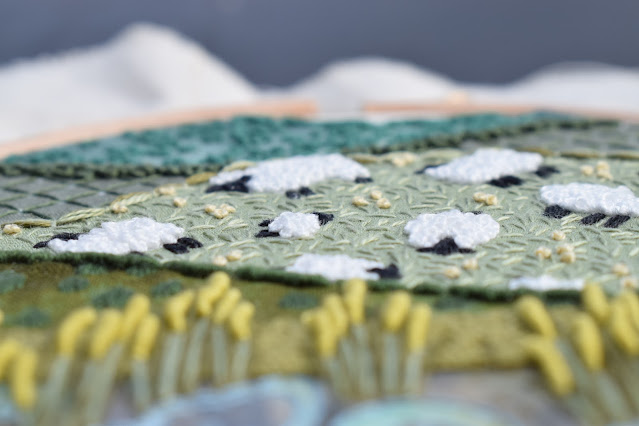 I did end up using the yellow though, to just fill in some of the gaps between the sheep and add a little bit of prettiness with some yellow daisies, or maybe buttercups? It's not wild, just a gentle sprinkling for the sheep to frolic in. 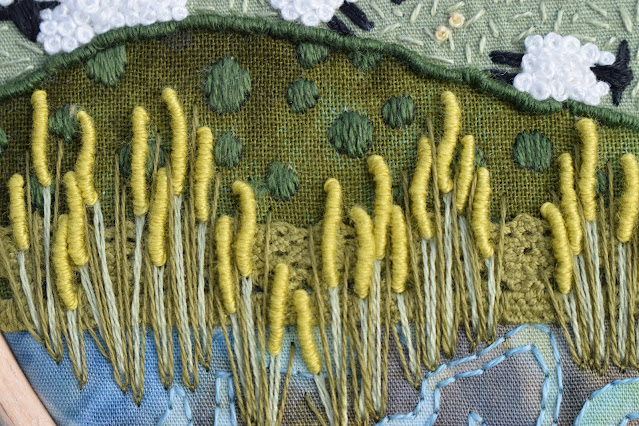 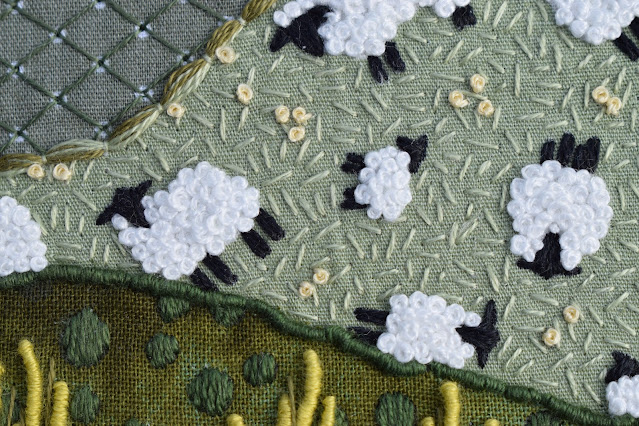 The Woollydale kit family really focuses on the greens and it is still inspired by my holidays to Yorkshire where your breath can literally be taken away by the range of greens that confront you around every corner. Each roll of the hill has a slightly different shade and texture and it's a constantly changing palette as the sun rolls around and clouds cast their shadows and play with making funny shapes in the fields. I love the way it changes through the seasons as well, so bright and fresh and new in the Spring, literally glowing neon when the sun hits it in the early mornings, to a deep, happy and contented green in the Summer, fading to a slightly crispy, mature and diminished green in the Autumn where it is overtaken by the flaming oranges. In winter its deep and velvety, shiny and lustrous with the holly and ivy. At this point green doesn't have to work hard to make us happy and distract us from the grey gloom outside so a dark green will do. It's a fascinating, multifaceted colour and I love working with it. 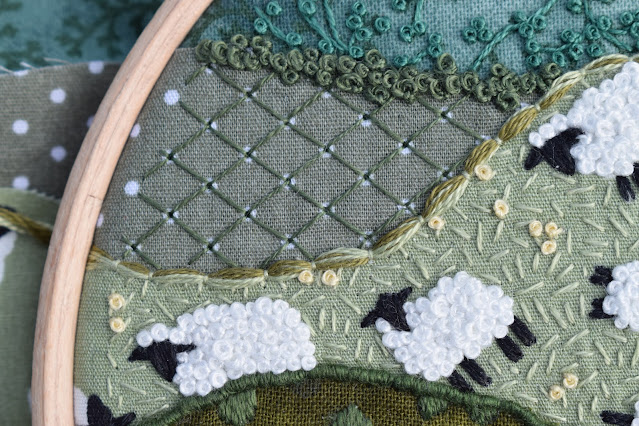 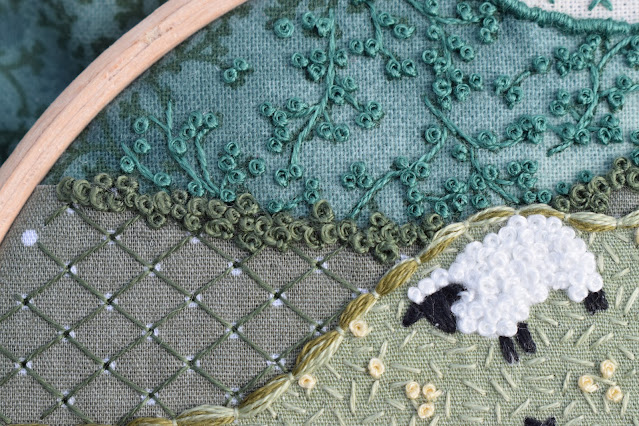 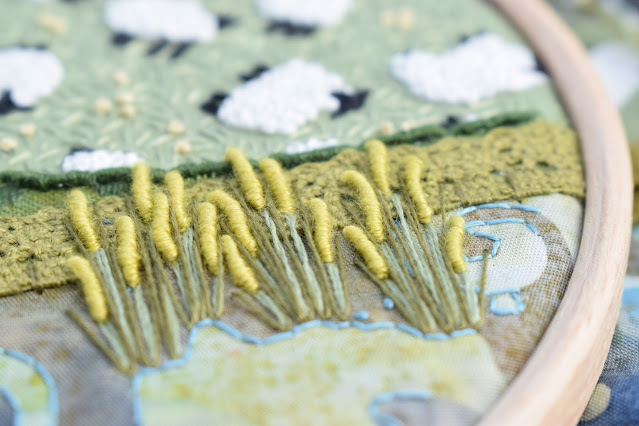 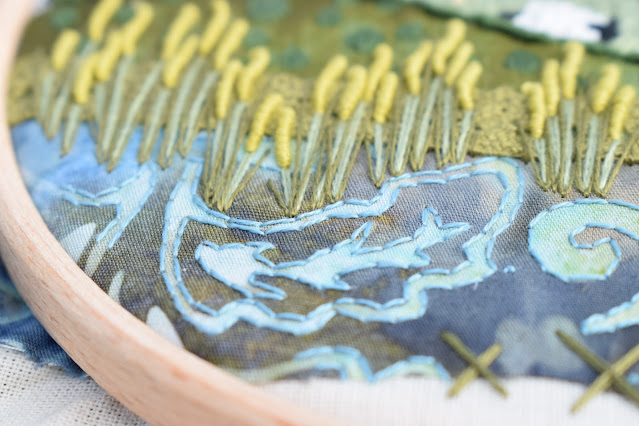 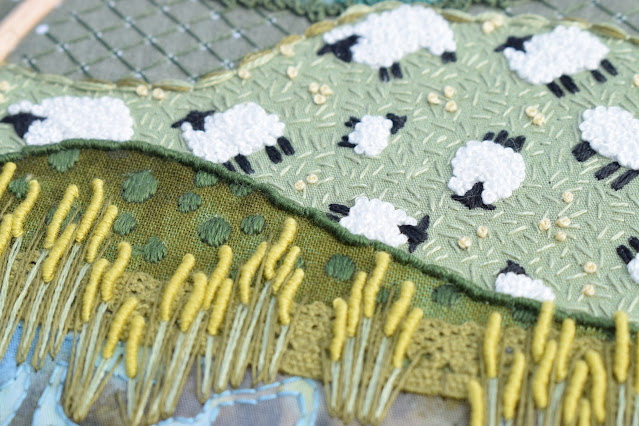 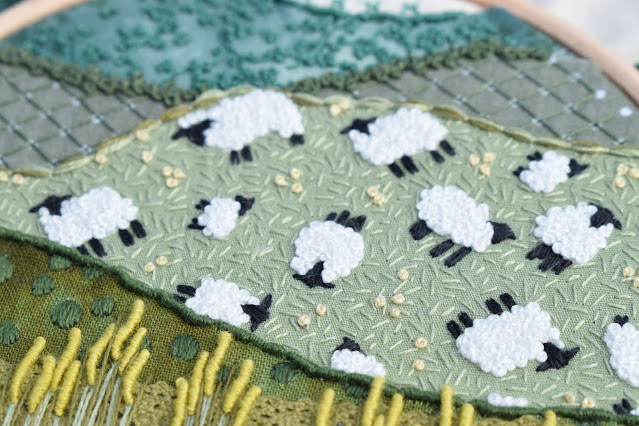 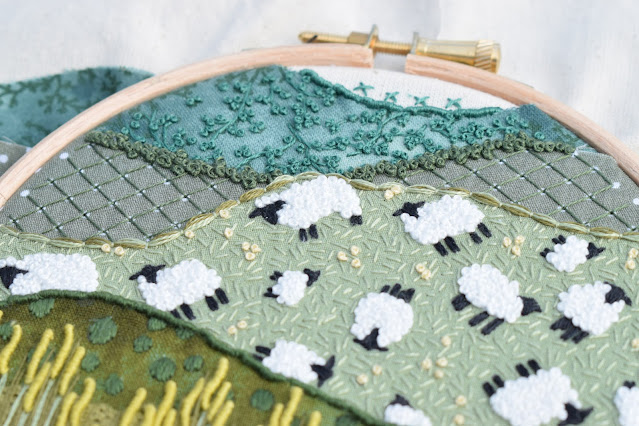 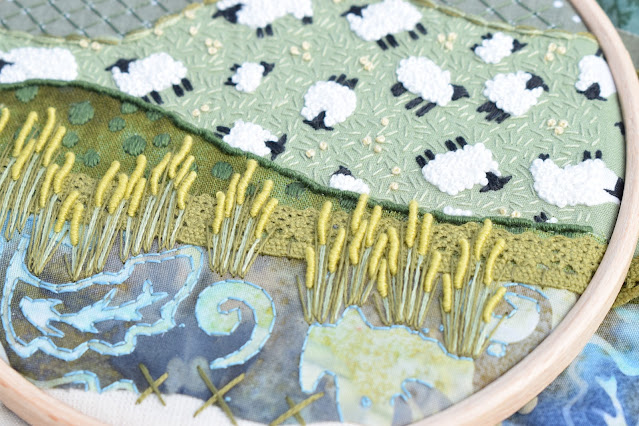 This will still be a kit that 'scapers can make their own, and I think it will work well alongside the previous Woollydale if you wanted to have another round of sheep stitching. As before, the placement of the reed stems is completely up to you and dictated a little bit by the positioning of the batik fabric, which will be a different cut for everyone. The sheep, although templates will be provided, may need to be reworked and cut slightly differently to avoid giving one of them too close of a shave and there are loads of ways you can really make this kit your own. I'm always excited by the possibilities and look forwards to getting photos through of what people have made and how they've changed it to suit their preferences. 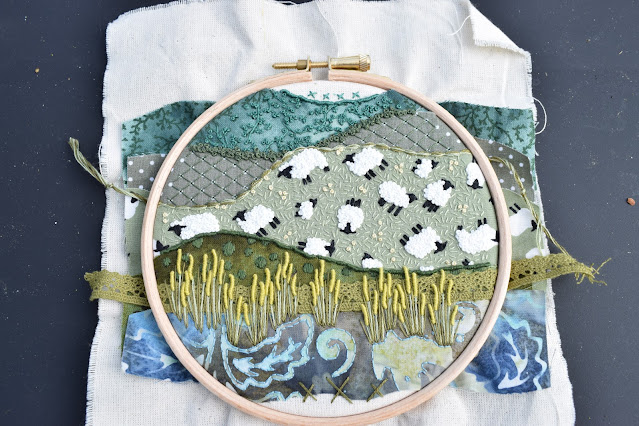 Just need to write it all up in the book, sort out the templates, redraw my diagrams, check it all, get it printed, cut the fabrics, make the thread cards and compile it all together, then photograph the kit and start advertising it on Etsy and my new website shop. Did I mention my new website shop? Why not pop over to my website and have a look?! 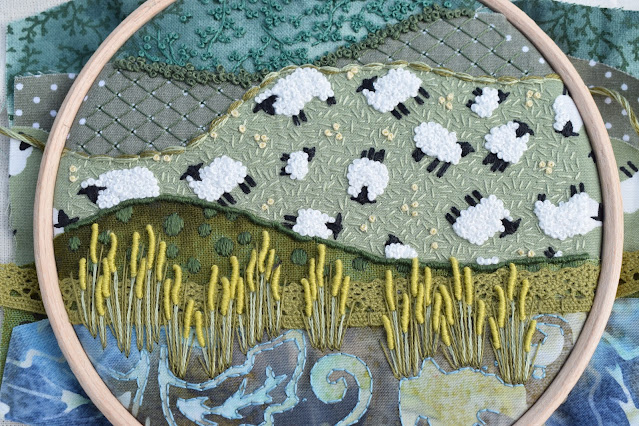