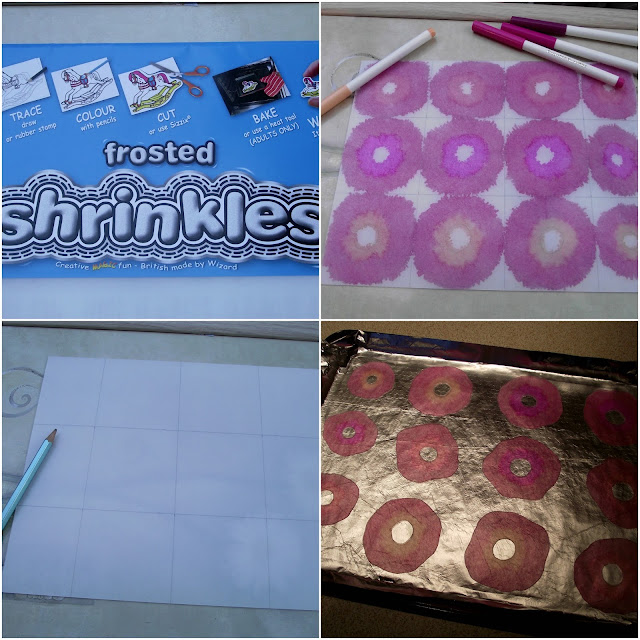 I have kind of sneaked this stitchscape in under the radar a little bit. It was started after my fabric stash sorting last weekend, and I had a strong mental vision of what this 'scape would look like. It is completely inspired by Hollyhocks, which are beautiful, tall stemmed flowers with large blooms in a variety of colours. I also knew exactly what these flowers were going to be made out of.... Shrinkles!!
I used frosted Shrinkles, although they can also come in clear or in black, and I bought mine here, but obviously you can get them in a variety of other craft places in different pack sizes.
The idea is that the sheets are made of a certain type of plastic, which, when heated in the oven, shrink! Any colours you put on the sheet to decorate it become stronger and more vivid (even pencil lines so watch out here), and once shrunk, the plastic will also be a lot thicker so you can use it for anything you can think of!
I wanted to create my own Hollyhock sequins, so sectioned my page into 7cm squares, then filled each square with my shape and a smaller circle in the centre to be cut out. Using felt tip pens I coloured in the circles, creating a kind of gradient effect with my colours- at this point the plastic sheet is thin enough to cut with scissors, although it isn't the easiest thing to cut central circles out of! They go on a baking tray lined with silver foil, in a fan oven at 175c for a few minutes. If you have an oven with a window you can watch the plastic start to curl and dance on the tray, and see it magically shrink! Once the pieces have stopped moving and are once again lying flat, you can remove from the oven and wait to cool. 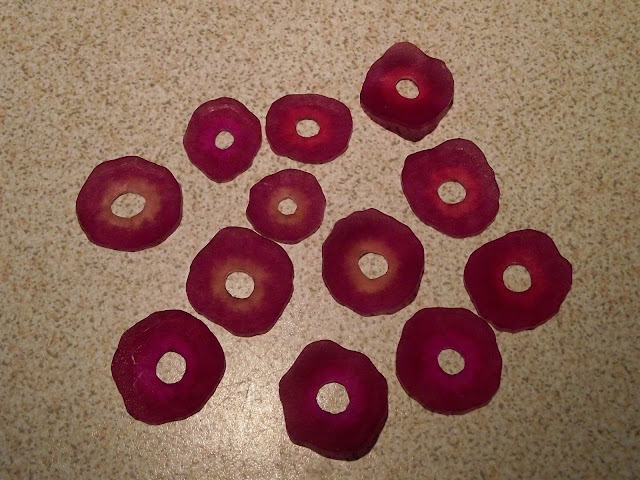 I also tried another page sectioned off into 5cm squares to make some slightly smaller flowers, and once these had been removed from the oven I bent them slightly to make cup shapes whilst they were still hot- not recommended I should point out, as you do burn your fingers! 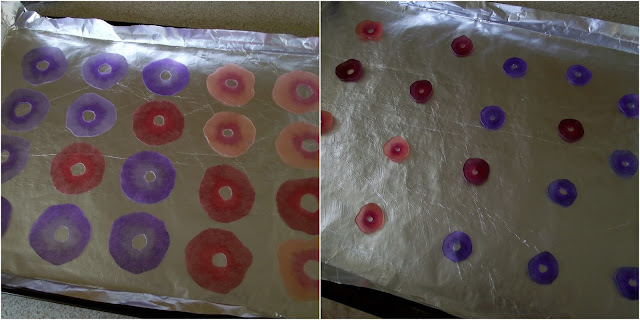 I didn't take any photos of the process of this stitchscape on my camera, although you may have seen some photos popping up across Facebook and Instagram. To the background layers I added my usual stitching, with layers of running stitch, cross stitch, back stitch, seed stitch, french knots and bullion knots, filling in the layers as the whim took me. 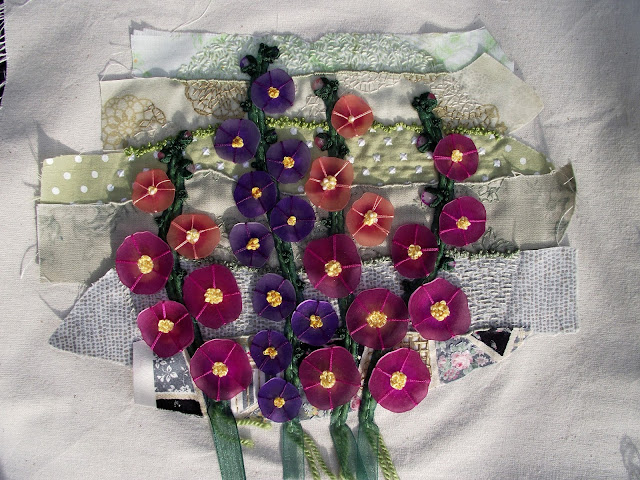 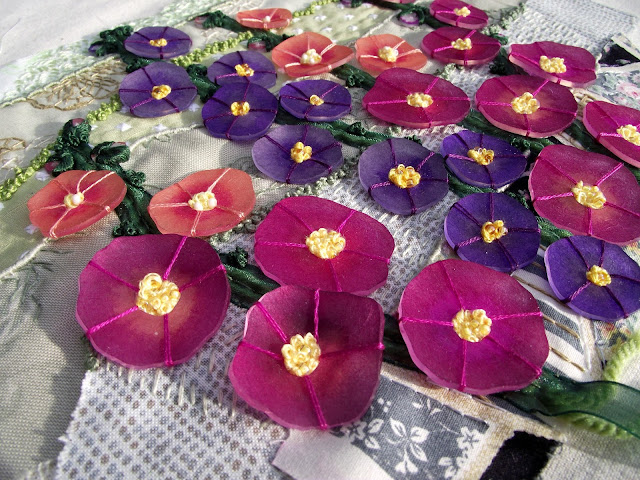 To make the stems I couched two strands of Stylecraft Special DK acrylic yarn, and then layered over some organza ribbon, just catching the edges to secure the sides before stitching a row of back stitch all the way down the ribbon between the two strands of wool to create a kind of quilted stem look. 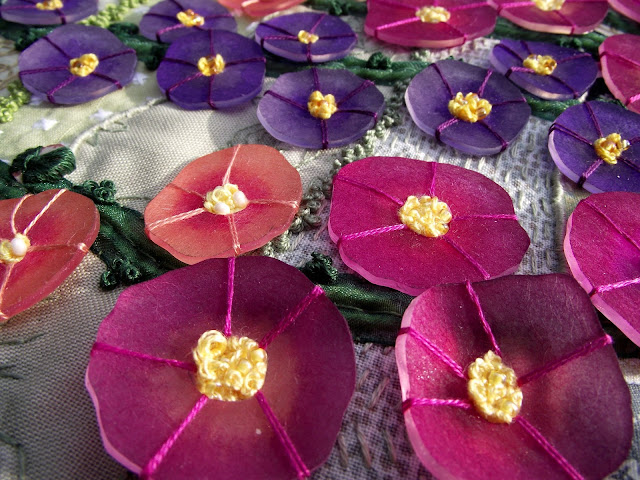 The flowers have been stitched down in the same way I would a sequin, coming up with matching thread through the middle and around the outside, creating an illusion of the different individual petals. Once these were secured, I filled the centres with french knots and tiny matching yellow beads. 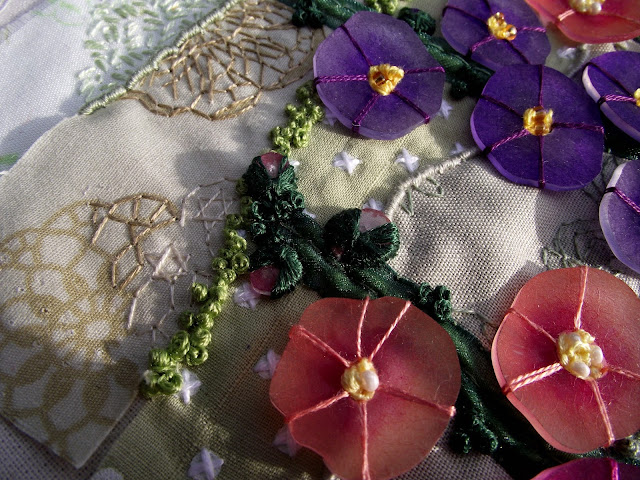 The buds at the top of the stems are actually the cut out holes from the middle of the Shrinkle sequins which I had the brainwave of shrinking down as well. These have been secured with green stitches holding them down and creating the green leaf part of the bud, and I have added green french knots around these to help bed them in to the stem. 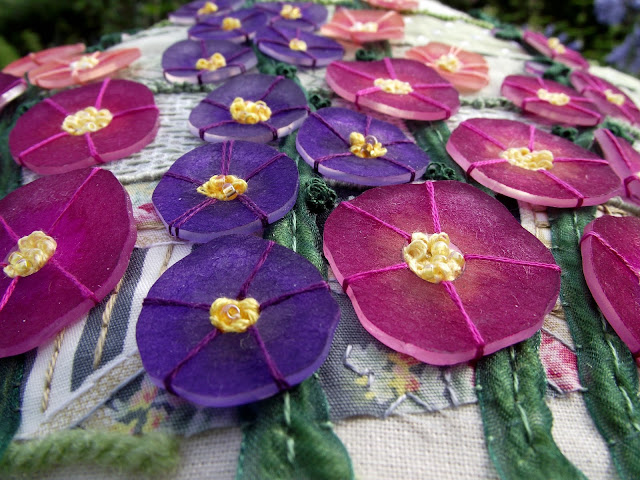 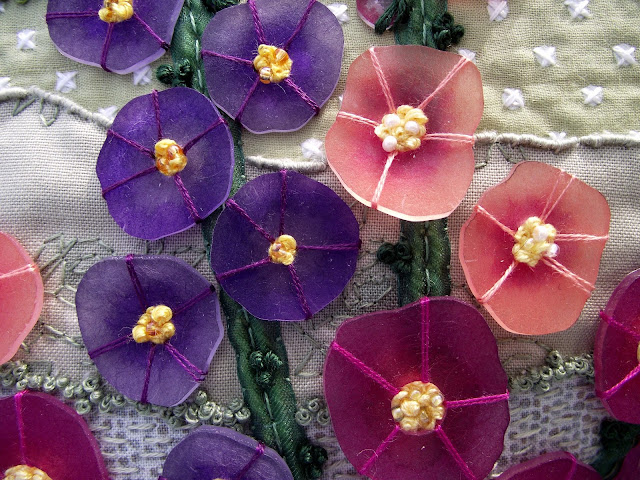 As The Mother pointed out, it is a much more mixed media way of working, which is something I haven't really explored so much in these stitchscapes so far- but I do have several sheets of Shrinkles left so watch this space!! There could be more coming this way. 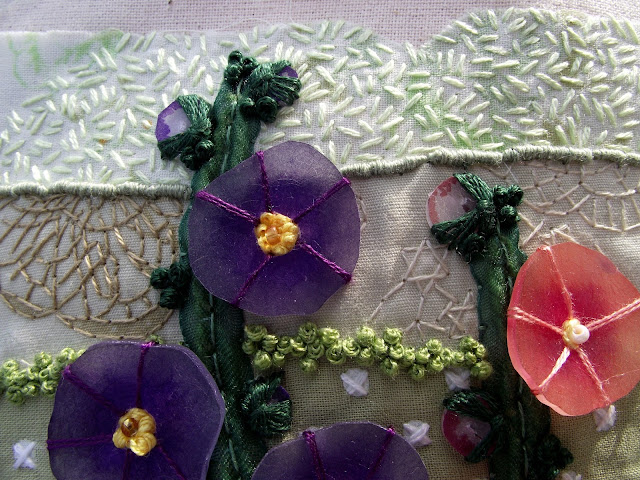 I really like the vibrancy of these flowers, it is exactly what I imagined in my head when the thought first popped in- and I have also been referring to images of Hollyhocks for this one to make sure I'm on the right track. I am especially pleased with the little details here, the background is pale and unassuming, leaving all of the talking to the flowers, but I have still treated each layer with its own sprinkle of stitches and there is a lot to take in. Mid way through the layers there are some printed roses which have been followed with delicate layers of back stitch, treated in much the same way as the floral lacy shapes nearer to the top. The Shrinkle flowers themselves aren't very detailed, their beauty is in the colour and the repetition, and with the addition of the beads, they have an added, unexpected sparkle to them which gives that special touch of sunlight. Imagine how these would translate into a print! 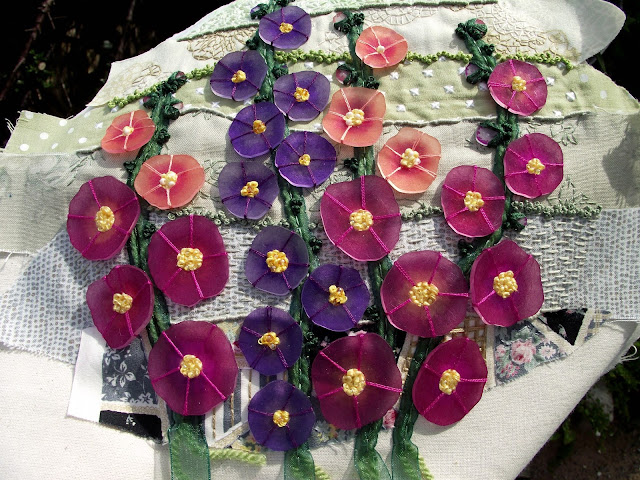