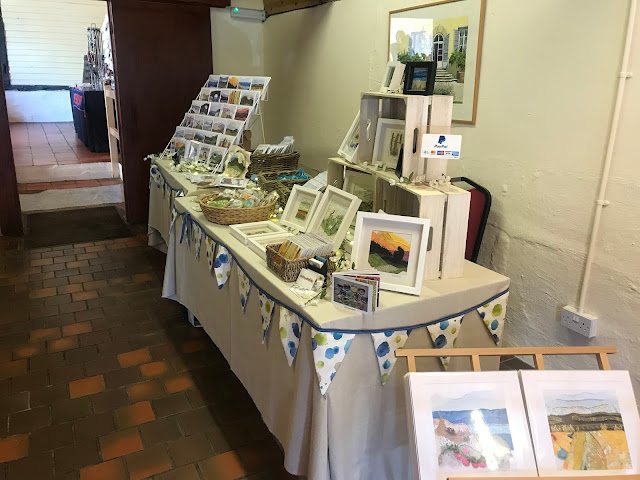 My most recent craft fair at Barnsgate Manor was of mixed success. I was really pleased with how my stall looked, and they were certainly generous with space!! Two whole tables to myself, plus an additional half table at the entrance as a sort of enticement of what's inside. I could have taken some more frames really as it looked slightly sparse to me. However, sadly, not many people came to the fair itself which may be in part because it was such a nice day and they all trundled down to the beach instead, but may also be because Barnsgate aren't particularly good at advertising the event. Working to bring up hype before an event is really crucial- especially now when people don't necessarily need to leave their homes to experience things. Online advertising is key but there wasn't a lot from the venue itself as reflected in the turnout really, which is a shame because it is a really lovely place to visit and they do a cracking cream tea. (I can vouch for the cakes!) 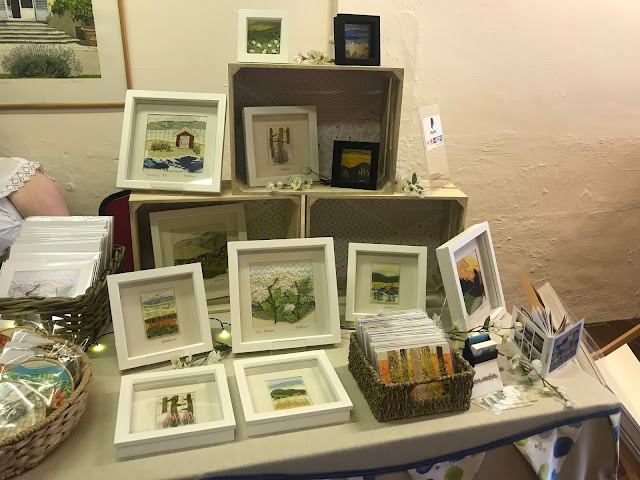 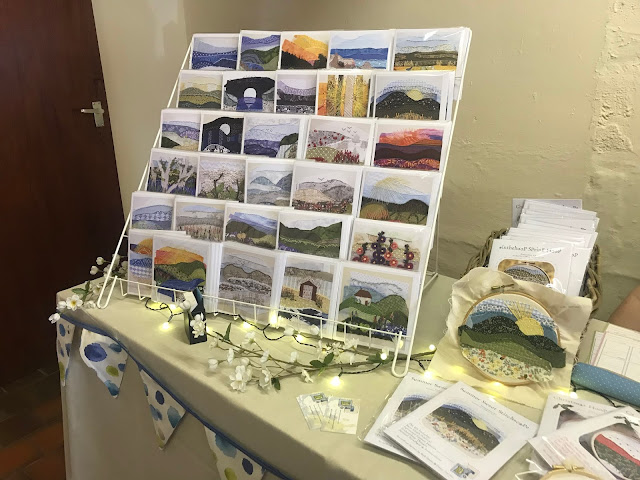 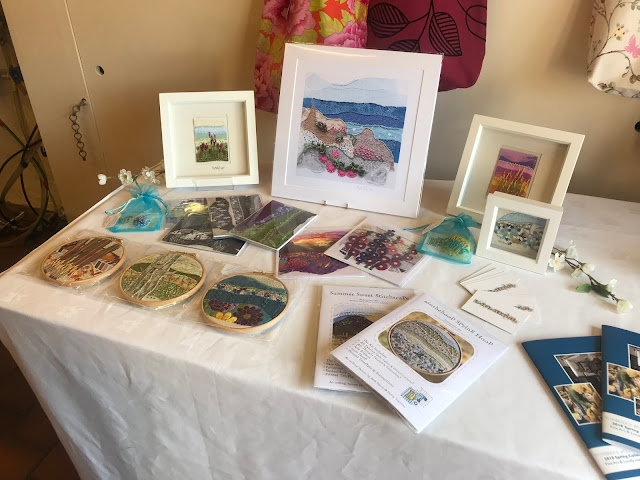 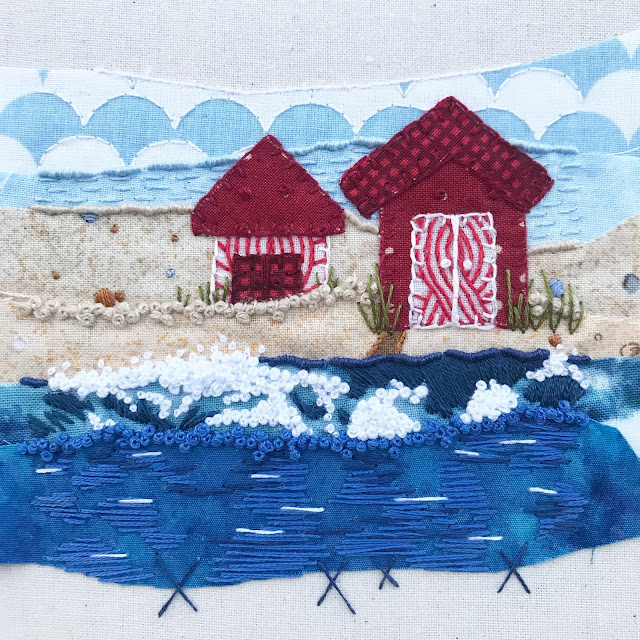 Still, in between chatting to the other vendors and the occasional customer, I managed to start two little stitchscapes which I intend to put into a 10cm white frame. The beach huts one I have since finished and is now framed, but I am still working on the other which is muted green mountains. I really love the cheerful little red huts against the sand and blue frothy waves. It is a simple little piece but quite effective I think. The top layer has simple rows of single strand back stitch, with a whip stitch to the top, the plain blue layer has running stitch just to give it some texture. I now have two different sand print fabrics, as mentioned in a previous post. The top one is pebbles only and I've followed these with some little satin stitches and tiny french knots. The lower sandy layer is the print with feet in although there is only a bit of it in front of the larger hut, the rest of that layer I have left pretty much blank other than the french knots to the top. Around the edges of the beach huts I have worked blanket stitch, with french knots inside the polka dots, and whipped back stitch in the corded pattern. One of my favourite parts of the piece is the fly stitch green wispy stems, there is something about adding just a splash of greenery to a seaside 'scape to really bring it to life! 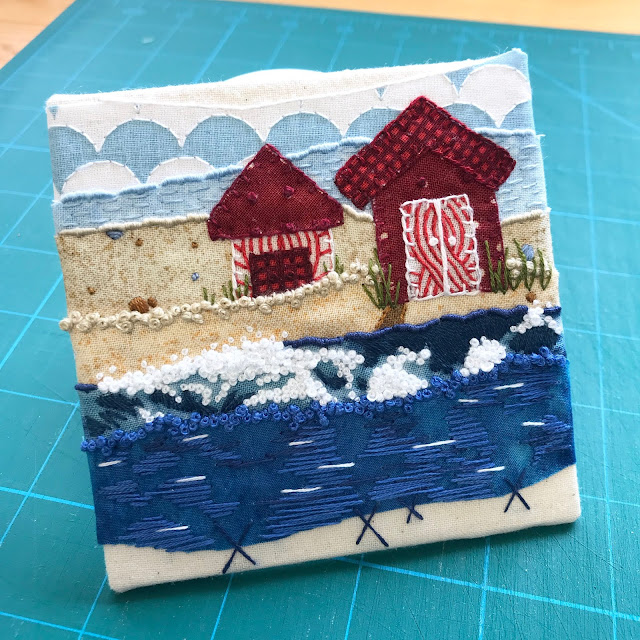 The waves are a mixture of satin stitches, french knots and straight stitches. I have also played with my bullion knots for the top layer, couching them down into a slight 'v' shape so they look a little more like waves. They are so cute! Don't you think? 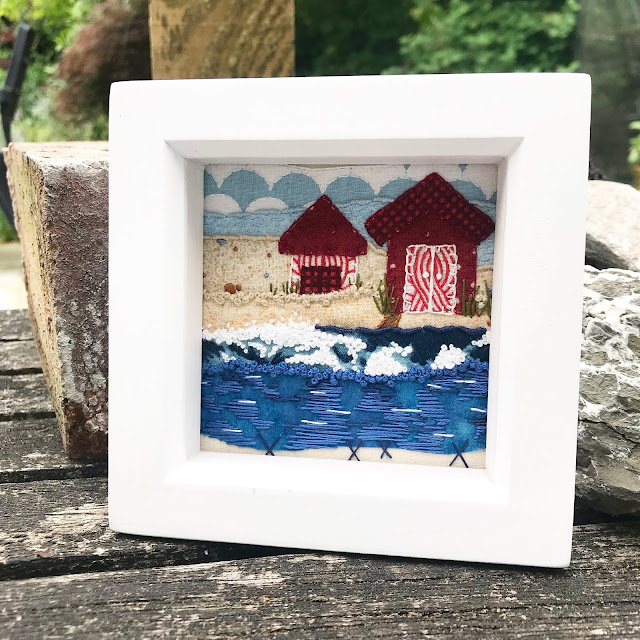 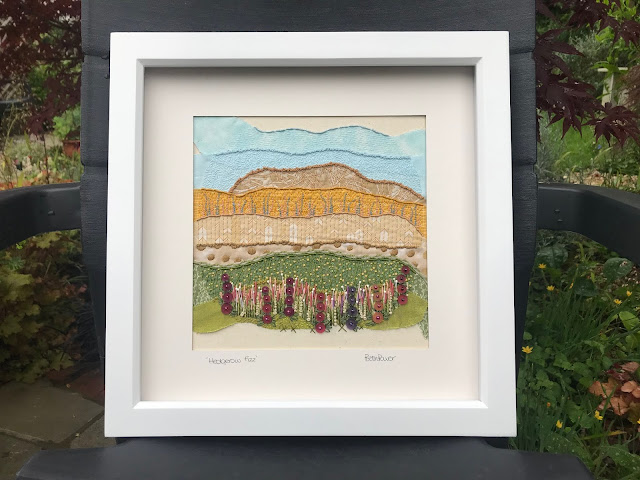 In the studio last week I also managed to frame up my Hedgerow Fizz stitchscape, and hopefully prints and greetings cards of this one and a couple of others will be printed from tomorrow, ready for the Bridge Arts in Uckfield event happening next weekend. I am hosting a mini little workshop on the Saturday- just 45 minutes to create something little and pretty. I plan over the weekend to make up little packs, a bit like my Naked Stitchscape kits, that people can choose their colour selection from rather than being faced with a basket of jumbled fabrics, in the hope that it will speed up the sewing process. 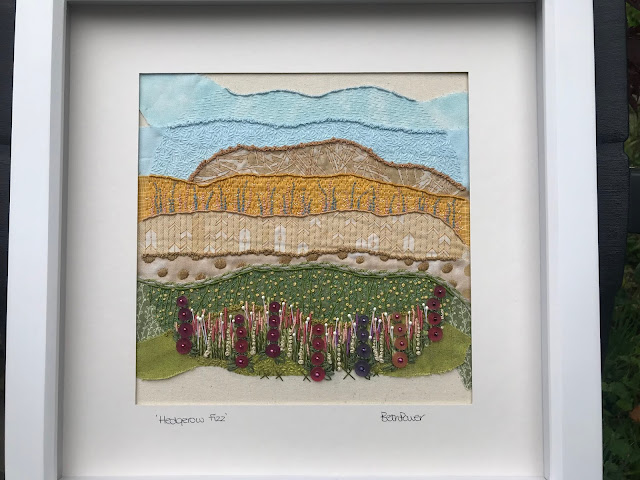 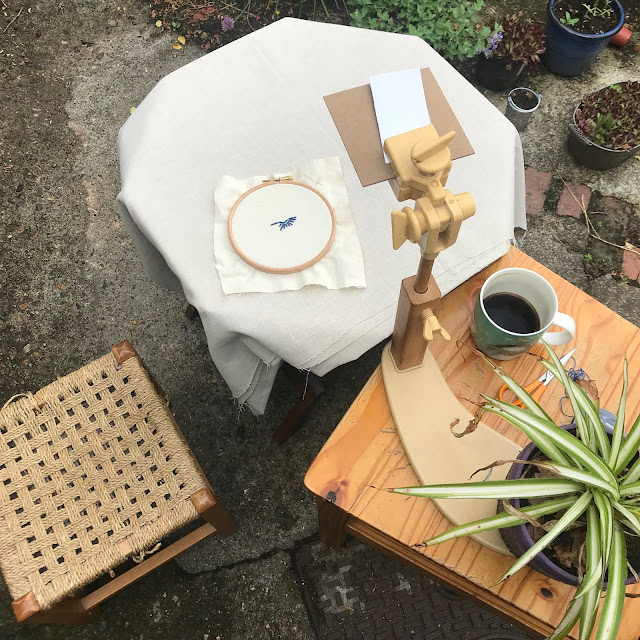 I got a little above myself last week and came over all enthusiastic about filming myself stitching!! Whilst in the flow of things I also managed to start a Dotty Textiles YouTube channel where you can see me (and hear me) explaining how to make some of my favourite stitches. I will add to it when I get more time, but for now you can learn about French knots, bullion knots, back stitch, whipped back stitch, fly stitch and detached chain stitch. You're welcome. Maybe. It isn't very glamorous and I felt very odd sitting in the garden with my less than Hollywood filming set up, talking to myself.

I hope you don't mind my periodic rambles on here. I am enjoying these almost two weekly blog posts where I essentially just list everything that I've done since last posting. Some days I don't feel like I'm doing very much, and they can be quite disjointed, walking up to the studio to package an order, then down into town to post it, then back home again to carry on with various projects. The list of things I want to do is endless!
A couple of days ago I had my first stitchscape class at Closs & Hamblin, something that I am keen to do some more of as it went really well and most of them were quite advanced with some fabulous looking stitchscapes by the end of it. I had to make lots of example layouts which I've now got to actually stitch at some point, and I also started on some more complicated stitchscapes for which the ideas arrived at about three in the morning!! Windmills! I thought. That is the way forwards! Daft I know but I now have the basis for not only a large windmill themed piece, but also a lighthouse which I hope to start soon. 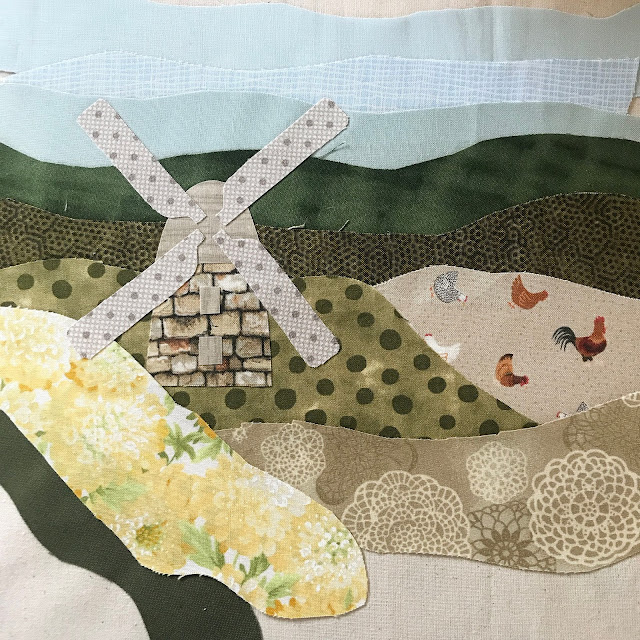