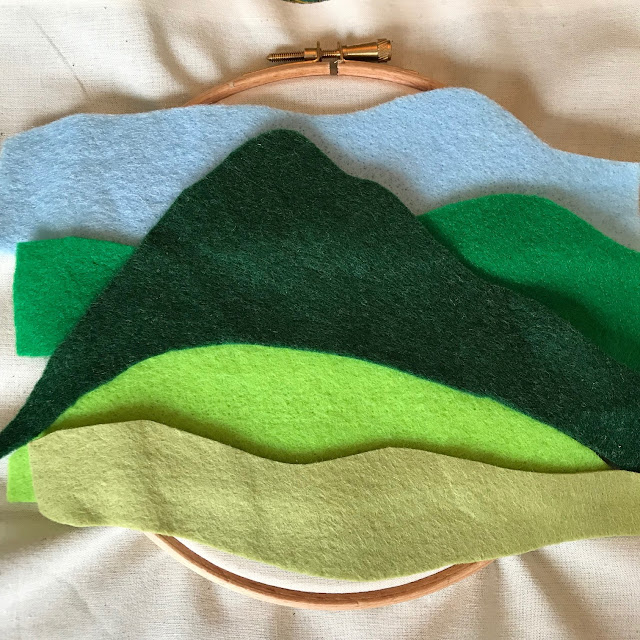 I've often thought about creating a project for small people. By which I mean people aged from about 7 upwards who are starting to be a little more precise in their creativity. As a guide leader (girls aged 10-14) I am always trying to come up with new creative projects for them to make; often involving hand sewing. The end results of these makes tend to be of mixed success, and it always amazes me that girls don't seem to know one end of a needle from the other. I spend most of my time tying knots or untying knots, threading needles, sorting out tangles or re-cutting a shape after the first few attempts have mangled the original piece of fabric or felt. I find it quite sad that around half of the girls can't seem to cut along a shaped line properly, or have never stitched anything before. We discovered quite recently that an amazing percentage of our girls (we have about 36 in our unit at the moment) had never done potato printing before and were totally bemused when I produced potatoes, knives and paint. 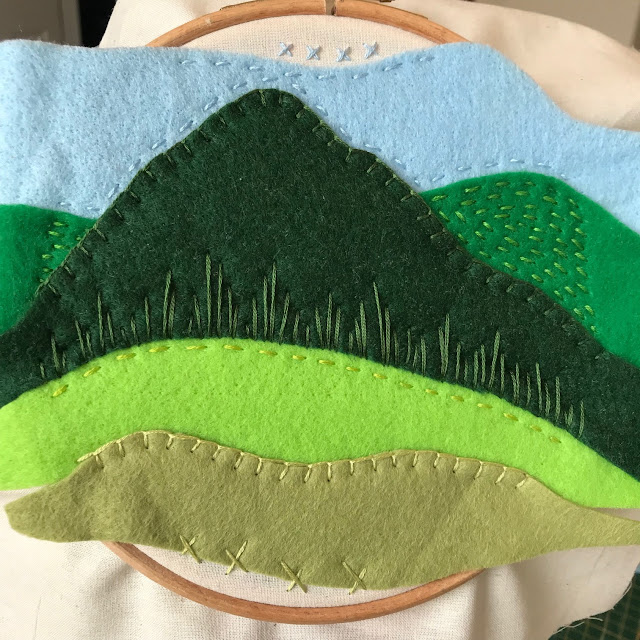 But at the end of these creative meetings are occasional little moments of elation, joy, success!! A feeling of pride that a girl has mastered a technique, made something fantastic and feels so great about it. They usually take my idea and run with it, ending up with something totally unique (involving aliens or pigs, or their cat) which is absolutely fine by me and fascinating to watch. 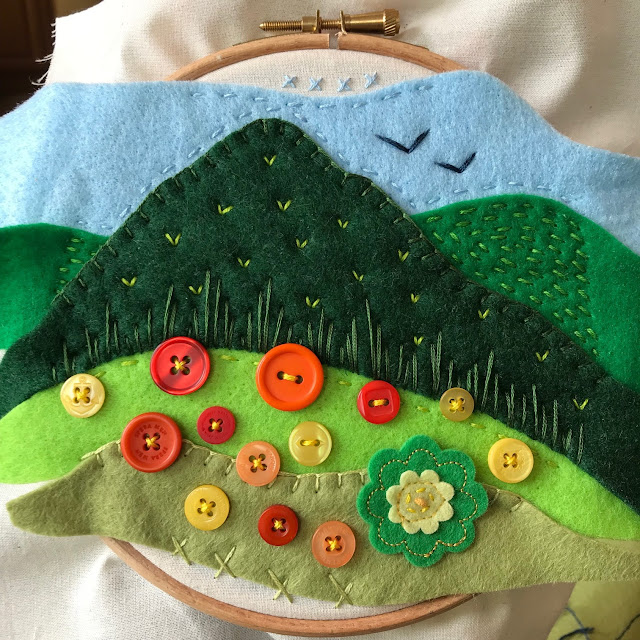 So, when I got chatting to one of the Brownie leaders (for girls aged 7-10) at a leader meeting a couple of months ago, she asked me whether I was able to offer a stitchscape workshop for children, which gave me precisely the sort of kick up the proverbials that I needed to push the idea out of my brain and into the hoop.
My immediate thought was that whatever I did would need to be worked in felt. Felt is such a fantastic and forgiving material, and is much easier to handle for little people. It stays where you put it, is easy to cut, doesn't fray, has great texture, comes in beautiful colours, holds its shape but can be stretched.... Basically it's very versatile and brilliant for kids. 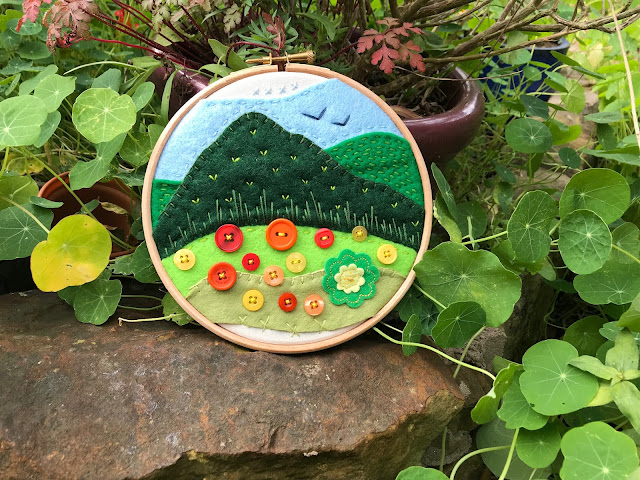 The other thought was that whatever I did needed buttons. Everyone loves buttons, and from personal experience I know that the smalls simple adore brightly coloured buttons.
I haven't met this particular group of Brownies so do not know what their sewing abilities are like, so I have kept my designs simple with only a couple of stitches used. Even so, I wouldn't expect them to be so precise or as detailed as me (that's just my inner control freak peeking out).
As examples for my workshop, I have made two designs, a mountain design using scraps of felt I found in among 'the stash', which has blanket stitch, running stitch and straight stitches holding down the edges, and a seaside design. 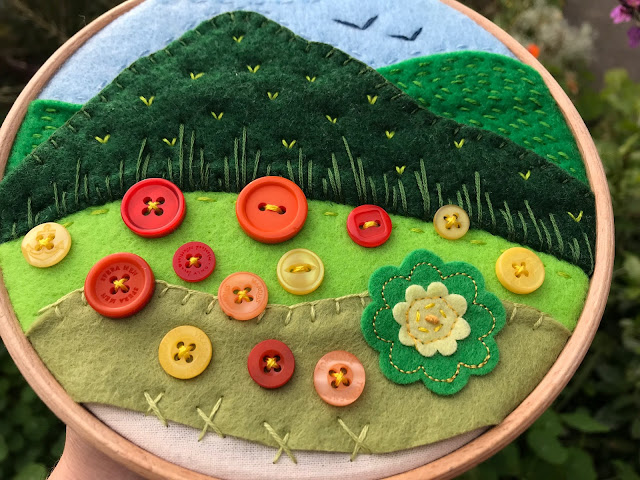 There are elements of my usual stitchscapes within this simplified version, with the cross stitch kisses at the top and big cross stitches holding onto the bottom layer. I have tried not to be too bulky with the felt at the sides to help it sit nicely in the hoop so there is actually quite a lot of cutting away at the shapes and layers to help each layer sit nicely with the ones around it. (Something unlikely to happen with the Brownies.)
I really love the big green mountain in the middle of this piece with the little 'v' stitches dotted along it. There is just something about it that tugs at a little smile within. Of course the button flowers are also super fun, and I found a pre-stitched felt flower in my collection too which has made it's way into the garden at the bottom. 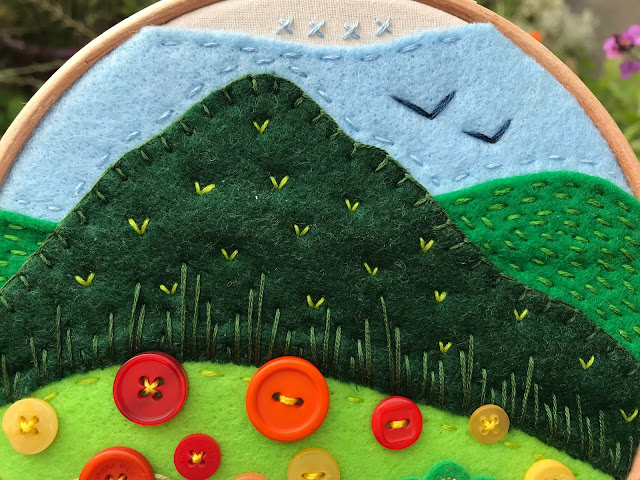 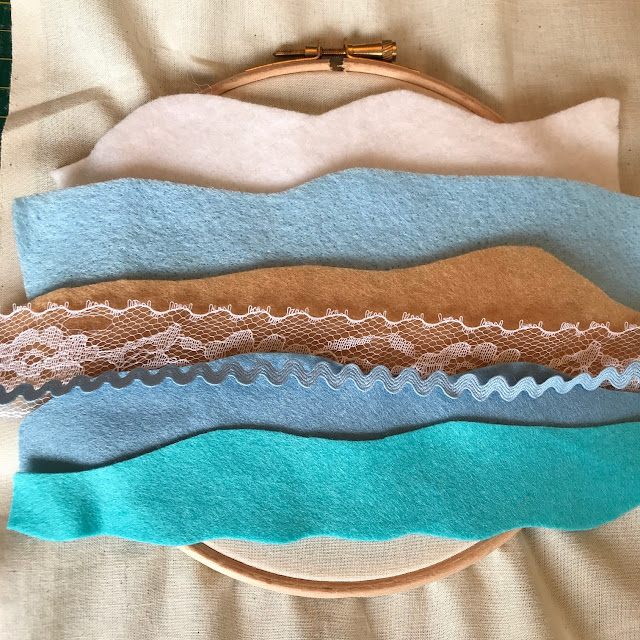 The layers on the seaside version are even simpler with just straight lines and wiggles. I have tried adding in some lace to hint at froth and white horses coming in at the edge of the sea, and will take some lace and ribbons with me for the girls to use. The ripply sand has been made with long, irregular straight stitches which are super easy to do and don't have to be neat at all to look effective. Ric-rac has also been added to the edge of the sea and stitched over with a very simple straight stitch that even the smallest of smalls could master. 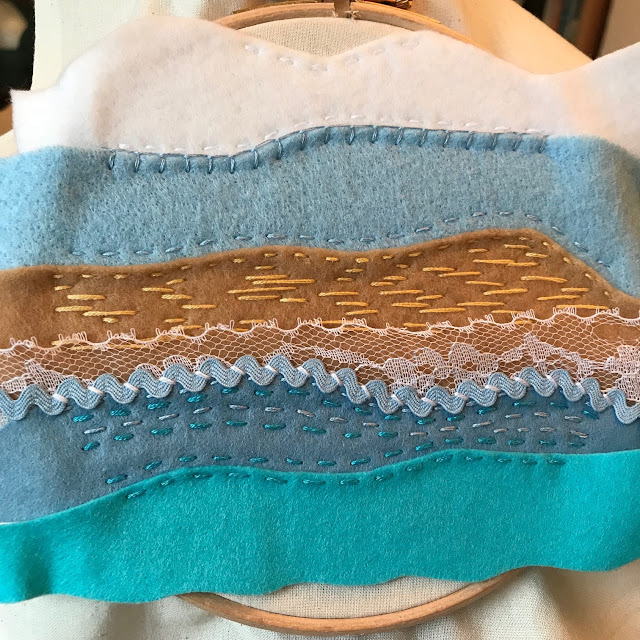 Again the three main stitches are blanket stitch, straight stitch and running stitch. This time my flower garden is at the top of the hoop just beyond the sand, and my flowers have stems on which to sit. 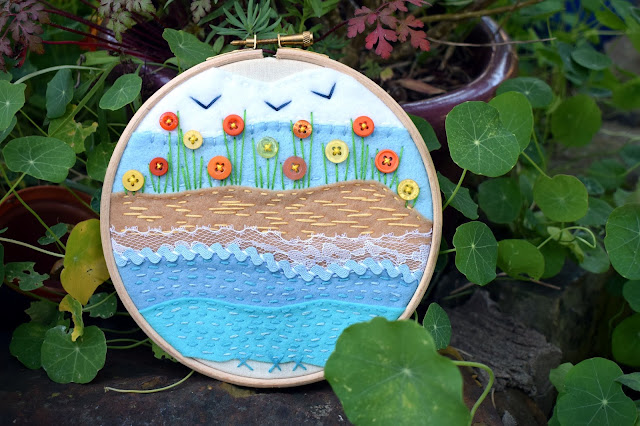 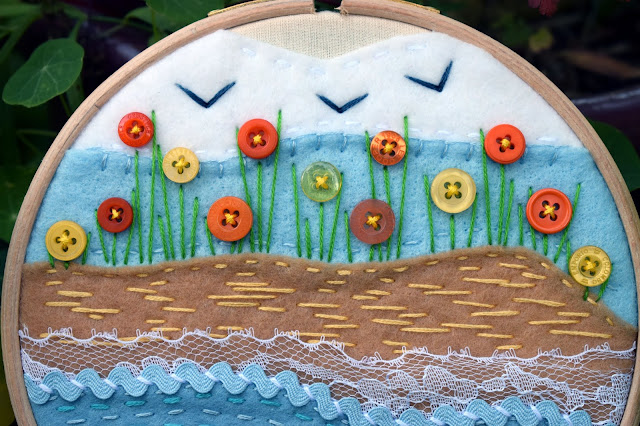 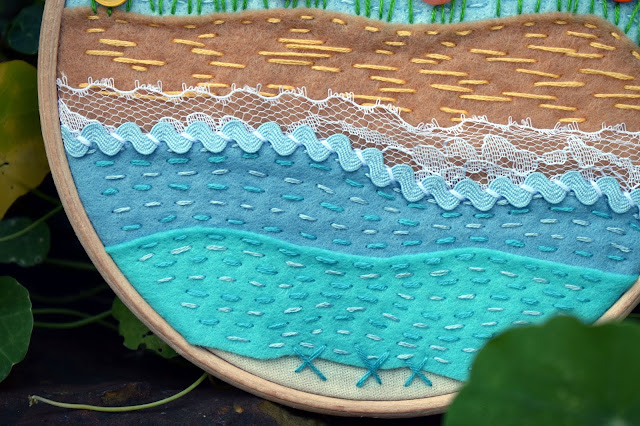 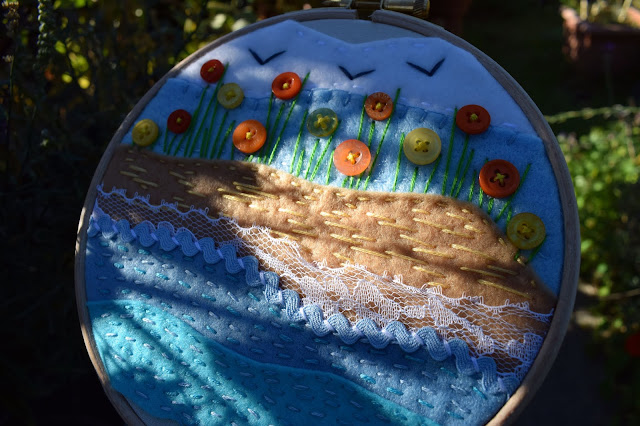 I really hope that the Brownies enjoy their little stitchscape masterclass. I spent most of yesterday cutting up the fabric and pre-stretching the hoops with calico ready to go straight away at the meeting. The girls will entrusted with using real needles so I will have to lay a few ground rules out before we begin, and I've invested in some needle threaders which, once one girl is taught how to use, cuts down my time threading needles considerably! I will try and take lots of photos of their work and let you know how it goes. 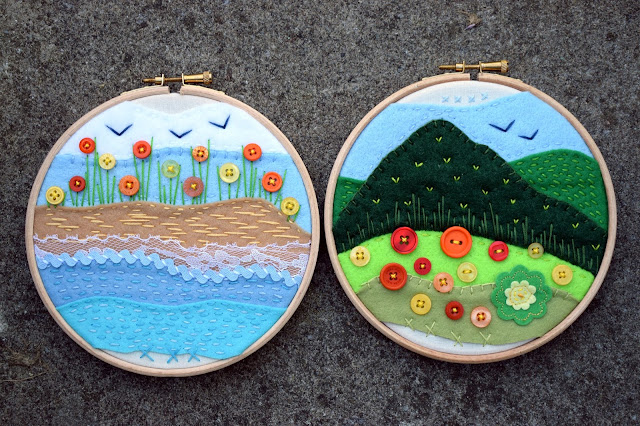