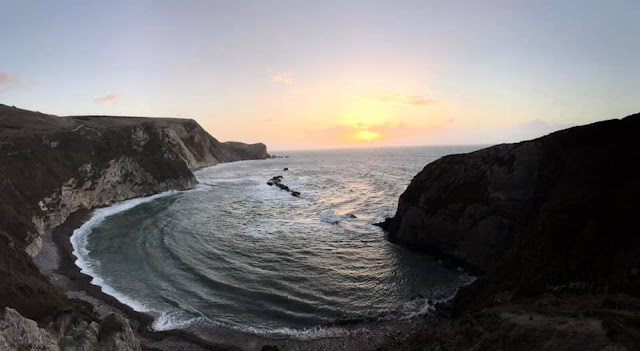 The Sister went off for a weekend away a little while ago, down to Dorset to have a gander at the scenery with her other half who is a photographer and knows about these places. They were up one morning before dawn, waiting for the sun to rise so that they could photograph the beautiful and relatively well known Lulworth Cove. It's a lovely rounded bay with a white pebble beach and clear blue waters - a very popular holiday visiting spot in the summer as it's just one of a string of interesting geological features along this section of the coast, with Durdle Door just a little way away. She sent us the above photo which immediately captured my Stitchscape imagination and I quickly found myself sitting down with a scrap of paper, recapturing it in a simplified pen drawing that could be turned into shapes and fabrics. 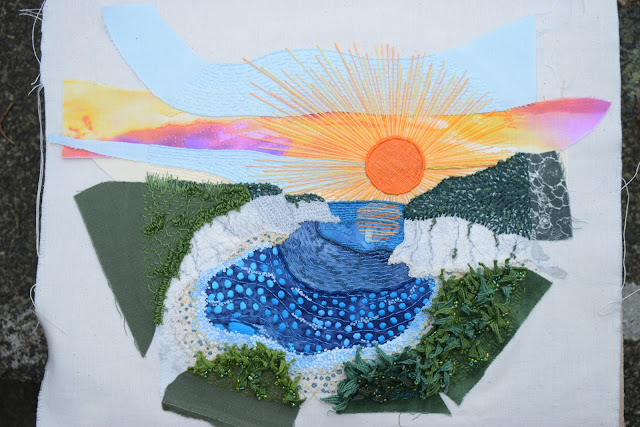 The whole process, from start to finish, can be seen on my Instagram or Facebook pages as I photographed my way through it. I was trying to capture a specific place so this wasn't as relaxed as my usual pieces, I had to draw it out first because each of the cliffs and sections of grass and the sun were cut to specific shapes and then laid down with Bondaweb (double sided fusible webbing) to avoid fraying and to ensure they stayed exactly where I put them. I don't really like using Bondaweb because multiple layers of it are quite tough to stitch through but sometimes it's a real help to keep fabric in line! 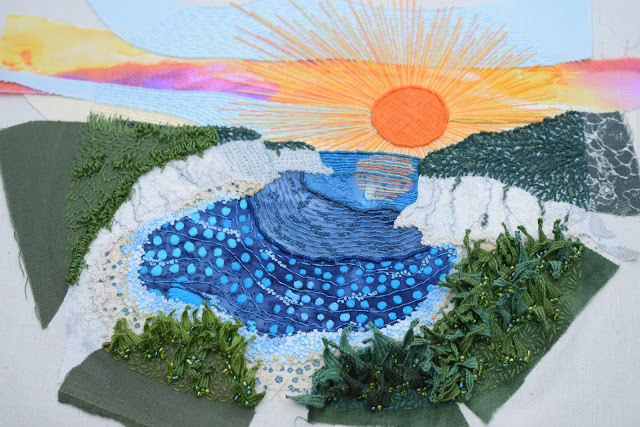 I have used a bit of artistic license here with much brighter fabrics and a much bigger sun but gratifyingly, whilst I was stitching it, several people came up and immediately recognised it as Lulworth Cove without my saying a single word and I'm really pleased with how it has turned out. 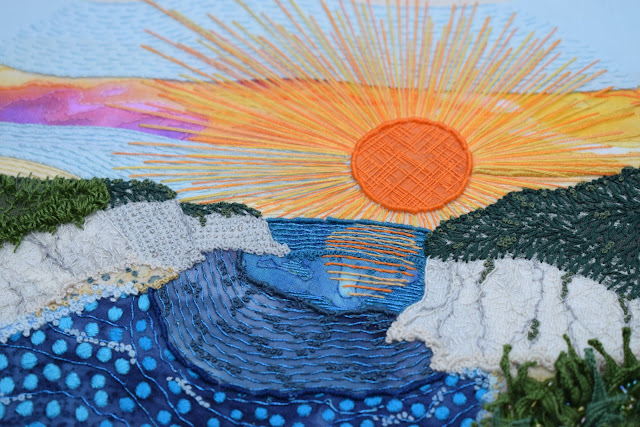 Some stitches used in this piece are new to me which is exciting! These 'grasses' at the bottom of the piece have been made using picot stitch (The Mother reliably informs me that it's a French word therefore the 't' is not pronounced, you should say it as pico) which is a needle woven stitch. This many picot stitches took ages as you have to insert a needle or pin into the fabric, then wrap thread around it to form a triangle, come up through the centre to the point and start weaving downwards until you reach the bottom of the triangle. Once you pull the pin out the stitch bounces upwards and I've then twisted them a little bit so that they look more organic. It was a bit complicated to work around the other stitches once a mass of them were built up and I had to lay a temporary scrap of fabric under the needle whilst weaving so that I didn't catch fibres from the other stitches- it's a fiddle but I think it was worth doing.
I have also added in some iridescent green beads to the undergrowth so that it has a little bit of a sparkle to imitate dew drops and carry through the sparkle from the metallic thread used in the sea section. 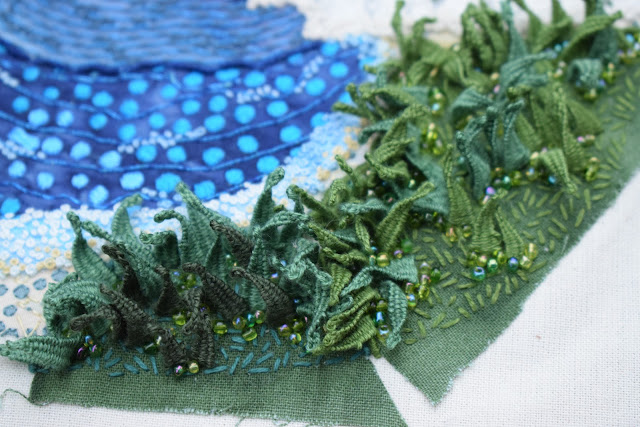 The stitch below is a sort of loop stitch, possibly called moss stitch, something I dimly remembering doing at university but with a special sewing machine, this is a hand version. Essentially you are creating small loops on the surface of the fabric by not pulling the thread all of the way through. Kind of imagine a really messy, loose seed stitch. I found that it was easier to get a regular height by stitching over something and then pulling it out to leave the loops. I used a crochet hook but you could use a pencil or a cocktail stick depending on how high your loops need to be. The edge of the cliff was done using the crochet hook but it then creates really regular rows (something to think about for future stitchscapes- lavender fields maybe?) so I've done a few 'freestyle' loops heading down the cliff faces and between the rows to blend them together more. Combined with running stitch, perpendicular whip stitch and fly stitches, there is a lot going on at the top of this cliff!
The smaller cliffs on this side, as well as the cliff top on the opposite side of the bay have been topped with overlapping fly stitches which add a really interesting texture, especially when little french knots have been added in like little clumps of grass or small bushes. 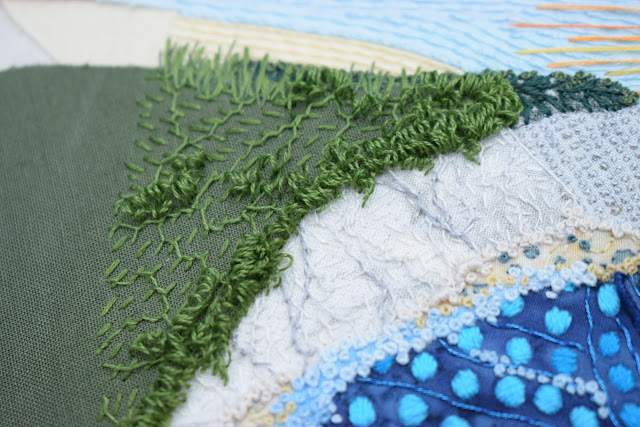 The cliff faces themselves have been worked with seed stitch initially, then whip stitch over the top in different shades of cream or light grey to match the blended colours of the fabric pattern and to create a sense of depth to the rocks where cracks and crevices would naturally be casting shadows- it's a technique I also used in the cliffs in my Seven Sisters Stitchscape. The bottom of the cliffs have been bedded in with 'rockfall' made with bullion knots and french knots. I have tried to keep a sense of perspective with these rocks by making them smaller (less twists or less embroidery strands used at once) the further around the bay they went, the largest ones being closest to the bottom of the piece. 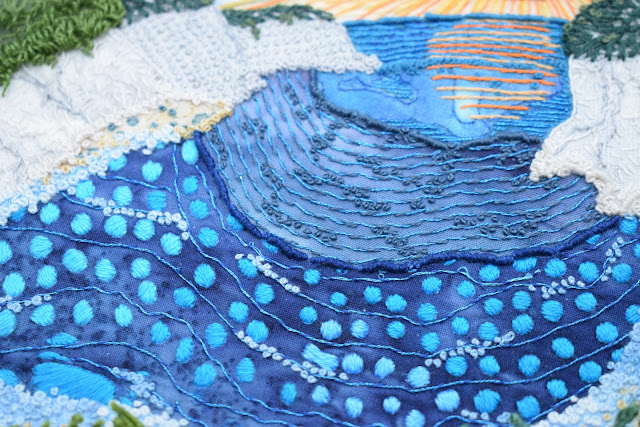 The sea is very sparkly, made with four different patterned fabrics to try and imitate the way patterns in the water will differ depending on the reflection of the clouds and the movement of the water around rocks just below the surface or crashing up against the cliffs. In all of them, however, I have used some kind of whip stitch over running stitch to get that wiggle within the stitch line (you don't get a wiggle in the stitch if you whip over back stitch) and all of these lines are going in the same direction so that the layers flow into each other. French knots have been used to give a sense of bubbles or spray, and the satin stitch in the biggest sea layer really kinds of pushes this idea as the waves then crash onto the french knot filled surf layer by the sandy beach. 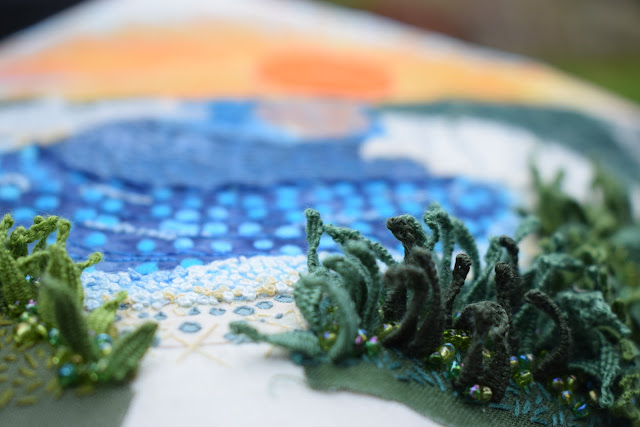 I really like the perspective that is given when you look at this piece from a slight angle, as if peering through the grasses to the bay below. The height and weight of the picot stitches also helps to enhance the feeling that you are standing above the beach looking down. 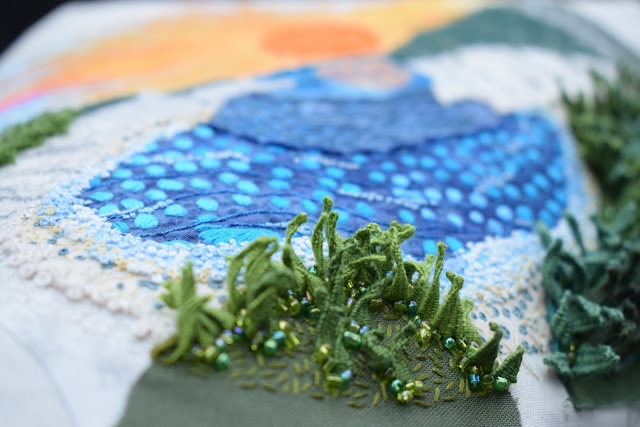 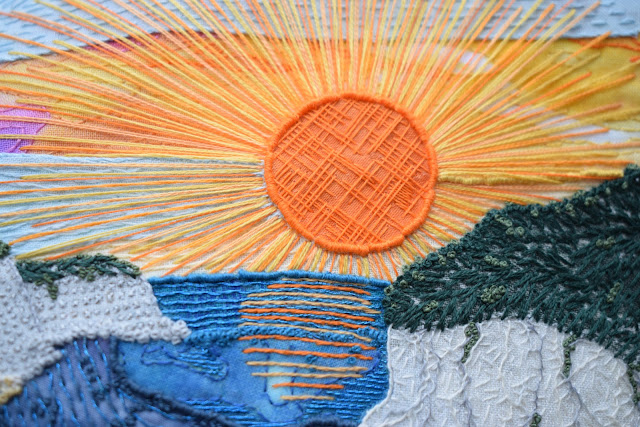 The sun is very simplistic, and one of the best bits about making a sunburst is how quickly it comes together. I have used three or four different colours and you start by quartering the sun and then dividing up the quarters before just adding long stitches at different lengths wherever there is a gap. The middle of the sun is just a big orange ball (my favourite sort of sun), but I really love the reflection in the water below, the colours there are mixed like the rays. You can just about see the stitching I have done on the layers of fabric behind, but I haven't gone overboard with those- the fabrics there are more for adding colour and I have the perfect sunrise batik/spacedyed fabric for this kind of project. 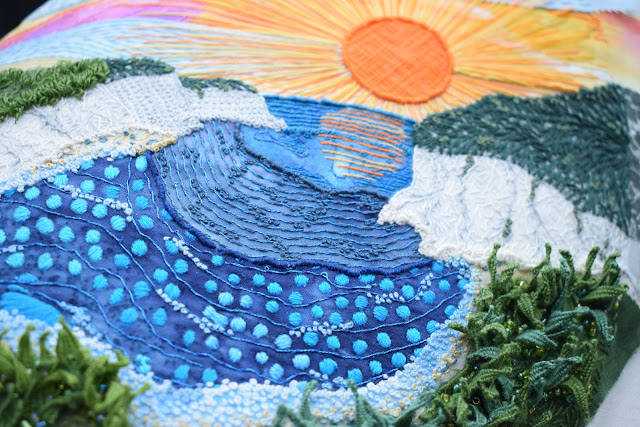 The back of this piece is just as interesting and holds a very similar image, I love looking at this side almost as much as the front! 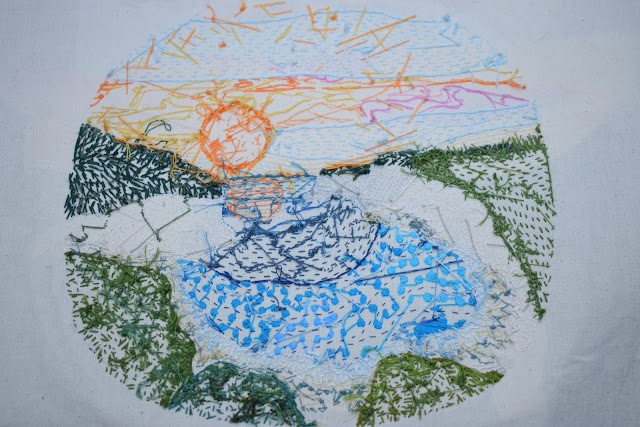 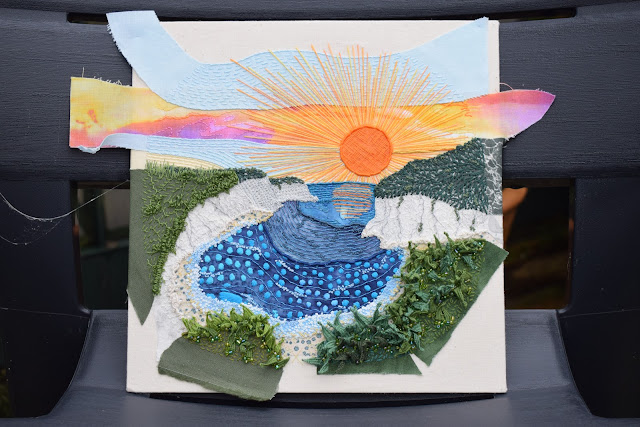