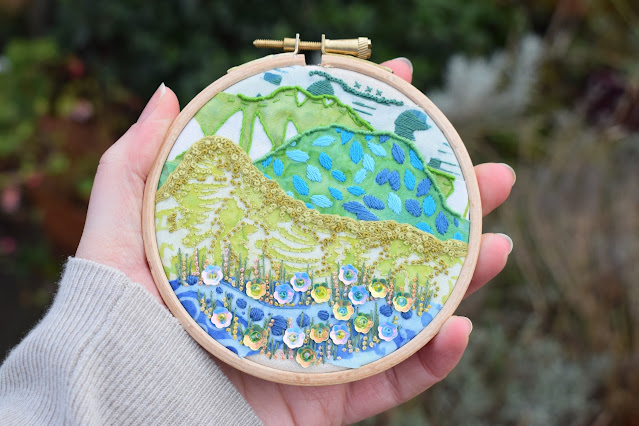 I couldn't come up with a fun name for this little Stitchscape (any ideas?), it was just a fun little piece I started at some point last year intended to be a lunch break filler at work. The work pattern has been all over the place in the last few months/year with so much catching up to do from the first lockdown that I didn't get much of a lunch break as I mostly worked through them and then we had lockdown 2.0, at which point I started working from home, where lunch breaks also don't really happen as much, and then it was Christmas... routines are all out of the window at this point and we take each day as it comes. The only full and proper plans we make are on Zoom (online) as now we are in lockdown 3.0 any outdoor plans are all cancelled anyway! 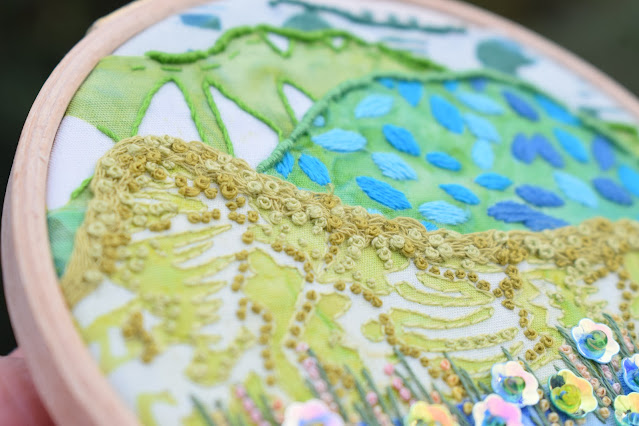 But, I am still feeling very inspired following on from my Candy Mountain Stitchscape and this poor unfinished hoop (one of many started last year and still waiting to be finished off!) caught my eye. I had only stitched a couple of leaf shapes and nothing else so it was essentially a new hoop. The fabrics are all scraps leftover from putting together my Bluebell Garden Stitchscape kits so they aren't new and, to be honest, I haven't changed the treatment of them much either but it's amazing how they all still look so different. 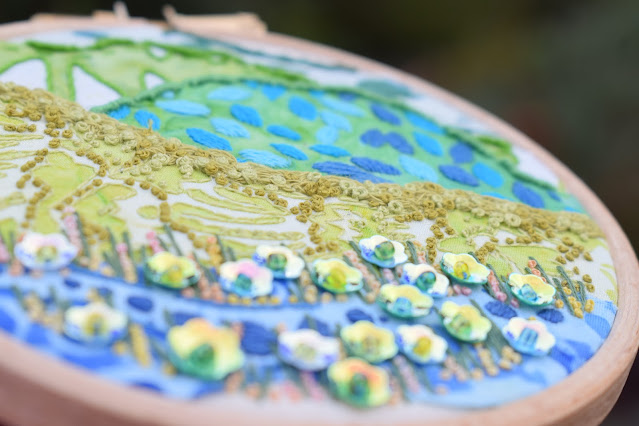 Because it had been so long I'd put away the thread colour I was using for the blue leaf batik but I think this actually worked in my favour. I used up the thread on the needle, leaving some gaps to stitch in more colours so it kind of washes light around the hill shape, with the dark concentrated on one side. It's not a fancy satin stitch and each leaf shape was started with a centre line then more stitches worked either side (a great way to keep your stitches in an even direction - it works on circles too). 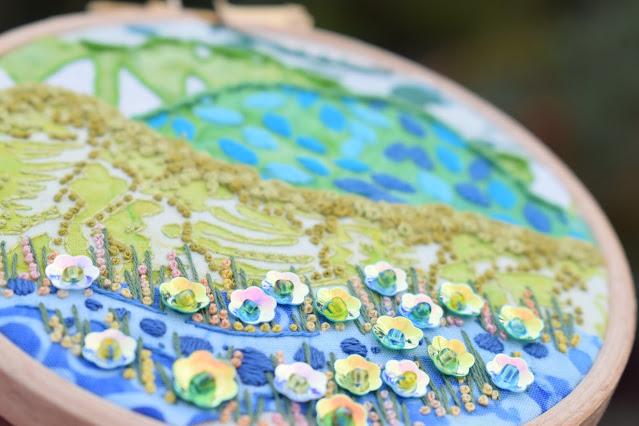 The top two layers were also treated very simply (you don't want to go too mad in a tiny hoop) with the top piece using a matching single strand of thread to work straight stitches across each block shape (they aren't close enough for satin stitch) and one long stitch over each line. The same thread was used for two strand, three twist french knots covering that top edge, and some little kisses into the calico above.
The layer underneath has had the block shapes edged with a whipped back stitch (working a row of back stitch first then going over with whip stitch) and then a single strand running stitch just along the top of the fabric to help pin that down ready for bullion knots on the edge. I could have added additional textures to this piece; continued the running stitch down to cover all of the green sections or seed stitch...but I think the simple treatment has worked well here as it contrasts with the mass of pattern going on below. 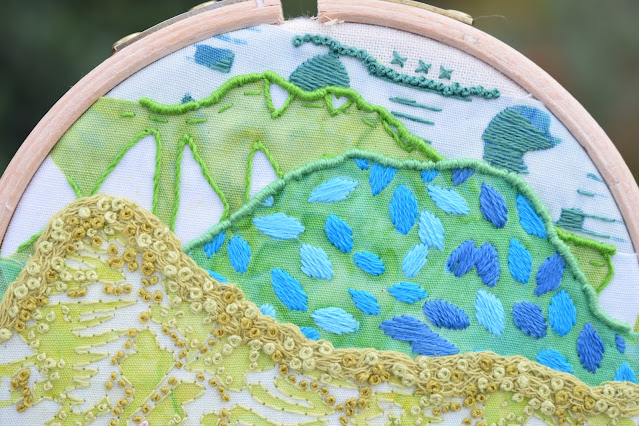 The zesty green layer also initially just had back stitch in a single strand around the block shapes and I was going to leave it there but then I found a tiny bit of trimming in my drawer which I wanted to use. Once it was stitched on though it stood out like a sore thumb and I toyed with the idea of taking it off again but decided to try blending it in, adding zesty green french knots along the length of the trimming and down into the fabric layer getting smaller as it went down - to look like rows of hedges or trodden pathways. It still stood out a bit so I then added in some more french knots in the same colour I'd worked the back stitches in to bleed that colour up into the trimming and I actually really like how it's turned out! 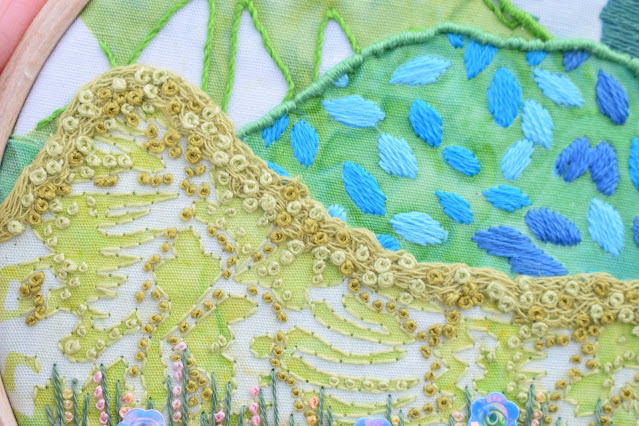 The bottom batik layer which, when originally used, was inspiring thoughts of Bluebells now reminded me of water where the lines of the pattern had chanced to be. The big blue circles I worked a rough satin stitch, alternating the direction of the stitches in each circle (something you may not have considered - they look different if you do them all the same direction or switch them up as the light bounces off the thread differently), and then a stem stitch along the visible straight lines of the 'wave'.
I was still thinking about those sequins The Mother bought me for Christmas that I used on the Candy Mountain Stitchscape and the different colours it had. As well as the blue undertone one I used before, there was a green/gold undertone one which would be absolutely perfect!! So both of them were scattered around the edge of my main river section and stitched down using different tinted clear beads at the centre. 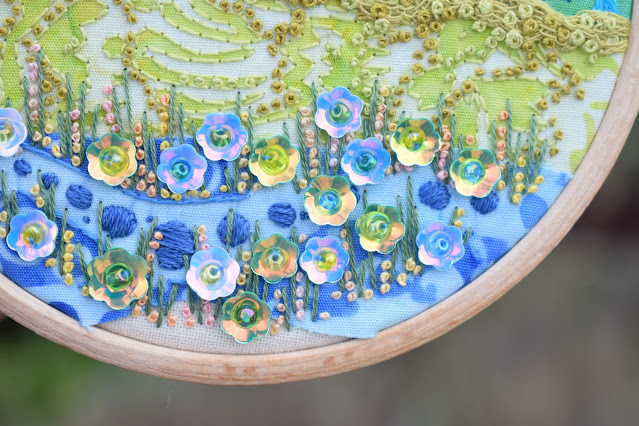 The sequins didn't quite gel in their surroundings on their own but I didn't want anything big and flashy, or very tall, so ended up adding little straight stitch stems around them to try and blend them into their surrounds (oily iridescent sequins don't necessarily fit into a typical landscape!).
It worked but it was still missing something so I started adding little two strand, one twist french knots around them and the knots started creeping up some of the stems like bindweed which looked really lovely! The thread itself is one of the variegated DMC threads I used in the last Stitchscape so where I have worked along the two rows of sequin flowers, the colours also gradient across which is really pretty.
The knots have helped to make a distinction of almost two banks along the water's edge, with blue bubbles of the rushing stream flowing between the two. There is quite a lot of knotwork between the blending of the little flowers and the green hill knots but that's the thing about not planning before you start. If I'd planned it this would have turned out completely differently! 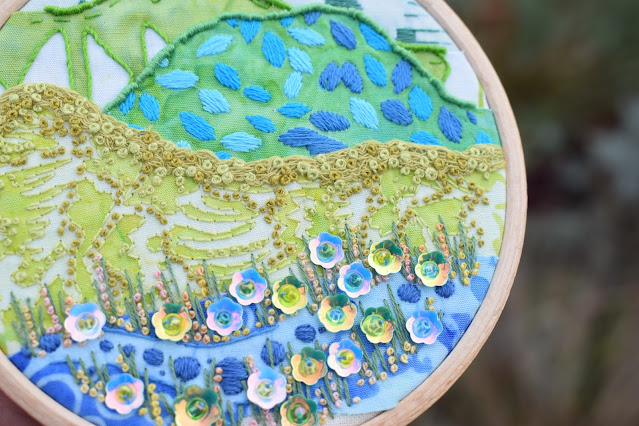 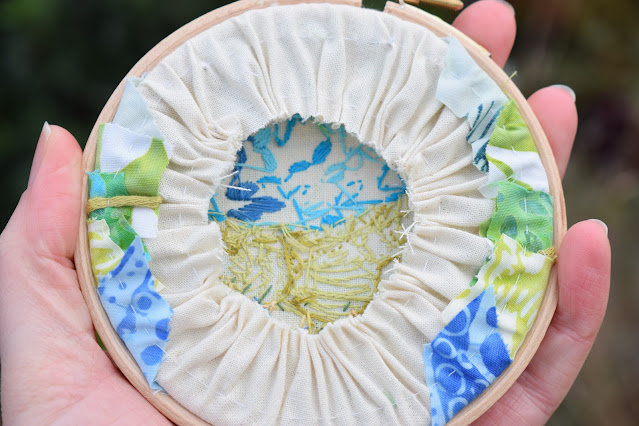 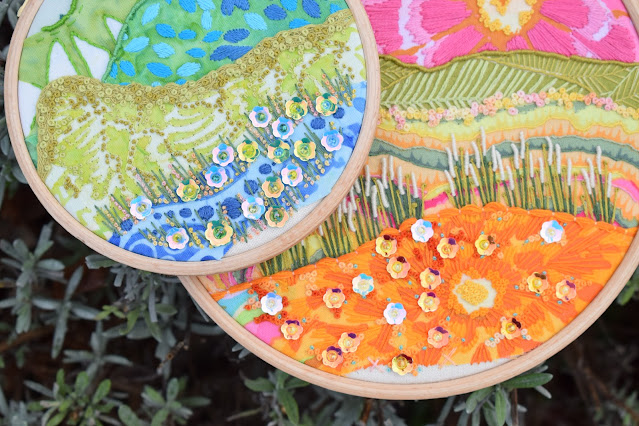 I love that these two Stitchscapes clash and meld so well together. They are completely different but look almost part of the same collection thanks to the sequins. The colours are the perfect compliment (quite literally) to each other! 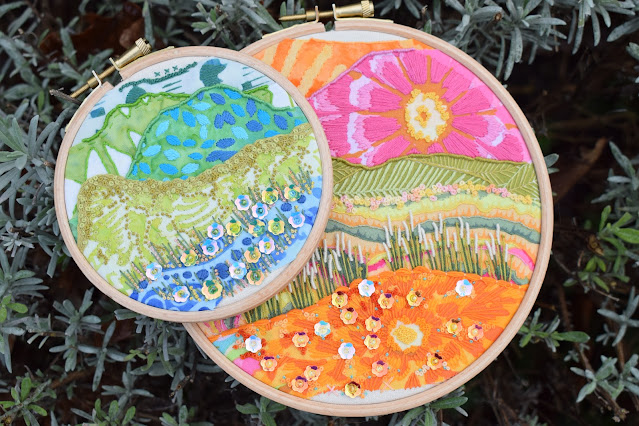 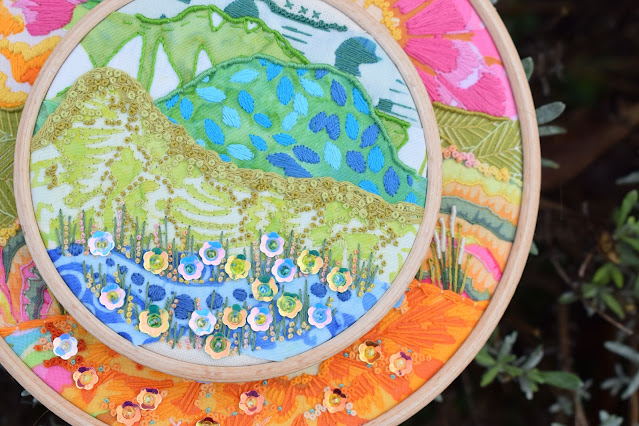 So, my little 10cm blue hoop stitch run down is; french knots, straight stitch, bullion knots, running stitch, whip stitch, satin stitch, back stitch, couching, stem stitch. Really simple but so effective!
Do you prefer one hoop over the other? 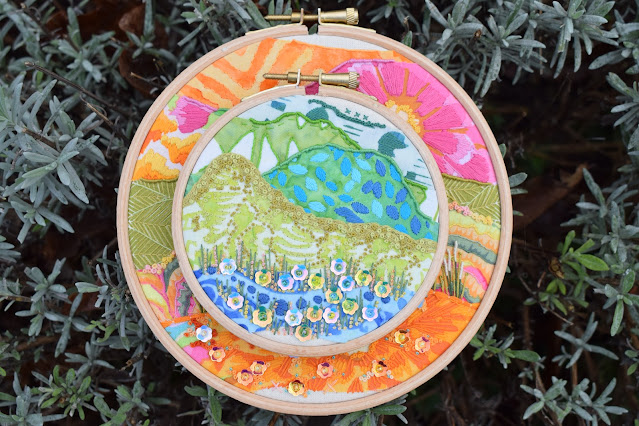