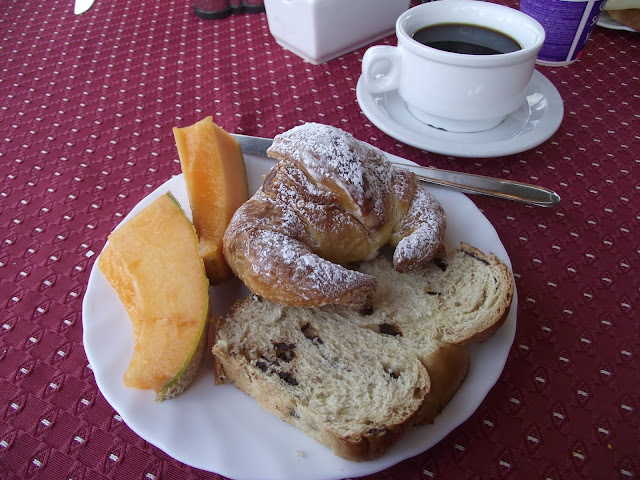 Our last day!! Very sad, we didn't have nearly enough time in lovely Roma. As we had done all of the big things we wanted to see, we had a leisurely morning at the hotel, and were treated to a fly past of the Frecce Tricolori (Tricolour Arrows)- who are the Italian version of the English Red Arrows, an aerobatic demonstration team. They flew past so quickly I didn't have time to reach for my camera!! They were celebrating Republic Day which is a bank holiday for many Italians and a day for official ceremonies and military parades.

It was a bit rainy but we donned our waterproof macs and set off for the Trinitá dei Monti, the church at the top of the Spanish Steps. As we had walked past it and stared up at it from the bottom of the steps we thought it high time we actually went in it! 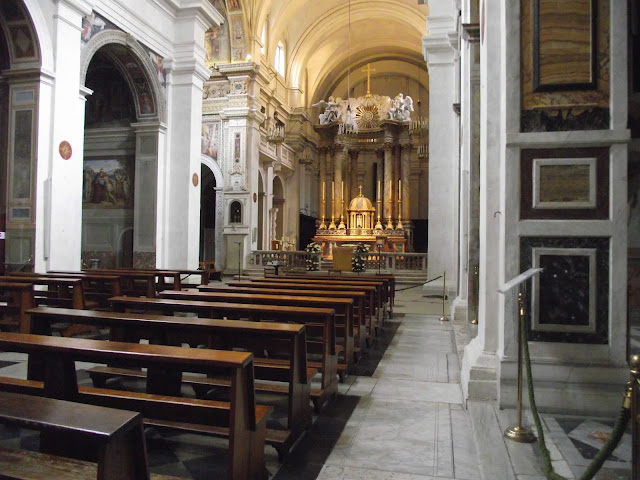 It was a very pretty little church, with lots of large paintings adorning the walls of the various little chapels off to the side of the central part. The church itself soon filled up with people escaping from the weather outside which had turned a bit nasty. 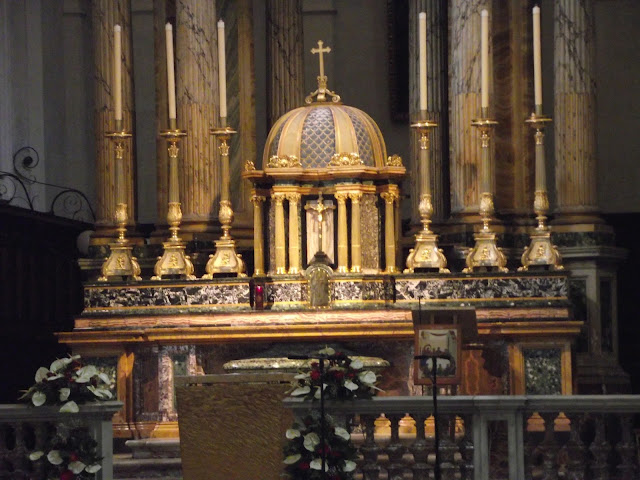 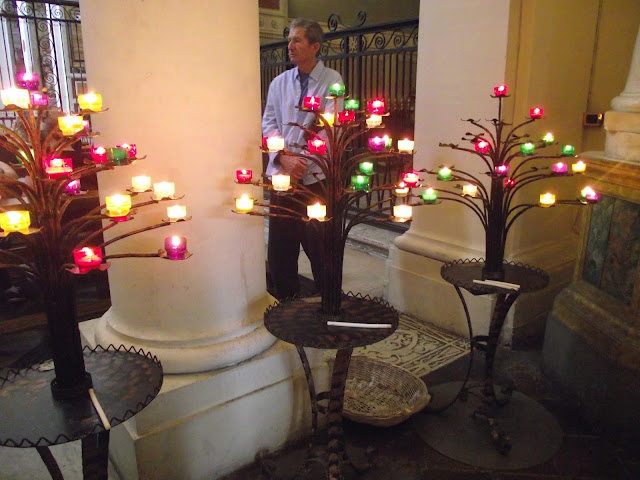 I loved these candle trees with their bright colours. 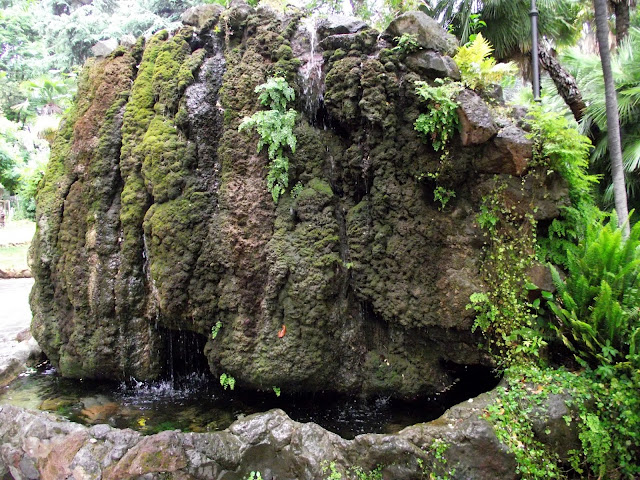 Once the rain had died down to more of a drizzle we set off again for another church, which at the time we had mistakenly thought was one we could see from the rooftop terrace- mainly because it has a very similar nickname to San Carlo, the church we'd visited on the first day. We walked quite a long way and then found ourselves in a little park at the back of the church with a lovely rocky waterfall that made a lovely trickling noise. 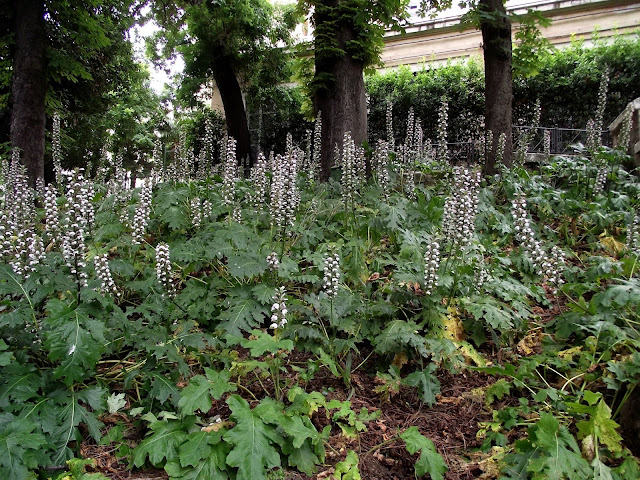 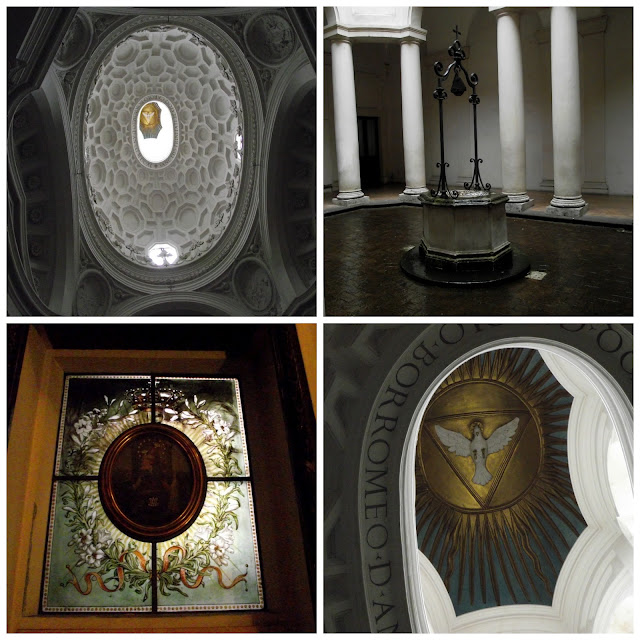 The church we went to was actually called San Carlo alle Quattro Fontane (who would have thought there was more than one San Carlo? Apparently there are at least three of them!), also called San Carlino. It was a strange building, the entrance to it being directly on the road of a busy crossroads with barely a pavement in front of it. Once inside, the church part was tiny in comparison to others we had seen, but it is part of a monastic complex and there were lots of other rooms to explore. Behind the altar at the back of the church there is a little cloister, slightly damp, and we were also allowed down a steep spiral staircase to the crypt. 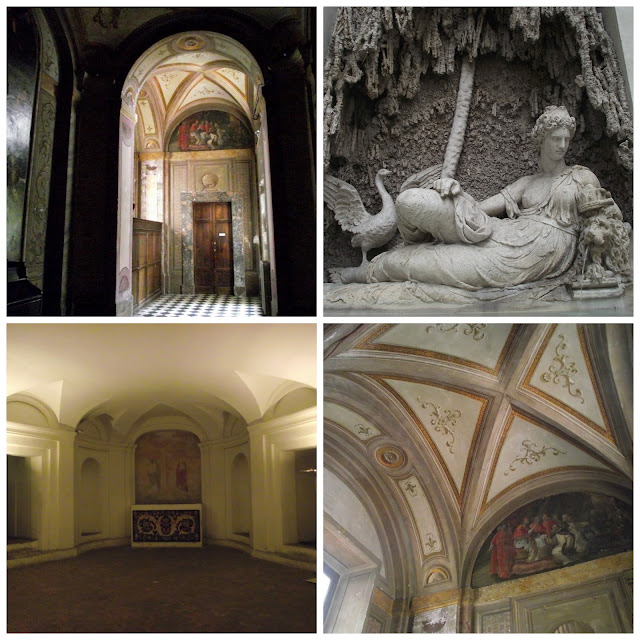 The architect, Francesco Borromini, had intended for himself to be buried in this crypt and so built in a little room for this purpose. However, he was plagued with mental illness for most of his life and eventually ended up committing suicide, a terrible sin, and the monks at the time refused to let him be buried here. It is a very unusually designed, geometric church though, a great credit to his mathematical mind- especially the design of the dome at the top. 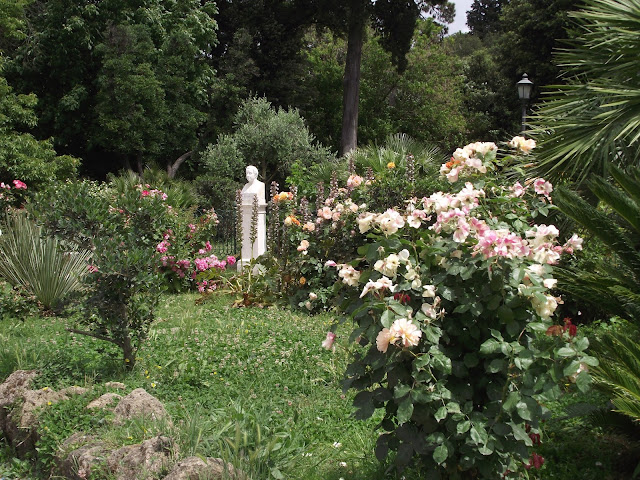 With only a couple more hours left before we had to begin our train journey to the airport, we decided to have one last meander through the Villa Borghese Gardens. The sun was starting to come out too and we sat on one of the benches overlooking the rooftops of Rome and had a final gelato- lemon, in my case. 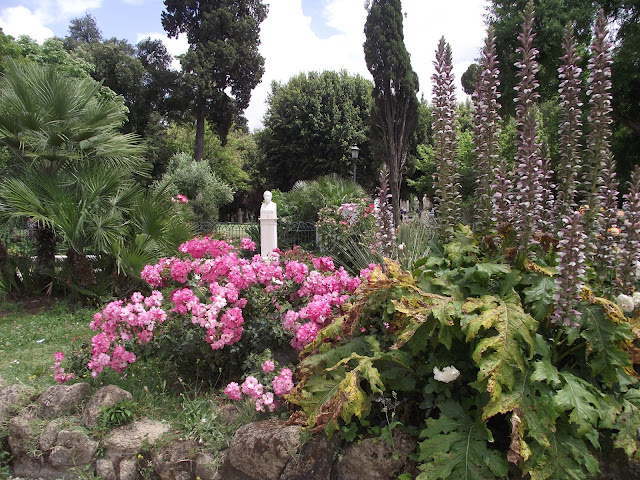 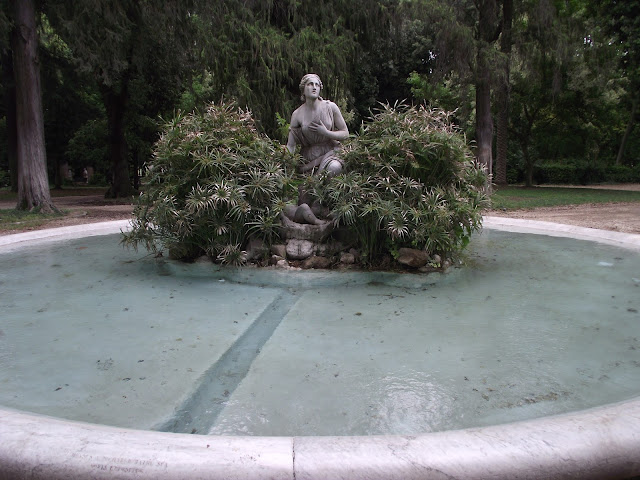 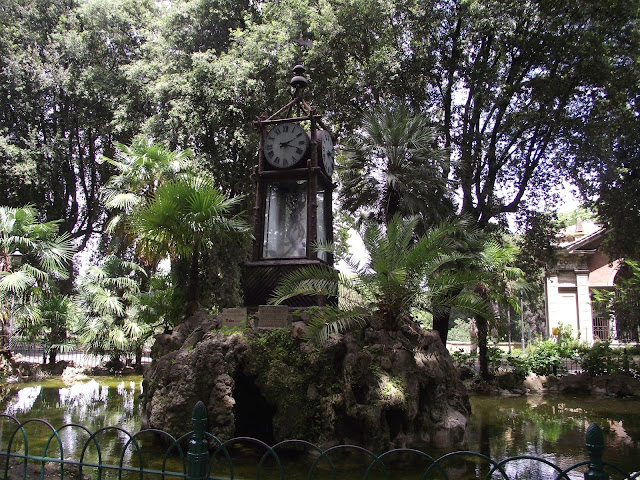 There is a really clever water clock in the gardens which relies on the movement of the water to keep it going. It's really fascinating to watch the internal cups scooping up and tipping out the water. It seemed to keep pretty good time too! 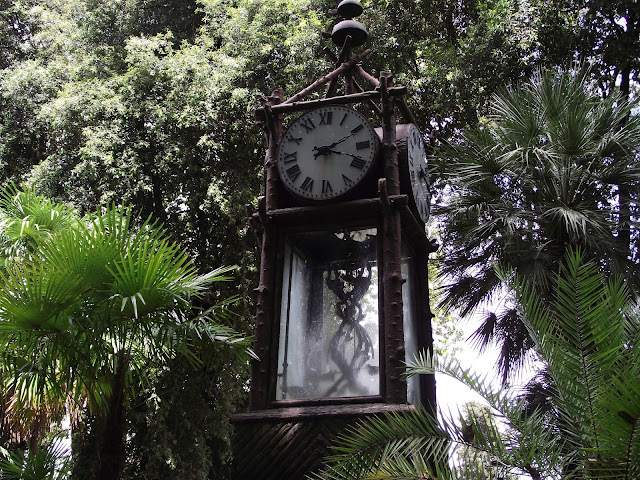 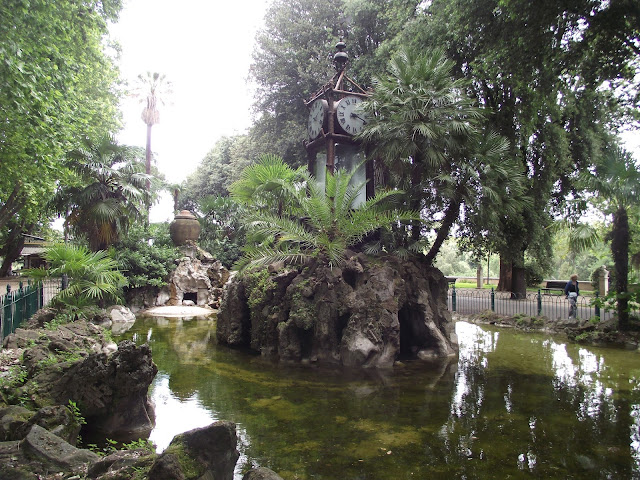 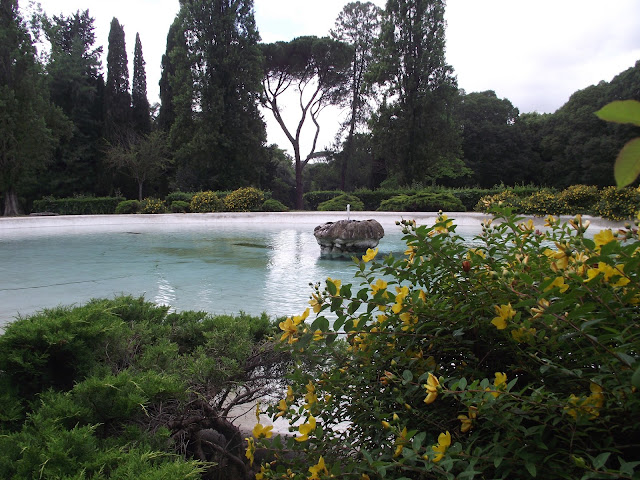 We found a couple more fountains that we hadn't noticed before and became aware of a squawking from above us, which turned out to be Parakeets! 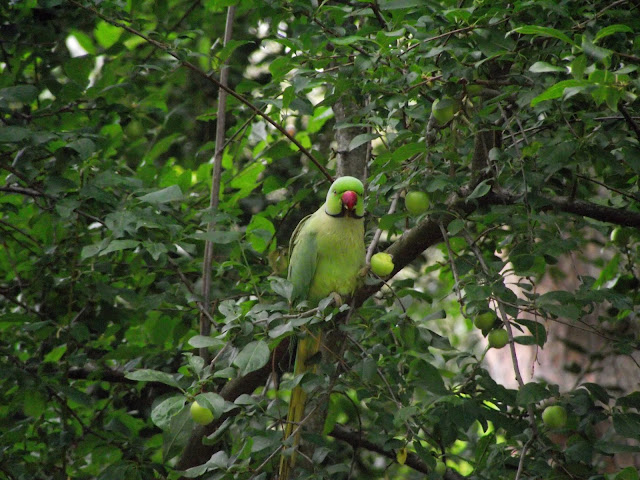 This kept us amused for ages, running about between the trees trying to catch a glimpse of these very cleverly disguised birds. Eventually we found a tree that they were very interested in as it had a type of fruit on it which looked like a cross between an apple and a grape. Clearly these were delicious and they would pluck the fruit from the tree with their beaks (often hanging upside down to do so), then would daintily hold it in one claw and nibble on it until they grew bored with that particular one, threw it away and started again. 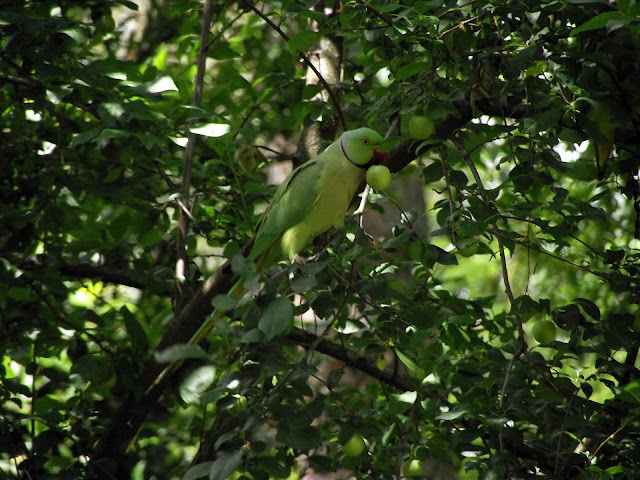 They were so funny to watch and a brilliant way to end our 'proper' time in Rome.
Eventually we left the Parakeets to their dinner and made our way back to the hotel to collect our luggage, hopped on the metro and the train to the airport and made our way back to not-so-sunny England, our heads full of memories of sunshine and Gladiators!! Such a fantastic holiday! 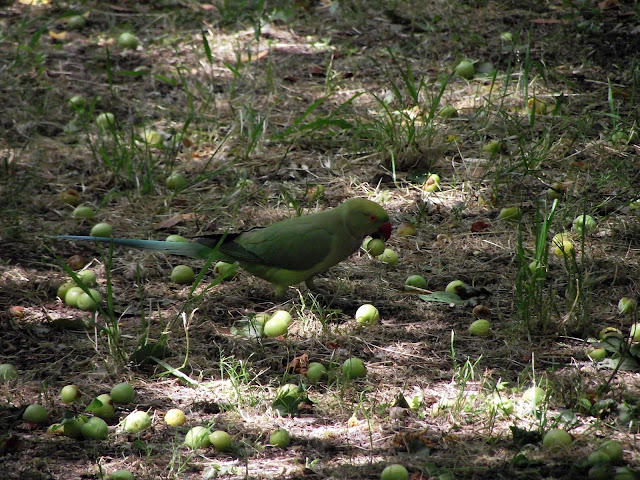