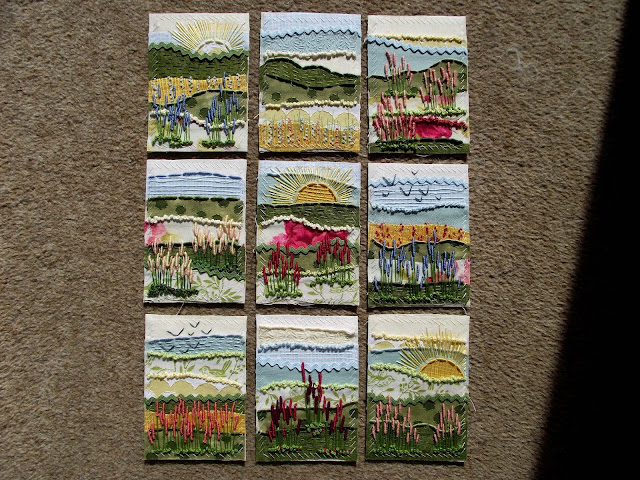 Aren't these the cutest things?! Mini baby Stitchscapes! I was thinking a couple of weeks ago about how much I've missed making ATCs (Artist Trading Cards) since my group closed down due to lack of interest, and pondering about making smaller versions of my Stitchscapes in an attempt to diversify my product range- so I hit upon the idea of combining the two! 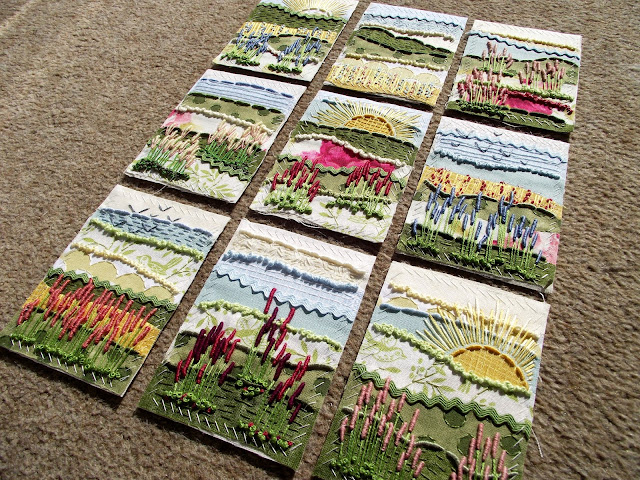 The cards are the same size as the ATCs- 2.5 inches by 3.5 inches- which is about the size of modern day trading cards, and I have backed them with thin card like I used to do to make them more sturdy, but you could do what you liked with them; pop them into a little box frame, glue them to the front of  greetings cards for a special message, or just keep them in their little acetate envelopes. 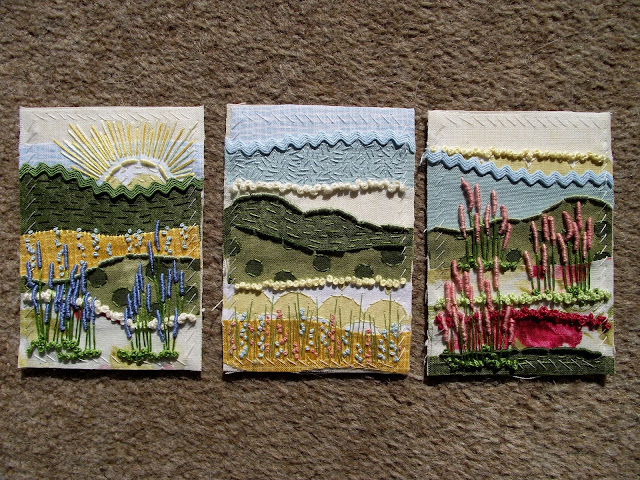 The idea behind these was to speed things up, but in reality I think I made them too complicated and I ended up spending the same, if not more, amount of time as I would on a full sized Stitchscape. I did approach them slightly differently as I chose a selection of fabrics and ironed entire strips of them with Bondaweb, which is a double sided interfacing. You cut a strip of Bondaweb and iron it with paper side up onto the back of your fabric, then cut your shape, peel off the paper, leaving the sticky glue behind, and iron the shape down to heat and set the glue. Much quicker than tacking the fabrics down with thread! 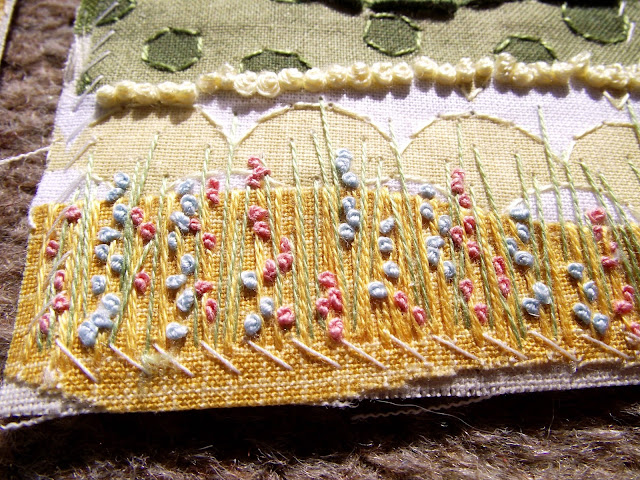 I wanted them to seem the same as a proper Stitchscape though so my approach to stitching was pretty much the same, working up the layers and adding stitches based on the fabric print, then embellishing with bullion knot flowers. I particularly like the little wheatfield inspired cards where I have put in little tiny french knots in pastel colours, they are so delicate! 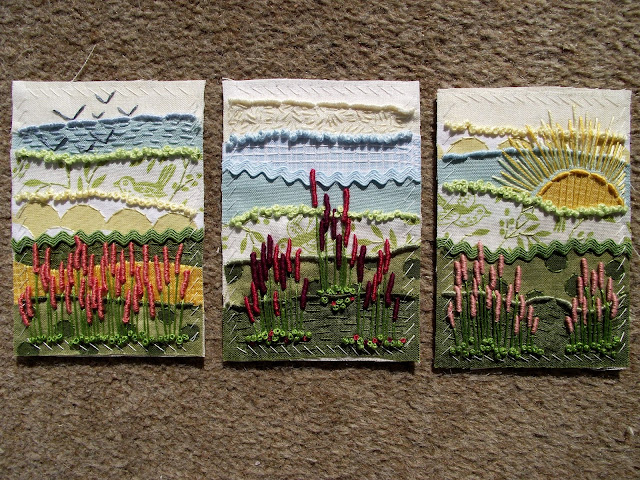 A couple of my pieces had blazing sunshine in them which I really enjoyed embroidering in. My current Flowing River Stitchscape has yet to have its sunshine put in so I was thinking of my technique here. That's the other great thing about mini Stitchscapes, I can use them as testers to try out little ideas on a small scale before making them big! 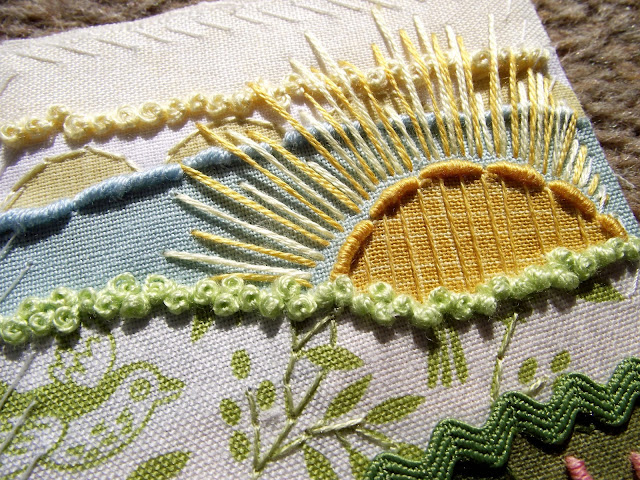 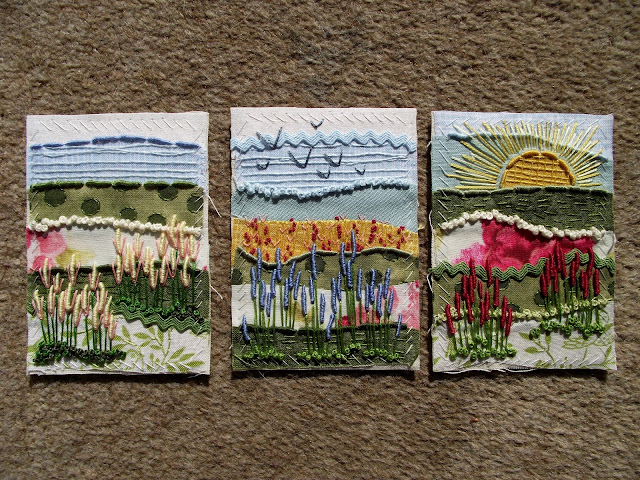 Each of these minis has a strip of mini ric-rac to add to the texture, either a blue in the sky or a green in the fields. I like the idea that even the trimmings used have been scaled down to size!
There is my usual range of stitches in these pieces; kantha stitch (layers of running stitch), french knots, bullion knots, straight stitch, whip stitch, back stitch, fly stitch, seed stitch- my go to guys for all Stitchscapes. It's the combination of these that makes things interesting, and also the sizes- whether they have been scaled up or down; like in the below image with large fly stitches to represent birds and tiny fly stitches hinting at the heads of wheat, or the tiny one twist french knots for the distant poppies and the larger five twist french knots for the heavy skyline. 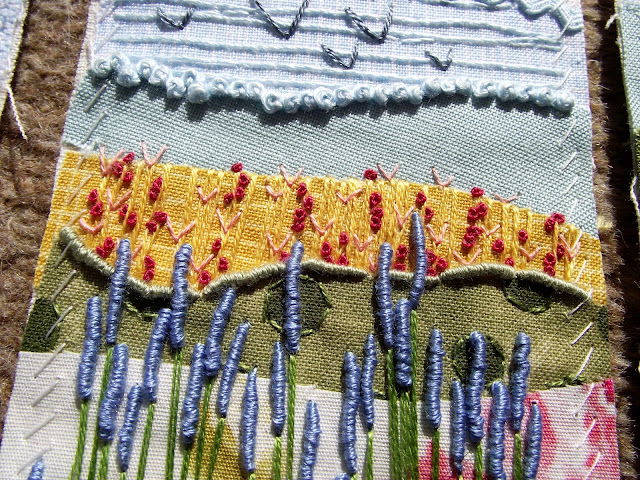 I shall have to try and limit myself a little bit more for the next lot! I wonder what theme I could give them? Any thoughts? 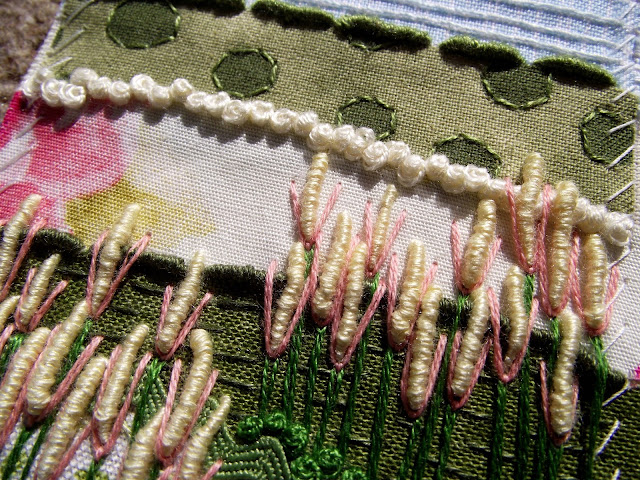