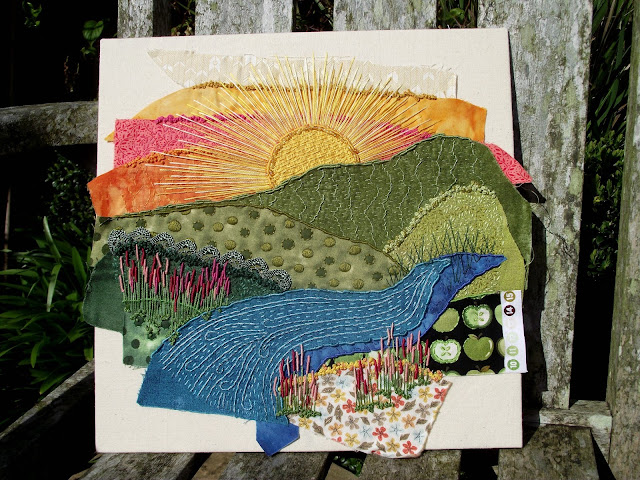 Afternoon all! I would like to introduce you to the finished Flowing River Stitchscape!! This one has definitely taken a while to complete, mainly because I kept getting distracted with other projects (like my stitchscape minis). I had a bit of a wobbly halfway through this one, suddenly deciding I didn't like it and seriously considering abandoning the entire project and starting with something new. I mentioned in my last post about my doubt over the colours and shapes and composition, but I plodded onwards, layer by layer and I am much happier with the end result. 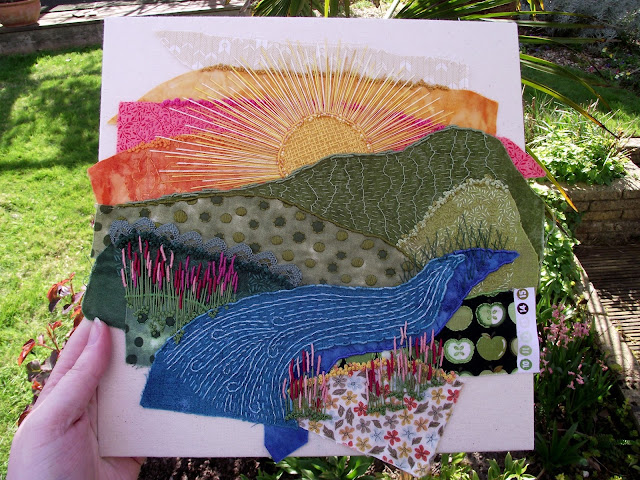 Funnily enough, one of the things that made this piece for me is the uppermost green layer. I revisited this section as the initial running stitches were really bothering me. I had just worked layers and layers of simple running stitches across it but it looked too much like the river and as it is such a large piece of fabric in relation to the others, it became overkill on the horizontal lines. I wanted to try and break this up so began threading the needle up and down, winding it over and under the little stitches, bringing it down in a rather jagged line to the bottom before climbing back up further along. I really like this! It reminds me of animal trails or footpaths trodden into grass and works so well in terms of composition as it mirrors the direction of the bullion knot flowers at the bottom- phew, stitchscape saved! 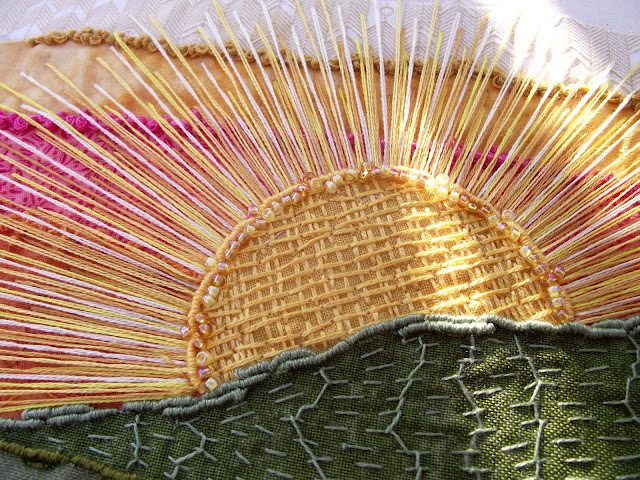 The sun was great fun to create. I followed the cross hatched lines of the yellow fabric using back stitch in the centre, with bullion knots around the outside embellished with tiny yellow beads to add that extra sparkle. The sun rays are made up of four colours of DMC thread and just explode out from the middle! There are so many streaks it's almost like a long stitch satin stitch- if you are going to make a sunset I think you really ought to go for it! No namby pamby, every-now-and-then stitches! 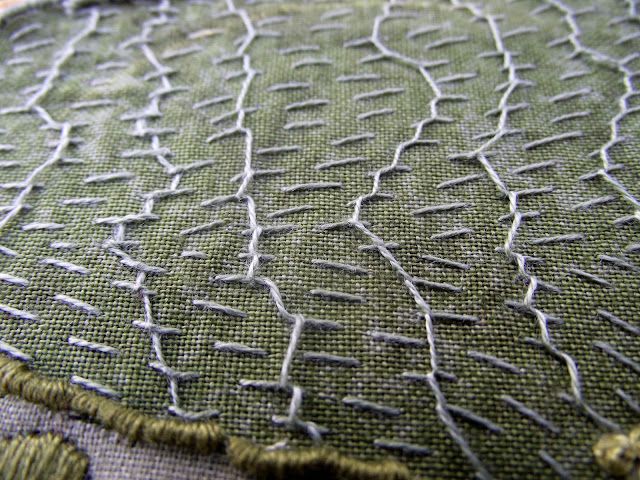 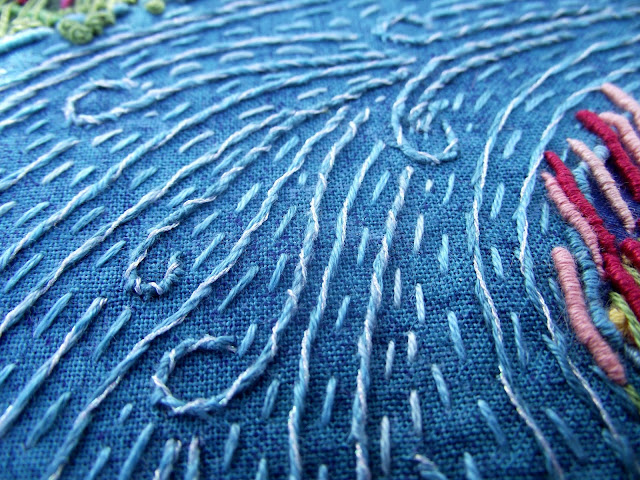 As a last minute afterthought, I added a single strand of metallic blue to the whip stitches in my river. I did think about little blue beads but didn't want to detract from the sun too much. The whip stitches add just the right amount of glitter to hint at the sparkles you see when sunbeams kiss the water. 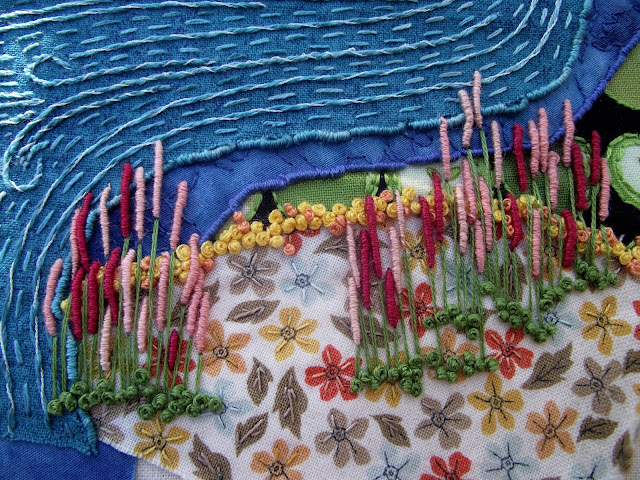 Throughout the entire stitchscape, I was trying to think of how to create the appearance of the last rays of sun touching parts of the hills and the water and the flowers. I've spoken about the duo coloured seed stitches creating patches of light, and with the glitter in the river and the beads in the sun, I think I have achieved this somewhat. 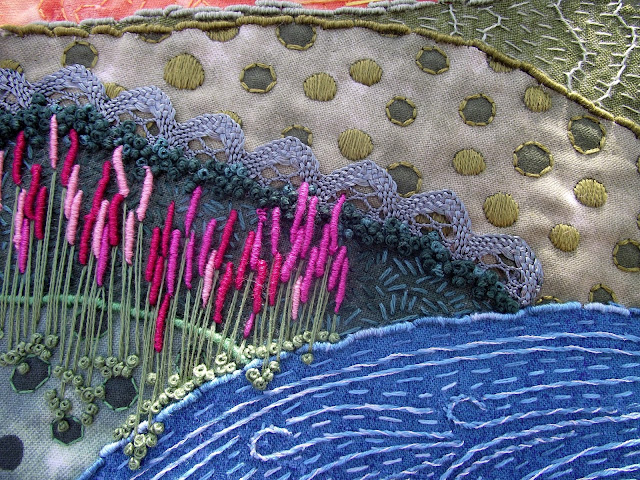 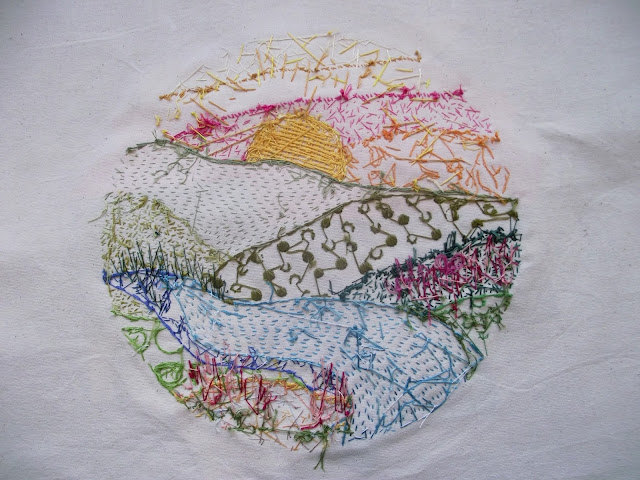 Before I mounted it, I thought you might like to see the back of the piece so snapped a quick photo. I love having a peek at the behind-the-scenes side; sometimes it can spark ideas for further 'scapes, or ways of stitching. It's very free spirited and shows you the different colours of thread I use in my stitchscapes. I try to put in as many as I can as it gives a more natural appearance- the less colours you use, the more stylised it can appear. 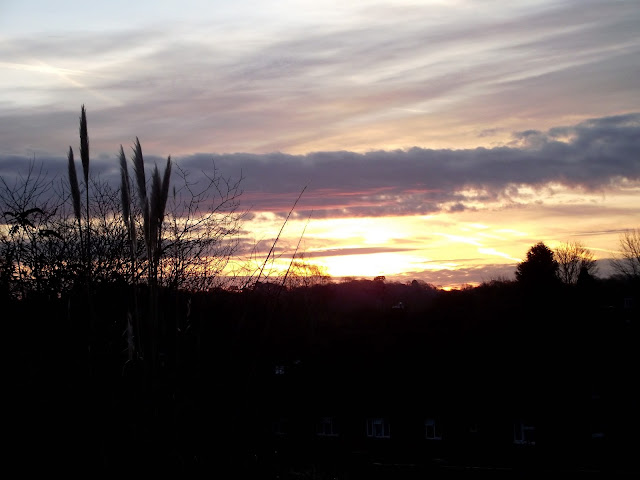 There has been lots of inspiration in the mornings for this piece as I am perfectly timed to watch the sun come up in a blaze of orange, and see the clouds change from pink to purple to yellow to white. This should keep me going through my next set of stitchscape minis which are all about sunrise/sunset. Time to pick up that hoop! 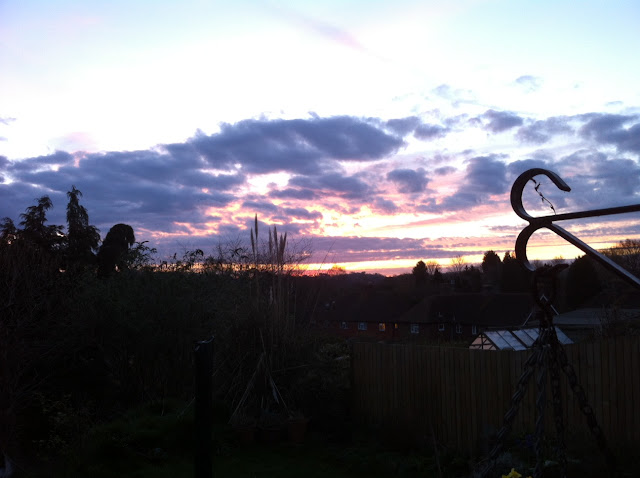