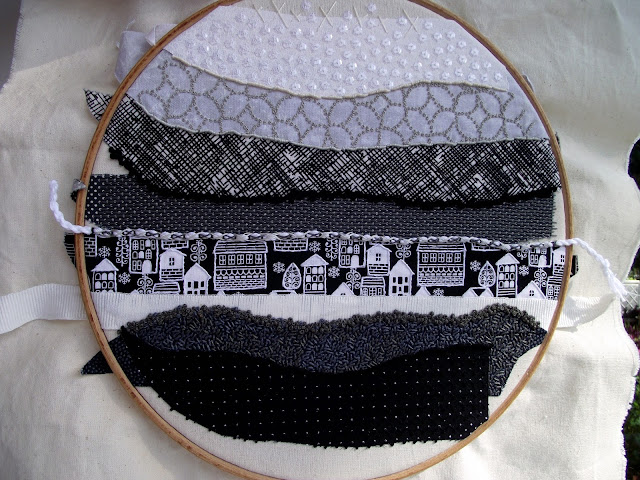 My black and white stitchscape is finished!! It has been growing and growing this week, until finally, last night, it was deemed complete. The problem with these 'scapes is that you can keep going and adding more and more, layer after layer, but too much and you will spoil the effect. It is tricky to know sometimes when one is finished- some feel right when the last stitch has gone in, and others, like this one, have to be questioned and queried; should more be added, is there enough? 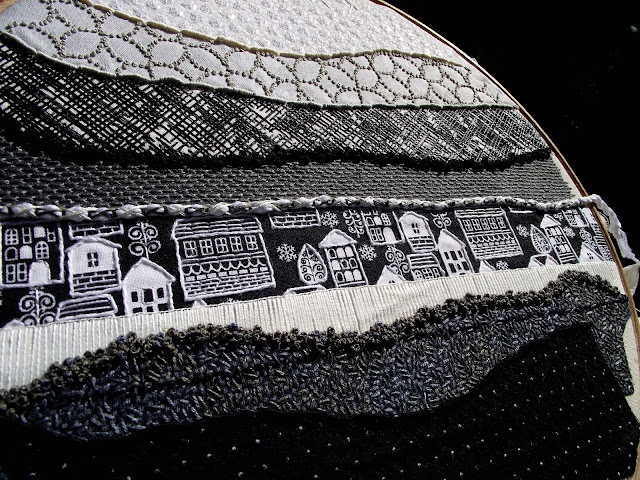 This feels a little out of my comfort zone to be honest. The lack of colour is a bit disconcerting and there is a total reliance on texture and pattern rather than complimentary colours pleasing the eye. Although you can't really see it now through the extra layers stitched over the top, one of my favourite fabric slices is the bottom one as I tried something a little new. The polka dot print above the houses fabric was turned rather successfully into brick like striped layers, and the bottom polka dot print has been turned into Pistil stitch chevrons! Pistil stitch is essentially a French knot with a tail, you bring the needle up through the fabric, twist the thread around the needle and go back through the fabric a little way away- the knot then sits where the needle has gone back through the fabric. It's a really subtle texture and I love it! 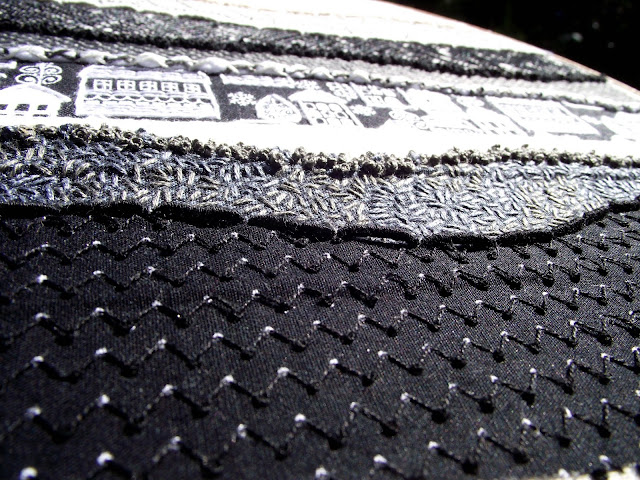 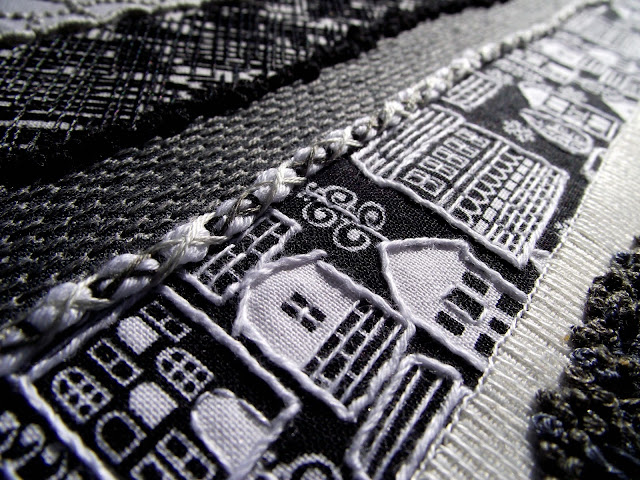 I also tried something else a little new, making my own cord out of several lengths of embroidery thread. I couldn't decide on what stitch to put above the houses, knots didn't feel right but couching down yarn didn't seem right either. Eventually I hit upon the cording idea, which was made out of white thread, then couched down at every twisted interval in black thread. I then whip stitched two different colours over the top of the cord to tie it all together with the black/grey/white, making a kind of cross hatch over the top of the cord, which also mirrors the crosshatching in the fabric above. 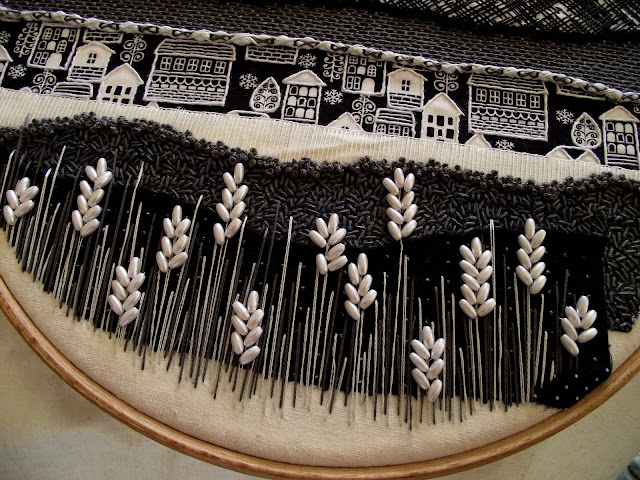 Coming down to the final layer, this stitchscape needed something fun and bold in the foreground to bring it to life- which I hope I have done in the form of seed bead 'moon flowers'! Called so because the pearlescent colour of the beads reminds me of moonbeams. Each little bead has been individually sewn on, and they kind of look like Lavender heads, or maybe wheat? Of course, I couldn't just leave it at that, so extra stitches were added in until.... 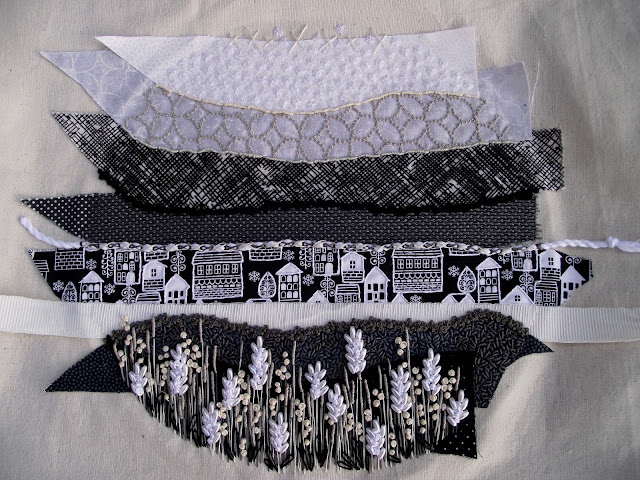 ...this happened!
Please excuse the slightly crumpled and un-ironed look. I did actually spend ages ironing it last night, but the creases never seem to really leave until the fabric is stretched out again. 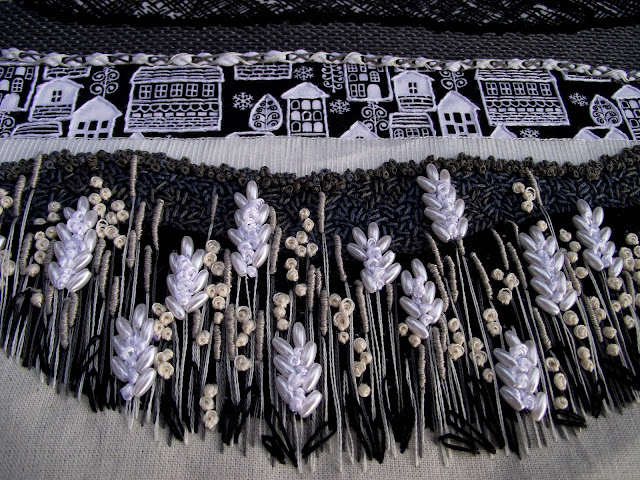 So, in addition to my moon flowers, the flower bed is a tangle of bullion knot flowers, large french knot flowers and detached chain stitch leaves breaking up the stripy monotony. The gaps between the beads have been filled with more French knots, but I used the DMC silky embroidery thread which is quite slippery and doesn't create neat, tight knots, giving an extra fluffiness to the flowers, almost like they are about to launch feathery seeds into the night. I also like that the thread has the same lustre as the beads- a side effect that really appeals to me and ties the flowers together, don't you think? 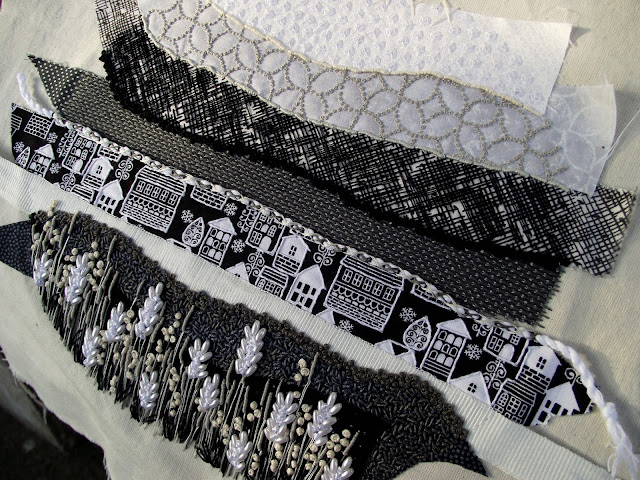 So, as usual, my breakdown of stitches in this 'scape are: back stitch, straight stitch, seed stitch, pistil stitch, detached chain stitch, bullion knots, french knots, whip stitch, blanket stitch, couching, and of course, beading.
Much as I have enjoyed the challenge of only using such a limited colour range, I think my next few stitchscapes will have slightly more of the rainbow involved!! 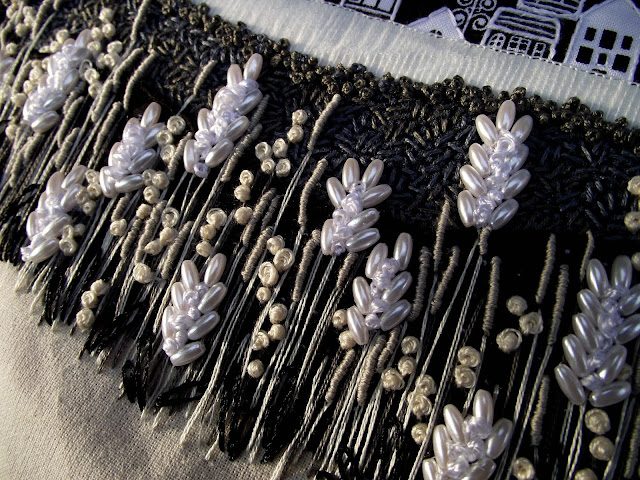