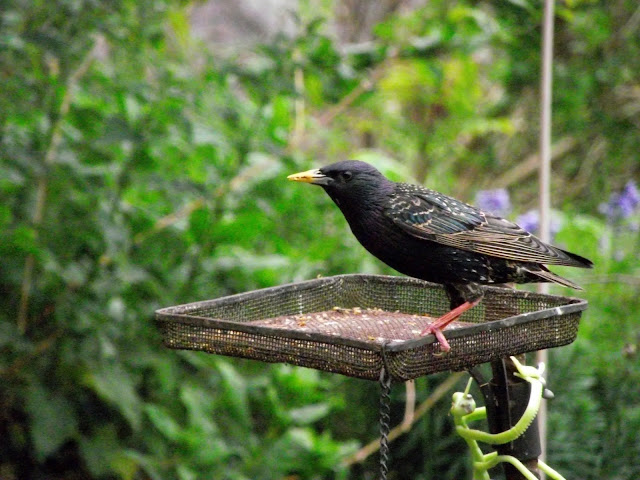 Starling parents work so hard. I imagine most bird parents work pretty hard, but we currently have two families of Starlings in the garden who we are delighting in feeding and watching their comical ways. Initially the baby Starlings didn't come in to the garden and sat in the Chestnut tree next door, shouting at their poor harassed parents who were ferrying food backwards and forwards like there was no tomorrow! The squawking and screeching is quite intense and makes everybody want to put something in that permanently open bright yellow beak just to make the noise stop. 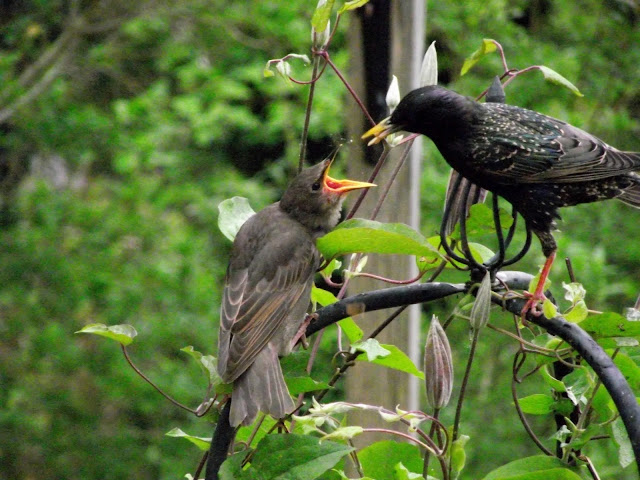 They have become bolder now and come in to the garden to sit on the feeder, quite literally on top of the dried mealworms we put out, but they still won't feed themselves, waiting for their parent to shovel in the morsels at top speed rather than picking the worms up in their own beaks. I imagine the proximity makes it easier for the parent birds though, less flapping too and fro- I wonder how many air miles they clock up on average? 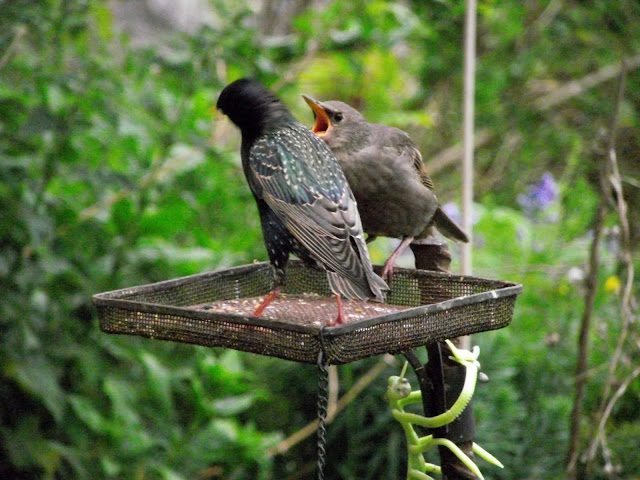 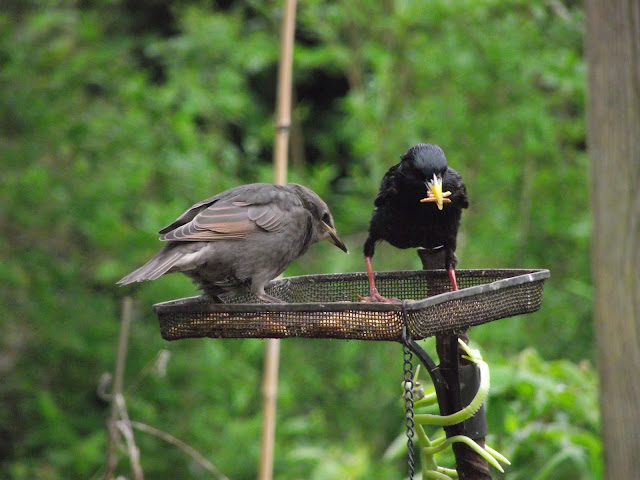 We used to have hundreds of Starlings in the garden. I remember when I was little we used to put water soaked stale bread out on the lawn and the Starlings would descend on to the grass in a seething mass of squawking black feathers until all the bread had disappeared whereupon they would leave as swiftly as they had arrived. Through the years the numbers dwindled down and seeing even one Starling became a rarity so we are thrilled to be seeing more back in the garden, especially these funny young ones. 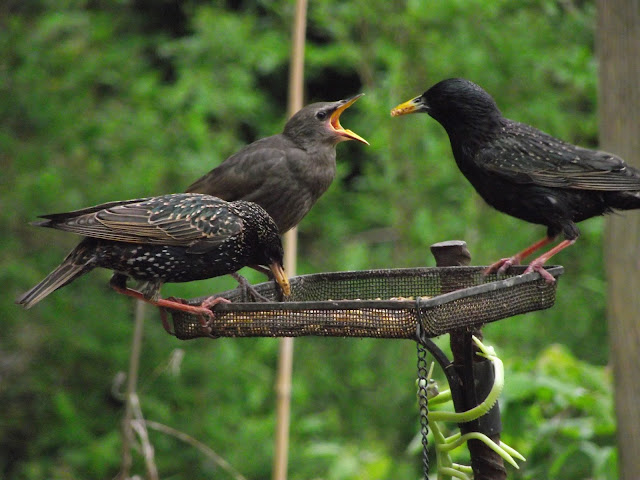 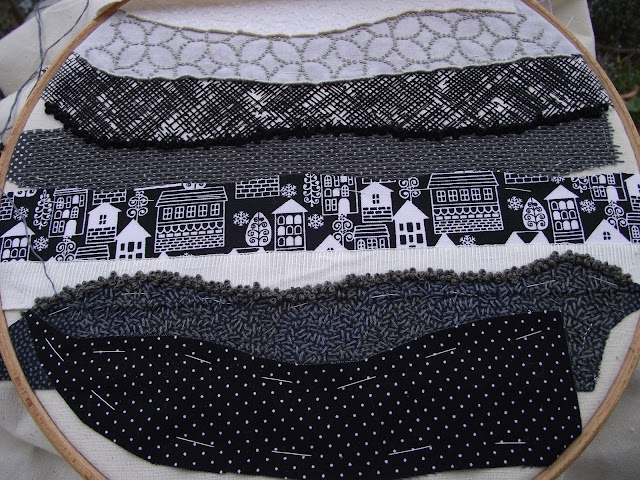 It occurred to me that the parent Starlings were pretty much the same colour as my current stitchscape (a good link there, don't you think?) which gives me a great opportunity to show you how my black and white 'scape is progressing. There are only two layers left before I can start playing with 'foreground flowers', the polka dot at the bottom and the white houses which I am still debating on how I want to approach. 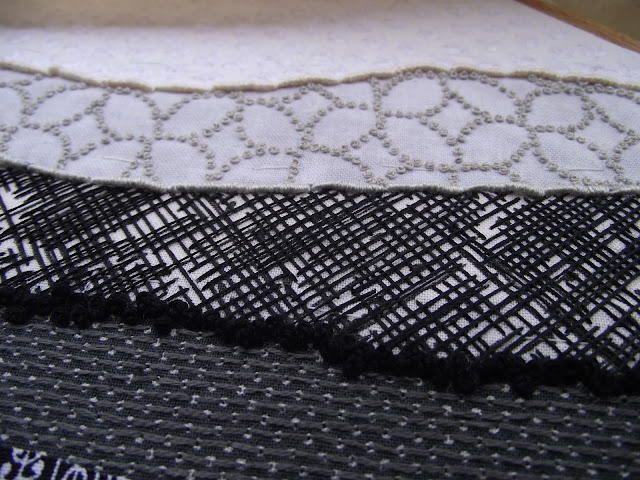 I really like the top layers though. I have stitched colourless clear sequins to the white at the top which adds a fantastic sparkle when you move around the embroidery without detracting from it in any way. The grey layer underneath has the tiniest little French knots following the line of the pattern (so cute!) and the crosshatched fabric has again been followed with long stitches in DMC Silky embroidery thread which adds a lustre almost mirroring the sequins up top. 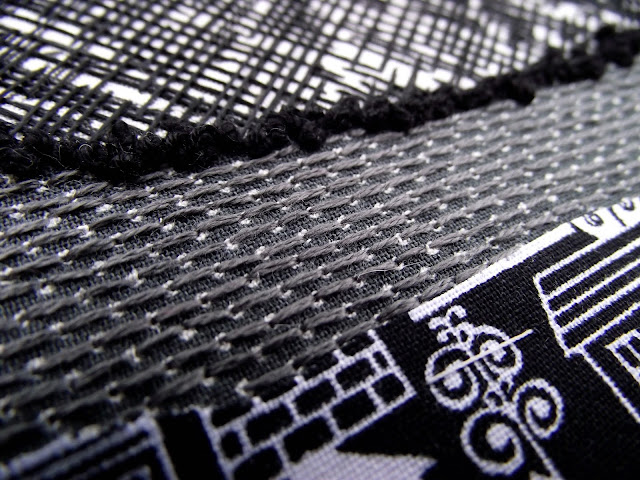 My favourite layer is very unobtrusive. I have stitched very simple rows of back stitch following the lines of the polka dot print underneath. As the stitches themselves are offset, it kind of reminds me of brickwork, but as the lines are so close together, it's very smooth feeling, like a sateen woven fabric, and doesn't really look like I've stitched it at all. Would you know it was originally a polka dot? 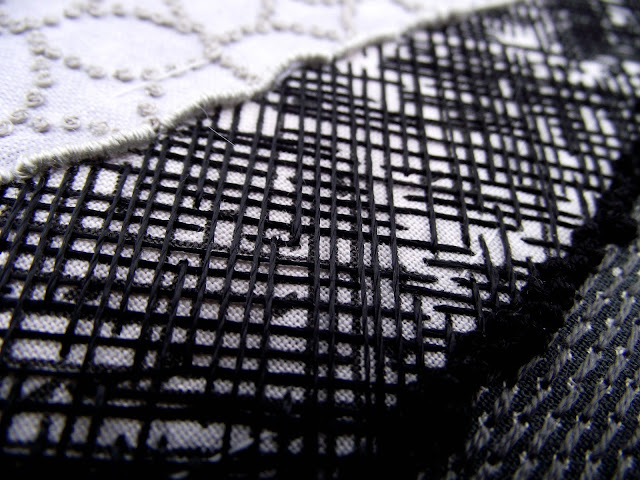 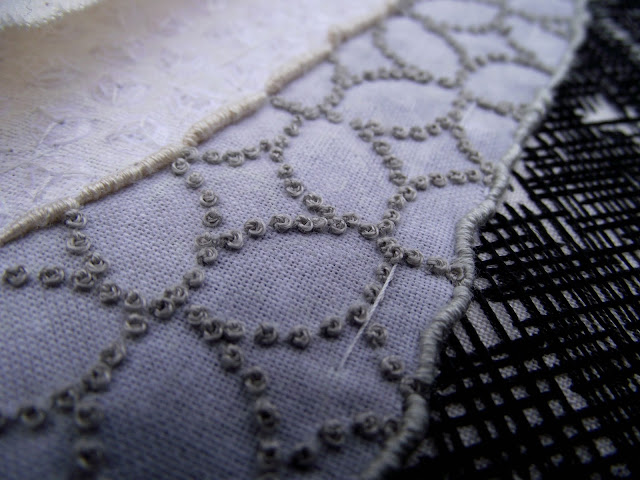 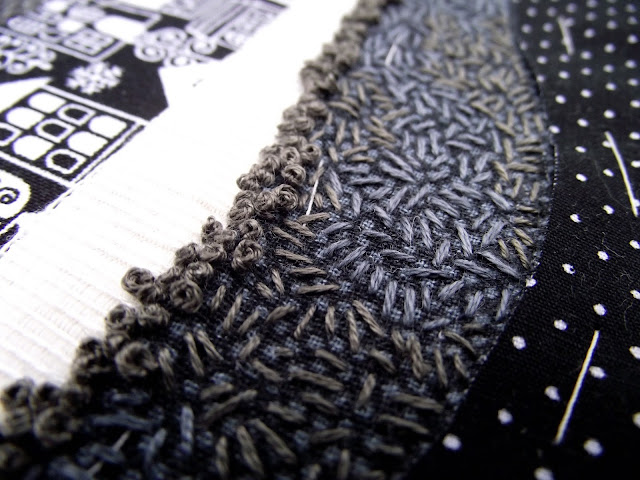 Lower down, I've played with seed stitches hiding the dots of the fabric, and have used two different colours to create a mottled effect- the same way I created patches of sunlight on the mountains of the Flowing River stitchscape. I'm not entirely sure about one of the greys as it has more brown in it than I first realised (the light wasn't that good when I started stitching the layer), but I'm hoping that the overall colour will blend with the others once I start adding layers on top. We shall see.
The grosgrain ribbon stitched between two layers has a fine web of skinny blanket stitch over the top following the lines of the ribbing, again an unobtrusive layer that I can work on a bit more if I want to. I am getting to the exciting part where the hard graft is finished and the fun, embellishment stuff can start! 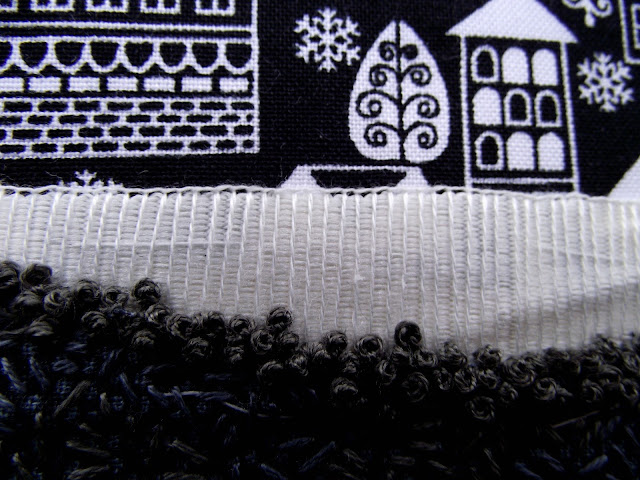