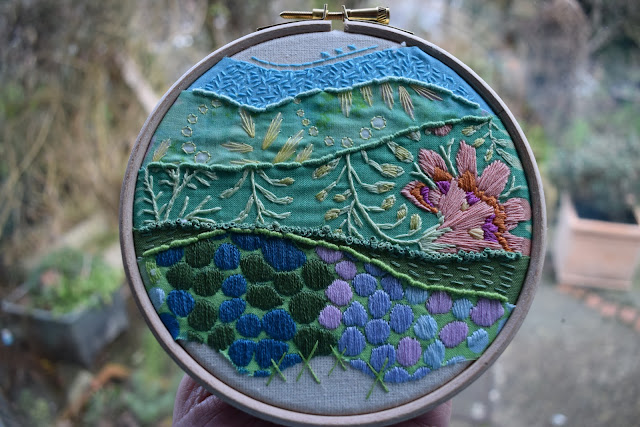 I've managed to embroider two more hoops this week which I consider very successful as my sewing time has been cut down due to being back at work five days a week again. I quite enjoyed only going in for three days two weeks in a row! I've been taking my little hoops on the bus with me, which does earn some odd looks but it whiles away the hours and takes me off into my own little world which is lovely- so long as I don't miss my stop! 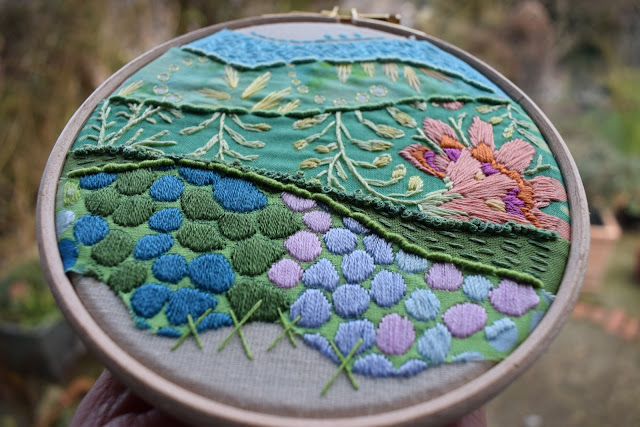 This little hoop uses some of the brighter of my recently acquired Kaffe Fassett fabrics. Bold spots and swirling florals teamed with some bright plains and a leafy batik print. It's a bit more of a fantasy than an actual stitchscape scene. My favourite part is the satin stitch flower off to the side. I've tried to match the print colours as exactly as I can, and followed it almost like a 'colour-by-numbers' pattern. The stems and buds around it have been just as closely followed with a mix of whip stitch, back stitch and a sort of messy satin stitch that is really a collection of straight stitches bundled together. It has a slightly scrappy look which I like. 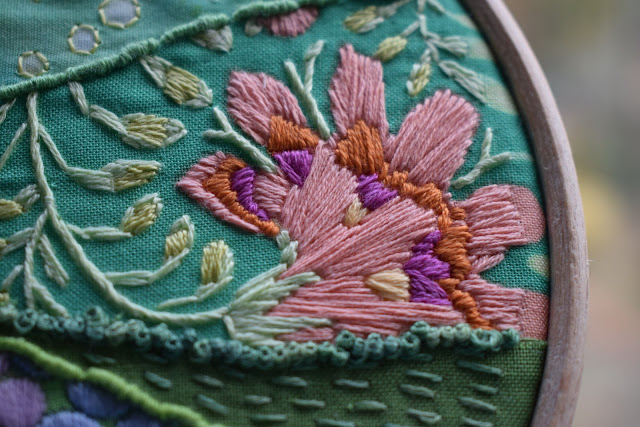 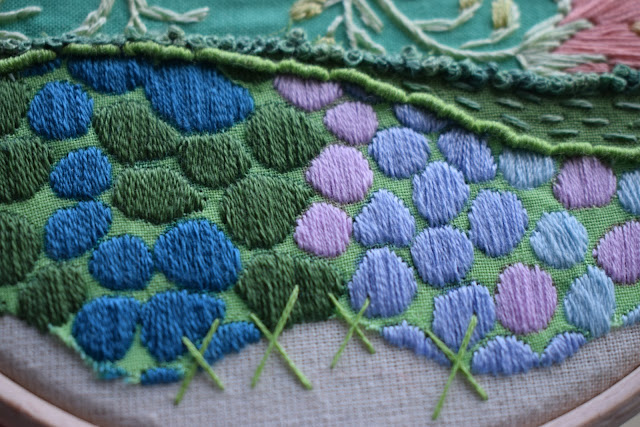 Much neater is the satin stitch at the bottom, again exactly following the colours and shapes underneath. I think when I use this fabric again, I might try mixing up the direction of the satin stitch so that it doesn't all point vertically, and also maybe just outline a few of the splodges rather than fill them all in. Just something else to think about and experiment with, but I do like the smooth feeling of this fabric layer. 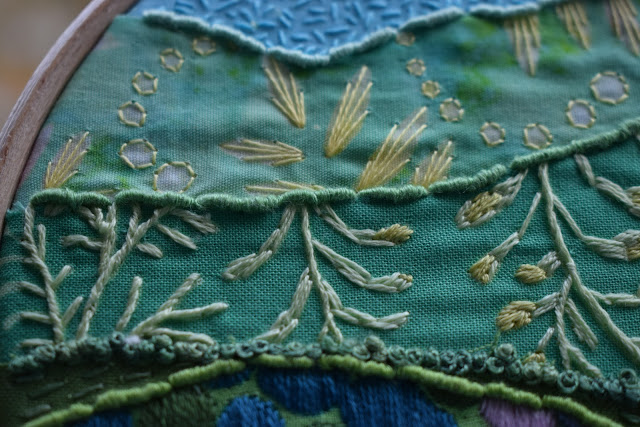 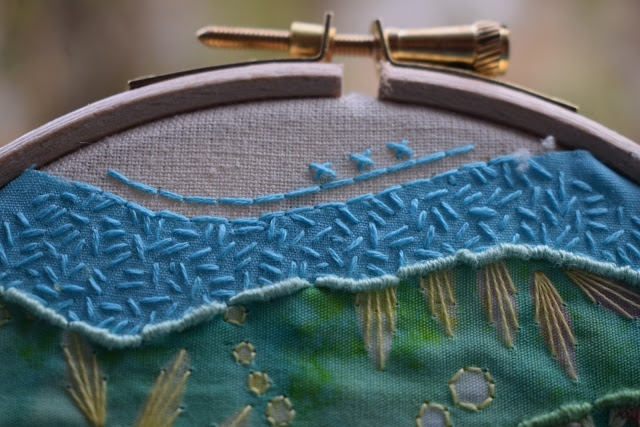 I enjoy adding these little kiss crosses to my pieces. These little #inthehoop ones don't have a clean white mount for me to sign and I don't really want to autograph the back of the hoop on the covering felt layer because pen on felt always looks messy, so these are almost like a signature in themselves. 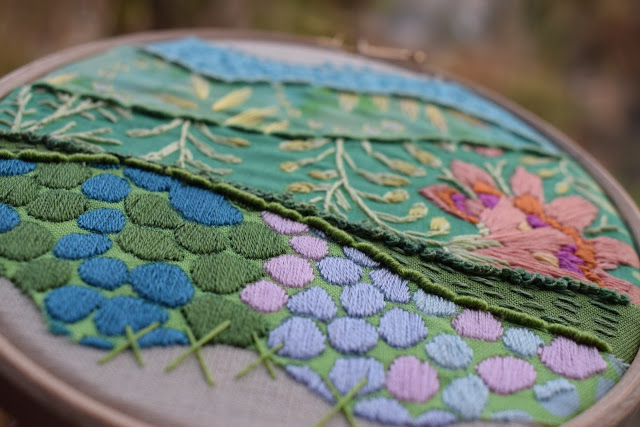 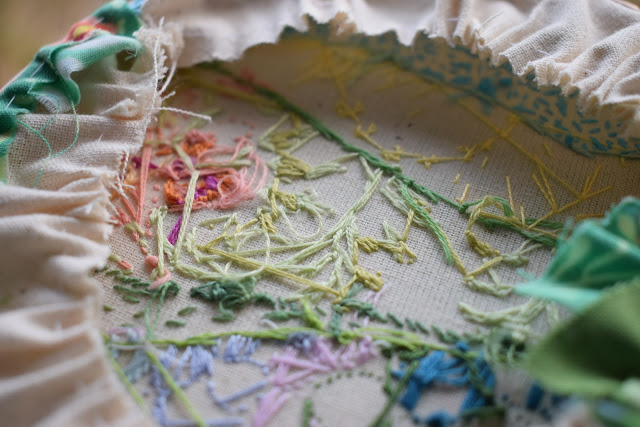 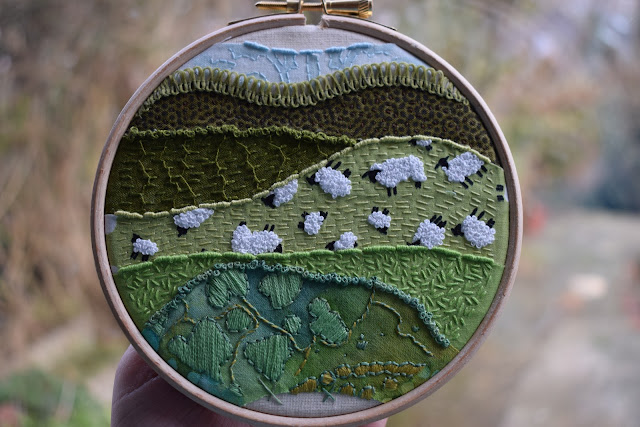 I have also finished my little rolling sheep hoop! This print makes me laugh so much, it's a little more twee than I would usually go, but the way they have all been printed in different directions makes it look like the sheep are all rolling down the hills. Perhaps they are racing? One of my friends has her own flock of sheep in Yorkshire and this hoop really reminds me of her. 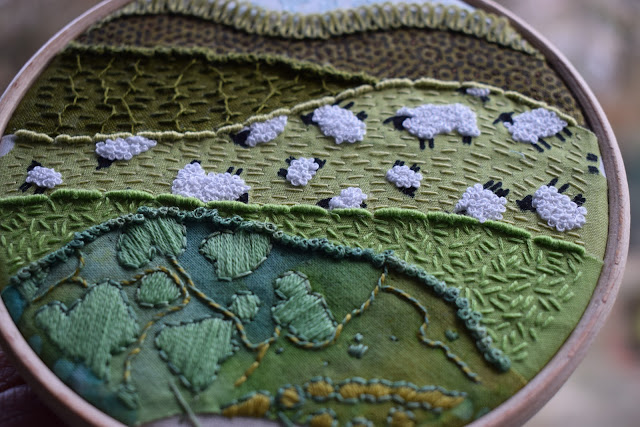 I love the different greens that have been crammed in here. The lovely batik print at the bottom has several greens blending into each other which I've tried to copy with the use of a multi-coloured DMC embroidery floss for the back stitch and french knots. The satin stitch reflects the colours of the splodges underneath, and I've tried blending these colours together with the two coloured whip stitch outlining the 'tide marks' of the wash print. 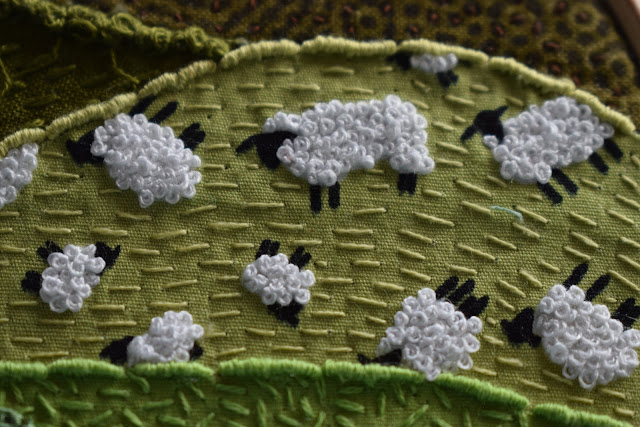 Oh those sheep! I've gone over their coats with two twist or single twist french knots to help with the woolly appearance which has worked perfectly. I might not work the running (kantha) stitch again if I were to use this fabric on another of these, there's a lot of stitching going on here and I might try just the woolly coats instead. 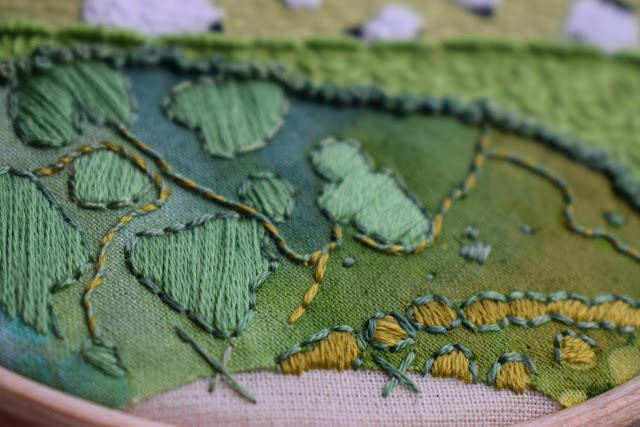 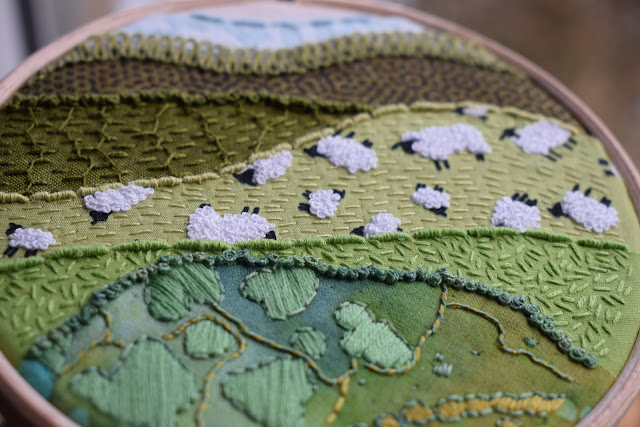 The darker top half is rather lovely also. I absolutely love doing the perpendicular whip stitch- I wonder if it has a different stitch name or not, does anyone know? I just kind of played around a few stitchscapes ago and came up with working lines of horizontal running stitch and then wrapping a vertical whip stitch around some of the stitches. It creates a beautiful texture as the vertical threads are raised up and sitting on top of the threads underneath, which also casts shadows adding to the depth of the piece.
The fancy ribbon I've used on the uppermost green layer was a bit of an afterthought. I was trying to find the right colour thread to make tiny seed stitches in some of the dots so this layer was done last. I had intended on working a row of bullion knots across the top of it but it didn't feel right and my eye came to rest upon my fancy ribbon drawer. Bingo! Looks very hedge-like doesn't it? Or perhaps a row of trees marking off field boundaries? 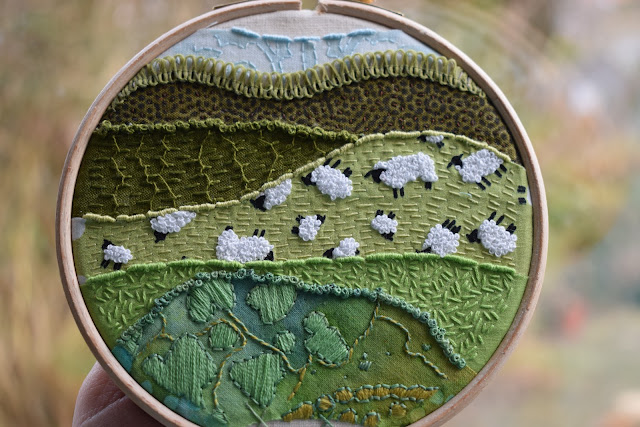