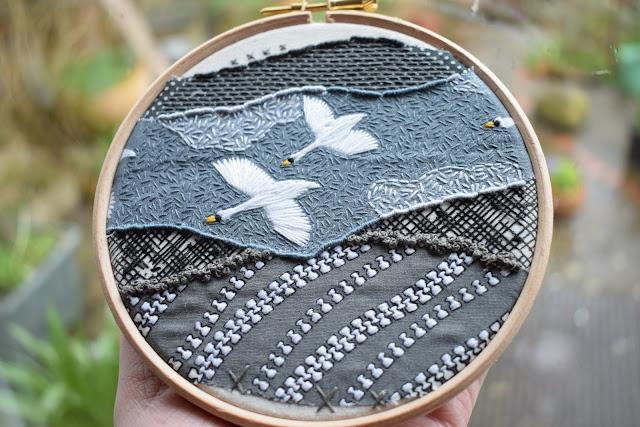 I realised that I never showed you one of my recently finished #inthehoop stitchscapes which I have affectionately named 'Swan Song'. There isn't a lot to it really in terms of layers or mixed stitches, the focus is on the swan print which I have almost fussy cut around to get two complete swans just where I want them. It makes me think of swans flying at nighttime, over roads or darkened fields, where there is only the distinction between dark and light and nothing else.
The top layer is a polka dot print where I have worked horizontal brickwork back stitch, the bottom layer is a super cool zip print and I have filled each white section with satin stitch (very little ones- it took ages!) and the layer above this has long straight stitches working the cross hatched lines, with double straight stitches on the little splodges. The most complicated layer is the one with the swans, where I have mostly worked seed stitch in the background, with back stitch around the swans themselves, and distinguishing the lighter cloud areas. The swans have been satin stitched and I have tried especially hard on this to follow the direction of the feathers on the wings which helps to make it more realistic. The eyes are single strand, two twist french knots. That's it! Apart from the cross stitches at the top and the bottom, and the bullion and french knots at the fabric edges. So simple. It's a bit like what I mentioned in my previous blog post about these pieces being complicated; the stitches themselves aren't hard, but it can get a bit tedious with the repetition and they do take a long time. You have to have patience but it is all worth it in the end. 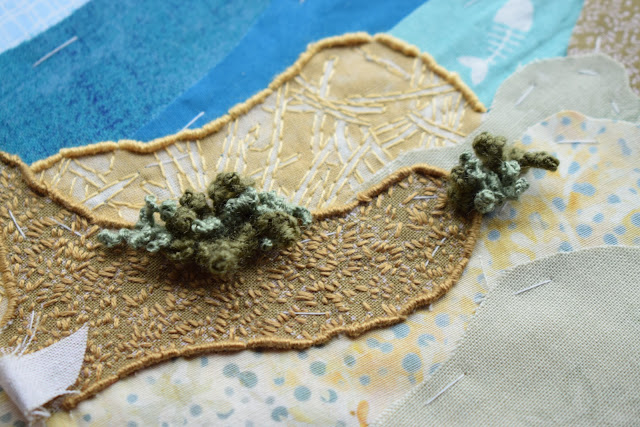 I have started working on a new larger piece that really spoke to me. It wasn't the next piece I had in mind, there are a couple of others I have prepped previously that I had intended on working on next, but I was flicking through an old Gardener's World magazine that had been left on the kitchen table during a sort out, and an image of Sea Pinks nestled into a crevice in a moss covered rock caught my eye and set my mind racing! Now I know what you will be thinking, as I'm sure you will have unanimously have had the same thought that I did - Drizzle Stitch!!! Recreating the moss would be absolutely perfect in drizzle stitch, there is nothing better (expect perhaps moss stitch), and to set these rocks against the blue of the sea would be so lovely and summery, I can almost smell the salty seaside air, can't you? 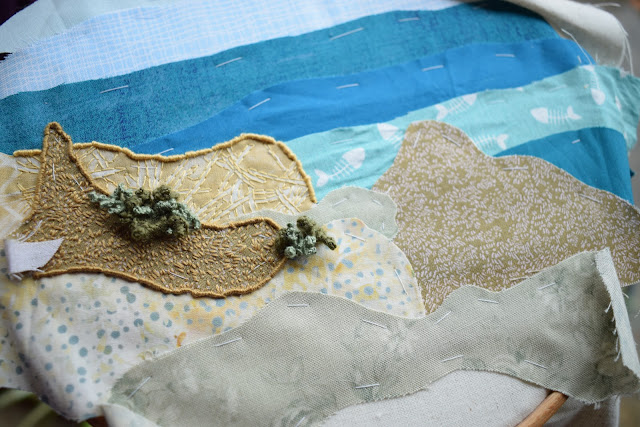 Immediately I started pulling out all of my rockish fabrics and layering them up with some sea and sky blues, tacking them down and barely pausing before starting immediately on these 3D stitches. Usually I would take my time and work the back grounds of the rocks first, but I was so excited I had to satisfy my need to see what these stitches would look like, what kinds of threads I could use to create the textures. So far I have used a Stylecraft Special DK acrylic yarn, and a DMC thread but I'll have a hunt around and see if there is anything else I can use. Maybe I could get some tufts of cotton scrim out (once the cat has moved himself off of the carrier bag I was keeping it in- he must sleep on carrier bags!) and mingle these in with the stitches as well. I'm so excited to see where this one goes! 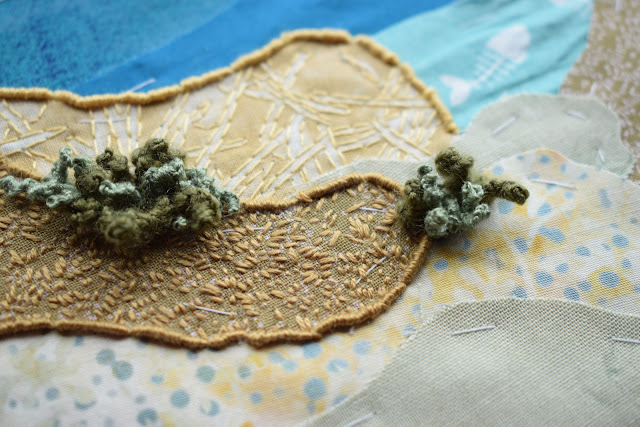