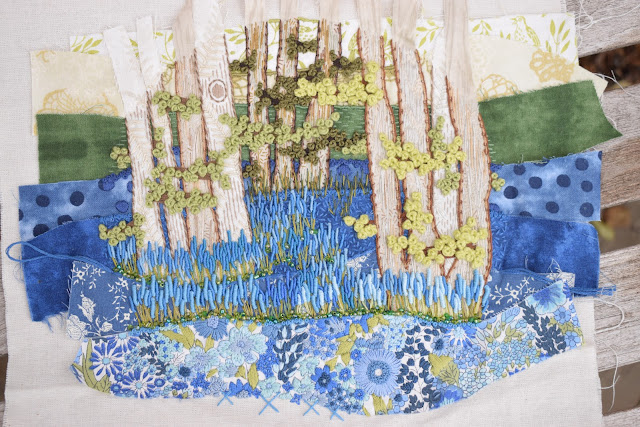 I started this Bluebell inspired piece in April when Bluebells were still flowering in the woods! What with one thing and another, this poor Stitchscape got put on a back burner until I could no longer stand the sight of it staring pitifully at me, boring holes into the back of my head whilst it waited impatiently to be finished!
I took it with me on my family summer holiday to Cornwall, determined to complete it- which I didn't - eventually finishing it off at home with rather a sigh of relief! 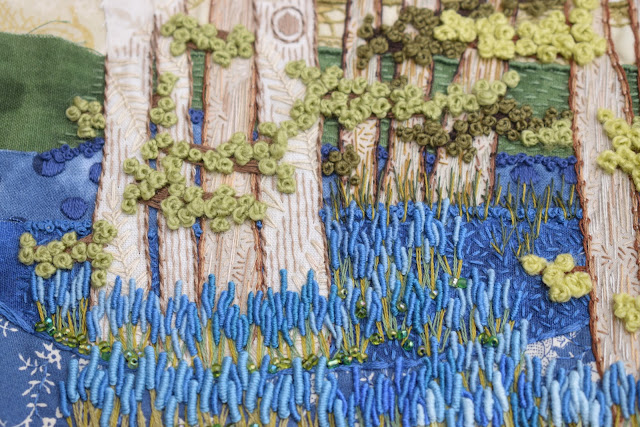 There are LOTS of bullion knots in this piece and goodness knows how many metres of embroidery thread have gone into the making of them. On the plus side it finished off quite a few of my random oddments of blue threads I had cluttering up my thread box and the variances in colour help to create the idea of light and dark shadows filtering through the tree canopy to the woodland floor below. 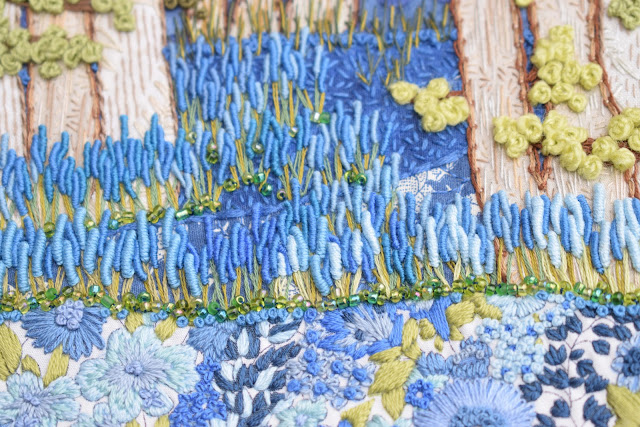 I don't know how well you can tell but I have tried to add in perspective with the bullions in that the ones higher up in the piece (further away in the landscape) are smaller in both size and number of threads used, and slightly darker. The second row of bullions are slightly longer and thicker, using three strands of embroidery floss rather than two and the third row (bottom) use between three and five strands of embroidery floss to make much chunkier bullion knots and give the sense that they are closer to you - as well as using lighter colours to hint at the sun shining on them. 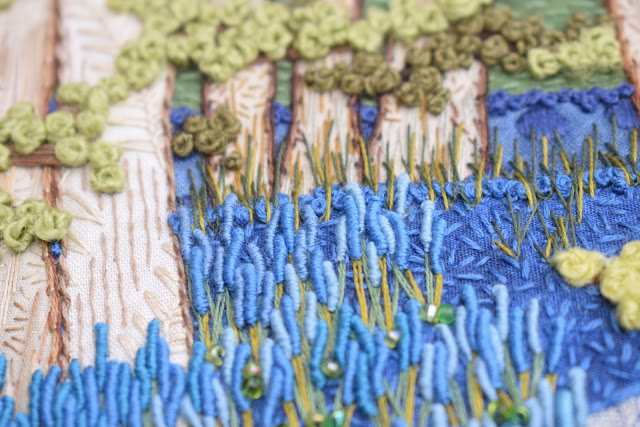 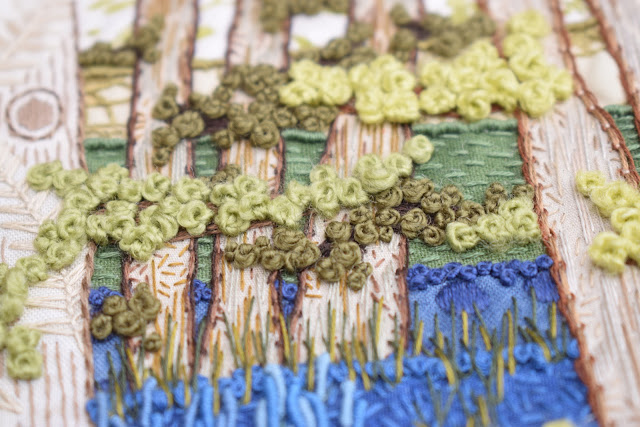 The idea of light and dark helping to create perspective has also been put into the chunky french knots in the trees. I have used my technique of stitching with Stylecraft Special DK acrylic yarn, stripping down the three strands to two to make chunkier french knots without it being impossible to handle. The darkest green colour is only used on the branches of the tree furthest away (highest in the Stitchscape), with a mid range on the left hand tree and the lightest green on the right hand tree that appears lowest and therefore closest. The number of french knot twists increases to go with this idea, more twists on the right hand tree. 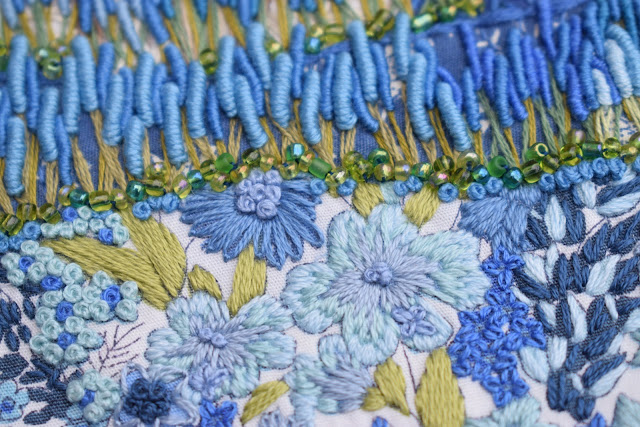 Every layer in this piece seemed to take an age to complete, none the least this bottom layer with the multiple flower pattern. At the time of piecing together the fabrics for this Stitchscape, the fabric seemed to fit perfectly - being Bluebell in colour but not requiring me to make thousands and thousands of Bluebell bullion knots. Instead there are a lot of detached chain stitches, straight stitches, satin stitches, french knots... lots of things going on! 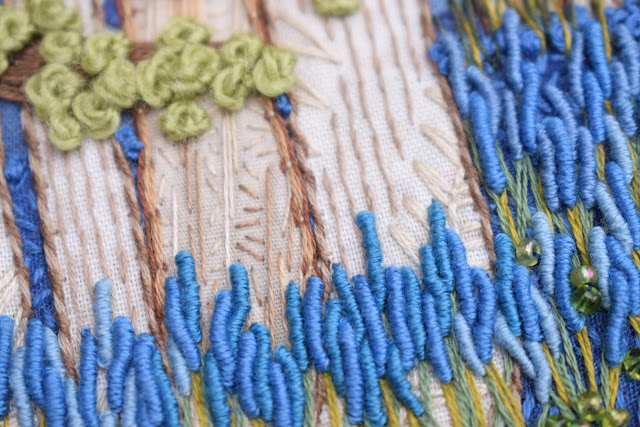 The tree trunks were worked slightly differently depending on the fabric print that has been used on them. The lighter fabric is a batik with faint lines of ferns in it and I have gone over this pattern with chunky fly stitches, joining them together to keep the fern-like appearance. Between the fern patterns is quite a straight whip stitch to link it all together. The darker fabric is actually a wood texture print, but much larger scale than the tree scale I have here. I have made long straight stitches in various colours over the wood grain texture and, in the gaps between them, filled it with random seed stitches, again in a variety of colours and using only a single strand to keep quite a delicate texture overall. The branches of the trees were added on afterwards with a really rough satin stitch that you mostly can't see because of the french knot layer above it and the edges of the trees have either been done with whip stitch or pekinese stitch in different colours. 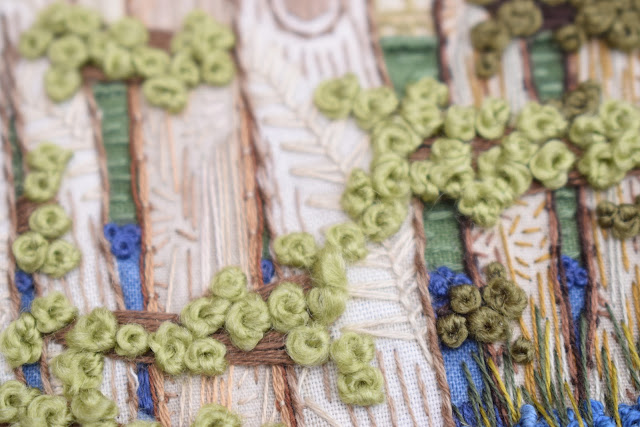 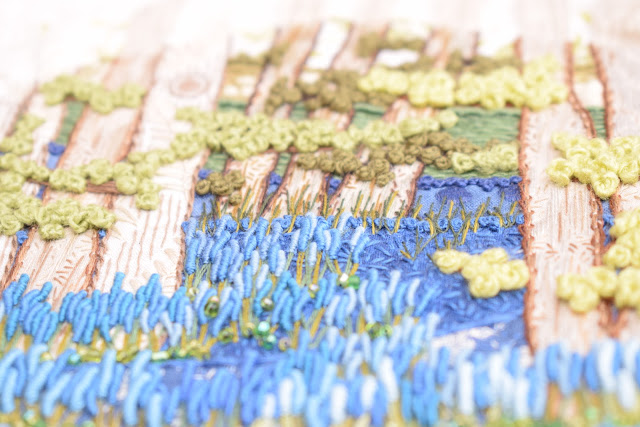 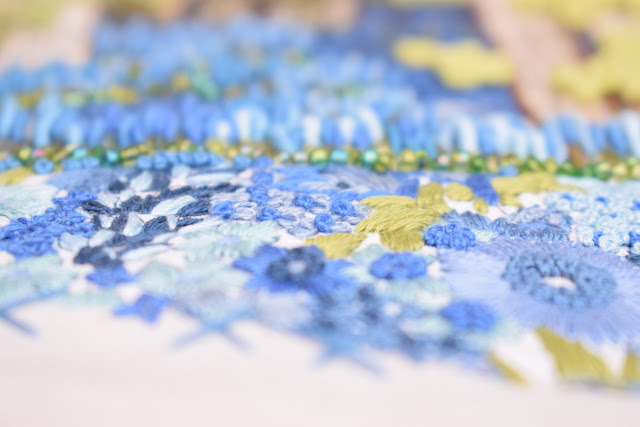 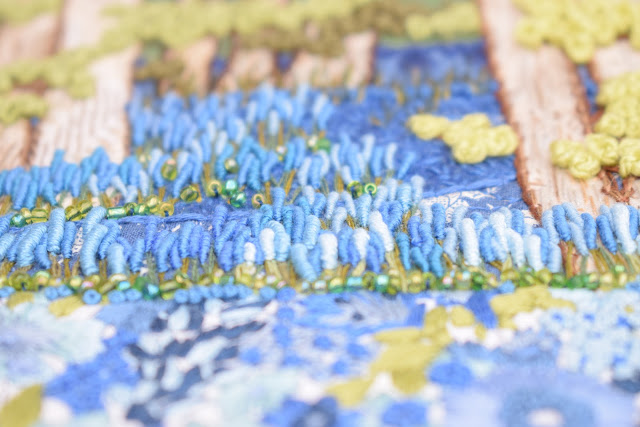 The beads were added towards the end as a slight afterthought really as the whole Stitchscape appeared a bit matte and boring. It needed something to lift it so I have used a random assortment of mixed green beads, some matte, some pearlescent, mingling in with the Bluebell layers and separating out the Bluebells from the mixed flowers. A bit of bling for my Bluebell Woodland. 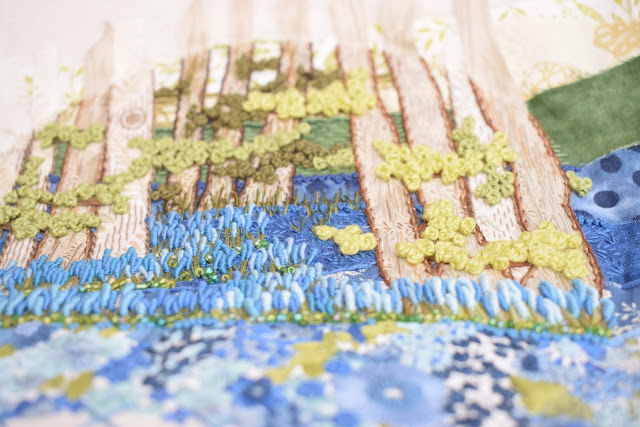 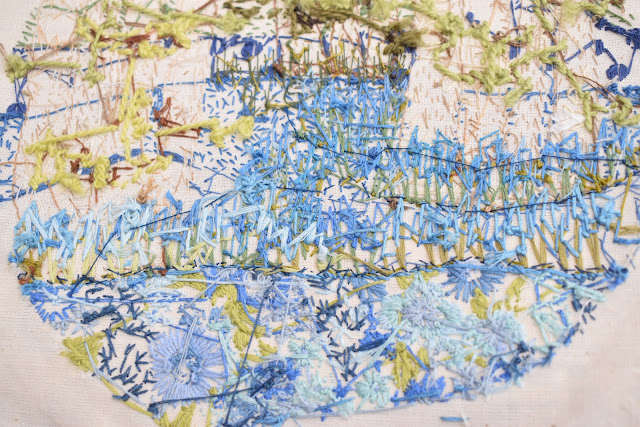 The back of this piece is just as jam-packed as the front with trailing threads, knots, those loops of thread you don't realise you've made until its too late... it's messy but you can still totally see what the image is!! I love looking at the backs of these pieces, it reminds me to loosen up sometimes and not be quite so tight with what I'm stitching. 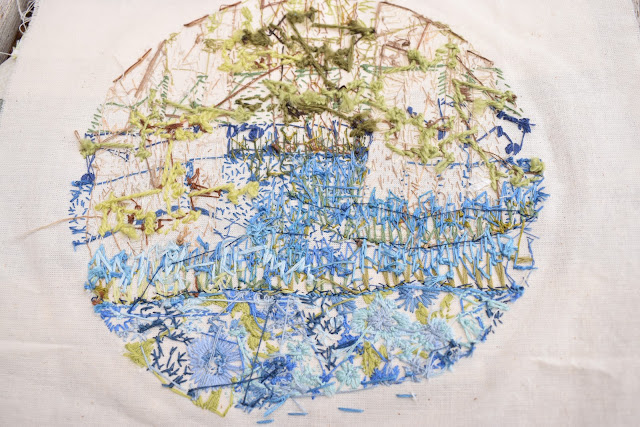