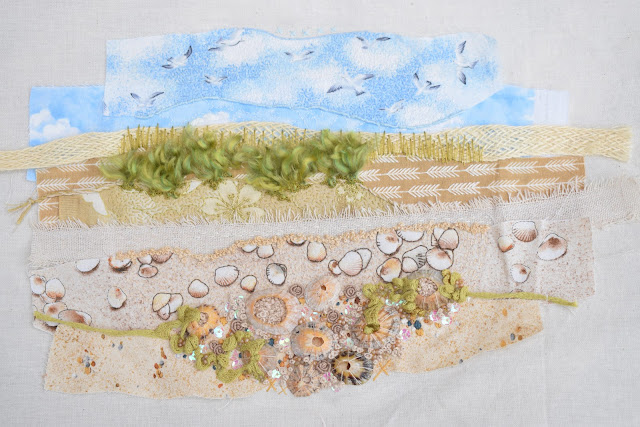 During my summer holiday in Cornwall I had an idea whilst on the beach to collect pre-holed Limpet shells and use them in a Stitchscape. The holes were a pretty specific requirement because I've stitched different shaped shells on before and had to cross over the shape like a shisha mirror because they are mighty tricky to put a tiny little hole in! Holey Limpets are much easier to work with as you can go around them almost like a giant, textured sequin and they look great! 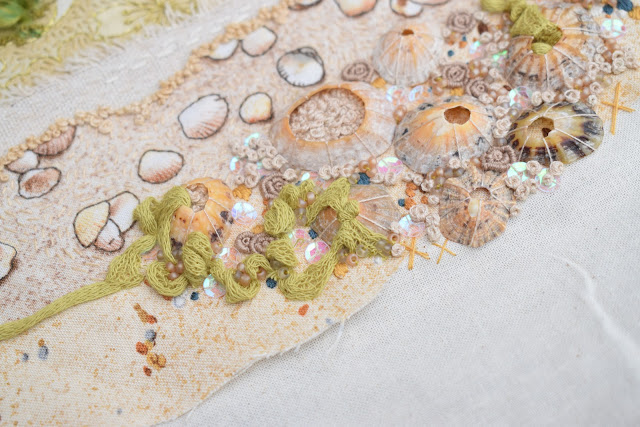 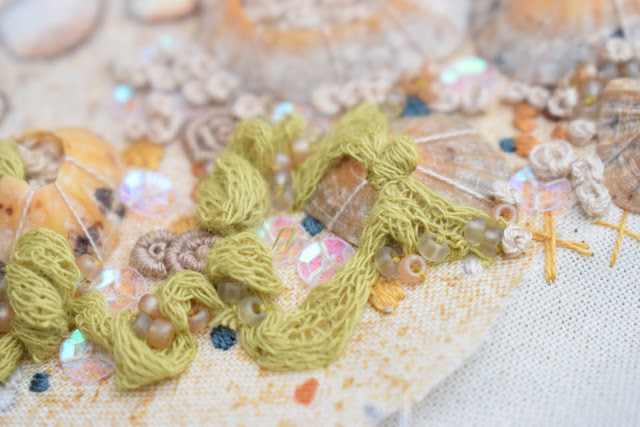 I had great fun trying to recreate a beach texture - the sand and pebble print fabric I have is brilliant and I went over each of the bigger pebble shapes with a rough satin stitch, following the colour of the print below. The larger limpet shells were filled with some quilters batting that was then completely covered with french knots and I found in my stash a brilliant knitted tube yarn which looks exactly like seaweed and can be played around with and pulled in different directions. This is such a textural fabric layer with the hard shells combined with this bouncy yarn, tiny little matte beads, french knots, bullion knot barnacles, clear sequins which flash pink and blue in the light as you turn the Stitchscape. It looks exactly how I wanted it to and I'm so chuffed!! You can almost smell the salty air. 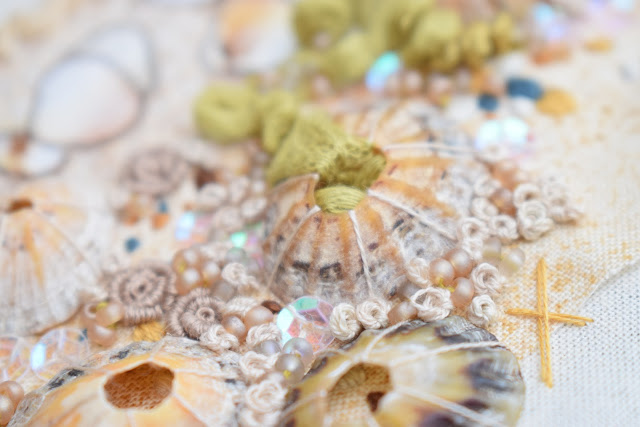 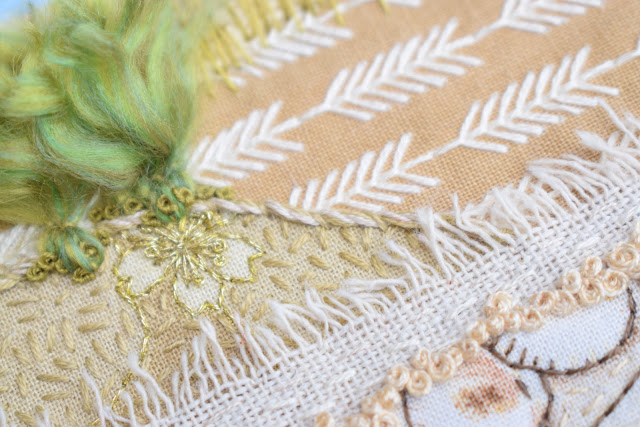 The green fluffy layer was good fun to make. It is using a fantastic yarn I picked up in a sale in Hobbycraft (and have used in many Stitchscapes now), which is actually more like a loosely woven roving, bound together with a strand of black thread to keep it in check. Once you take that off and tease it apart, you probably could felt with it and the shades included are gorgeous. I've taken small snippets of them, stitched down the halfway point, folded the halves up and secured it with a couple of stitches to keep them upright. Each little cluster has been stitched down individually, and then bedded into the ground with some french knots. 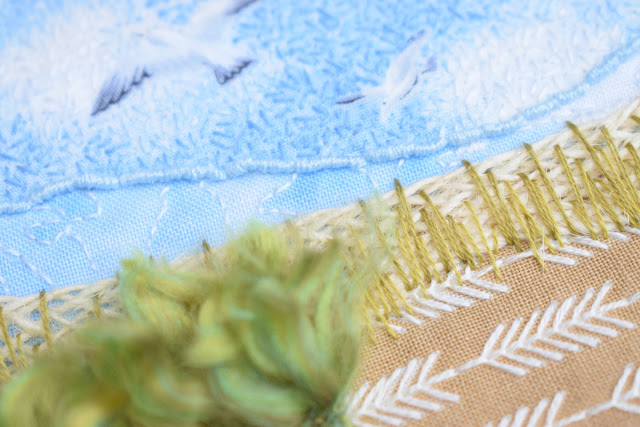 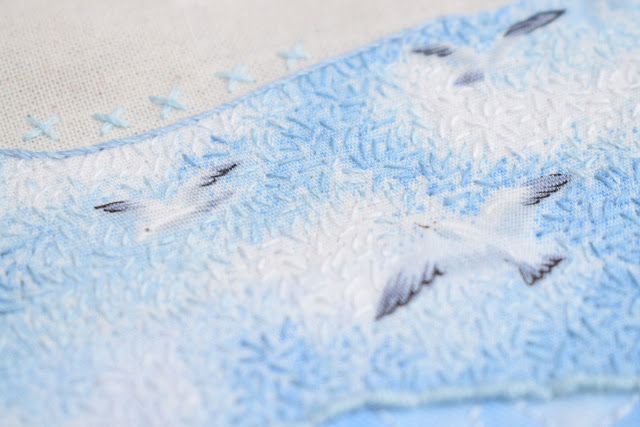 The other layers have been kept pretty simple really, with the main focus being on the shell layer at the bottom. Most of the fabrics have just been treated with a going over of what was already there- this fabulous seagull fabric (a slice of which I managed to snag at a workshop as I was quite literally drooling over this fabric one of my students brought in!) has been gone over in a fine seed stitch, but using three different colours as the blues and whites in the piece changed. There's a mid blue, light blue and white to really stay true to the printed colour underneath. The seagulls I have left completely alone as they have a wishy washy appearance that a: would be hard to follow and outline and, b: gives an idea that they are swooping so fast through the sky that they are practically a blur. 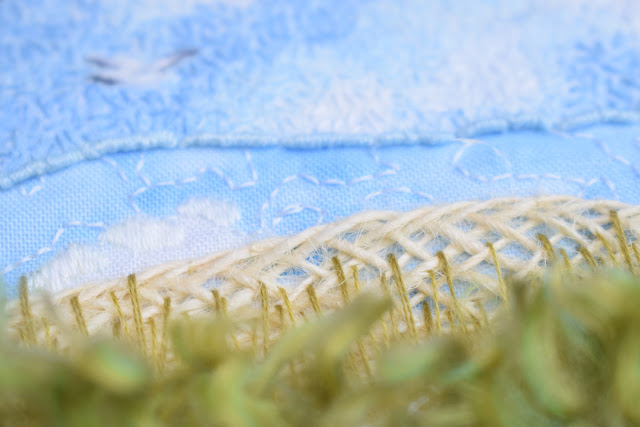 I've added a couple of fun trimmings, a lovely jute trim that I use regularly in my kits as it can be teased out to different thicknesses, and also a linen tape with frayed edges which looked pretty ragged and beachy to me. 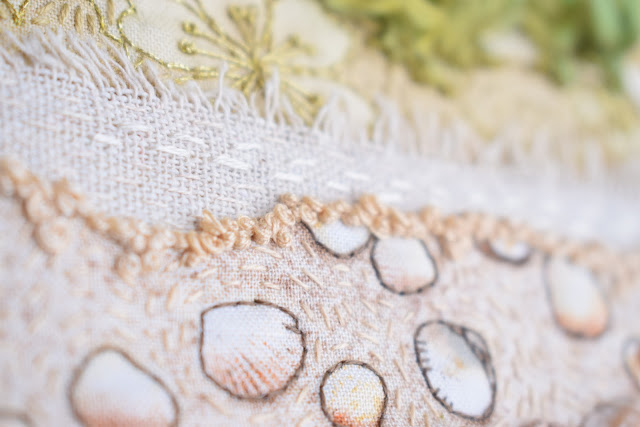 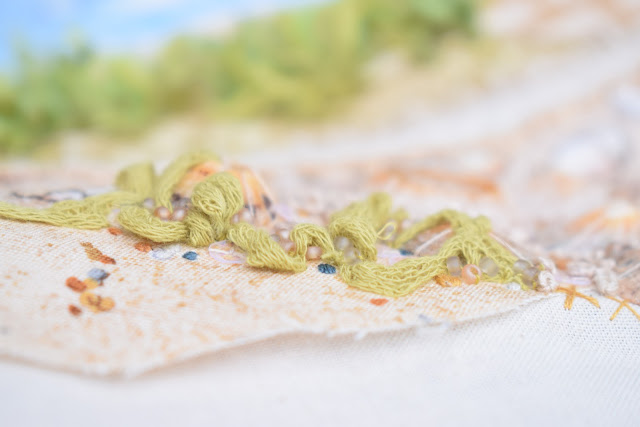 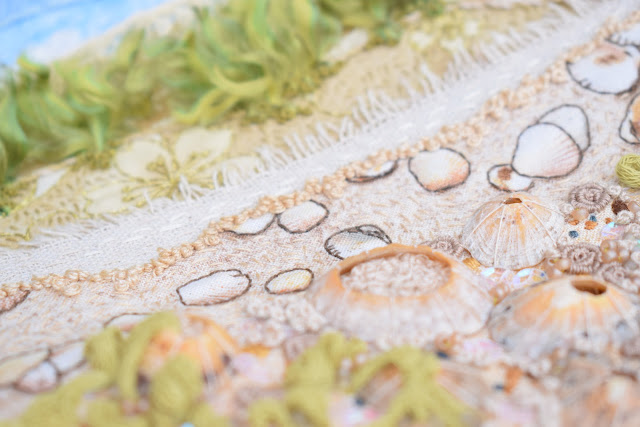 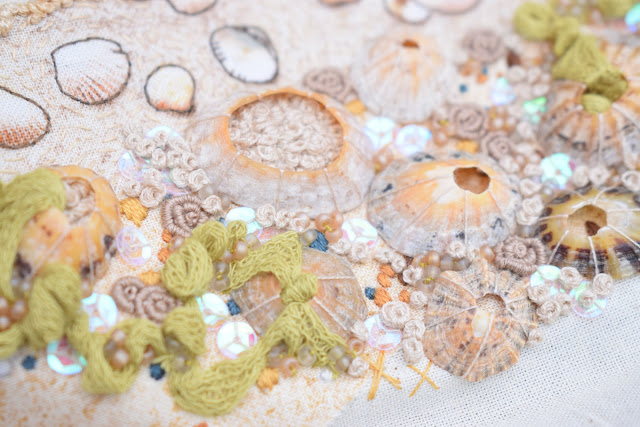 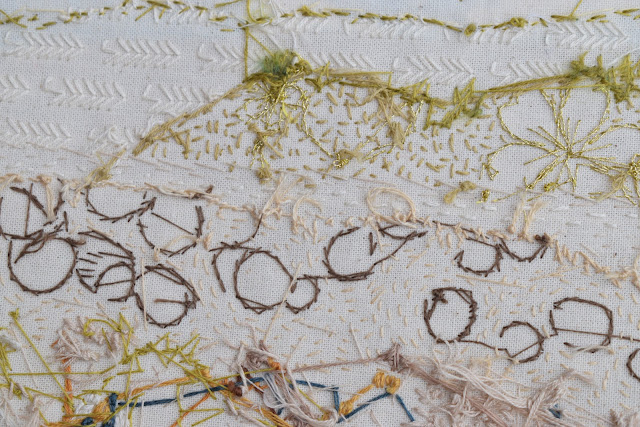 The back looks almost as nice as the front I think with a kind of abstract beach feel to it. There are so many lovely family holiday memories embroidered into this - and enough shells left over to do another little piece. 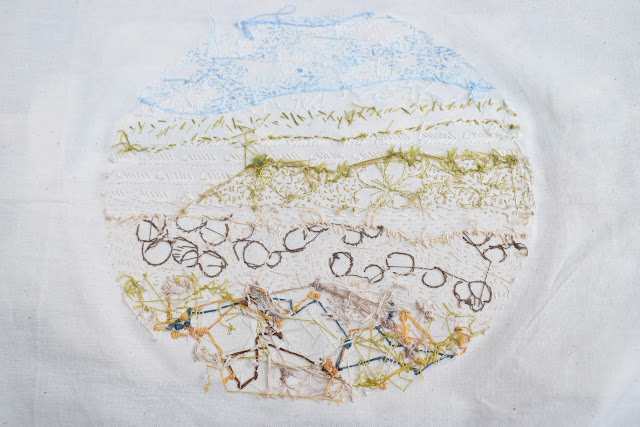