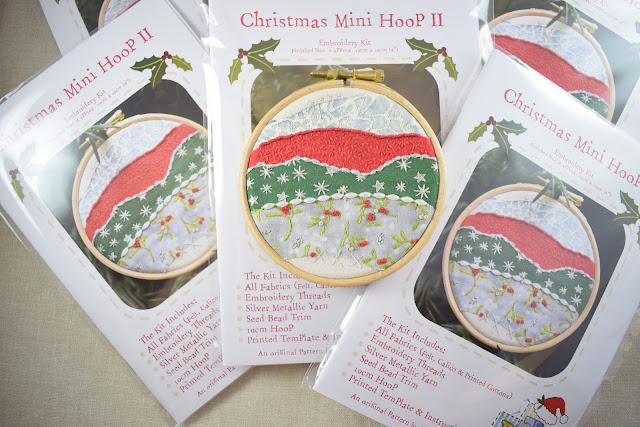 It's all been happening in my Etsy shop! Since I last posted on here, way back on the 7th July, I have released two new kits into the shop!! Two of them! Such productivity is most unlike me, usually I flitter around all over the place and rarely get anything finished but it's nice to see these out and raring to go. 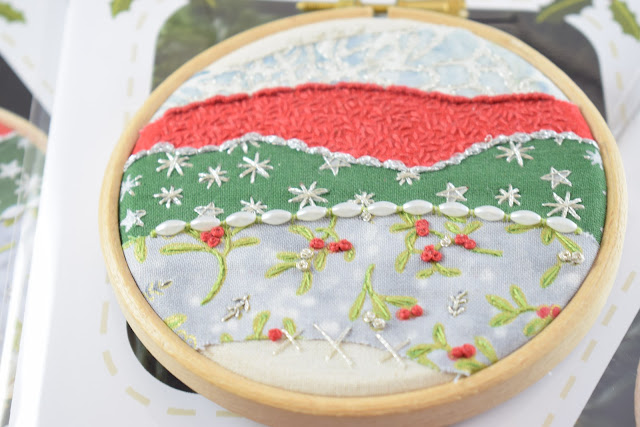 I realise that the Christmas kit is perhaps a little early and no one wants to even think that far ahead (especially this year!), but if you are making something for Christmas it's best to start around now and then you have a higher chance of it getting finished and ready - especially if you are making lots of different things. Just think of it as Christmas in July (or August as the case may be).

This kit is very sweet and is the updated version of my original Christmas kit which was released a couple of years ago and has since run out of fabric stocks. There are about three of the original ones left I think so if you are very quick you could pop both into your basket and have a matching pair! The template pieces are the same as I like the challenge of 'recycling' templates and trying them out with new fabrics and new trimmings. The fabrics in this one are really lovely and include a grey batik from Rhinetex, 'Spraytime' in Christmas Red from Makower, a beautiful silver print star on green from John Louden and 'Yuletide Magic' from Paintbrush Studio. Such a treat! They have been paired very simply with a beaded trimming (not individual beads for those sceptics out there), some silver crochet yarn and the lovely stranded cottons and metallics from Anchor and DMC. 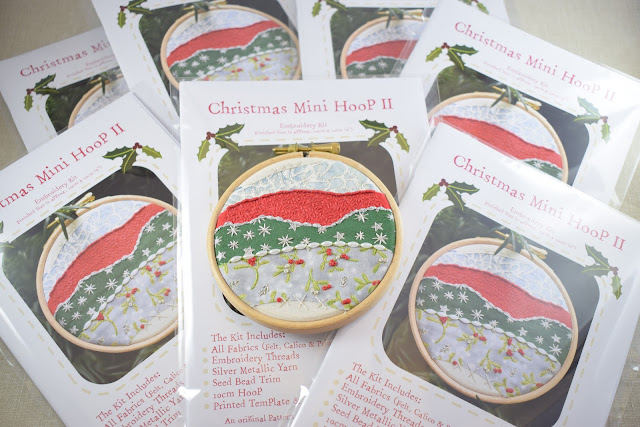 It's an easy little make so if you are just starting out on your embroidery journey then this is a good one to start with to get to know some basic stitches. As always there are full instructions within the booklet, as well as diagrams, and a pull out template page if you wish to use it. I have included the felt backing but rather than include any lace as in the original version, this time I'm letting you decide whether you want to hang it with ribbon or lace - in the photo on the front I have simply tucked it over the branch of a yew tree in my front garden and actually I think it looks rather nice!! A bit like a bizarre berry growing from the branch rather than something that's been hung from it. 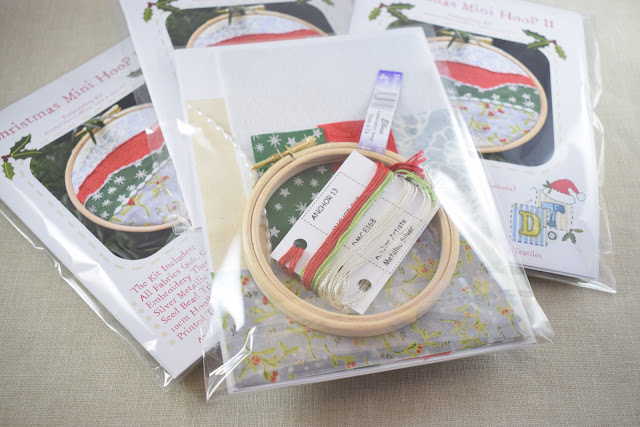 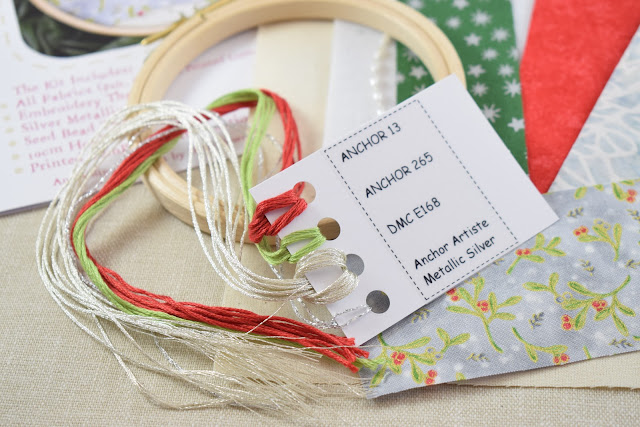 This would also make a lovely gift for someone if you are starting your Christmas shopping early. It includes everything but sewing tools and the aforementioned optional ribbon/lace so can be given at Christmas to be completed in the post-Christmas-lunch flop and over Boxing Day! If you would like to purchase one or a few, please do visit my Etsy shop or click here. 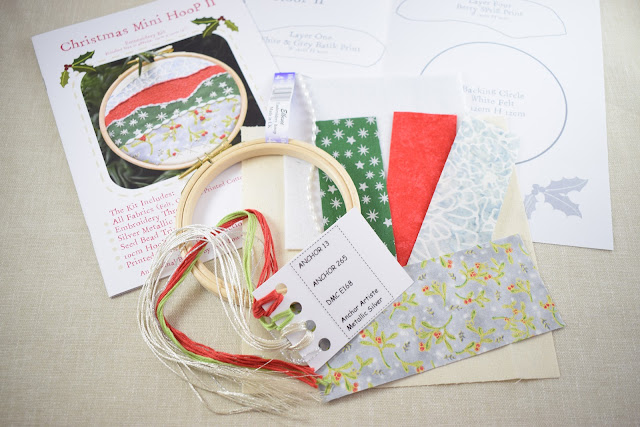 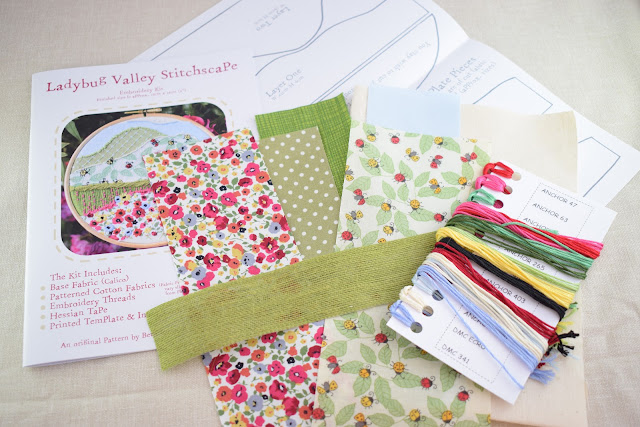 The second kit now available to you lovely lot is my Ladybug Valley kit!! I went into a bit of detail about the origins of this kit in a previous blog post which you can find here, but basically this is another re-design job as the original fabrics sold through and I've taken back the template and changed things around, tweaked, improved and generally played a bit more. I think I've flipped the design as well actually if I recall rightly.
The top fabrics are mostly the same as before as they are readily available, but the bottom two are completely new and I've done some different things with the trimming. 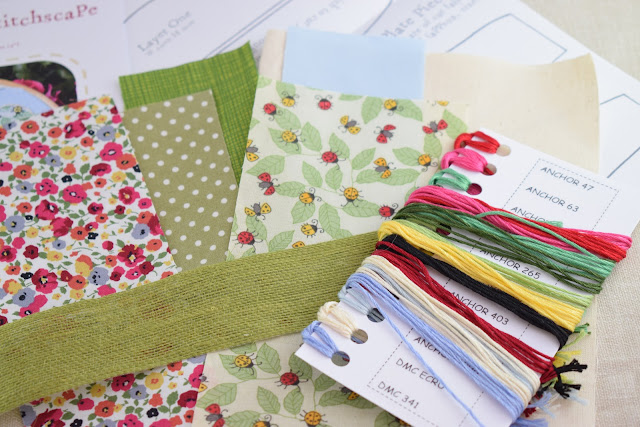 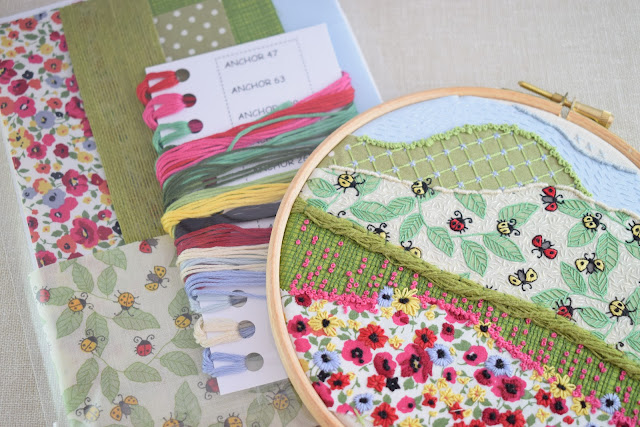 Hopefully the trimming instructions and diagram will prove to be fairly clear as the trimming in the completed piece looks nothing like what it first looks like in the kit (it's the flat green tape you can see). I've cut it in half, stripped the lengths of hessian out and twisted and stitched and pulled and teased them into a whole new thing! Which seemed like a good idea at the time... 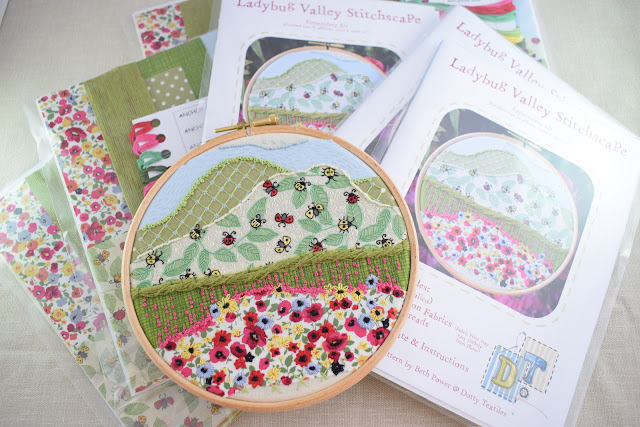 I'm excited for this one though and I hope people will like it. I find that initially new kits can be slow sellers but they gradually gain momentum and I end up permanently behind in the making up more schedule. It's a bit harder to keep on top of all of these kits now I have so many current designs as well - working part time three days a week does get in the way rather when you need to have a serious cutting out session!! Cutting fabrics for these and preparing them for kits can take at least a day to do and that doesn't include combining them or putting together the thread cards. They are a real labour of love!
If you are interested in snapping up a Ladybug Valley kit then again they are in the wonderful world of Etsy, or you can click here to be fast tracked directly to the page! 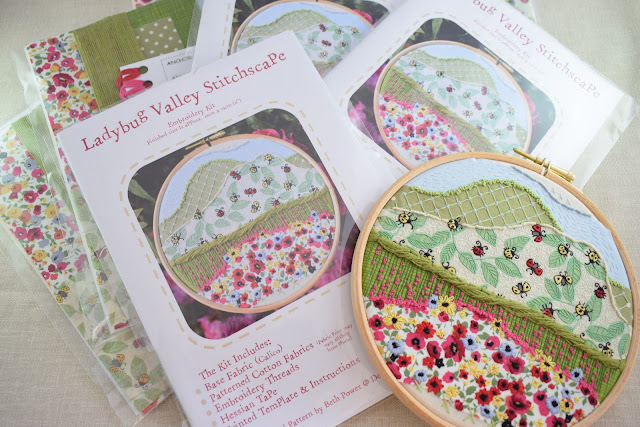