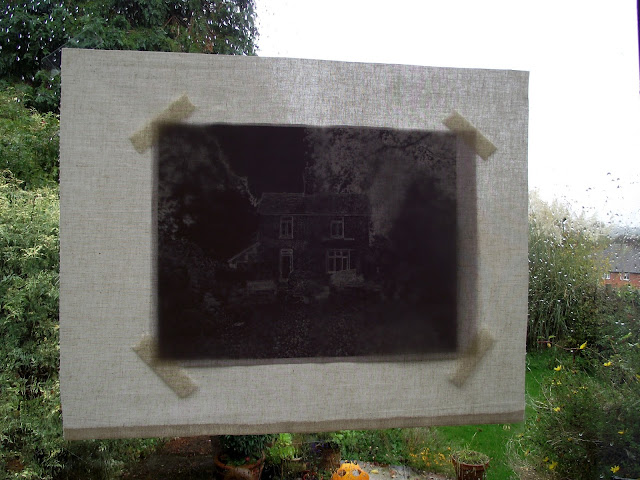 I have been working very hard on a special Christmas present for my Grandmother. I think I am pretty safe putting this on here before the big day as she's not very computer savvy (just not interested in learning). She is moving house just before Christmas- I mentioned previously that she is downsizing due to the enormity of the garden, and I thought I would make a little something so she can keep the memory of the old house in the new house. 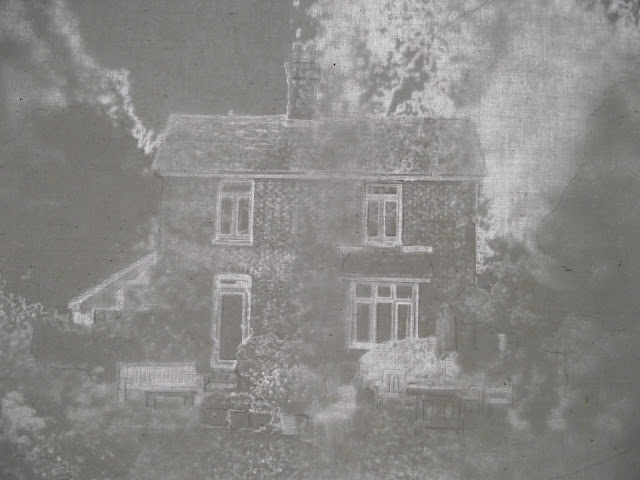 Using the same techniques as the chimney pot embroideries in my final degree show at university, I sneakily took a photo of the house (remember when I collected the apples?), worked a few filters on it to bring out certain light and dark shadows, then used old school methods to copy the image onto the fabric. 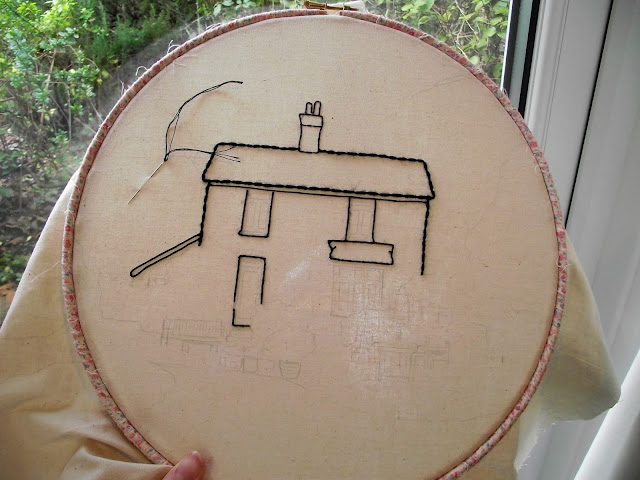 So far in the above image I have used a combination of couching wool and cord, and am beginning to create solid lines using back and whip stitches. 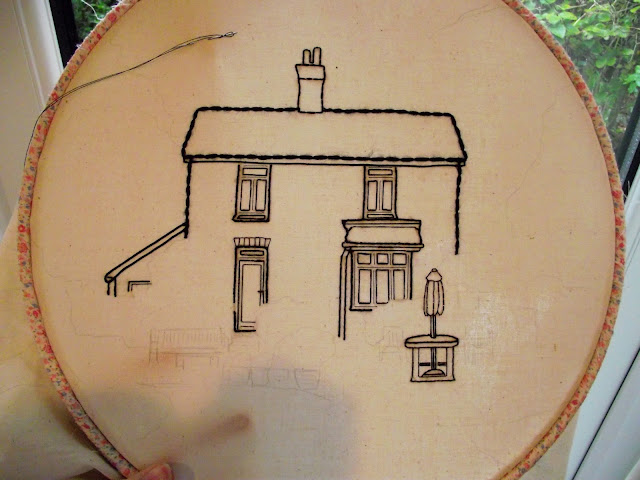 A little further in I have lines of straight stitches in different weights of threads, to create thinner and thicker lines. 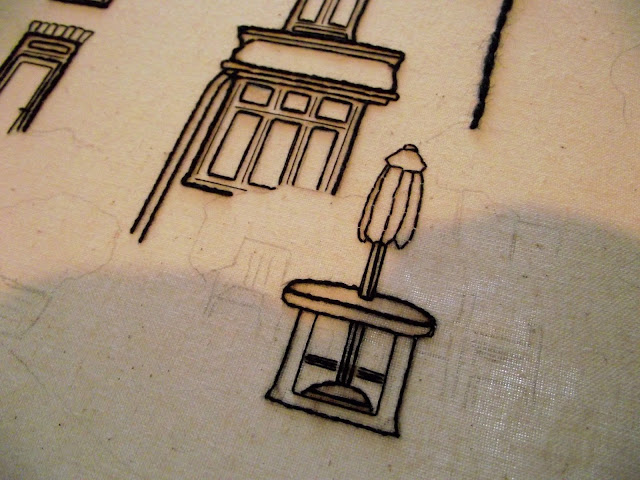 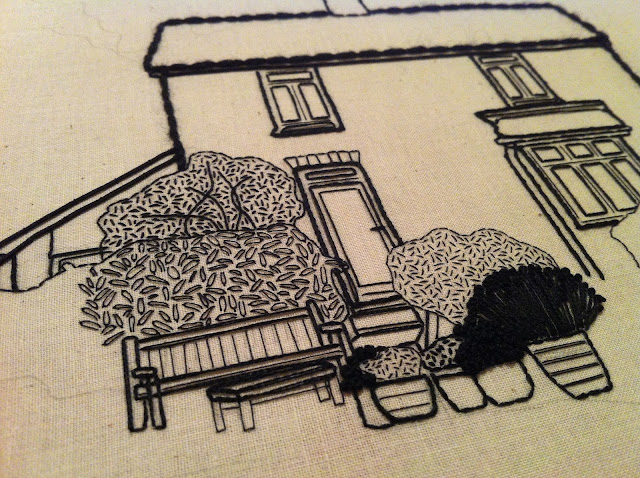 This week the greenery has begun to grow!! I have filled the flower pots with seed stitches, french knots and pistil stitches. The bushes behind have different weights of seed stitches and single chain stitches to mimic leaves. What do you think of my little bench? 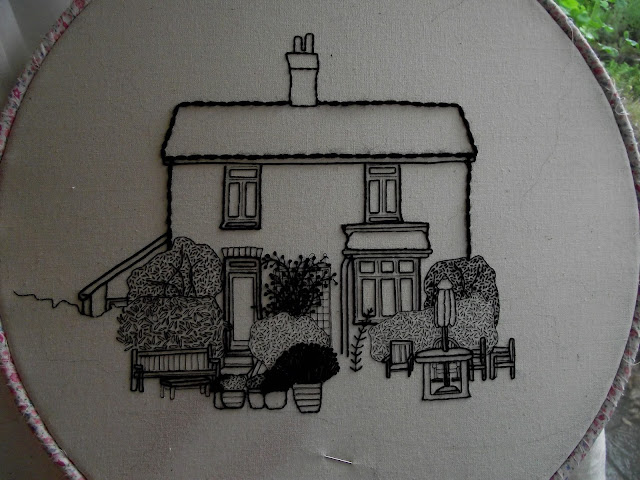 This is what it looked like about 11am this morning. I have added in a trellis with long, thin lines of cross hatched thread. The plant growing up the trellis is a combination of more pistil stitches, back stitches and knots with trailing loops to make it appear messier. 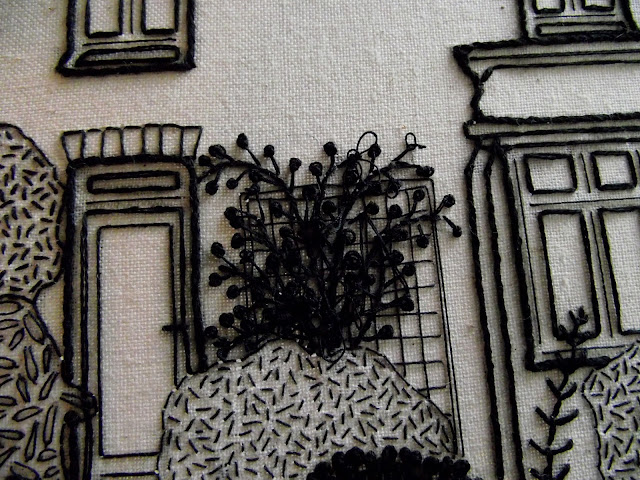 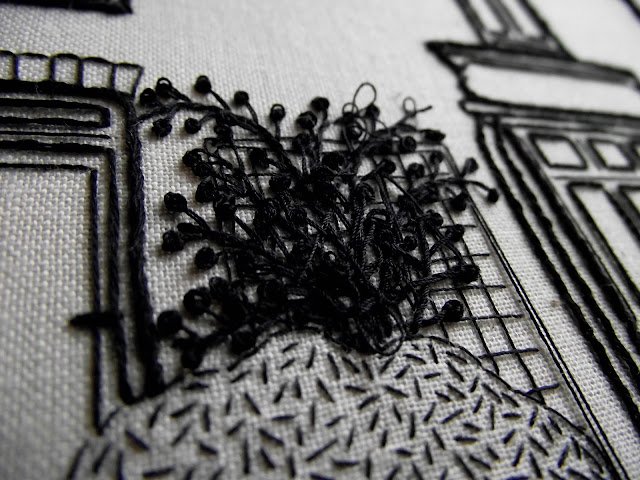 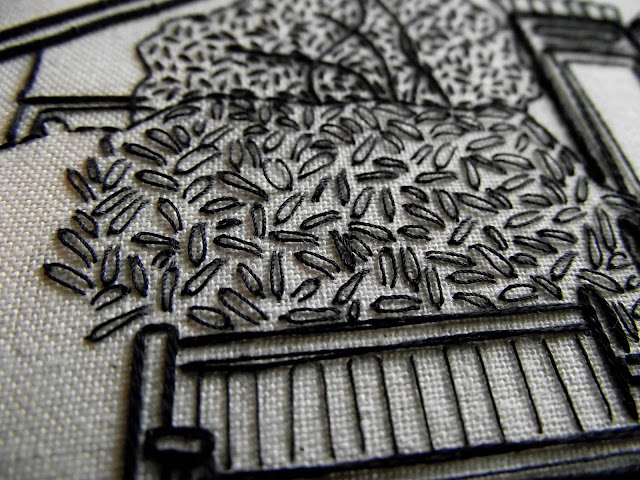 I decided to have a break from stitching just before lunch (it gets hard on the eyes to be staring at such small stitches all the time) and went for a walk with Elvis. It was raining but I enjoyed the sound of the rain pattering on my umbrella, and on the leaves of the trees. 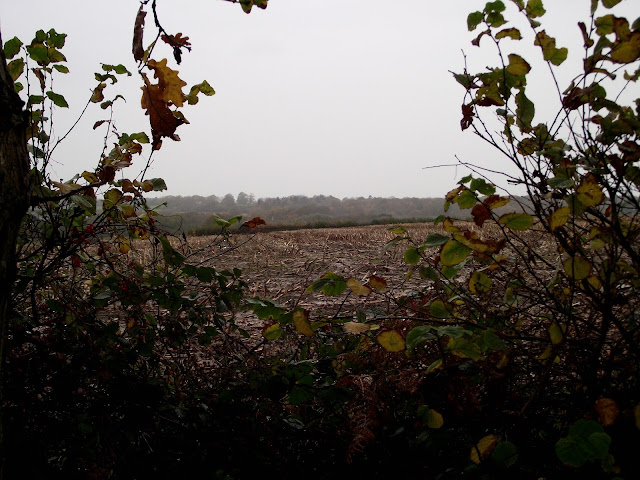 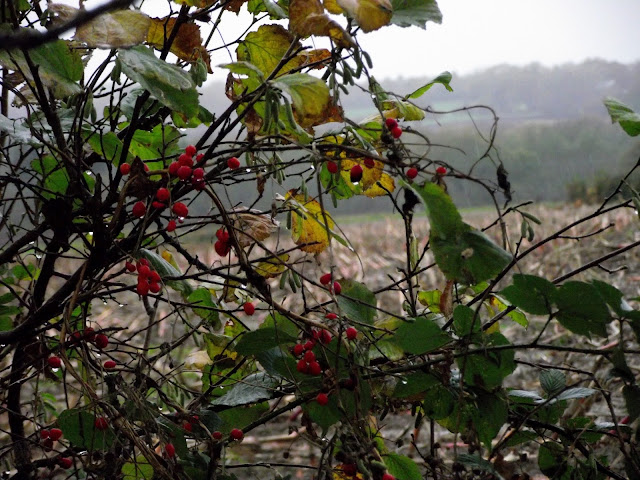 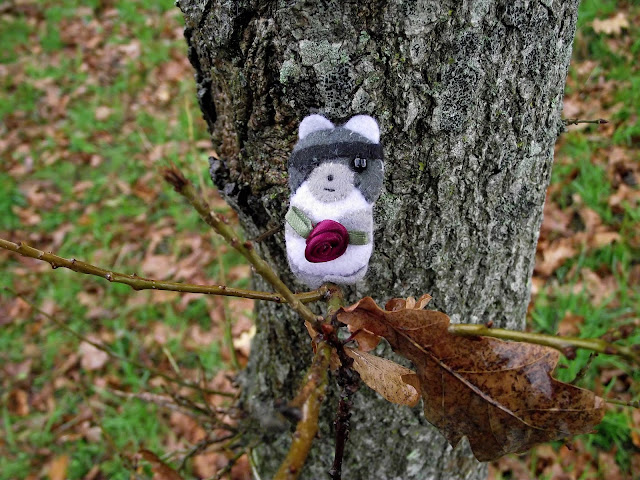 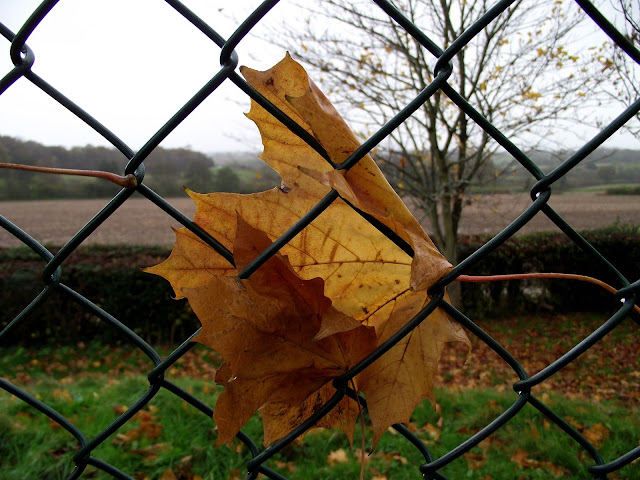 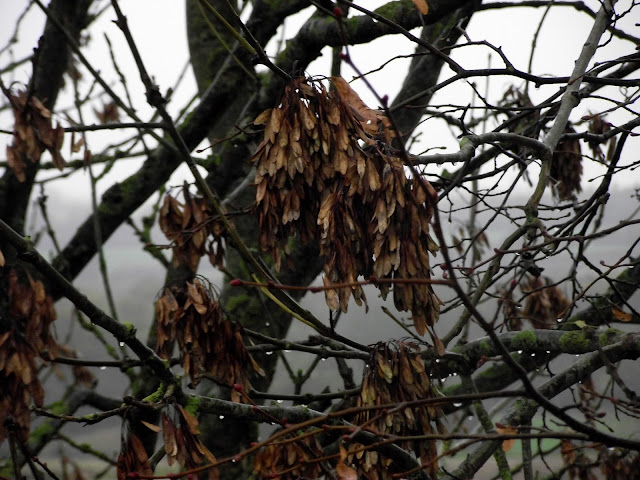 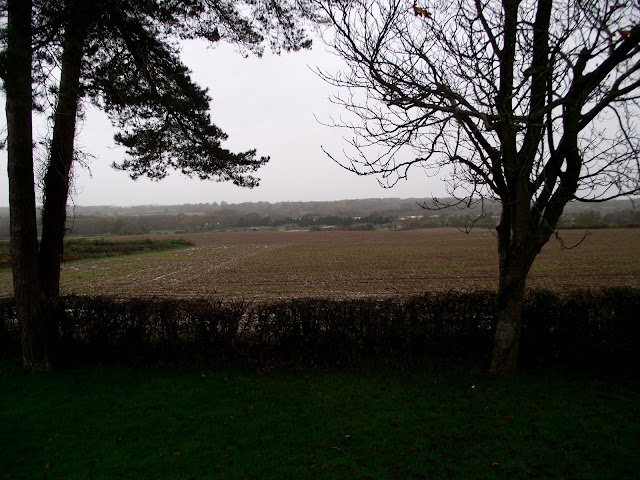 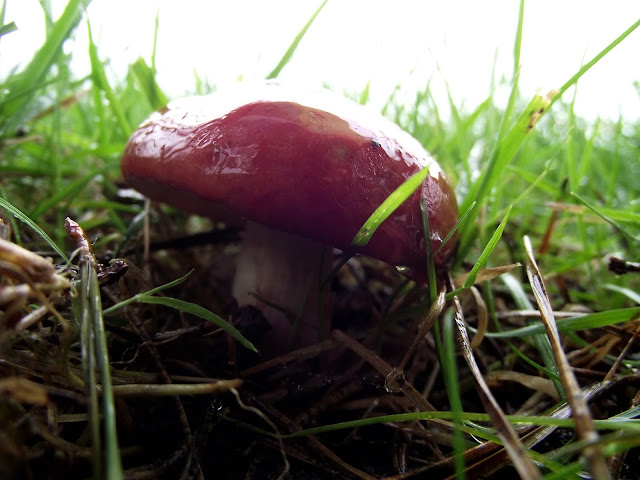 Whilst I was looking for pine cones (for the Christmas wreath I am collecting bits for) I came across this very sweet but deadly looking toadstool. It really was very tiny, smaller than Elvis who loomed over it and he's not the biggest travel hamster in the world. 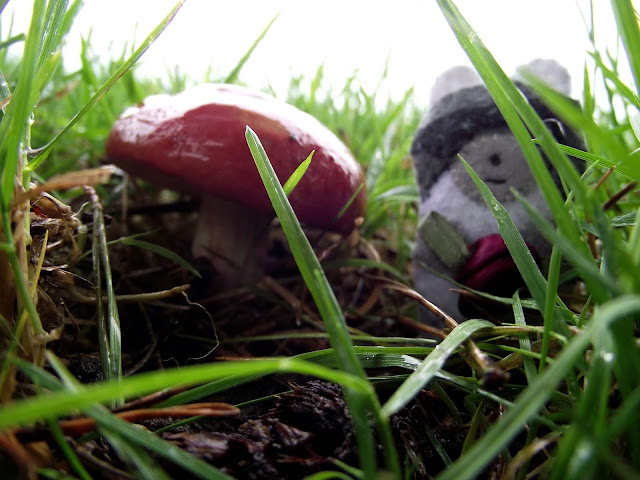 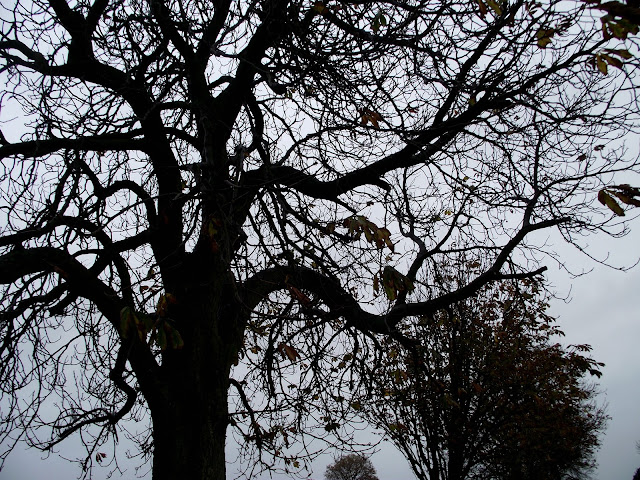 And finally, the below image shows what the house looks like at this very moment, after an afternoon of continued embroidery. I have added in the little archway around the side of the house, and have been using fly stitch to create fern-like bushes. The edge of the patio has appeared as well by using a organza ribbon- to complete the patio all I need is the chimmnea, and some crazy paving!! Then it is on to the huge trees that aren't even in the hoop space, grass, possibly bricks and a lot more bushes.
I'm still hoping to have this finished by Christmas! 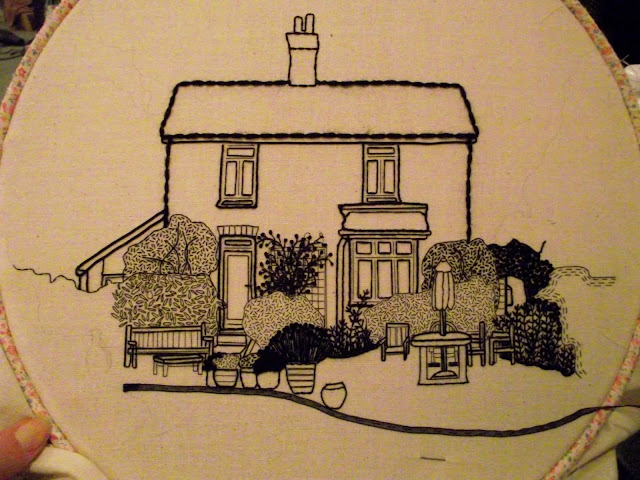