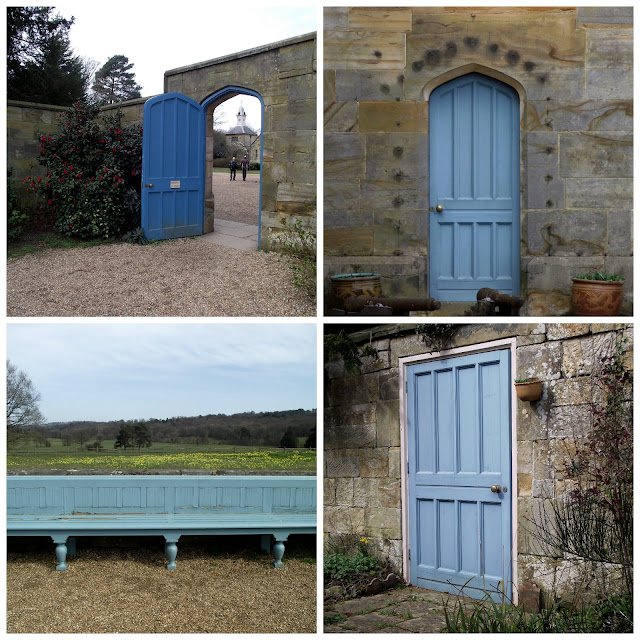 This afternoon The Sister and I went to Scotney Castle, a lovely National Trust property in the garden of England (Kent). It was last lived in by Christopher and Betty Hussey, right up until 2005 when Betty died aged 98, and was then opened for public viewing in 2007. The house is pretty much as Betty left it, with modern decorations (electric ovens and television sets) mixing in with the more traditional items you are used to seeing in a National Trust house- priceless family heirlooms and glaring, haughty nosed ancestral portraits. 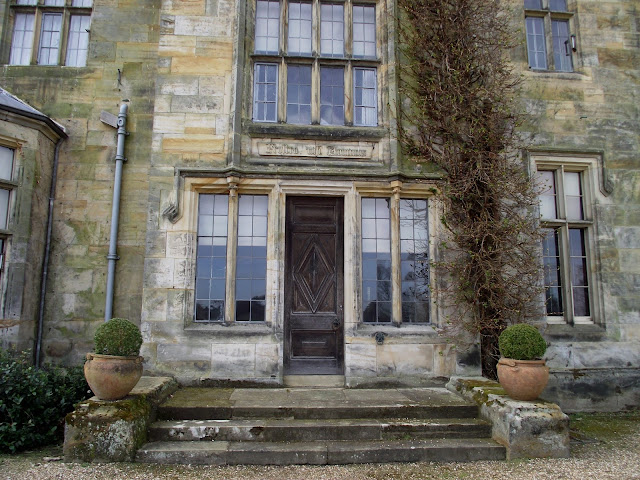 The house and grounds are really beautiful and there are images and sculptures and figurines of cats everywhere as Betty was really quite obsessed with her feline friends. There is even a blue painted ladder (matching the outside doors and benches) standing against the kitchen window so the cats could reach the ledge and be let inside. The Hussey family were also prolific painters by the looks of things and there are hundreds of paintings, etchings and sketches of the castles and gardens, painted by the owners of the house in all seasons- it is rather lovely to have this documentation of the property through the years. Nothing really seems to have changed much. 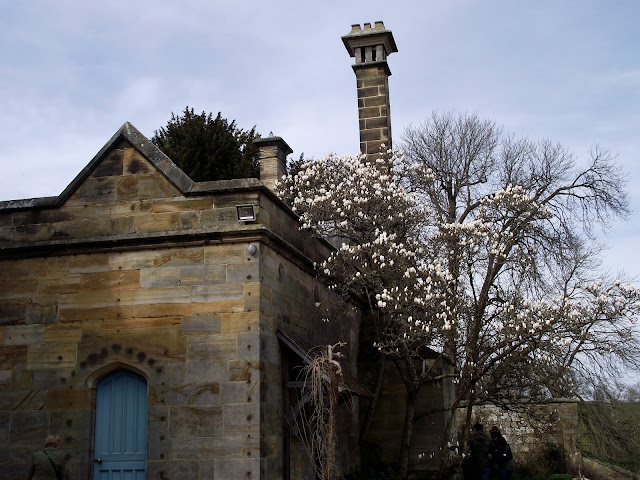 At the top of the hill you have the big house, which was built by Christopher Hussey's grandfather, Edward who was very keen on architecture. This is a more recent addition to the land however, as the original building is right down at the bottom of the hill, surrounded by a moat. This was made a romantic ruin when Edward moved into the new house, and acted as a folly which you can see from the windows at the top of the hill. 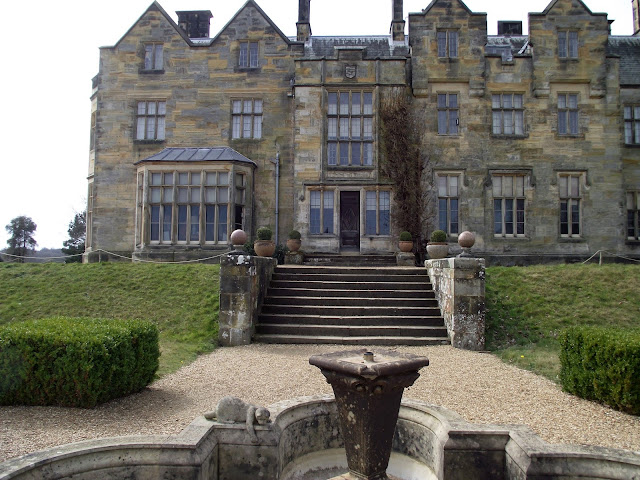 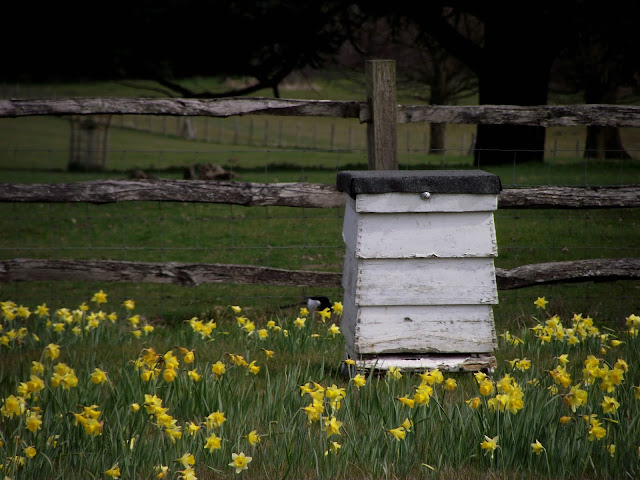 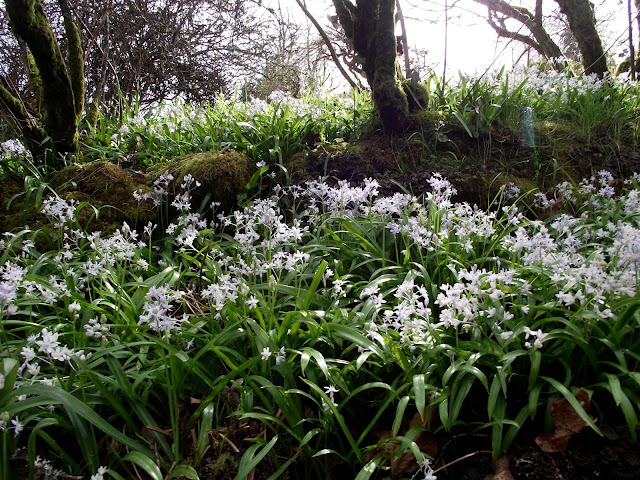 To get to the lower castle, you have to pass through the gardens, one of which used to be a little quarry- they even found a footprint of an Iguanadon! 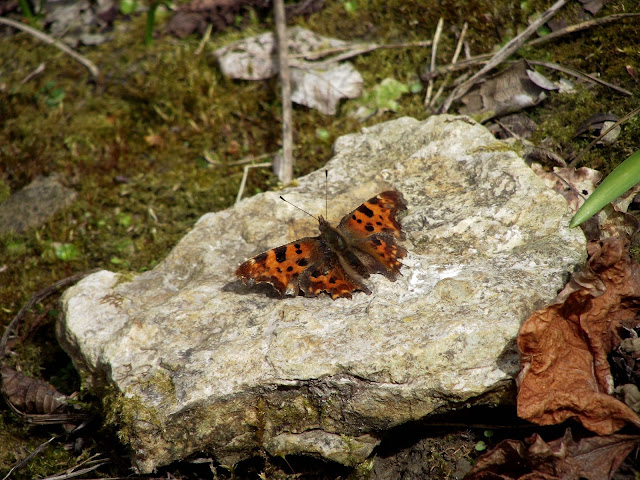 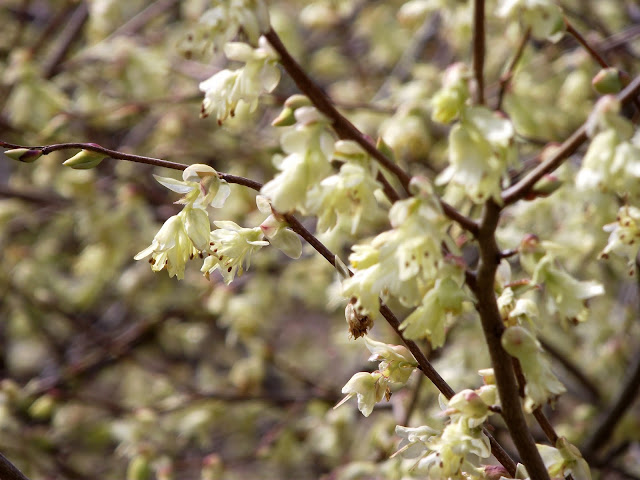 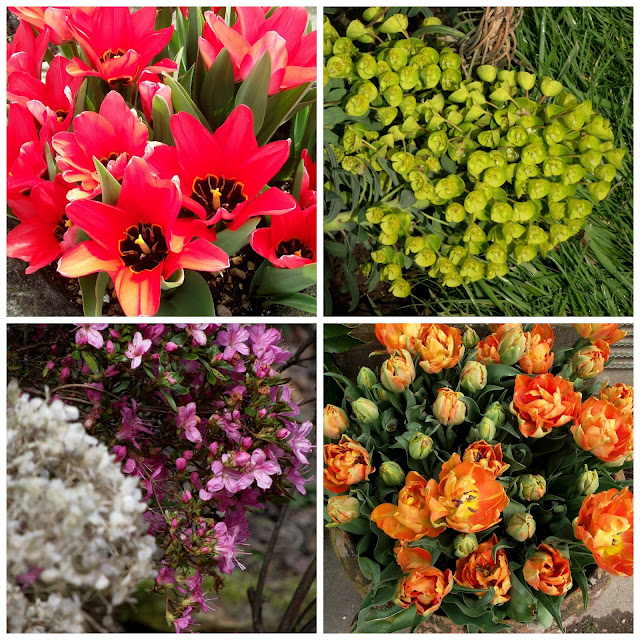 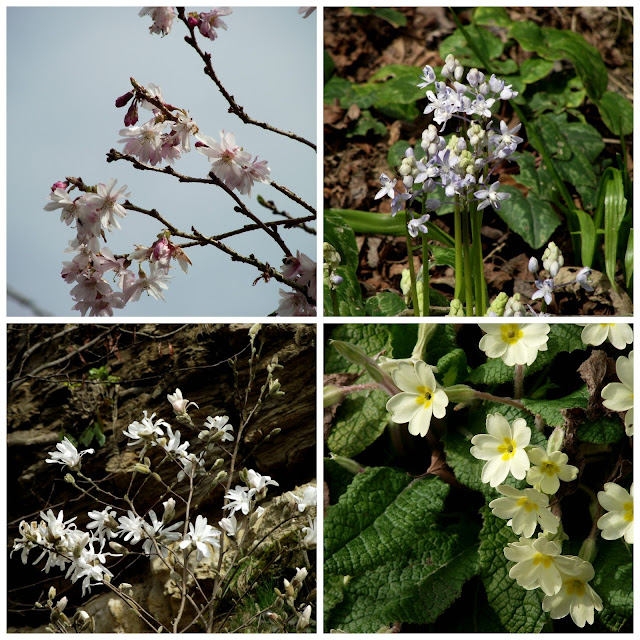 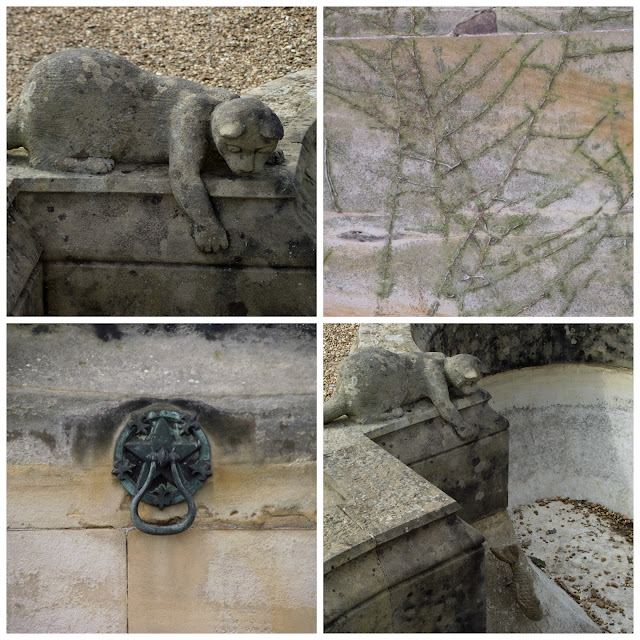 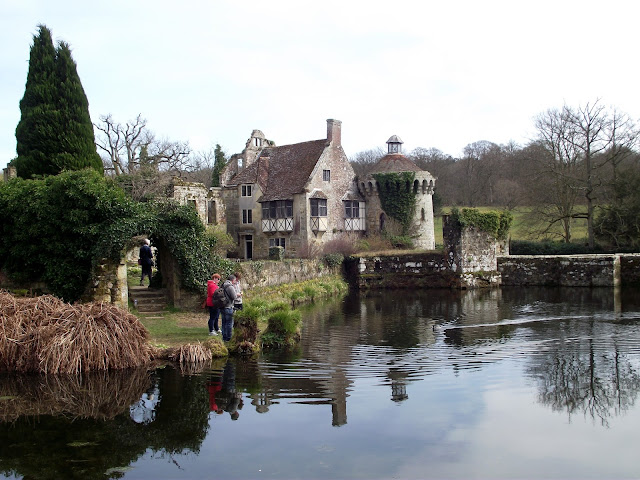 Once you have wandered down and down, through the gardens beginning to blossom with all manner of plant life, you finally reach the bottom where the moat glistens in the sunshine. There are only a couple of rooms left in this medieval castle, and they are in quite good condition- some with wallpaper still on the walls! 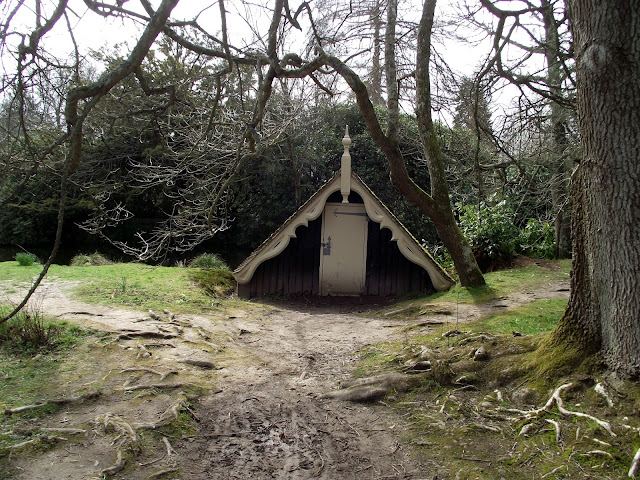 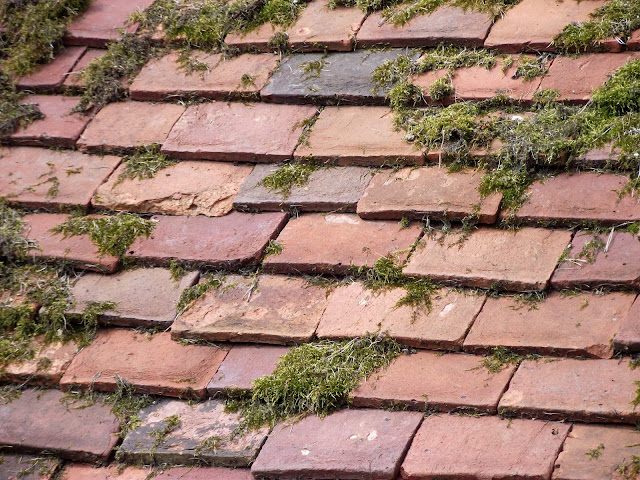 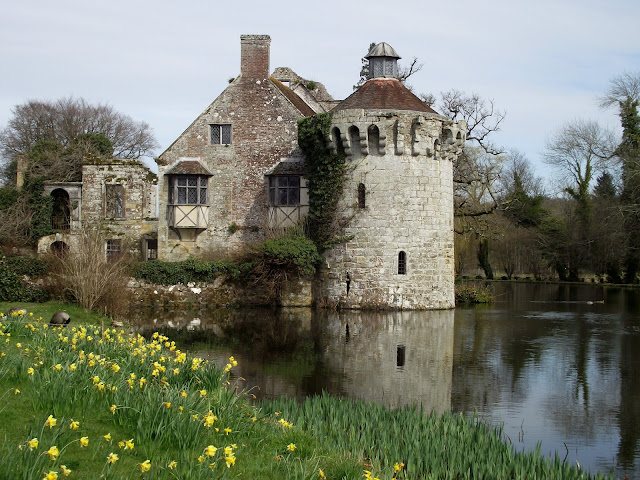 Apparently there used to be four turrets corner-posting the building, as it was originally a fortified castle turned stately manor house. There is only one left now, cutting a striking image against the water. See the beautiful reflection? 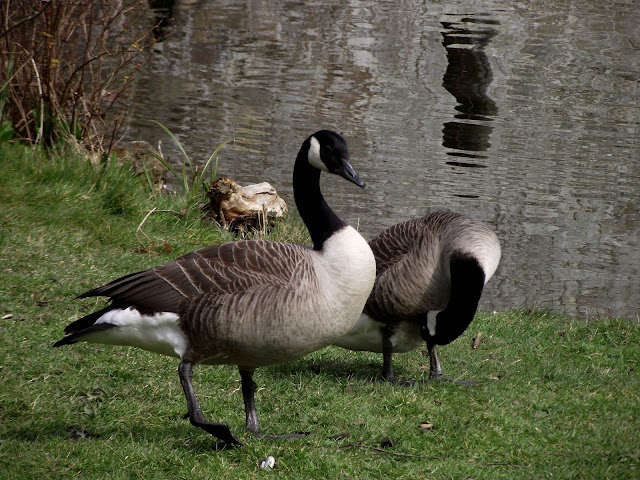 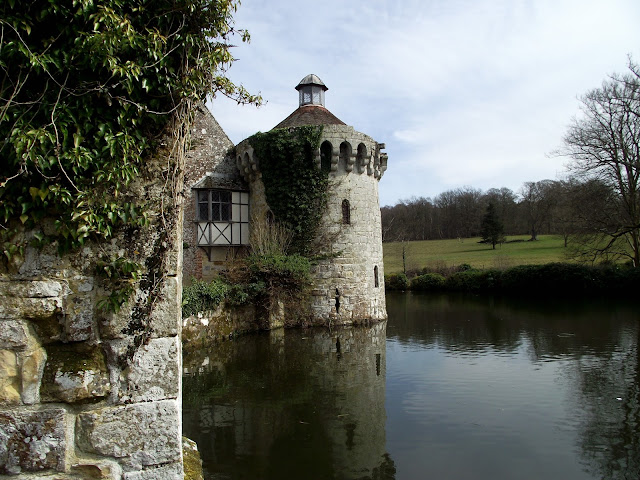 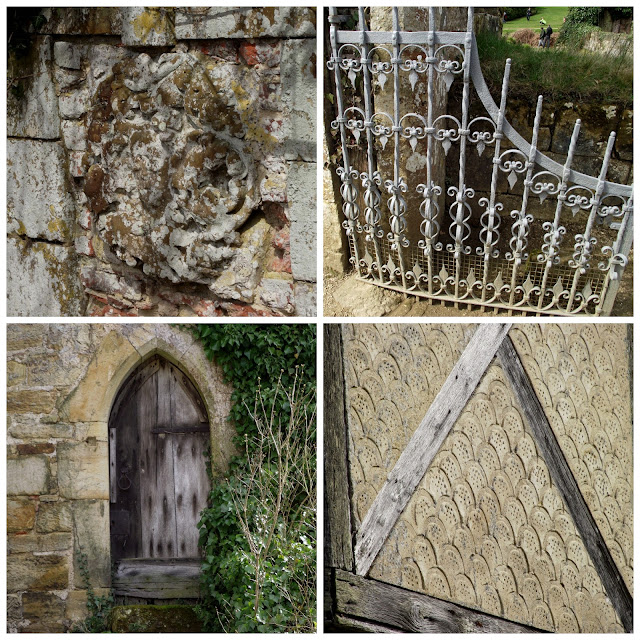 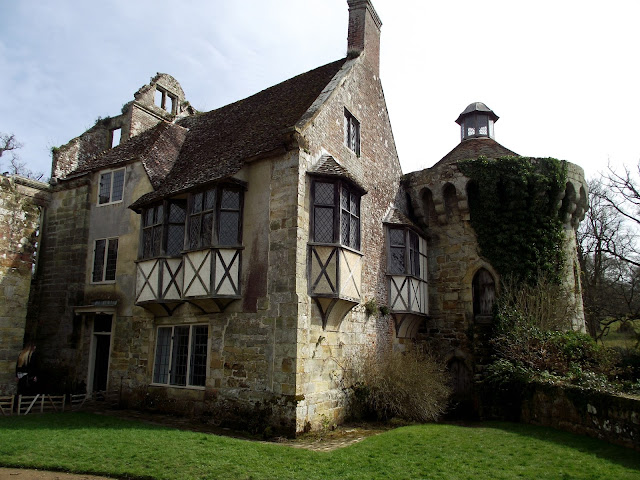 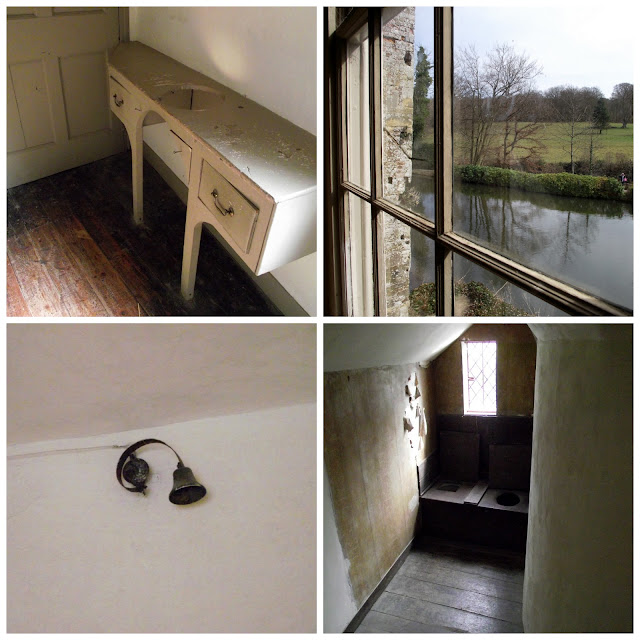 Inside there are quaint little reminders of how the house used to be lived in- the wooden toilets, a built in dressing table and a service bell. I think really, with the view from the windows over the moat, if I had lived at Scotney, I would have spent a lot of time in these little rooms with their glorious views. The big house on the hill is too grand for me. 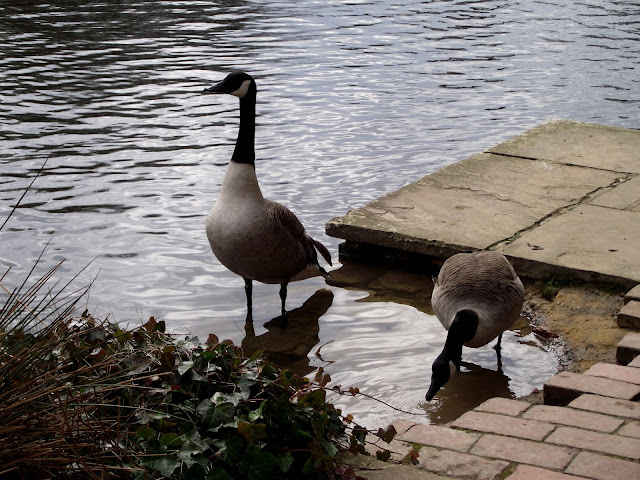 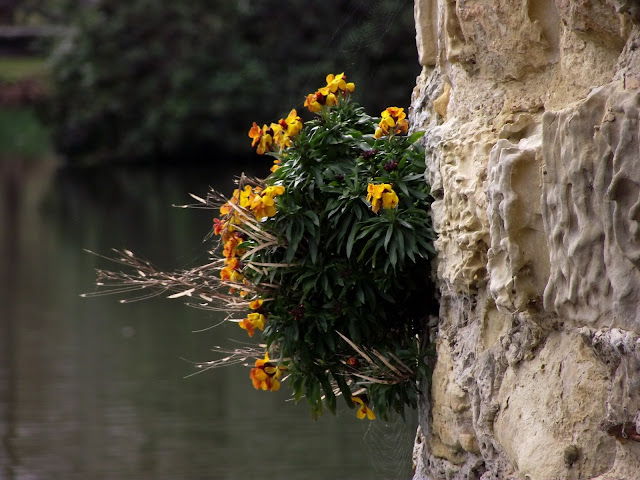 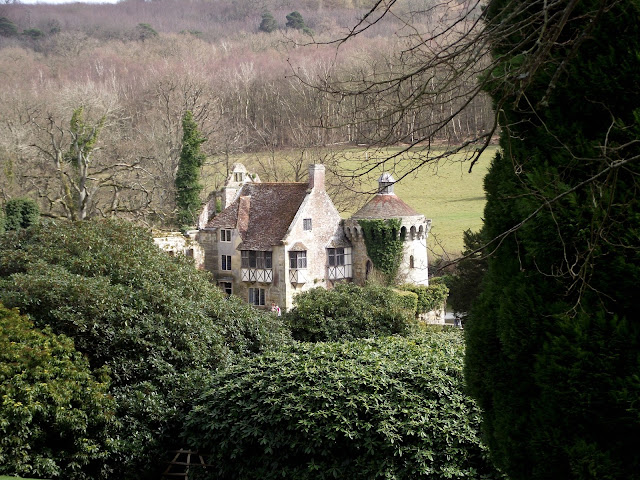 Walking back up the hill towards the grandeur of the new build, you can turn and wave at the old castle nestled in it's watery nest, then march onwards past the ornately carved front door with it's family crest and motto emblazoned in the stones, and straight on into the tea rooms (which probably used to be the stables, they usually are) to round off the visit. 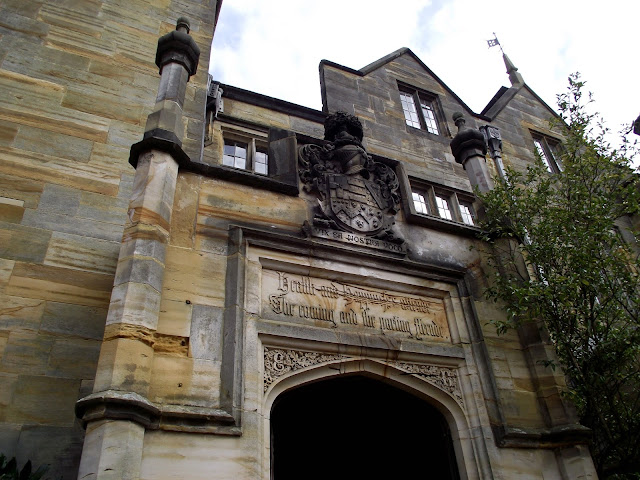 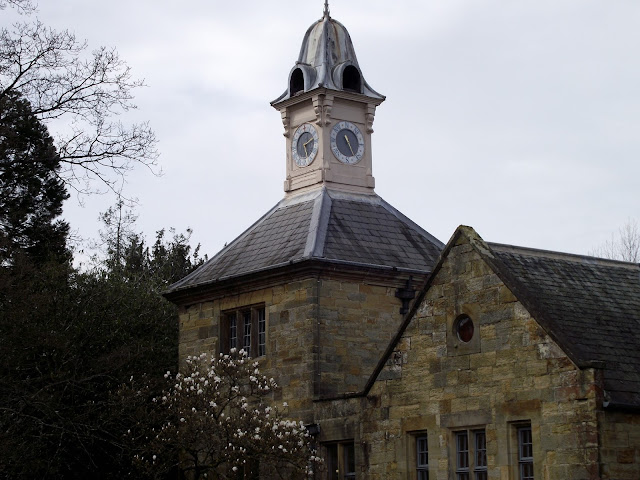 Especially when there is a cream tea calling!!! 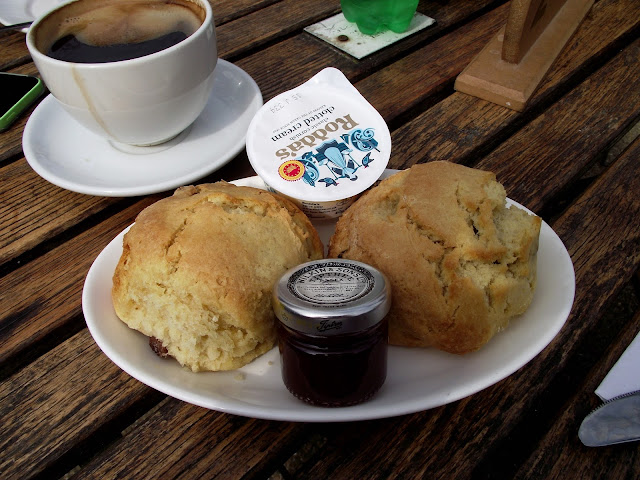