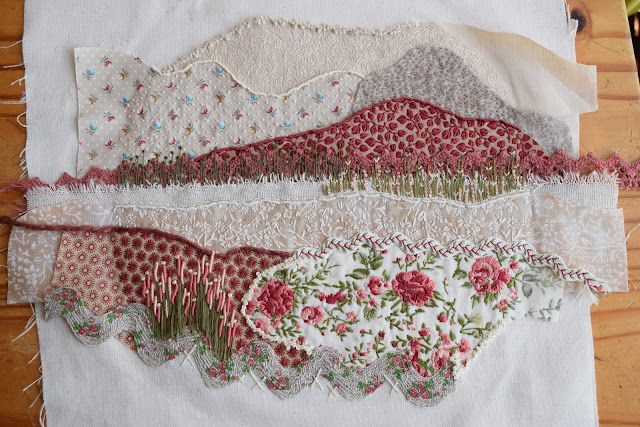 Hello! Let me introduce you to my newest stitchscape; Readers, meet In The Pink, In The Pink, these are my Readers, I hope you will be great friends.
This 'scape was inspired by a fabulous box of goodies from The-Stitchery, a treasure trove of a haberdashery shop in Lewes. They have a postal inspiration box, nicknamed the 's'-box, which is released every month and plops through the letterbox determined to fire up your creative synapses. I was given a sneaky peek of April's box when I visited at the end of February and knew that I had to purchase one when it was released- oh those gorgeous ric-racs! (Be still my beating heart.) I also purchased the complimenting box of fat quarters and have used as many as will fit in this vintage tea and rose coloured embroidery. 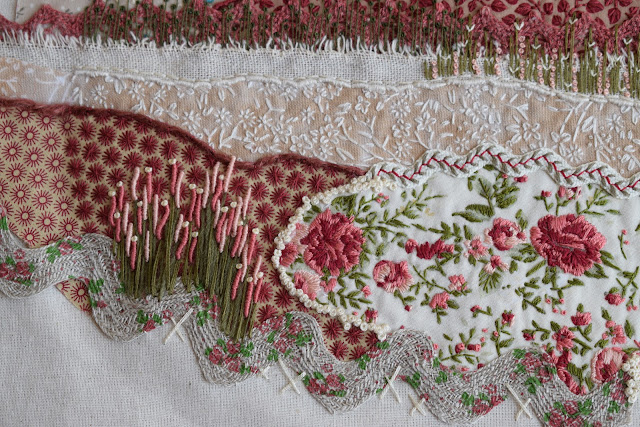 The colours are a little bit different from my usual favourites, but I really enjoyed the challenge of limiting myself to what was in these boxes, and trying to use as many of the fancy yarns, ribbons, laces and other bits that were also in the box. The ric-rics were a must! 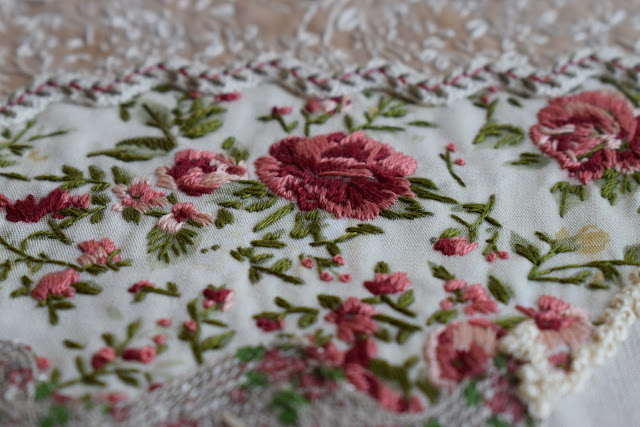 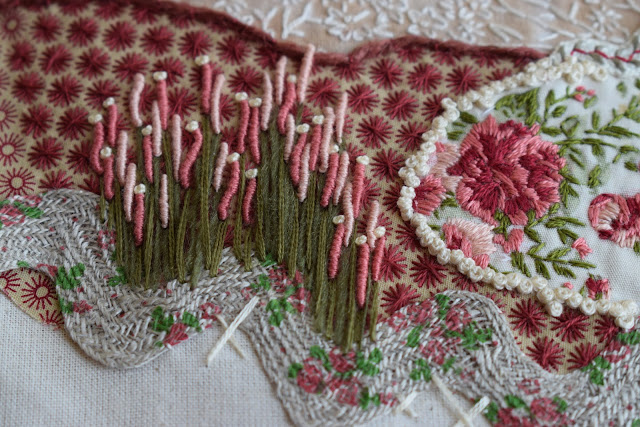 It has taken me quite a while to complete this one, as the fabrics used are quite heavily patterned and therefore full of little stitches. Take the spiky circle fabric above for example, each sun shape has had an overlapping star stitch over the top of every crossed line- it took forever! 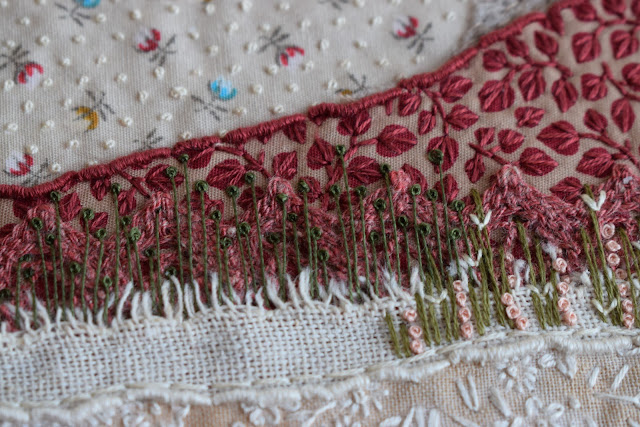 There are tiny one strand, one twist french knots in the pretty flower print fabric used as part of the sky and the leaf fabric has been followed with straight stitches on the stems and making up the veins in the leaves. I actually really like this section because it overlays the felted piece and where I have stitched through both layers, the felt has acted as a padding, giving a slightly quilted effect. The row of red lace has sort of been disguised slightly with single strand pistil stitches, and the rough frayed ribbon has also been bedded in with a straight stitch green grassy section complete with pale yellow fly stitch flowers and french knot peach stems. 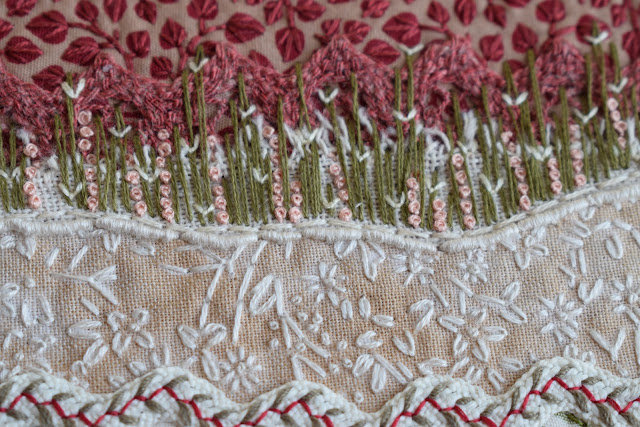 The gorgeous peachy printed fabric has been copied exactly with two strand off-white thread. There is a mixture of stitches here depending on what lines were being covered; fly stitch, straight stitch, detached chain and french knots to name a few. It's a very subtle and understated layer that actually took quite a long time! 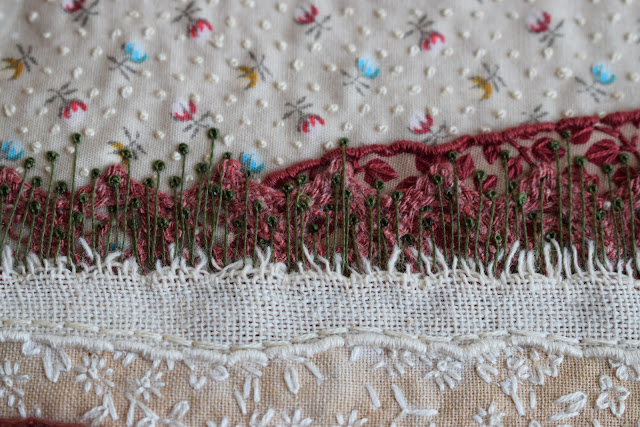 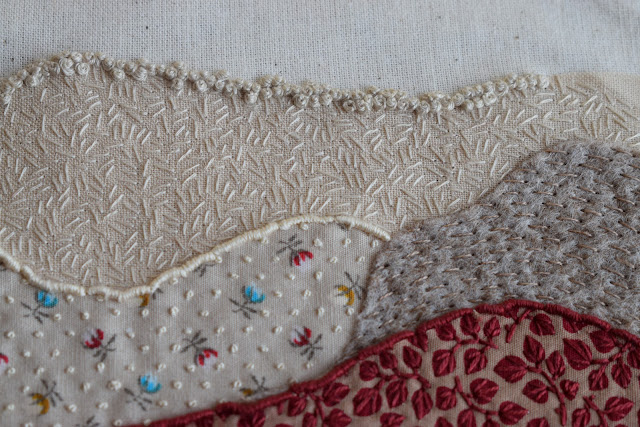 The top two layers have been covered in seed stitch and running stitches to add unobtrusive texture. The focus is with the two darker pink/red layers which help to draw your eye around the piece and look like large outcrops of red rock. And, of course, there are the roses and bullion knot flowers! 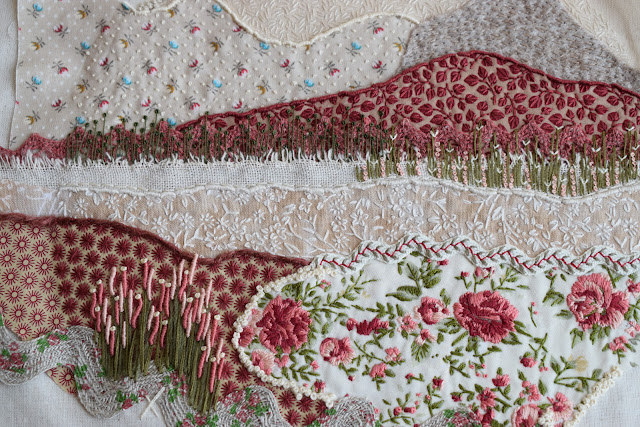 I did have one wobble with this piece, as I originally worked pale yellow french knots around the edge of the rose patterned fabric. It annoyed me almost as soon as I had finished it and eventually I couldn't stand it any longer and chopped them all off, replacing them with french knots in ecru. Much better! It's the price to pay for not planning ahead and going with the flow- and bad lighting helping me make the wrong thread choices.
Now it just needs to be photographed and framed! 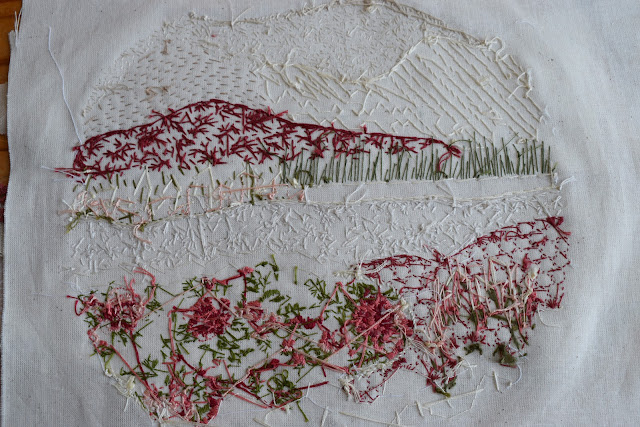