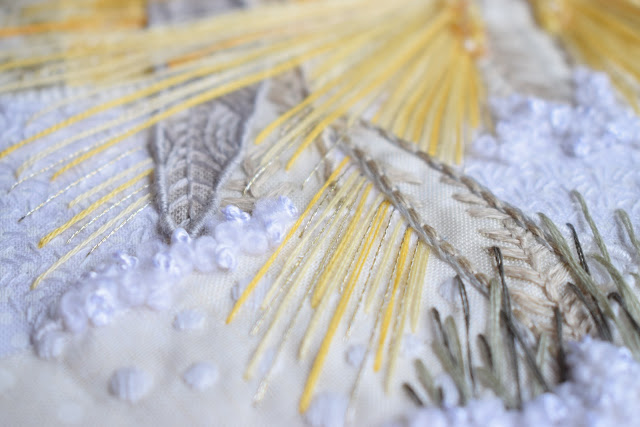 It's funny how ideas appear to people. With my stitchscapes it could be anything; a fabric I see, a view I notice on my travels, a string of words in a conversation, a dream, a brain thought, a holiday snap, an internet image. With my poppy themed stitchscape it was a brain thought that popped up when I was jotting down ideas, and with my winter sun themed stitchscape it was a Pinterest rabbit hole I fell into, looking at different wintry photographs people had posted there. I don't argue with any of the ideas, I just either write/draw them down or lay fabrics out in the hoop, even if I don't then touch it to begin sewing for several months afterwards. I always seem to have a back log of un-stitched stitchscapes waiting for my attention.
Names, I often find, are one of the hardest parts of completing a 'scape. I have toyed with the idea of not naming them anything at all, but then if I turn the design into a card, or list it on Etsy, it is much easier to already have a name . If I am lucky enough- like with my buildings range for which I knew before I'd started that they were Lionel's Lighthouse, Mrs Heggardy's Windmill and Bartholomew's Oast- then I can rest easy once I've finished sewing (or if a name comes to me halfway through) but sometimes I have to research names or ask for help, as in the case of my winter sun themed piece.
Google is a wonderful thing. After a five minute search playing around with dictionaries and thesauruses for words like 'winter', 'sunburst', 'sun', 'winter sun' I eventually hit on this word: Apricity: the warmth of the sun in winter. It's new to me, which is apparently because it is a really old word that may possibly have just been made up by a chap called Henry Cockeram in 1623 when he wrote his dictionary, The English Dictionary; or, An Interpreter of Hard English Words. Either the word has become lost over time or nobody wanted to use it, and according to the Merriam-Webster site on which I found it, can only now be found in the Oxford English Dictionary. Happily for me, and with great thanks to Henry Cockeram, it finally gave me a title for this piece; Apricity Woods! 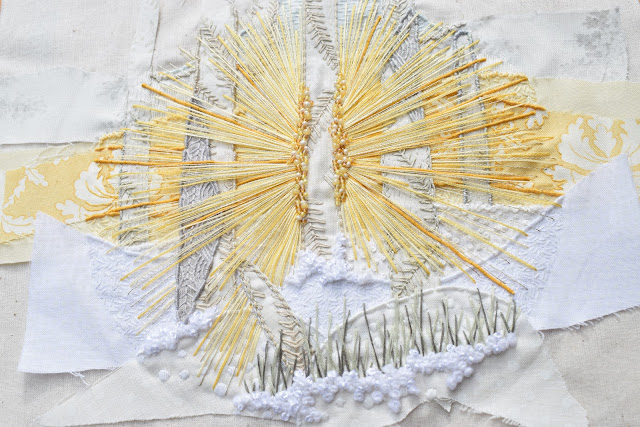 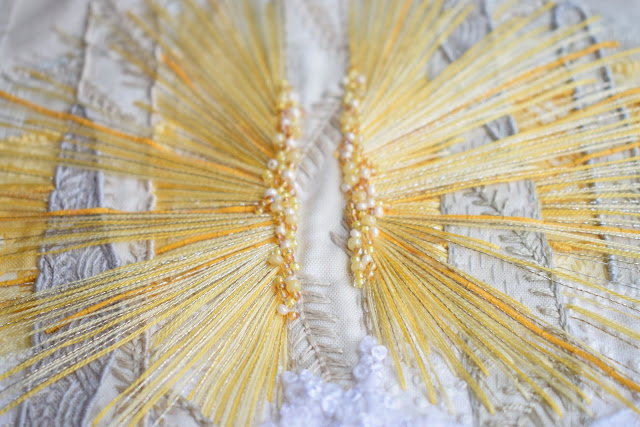 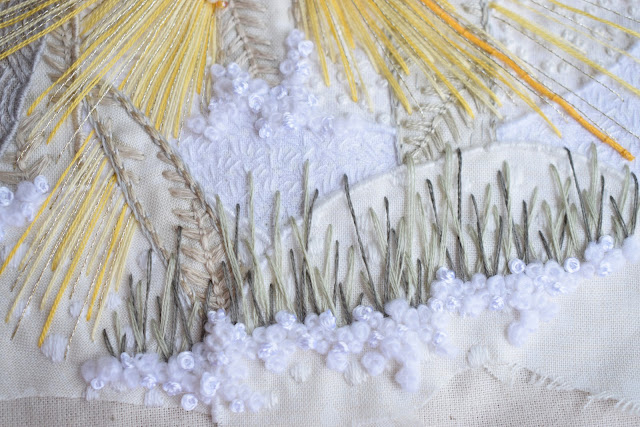 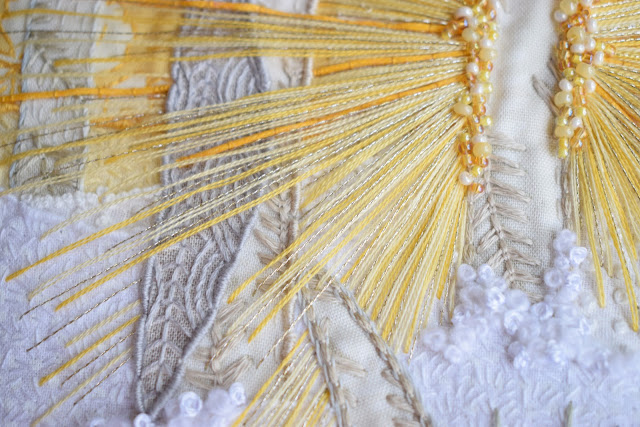 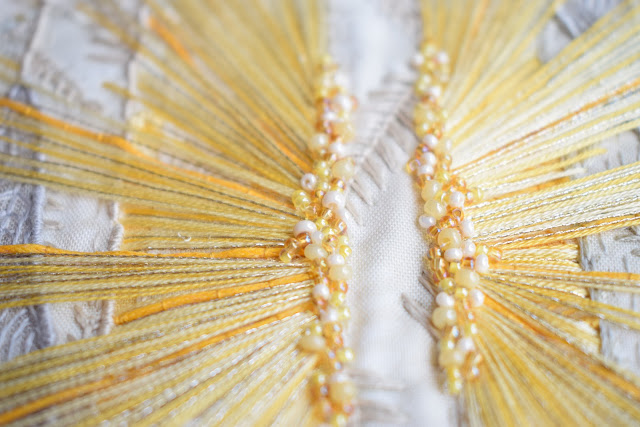 I particularly like how I've managed to make it look like the sunshine is wrapping around the tree trunks by stopping and starting my stitches, it makes it look more three-dimensional somehow. Plus this piece sparkles and shines like mad when the sun catches it!! Something that is often hard to capture on camera- you'll just have to come and see it in person.
There is a lot of stitching that is now hidden by the sun rays. I always work the background layers first as I'm never quite sure where the rays are going to be positioned or what will be visible at the end. It probably wouldn't matter if I didn't sew the back but it wouldn't seem quite complete to me and for some reason I like to make more work for myself. In these layers I have seed stitch, running (kantha stitch), rows of closely worked straight stitch- not close enough to be satin stitch, but to make a single strand stripe which looks pretty cool (you can just about see it at the edges), and back stitch following a fleur-de-lis type print in the central yellow fabric band. 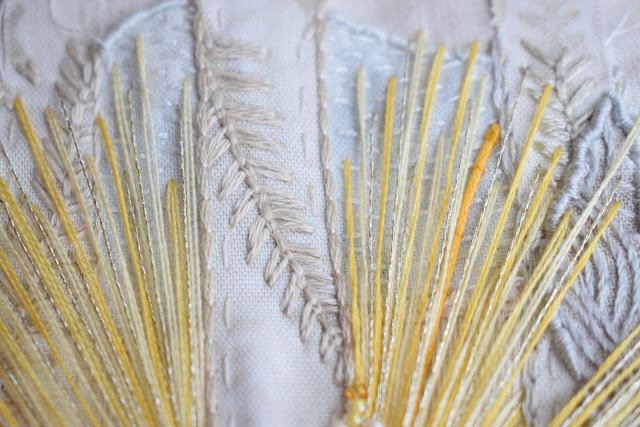 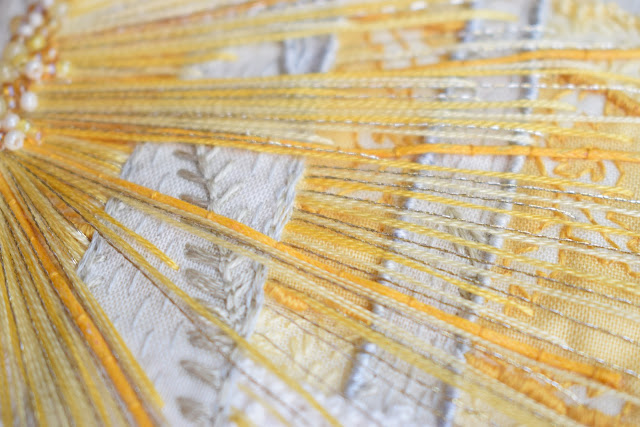 The tree pattern has, unusually for me, been worked pretty identically in all trees (apart from the edges). I will usually mix up the tree fabrics or try different techniques in each one but I really wanted the emphasis in this piece to be the light coming through the wood so the trees had to be relatively simple. I followed the fern-esque print with multiple fly stitches, some layered on top of each other where the pattern lines were heavier. The threads used were slightly different colours on different trees (mainly because I ran out of the first colour I started), and I filled some of the trunks with single strand running stitch, others were just outlined with running stitch. To edge the trees, I have couched a full complement of six strand embroidery stitch (middle tree), worked chunky pekinese stitch (second in from right), and bullion knots (far right). More bullions on the second in from the left, and whip stitch on the far left. In two trees I have also added an insert of another fabric to add a little bit more interest- it can't all be boring!- which is worked with more fly stitch and single strand whip stitch over the corded lines of the pattern. Excitingly, I tried something new in this piece, and the little tree stump sticking up at the bottom (below image) has pekinese stitch worked over a couched thread! Usually pekinese stitch is worked over back stitch, oh the thrill! (Just smile and go with it....)
The snow clumps have been worked in Stylecraft Acrylic DK yarn and DMC Silky embroidery floss- matte and shiny swirled together in a french knot frenzy! 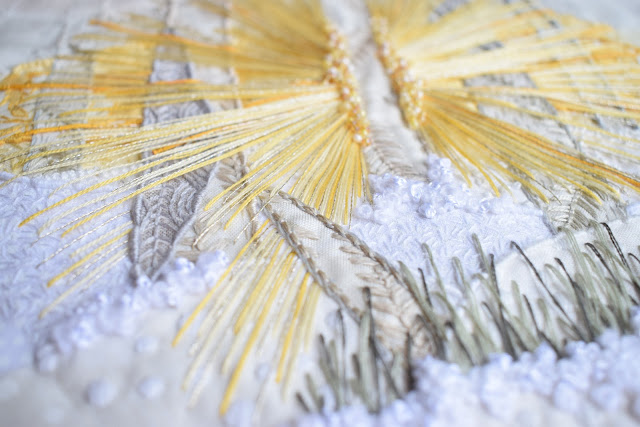 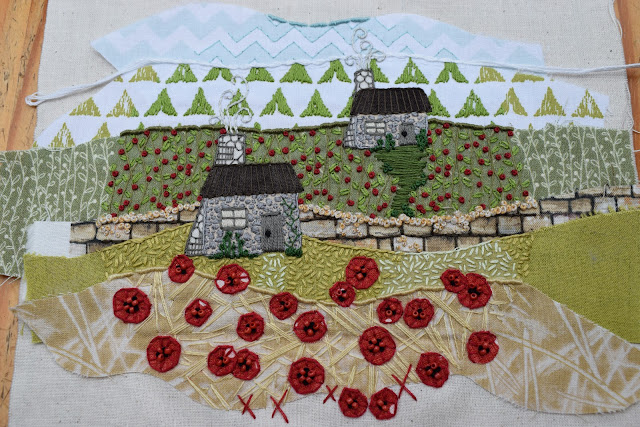 Poppy Lane is a completely different kettle of fish and you can still see every tiny stitched worked in this piece- of which there are hundreds if not thousands! And before we go further I must apologise for the lighting in these photos, I was having a funny five minutes with the camera and they all came out either slightly too dark or over bright. Anyway, this is a little piece worked in a 15cm hoop, but with a lot crammed in there! 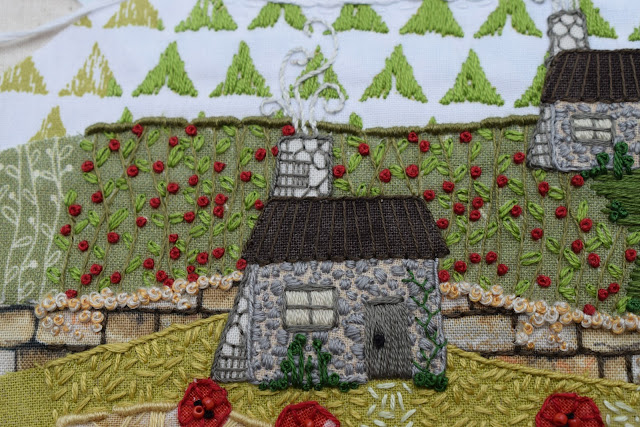 The houses themselves are very sweet with their stone work chimneys. As with the little house in The Snow Cabin 'scape, these were bondawebbed on to keep them nice and neat. I have worked straight stitch and fly stitch following the lines of the pattern in the chimney, and a really rough satin stitch over the main fabric of the house, again following the pattern that was there. The door and window have been satin stitched, the edges whip stitched and the roof created with rows of single strand straight stitch. Shrubbery in the garden has been added with pistil stitches, feather stitch and french knots. 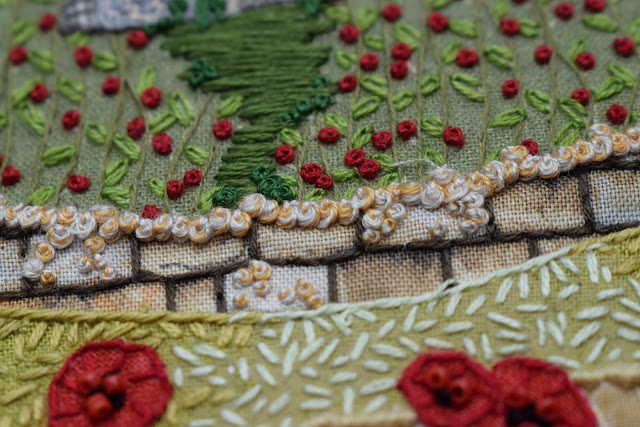 I love the leafy print fabric above and have used it several times now, trying it with different colours and variegated threads. In this instance the stems and leaves were worked in two different greens and red french knots added where there are bobbles in the pattern. The wall underneath has just had a very simple treatment of back stitch outlining the stones in the wall, and the french knots at the top have been made with a three strand thread comprised of a single strand of three different colours to create my own variegated thread colour.
Seed stitch has been made more interesting by using two different thread colours, and also different weights of line- the darker, more citrus colour is three strands and the paler, mint colour is only two. 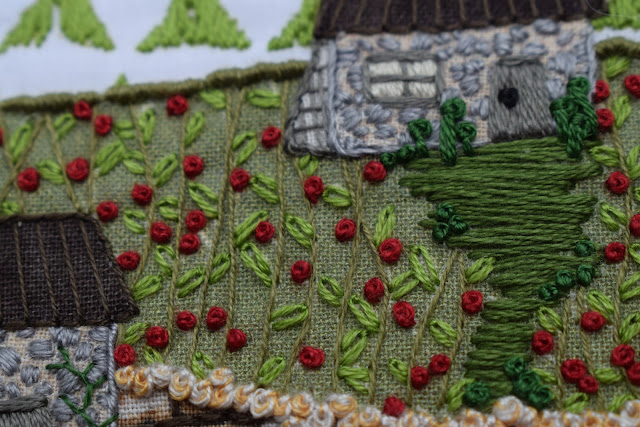 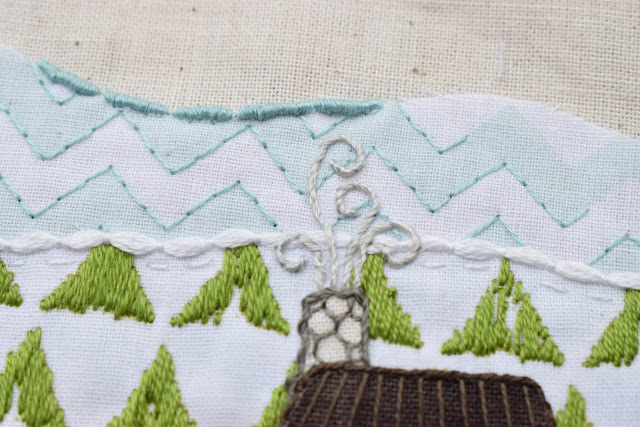 I had a slightly frivolous moment with smoke coming out of the chimneys. Originally I wasn't going to have anything drifting out of the chimneys as it wasn't a cold image, unlike The Snow Cabin which is all snowy and has a gauzy fabric for the smoke billowing from the chimney. I didn't want to add any more fabrics to this piece and ended up with whip stitch cartoon-esque swirls which I quite like really. 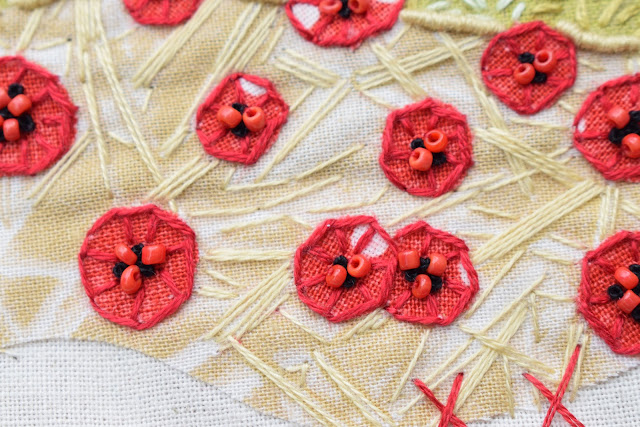 The big poppies at the front are circles of fabric bondawebbed on then blanket stitched down with beads and little french knots at the centre. The straw fabric behind just has little rows of single strand straight stitch vaguely following the pattern lines. I could have done more to this layer, adding little french knot or bullion knot poppy buds, or perhaps adding in green leaves, but I felt that the top half was so heavy with the tiny detailed houses, that it was nice to have a bit of a breather in the foreground. 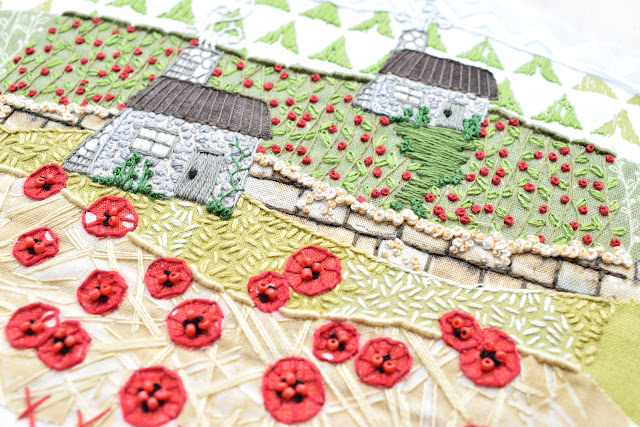 I find it very comforting that I still have so many ideas buzzing around in my head. My Aunt came over yesterday with some more ideas that she insisted I must do (based on Sarah Raven's garden and farmyards). I am more than happy to take on board ideas for stitchscapes but they are having to join a very long queue!!! 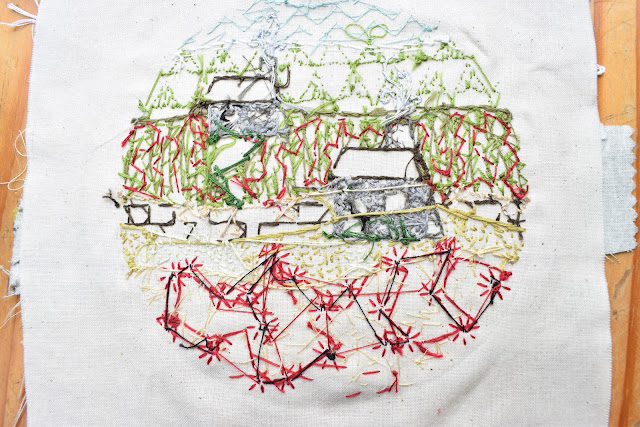