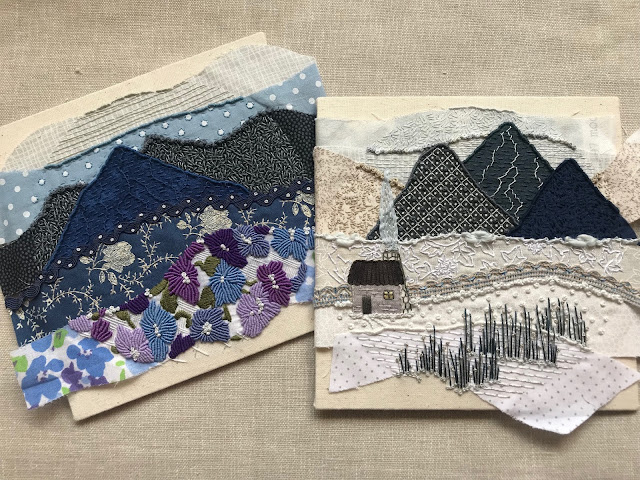 I've had the horrible experience of a trapped nerve in my neck this week. It happened whilst I was getting dressed on Tuesday morning and I was almost instantly frozen, unable to turn my head or lean forwards without splitting pain in my head and shoulder. I don't recall twisting myself into a strange position so have no idea what has caused it. The pain is lessening slightly now although there is still always a dull pain in my neck and if I jolt or twist slightly too fast, it shoots down into my shoulder. I had to put my studio plans for Tuesday on hold as I could barely move, and was forced to sit down with a Stitchscape in front of back-to-back old episodes of Call The Midwife. Of course, once I was in my usual armchair, it was a struggle to get out of it without leaning forwards! 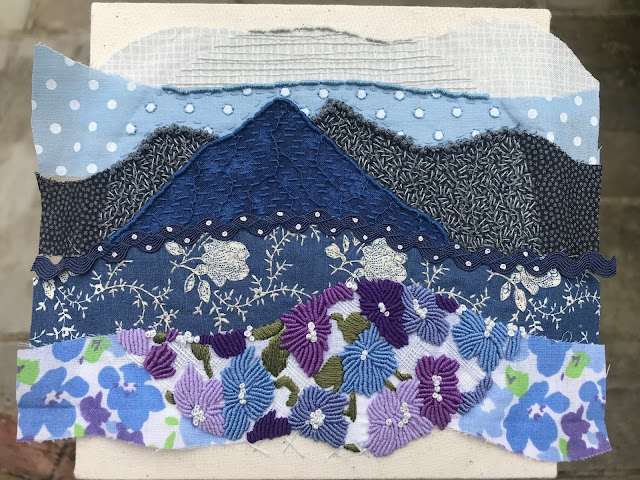 On Wednesday I had recovered enough to walk very carefully to the studio and spent a few hours sitting in a very straight backed position mounting these two little 15cm Stitchscapes. This lovely purple one, Periwinkle Peak, was completed last week on the narrow boat, with the bullion knot flowers taking forEVER! Two flowers in and I was regretting my stitch choice and seriously considering laying the whole thing to one side. I was feeling dis-enamored and the colours in the pattern on the fabric, especially the green colour, were too bold for the rest of the piece and it didn't feel right. After pausing in my bullion knots to cover the green (of which you can see the original colour in the above photo) with a darker, more muted green, it was looking much more cohesive and I plodded on with the bullions, adding more purples than seen in the print to make it more interesting. 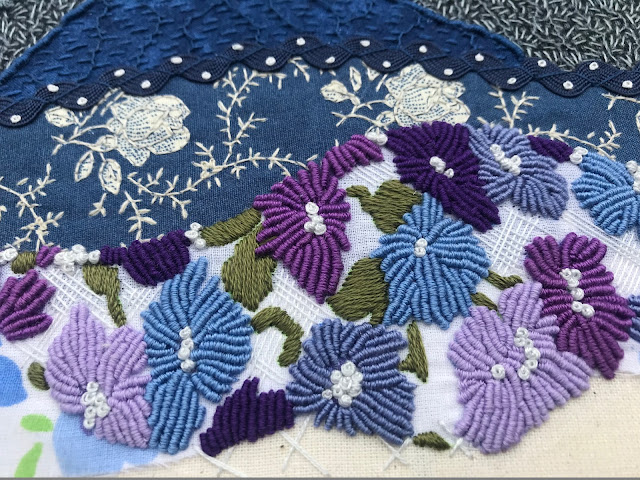 I am pleased that I persevered with it as I really like the different lengths and directions of knots all bundled in together, and they have a fantastic texture! One of my friends on the boat couldn't stop stroking them as they feel so interesting to touch. The middle  of the knots have been filled with silver french knots, and I have also added some single strand straight cross hatching stitches to the background to help disguise the line where you can see the cut edge of the fabric layer below. You don't always see the line where the fabrics have been overlapped but the purple floral fabric is quite thin and pale in contrast to the thicker, dark fabric below. The stitched lines just help to hide this edge and blend everything together. 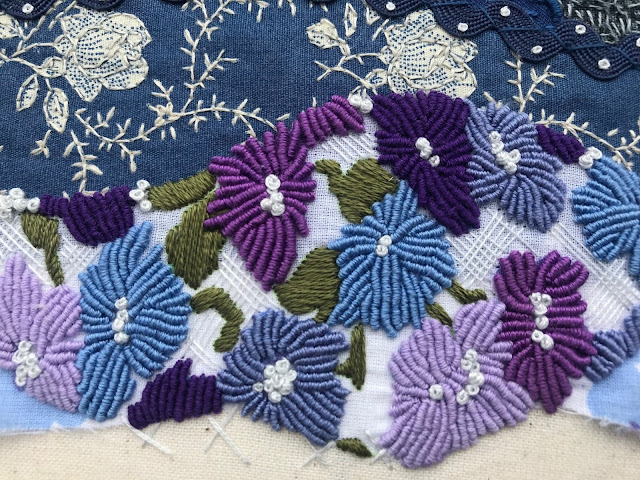 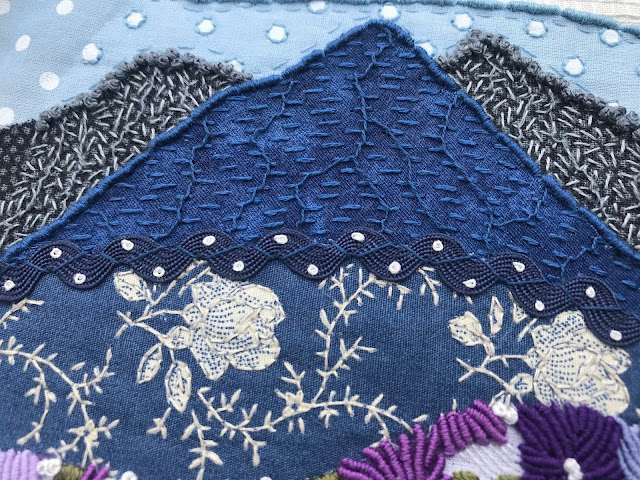 Both of the mountains have my perpendicular whip stitch, although it is more obvious on the blue mountain where I have gone against the rows of running stitches. You can just about see the slightly darker grey lines in the seed stitch mountains to the side but it is more of a subtle texture than anything.
What I like about this piece is that it really looks like one of those camera filters where you have zoomed in on a particular area. Do you know what I mean? You can get filters which I think are based on how the early cameras took photos, where there is a circular centre that is clear and in focus, and outside that circle are just fuzzy, unfocused colour distinctions. Where I have worked stitches, especially in the grey seed stitch mountain and the bottom floral layer, it has totally changed the colour and appearance of these fabrics, and given the whole Stitchscape a permanent circular appearance which I really like. 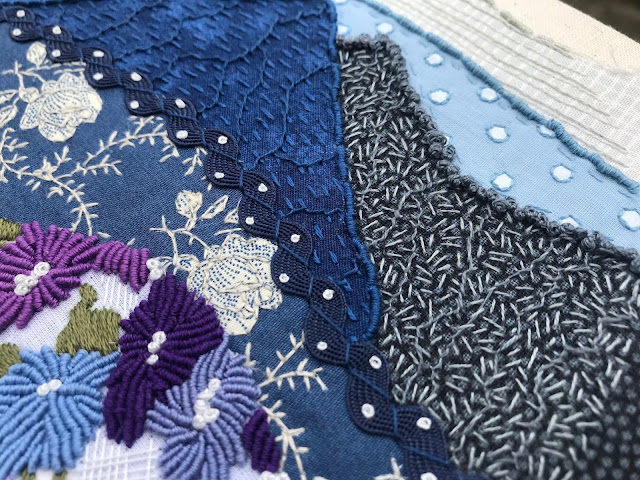 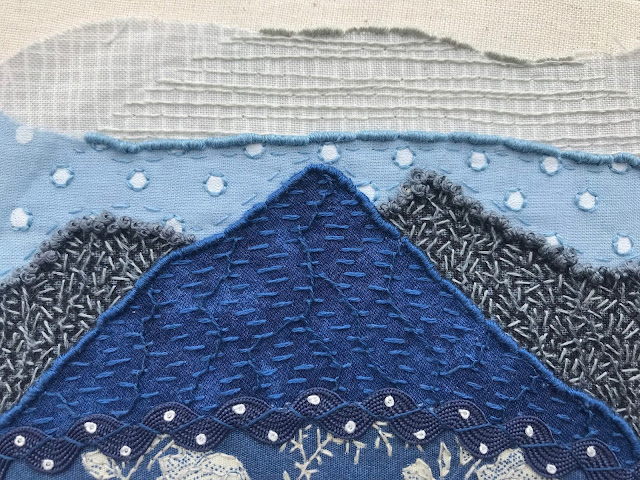 My blue ric-rac has been very simply treated with single strand stitches working diagonally between the 'humps' of the ric-rac. It was bought very cheaply from a local bargain shop and as such, the humps aren't evenly spaced so some of my stitches are longer in one direction. I don't think you notice in the overall piece though. The grey that I have used for the flower centre french knots has been repeated here with single strand, two twist french knots in each curve, which also fits in rather well with the back stitch circles around the polka dots in the sky. It's nice how all of these things fit together and blend the piece into a whole. 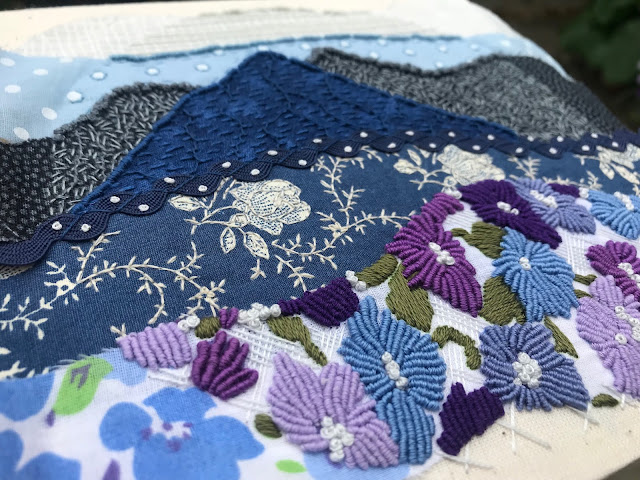 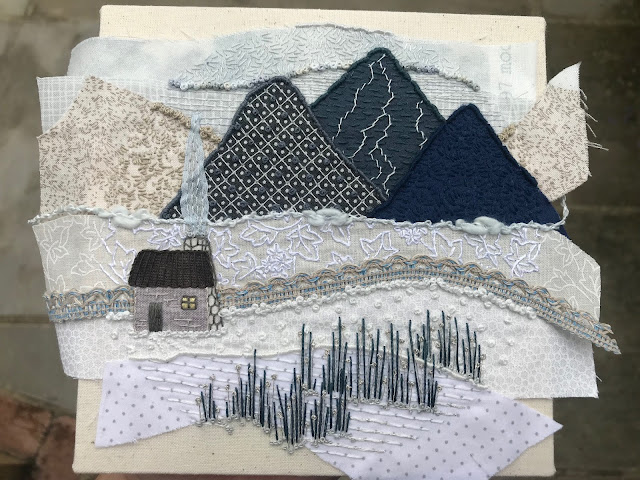 Keeping with the mountainous theme, this little stitchscape, The Snow Cabin, was completed just before my holiday and I am totally in love with it! There isn't masses going on, but I think the composition works here as well as the colouring between light and dark. Sometimes it is the simple ones that are the most eye catching. 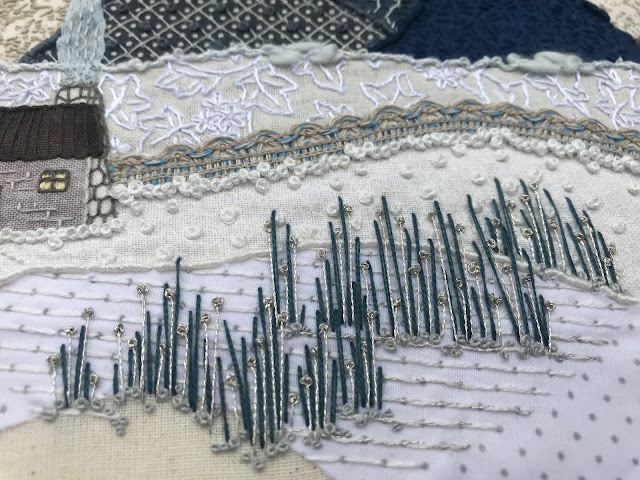 But to say that it was simple doesn't mean that I haven't stitched over every single layer as per usual. My snow layer at the bottom has some lovely straight stitch reeds mingled with metallic pistil stitch flower buds, grounded with tiny grey french knots. The metallic theme is also spread out slightly into single strand whip stitch over brickwork back stitch worked over the polka dot base, almost like the metallic pistils are casting their own metallic shadows in the snow. 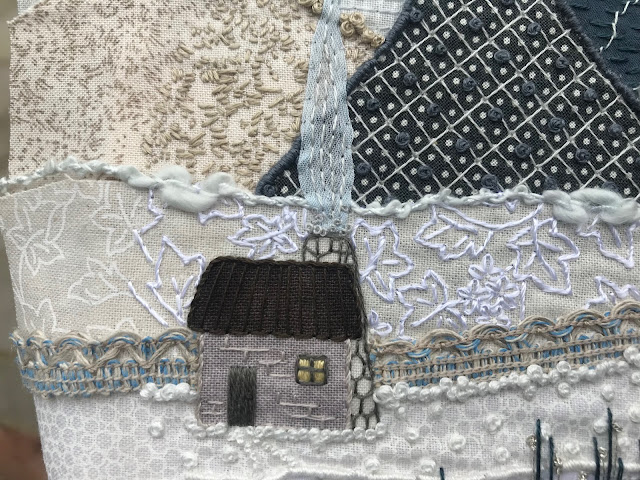 My sweet little snow cabin was originally attached using bondaweb, and you can see how well it has preserved the edges of the fabrics from fraying. The chimney has been worked with tiny fly stitches, the roof has running stitch, straight stitch and whip stitch around various edges and across the middle, the walls of the house are edged with whip stitch, and there is a satin stitch door and welcoming window. Bricks have been hinted at with some little straight stitches which are also helping to keep the main fabric edges down.
It looked a little bereft without some gauzy/chiffon smoke gently rising and twirling out of the chimney, and I have needle turned this into place, then added some back stitches to help keep it all together, with tiny french knots to hint at soot and steam as the smoke hits the freezing air. So cute. 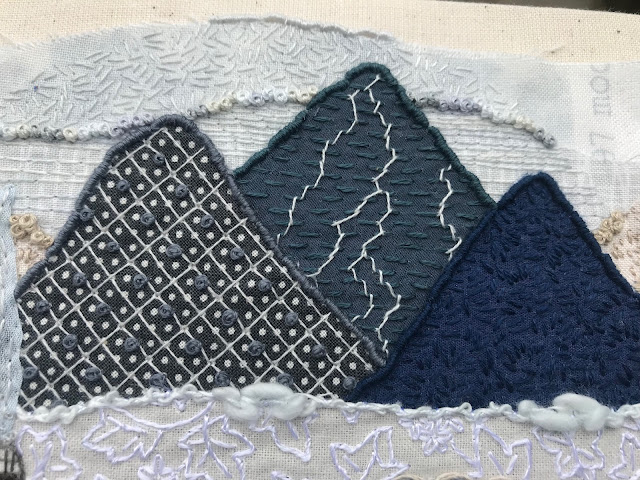 I also particularly like my mountains. In Periwinkle Peak the blue mountain had exactly the same treatment as the centre mountain here, but everything was in the same colour. It is interesting how different you can make the same thing look by playing with the colours you are using. The polka dot mountain is my favourite though. I was just playing around with adding some knots and cross hatches, and this combination just sort of happened! Big chunky french knots (three strand, three twist if I recall correctly) went in first, and then I decided I needed something else so started adding single strand long back stitches encompassing two polka dot spots at a time. 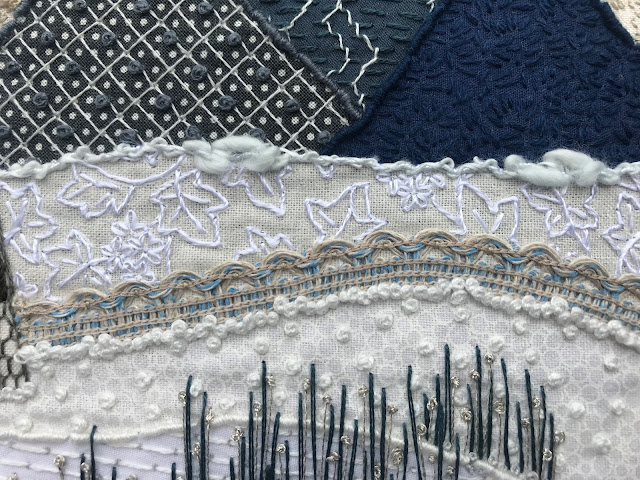 I have used a really lovely bouclé yarn at the bottom of these mountains, which adds fabulous texture and is exactly the right colour (what luck!), and also a particularly wintry looking lacy edging which has the right shades of neutral and blue in it.
The fabric layer between these two embellishments actually changes colour slightly in different lights as I have used a DMC silky thread which flickers between bright white and blue. It's a shame that these colours, the sparkly metallics and the silky lustre threads don't really show their full potential on camera, you'll just have to imagine it (or come and see me at one of my Christmas craft fairs- this little 'scape is definitely coming along!). 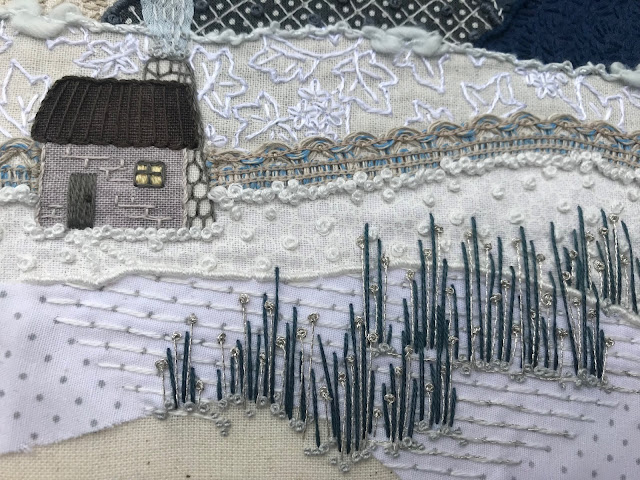 So two little ones finished fairly quickly! I am slowly catching up on my pre-Christmas to-do list, but there is still so much to do!! These have yet to be photographed and edited and turned into cards, prints, postcards.... maybe a 2019 calendar? 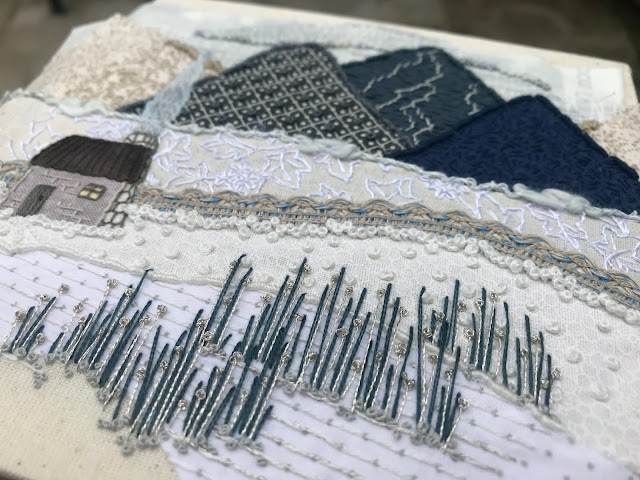