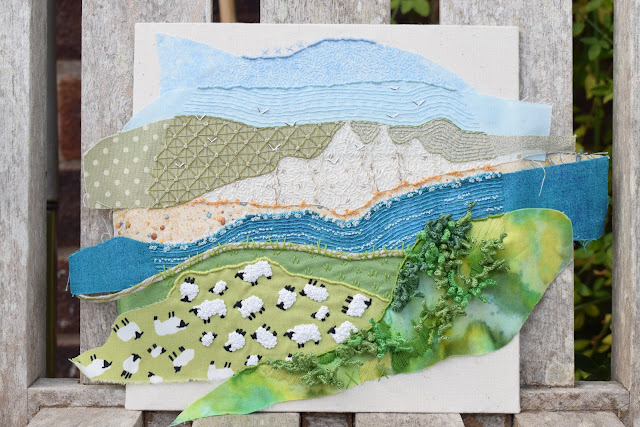 I live in East Sussex in England and I can't imagine living anywhere else (apart from maybe Yorkshire). We are within a few minutes of forest landscapes, open grasses, cliffs, rivers, the seaside, rolling hills.... so much inspiration to soak up. Of course, the more this area keeps being built up as we are also within commuting distance of London, the more of these places we are losing and that makes them all the more precious.
I have hope that one day people will realise how important our countryside actually is, not just for wildlife, but for breathing space, and will pay more attention to where they build and what they knock down. Recently I've been watching a lot of old episodes of Time Team where they dig up green pastures that once housed an entire town underneath the top soil so Mother Nature always wins out in the end I feel- good on her too!! 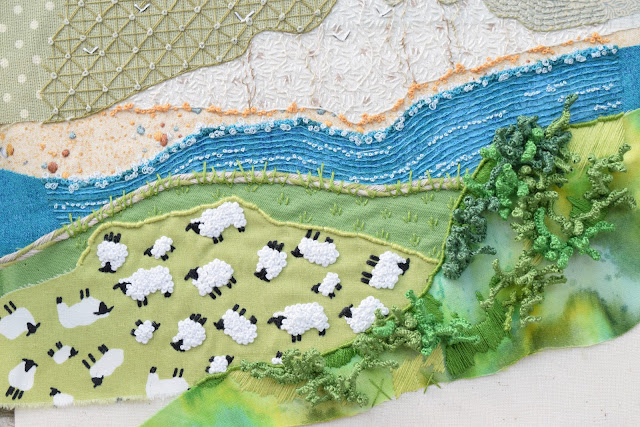 Anyway, stepping down from my high horse, a place I have visited many times over the years is the Seven Sisters, a section of chalk cliffs forming part of the South Downs. It's a very impressive piece of coastline and when I was little we used to go to a big open sheep farm there called (funnily enough) Seven Sisters Sheep Farm, which has since closed down. I had an idea that I would like to represent both of these things in a stitchscape, wanting to include the blue of the sky and the sparkle of the sea as well as the sheep, scrubby grasses and rocky chalk cliffs. 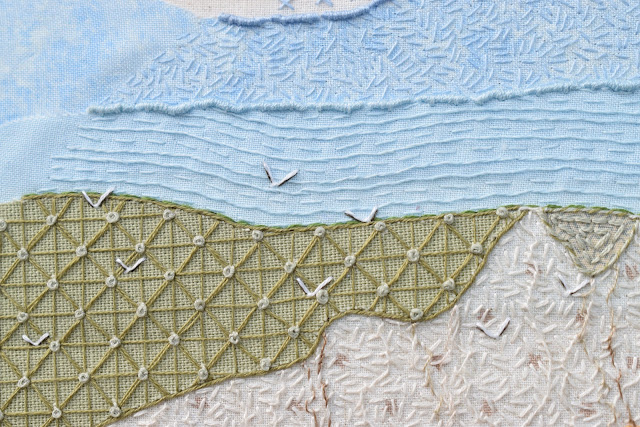 There is a little more pressure when you are trying to recreate an actual place- so many people have their opinions on it- but I think I have succeeded relatively well here and am very chuffed with the final outcome. The cliffs themselves were put on in several pieces using Bondaweb so that they would keep their shape, the green layers just slightly bigger than the dips and holes created with the white fabric so that they overlap. I did have a disappointing moment when I was finishing up the piece as I held it out away from me and it looked so flat!! Which may seem a funny thing to say but the cliffs didn't stand out from the sky at all. I decided to work a discreet row of darker green back stitch all along the top edge of the cliffs which has really helped, and also worked some dark vertical whip stitch up the face of the cliffs to bring a little bit of shadow and depth to it. Before I just had the white whip stitches which add a lovely texture but don't stand out. The darker thread I used for the second whipped layer is a variegated brown DMC thread so it kind of fades in an out. 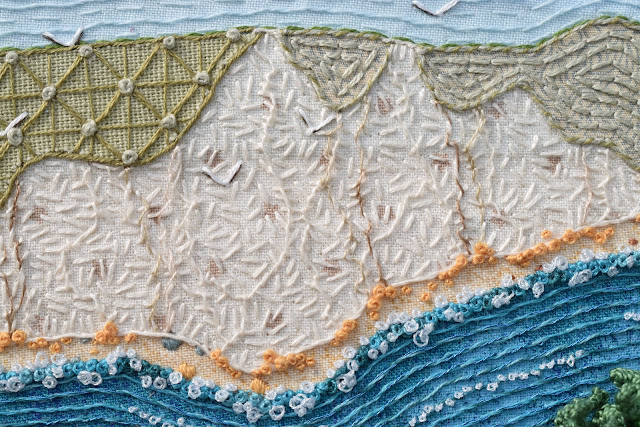 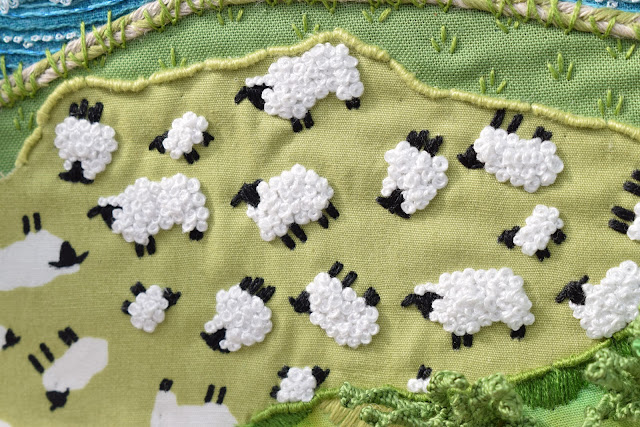 The sheep add such a lot of character! Never mind the fact that half of them are upside down, they look so plump and woolly thanks to the three strand, three twist french knots I've used. I really love this material, and from the comments I've received from my followers, you do too! I have bought a large chunk of it and intend to make a kit using the fabric so you can all have a go at creating sheep but I don't have the time at the minute to put something together and develop it. 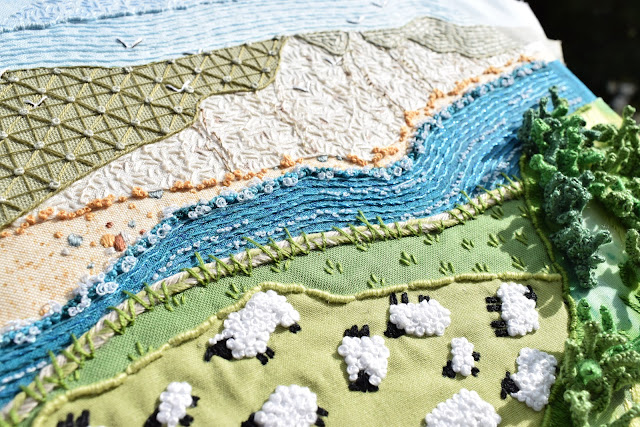 This piece really comes alive in the sunshine as I have used a single strand of a DMC metallic embroidery thread to highlight some areas. A single strand of variegated blue thread was used to make running stitches, and then whipped running stitch over the top of that, with parts of each line then gone over again with the metallic. Because it is only bits of the line that are sparkly, it really makes it look like waves are rolling in and catching the light. Added to that the white thread is also sparkly so it really shimmers! 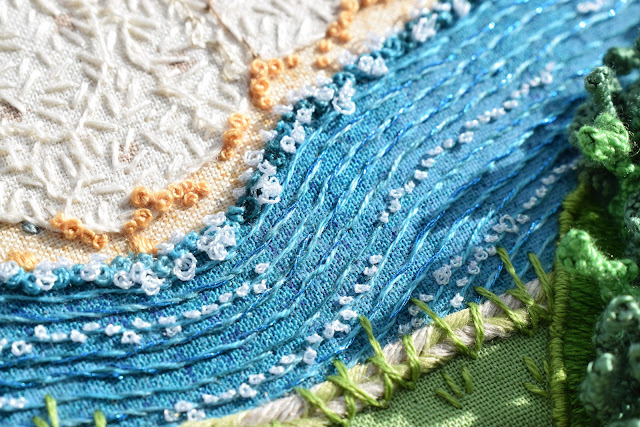 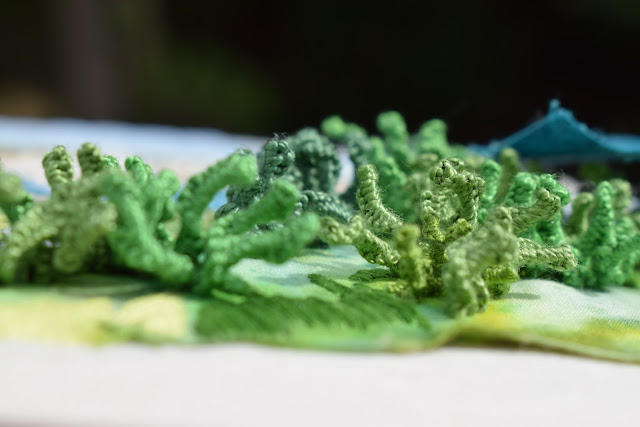 Plus, you may have noticed, I have gone completely potty over drizzle stitch!! Even more so than in my Sea Pink Shore piece. The vast majority of the stitches have been made with DMC Coton Perlé thread which is slightly thicker and gives a different texture entirely. I actually only have these coton perlé threads because they were ordered by accident when I go my thread codes muddled up on my order site, but it was a happy mistake and I have been using them for all sorts of things! 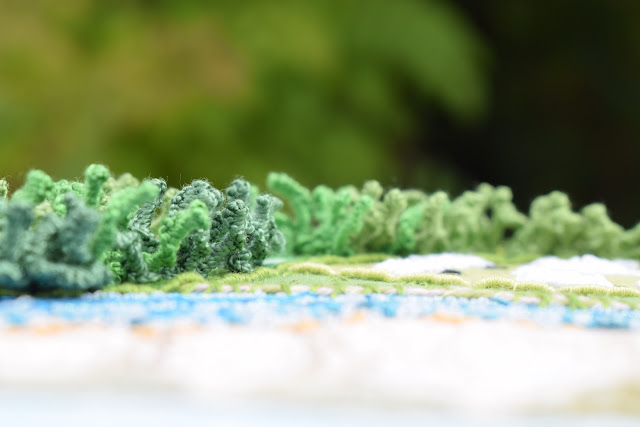 Drizzle stitch is made by pulling your thread all of the way through from the back so that it is lying on the surface of the fabric. You then un-thread your needle and stick the point through the fabric just next to where your thread has come up, then taking the thread you 'cast on', making a loop in the thread and pulling the loop over the needle so that it tightens. Keep casting on until you have several loops (I use long needles for this so that I can make my drizzles really stick out from the fabric surface), the more loops you have the longer the stitch. Once you are happy with the loops, re-thread the needle and pull it through to the back of the fabric and through the loops. The stitch automatically twists in different directions, twizzling madly. It has really helped bring a sense of perspective to this stitchscape and I can't help but tangle my fingers in the drizzle stitches and rearrange them to twist off in different directions. 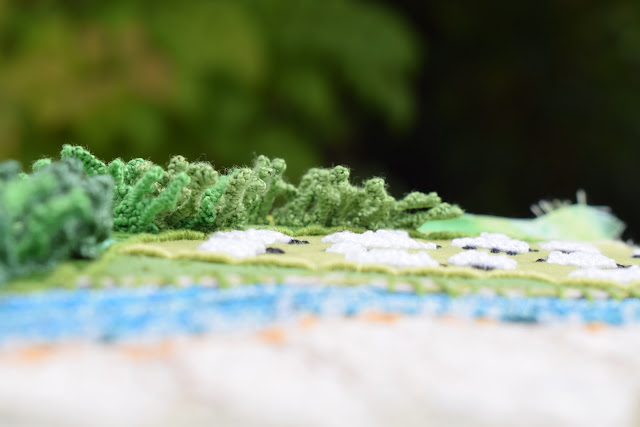