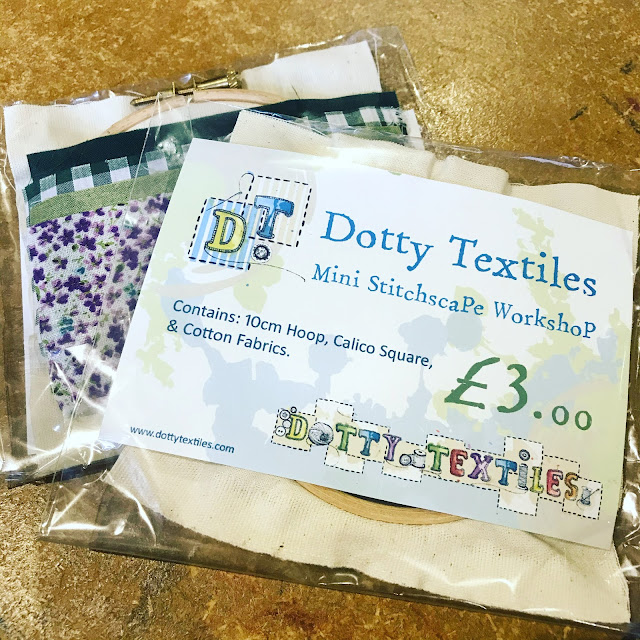 I was tidying up last week and came across a couple of little kits that I made in 2017 for a mini workshop I was running for a Bridge Arts in Uckfield exhibition. These ones were the leftovers, the un-chosen ones. I never made up one of these little kits myself - which only had a 10cm hoop, calico backing and four co-ordinated fabrics in (threads were provided on the table separately)- so thought I might as well have a crack at it now!!
The purple one then sold on Instagram funnily enough. 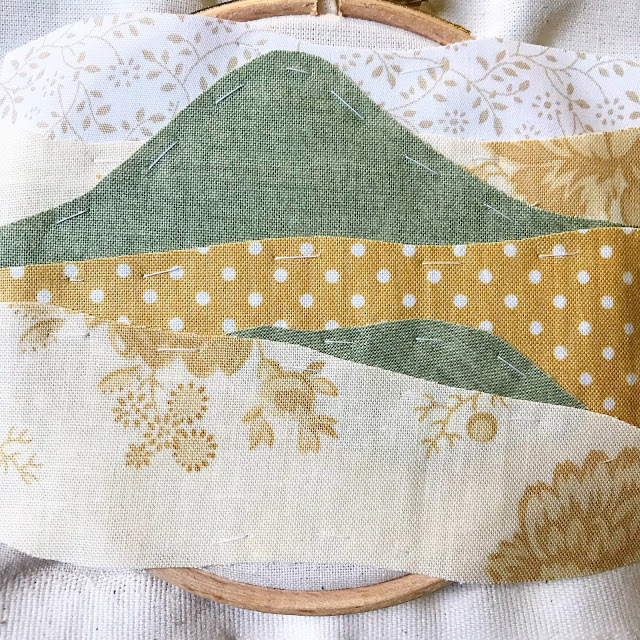 This one caught my eye out of the two, making me think of wheatfields or cornfields or some-such. It's funny how tastes change, I probably wouldn't put this green in with these fabrics now if I could avoid it, it's slightly muted and makes the collection look a tad washed out. Something deeper would be better and create more impact. I've tried to put this depth in with darker threads instead although it hasn't entirely worked I don't think. 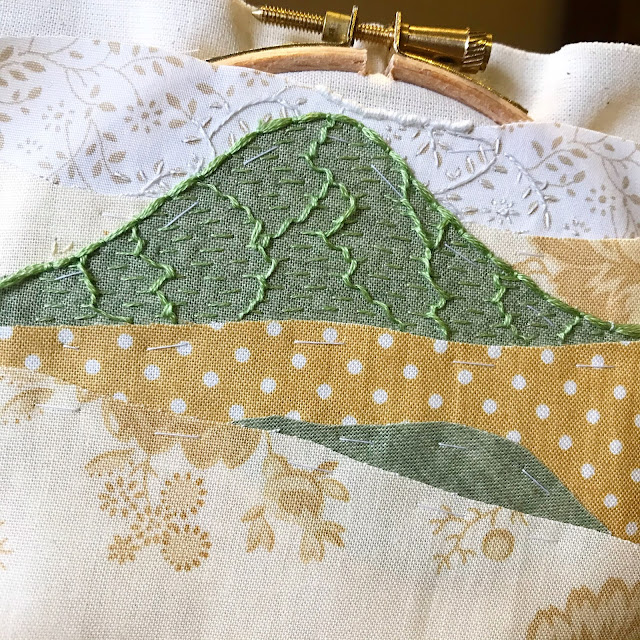 I started by matching the green, working a running stitch and then a perpendicular whip stitch  topped with couched threads all in the same colour. This didn't really stand out at all so I then tried adding a single strand back stitch just underneath the couched stitches, and some more whip stitch along the same lines. Later on I decided this still didn't work and added a third darker colour which is better but I'm not completely in love with the final effect I have to be honest. 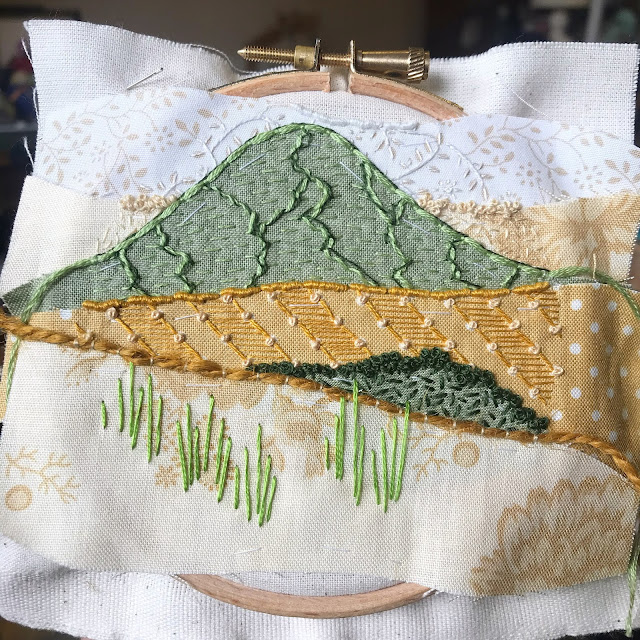 I do really like the effect on the polka dot fabric though, it reminds me of fields that have just been harvested and the neat rows of hay bales that are left behind. I initially worked back stitch following the diagonal grid line through the dots, then added single stitch straight stitches along the horizontal grid line and filled the gaps in. French knots were added on every polka dot and later on you'll see I've also added tiny single strand one twist french knot poppies to this area. 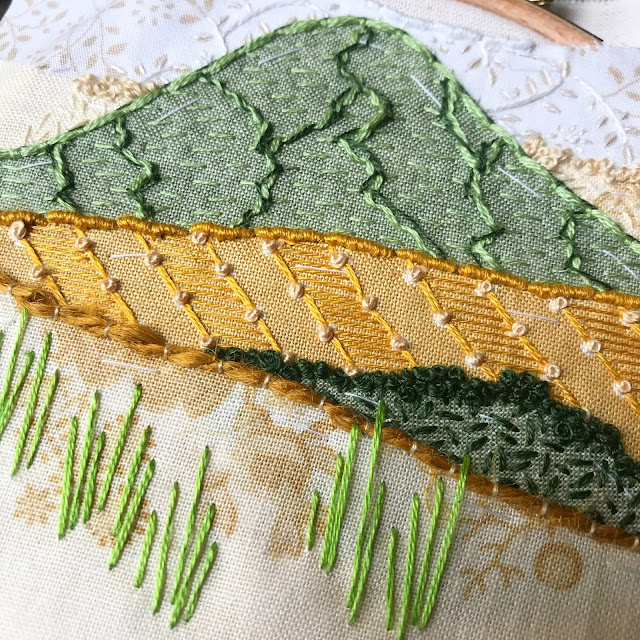 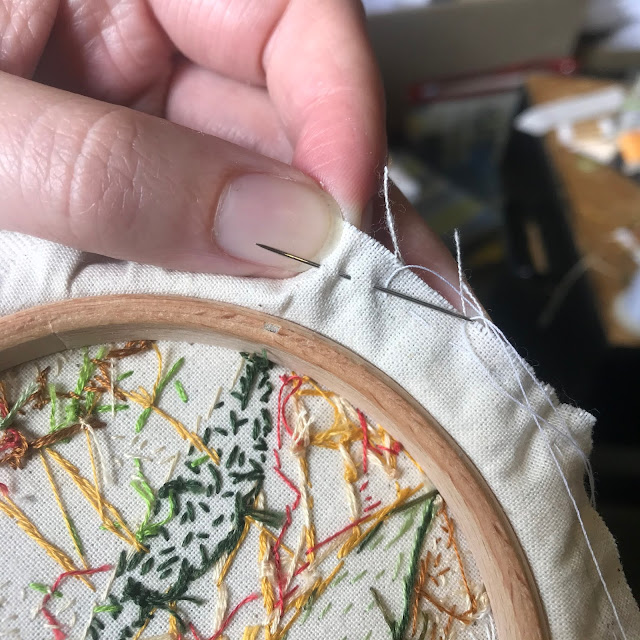 One thing I obviously wasn't thinking about when creating these kits for my workshop was the space required to draw up the back!! I had barely anything to work with which was a challenge but I got there in the end. (A good inch is usually required at the very least.) 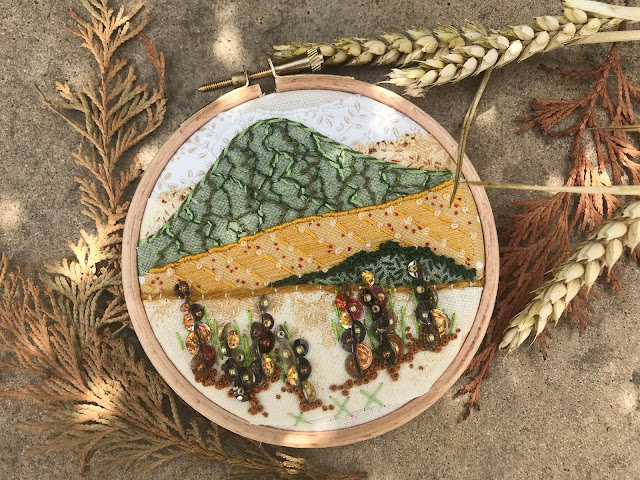 I wanted something shiny and a bit more flamboyant for the bottom layer - the upper layers were all dull and muted and that green (...eek) so sequins were definitely the way to go. If you have a piece of work that is looking a bit flat and dull, stitch in a discreet shiny thread or some beads, or something lustrous/shiny/metallic/glittery and you'll get an instant lift. It doesn't have to be full on hot pink glittery spangles, just something that catches the eye or seems to glow from within, like it's been touched by the sun.
Somewhere on Instagram I'd seen a textile artist who plays and experiments with sequins and it seemed to me she was folding large sequins into 3D shapes. I really wanted to have a go at something similar and I have a big bag of steampunk inspired sequins where there are lots of different colours, shapes and textures. These I have folded in half and secured with a bead but it was a developing idea because the first stem wasn't very stable and kept flipping or twisting round which didn't look great. I then worked another stem alongside the first with the folded edges together and also overlapping slightly to help prevent the twisting. The very top sequins, or ones that are going over my jute string trimming, may also have a tiny stitch into the bottom of the sequin itself to stop it from moving. The bottom sequins are more embedded and supported by the french knots which I added in afterwards. 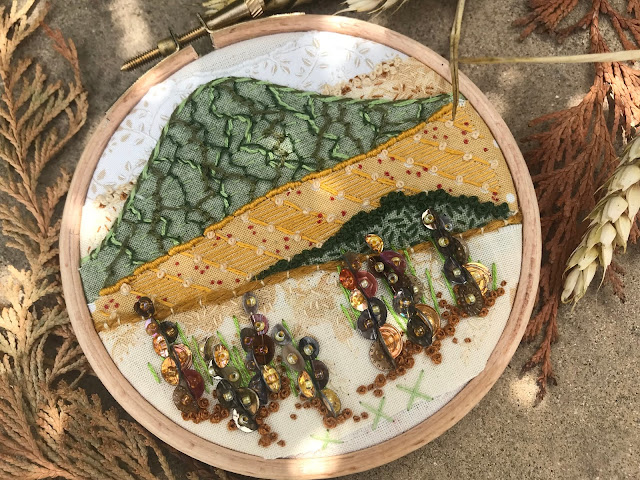 I LOVE the way these sequins are all different colours and textures. Some seem to glow more on the inside, like candlelight on brass pots in an old Victorian kitchen, others are darker and less shiny, some grey, some bronze.... the collection of them all works really well together I think. The redness of some of them fits in well with the red of the poppies, and I had to revisit the layer above the green hill with the seed stitch and french knots to add some of the darker brown colour I used for the french knots among the flowers to try and bring that into balance as well. 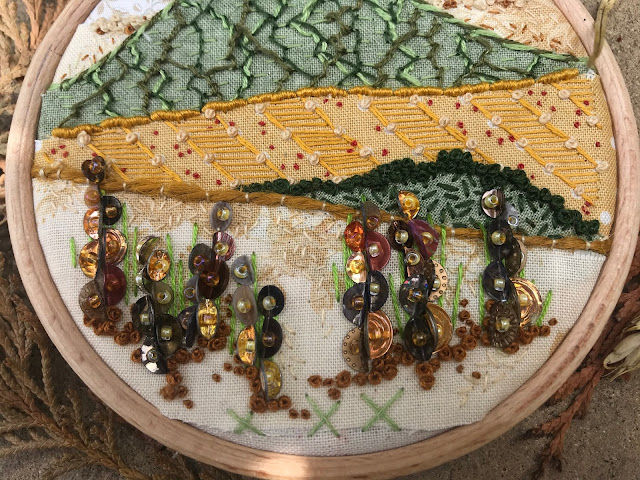 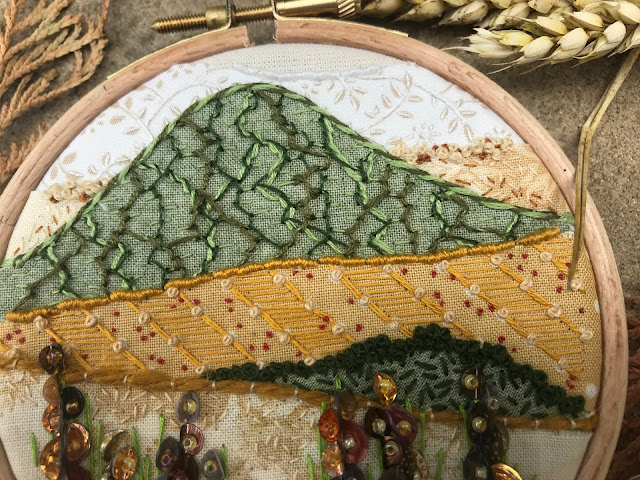 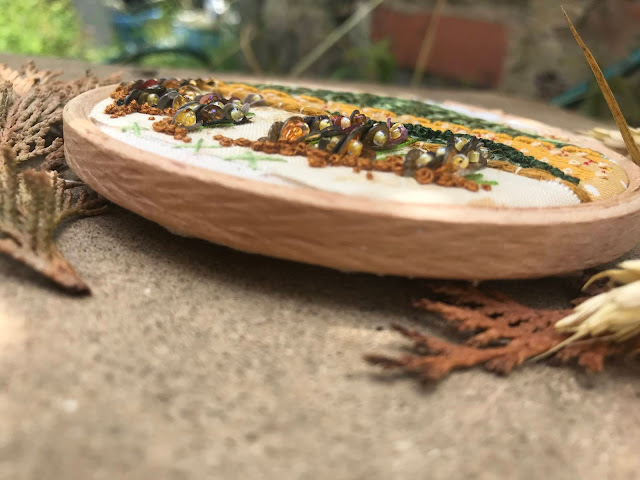 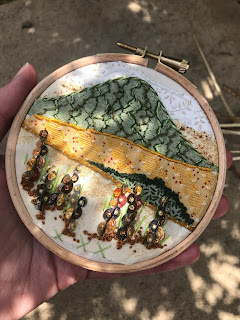 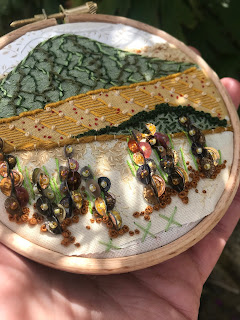 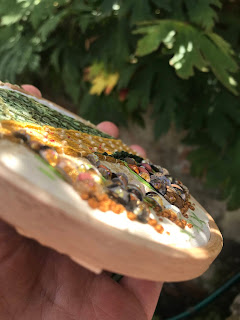 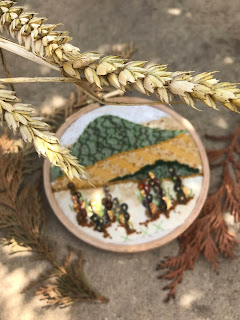 These little pieces are certainly more of a challenge, wanting to fit everything in that would normally appear in the larger scale hoops but having to be fairly simple so it doesn't look overcrowded. All of the drama with this one is at the bottom so it's nicely weighted and the folded sequins feel amazing to run your fingers over!!
This one is destined to be on my hoop wall which I've been developing over the lockdown period. I have hoops of all sizes filled with Stitchscapes - some I stitched for pleasure, some that were kits but have sold out, some that I've put back into a hoop after previously mounting onto a square of card and some that are just pretty experiments I don't want to squirrel away into a sketchbook. 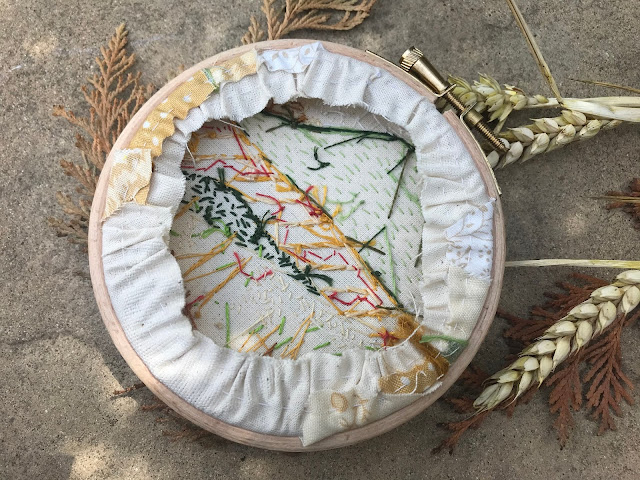