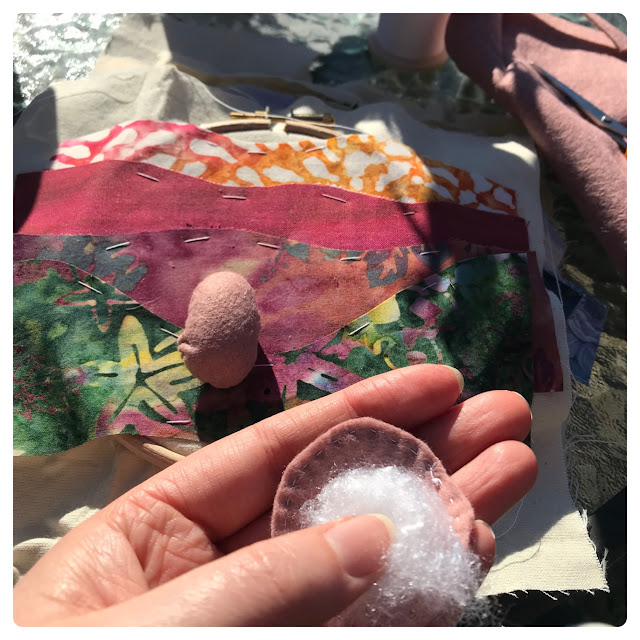 I thought I'd give a bit more background on the felted rock Stitchscapes I recently finished as they came about so quickly and they are such fun to make you might want to have a go yourself!
The first piece I made with the felt rocks was actually the larger Heather Valley Stitchscape and they worked really well in that piece because the hoop was a larger scale, at 22cm, so having chunky pieces of padded felt at the bottom really grounded it and brought it to life. I am increasingly loving Stitchscapes with a lot of texture coming out of the hoop and finding new ways to make them stand out loud and proud from the wall - to the point where if I stitch a 'flat' piece, it looks odd! 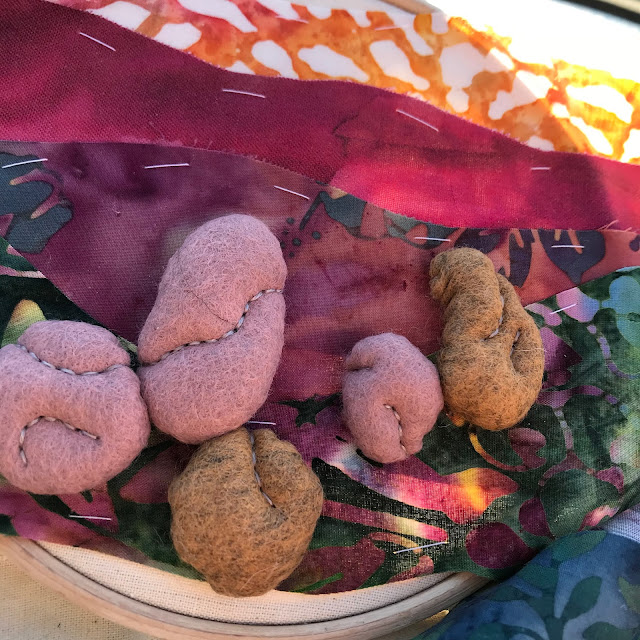 These pictures are mostly phone/Instagram snaps I'm afraid so they aren't the best but hopefully they'll give you a clear enough image.
After the Heather Valley piece I still had quite a bit of the wool felt from the-stitchery left over and I pondered over the colours and how different colour combinations with the fabrics beneath the rocks could create new colour palettes and landscapes. Sometimes all you have to do is to change one background colour and the entire hoop completely changes so could the same be said for the rocks? 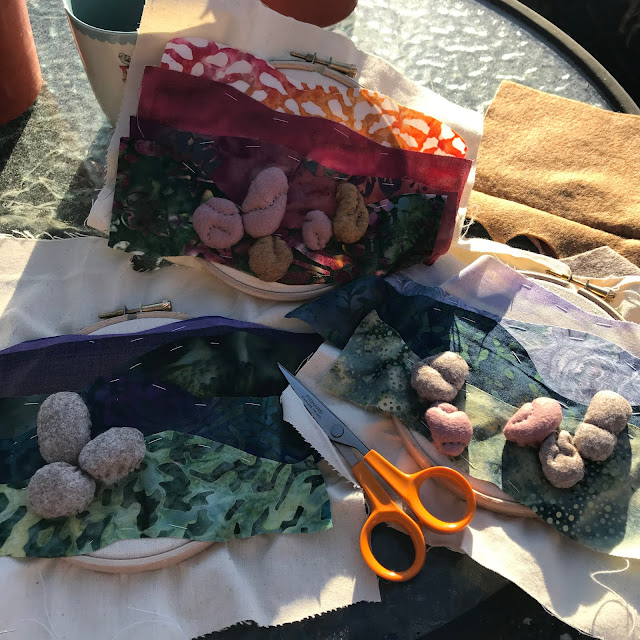 It was one of those - I must do it IMMEDIATELY! - ideas and I disappeared up to my bedroom where the stash is kept intending really to only make one other hoop to see how I could make it different. Instead I ended up putting together three 12cm hoops because I found them all in a pile and it seemed rude not to use them all. The fabric choices were sort of based around the felt colours; the pink felt seemed like the rocks would be tinged that way during a sunset maybe and the grey felt represented more of a gloomy, dull and mysterious valley somewhere. There are a lot of batik fabrics used in this little collection and I'm not sure I can explain why that is exactly, it just seemed like the right way to go. 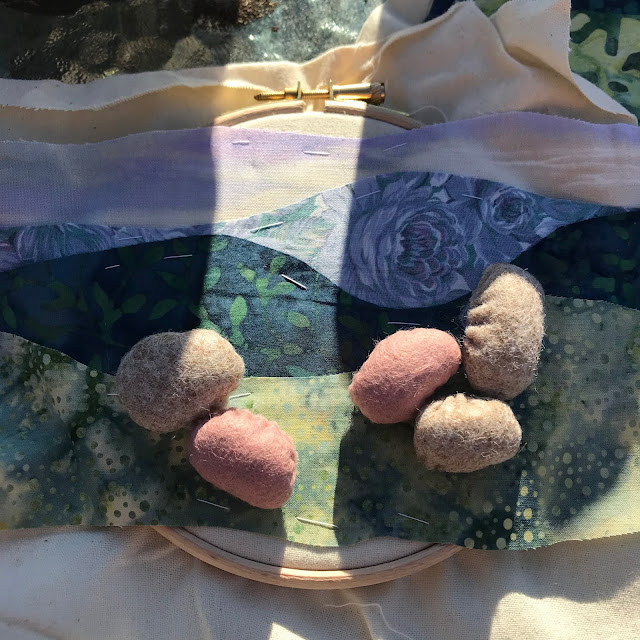 The rocks are all created individually. A shape is roughly cut out of the felt (much bigger than the final intended size) and a running stitch stitched around the edge; a little bit of toy stuffing is added to the centre (as shown in the top picture) and then the running stitches drawn up. The tighter you draw these stitches the smaller the rock gets to you have to sort of feel for where you want to go - the stitches need to be tight enough to keep the wadding in and a nice rockish shape, but not too tight that it becomes super small with a hard bunched edge.
Once my rocks were all made I tried to 'organically throw them' at the hoops so they didn't have a regimented appearance. It needed to feel like natural rock formations which is much harder than it looks! When happy with their positioning, I took photos to make sure I could remember how they sat and then you basically stitch the rocks on by coming up underneath the rocks, through the fabric, with your needle and grabbing the edges so that all of the edge is tucked under, sweeping in any tufty toy stuffing that may be making its escape. You can also use this to position odd little dips and shapes into the side. To further stitch them down and to add texture and definition, I worked random lines of back stitch completely through the rocks to add a sort of quilted texture and stop them being so smooth and pebble-ish. 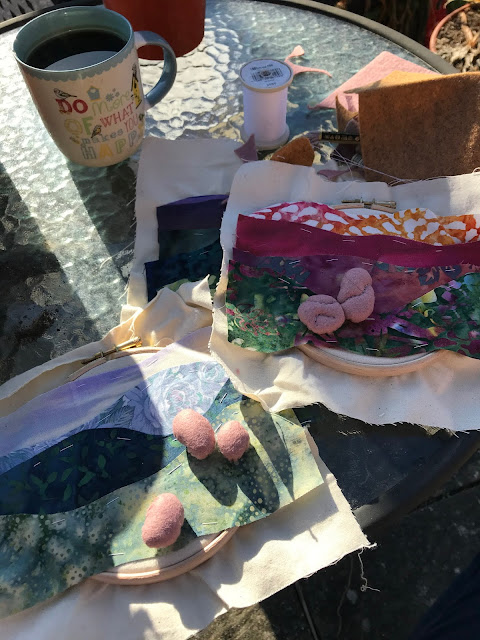 Of course, working on these in the garden, in the sunshine, in March, was a bit of a treat! It was one of those rare days when it was warm enough for your body to be fooled into thinking summer was on the way, and no wind to add a chill factor. I even got a little burnt sitting outside! 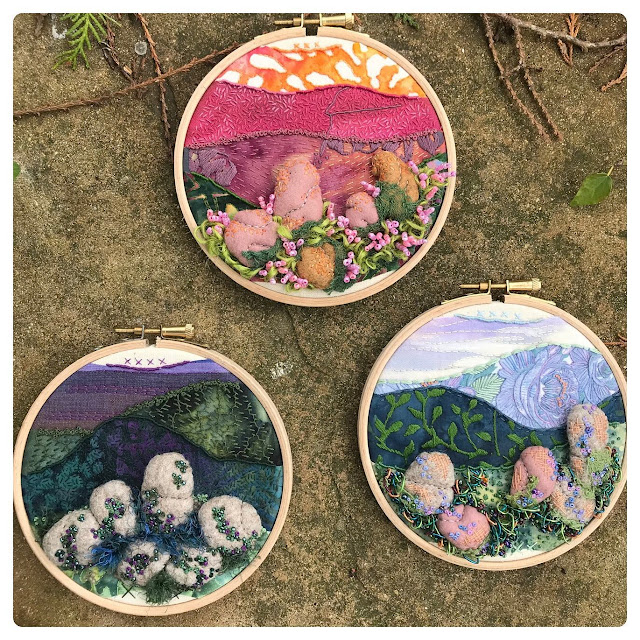 I've used lots of techniques in these hoops that I am dying to try again. I had originally said that I was sticking with three of these rockscapes and then moving on to something else, and if you follow my Instagram you'll have seen the crazy new pile of Stitchscapes I've just layered up with fabrics and have on my to do list, as well as a new hoop full of Stitchscape Pebbles that I started yesterday (and a partially designed kit I'm determinedly ignoring). But I've also just found myself ordering a sample pack of 60 different shades of wool felt pieces and a wool felt shade card from Billow Fabrics.....it would seem more felt rock Stitchscapes are on my horizon! Maybe I can combine some of them with the hoops I've layered fabrics into - every hoop can only be improved with a couple of rocks in, right? 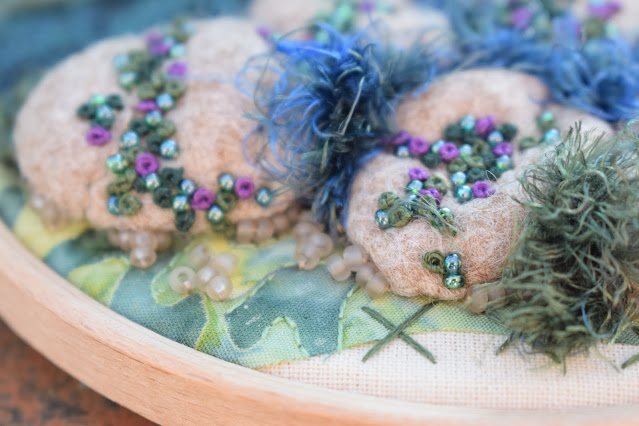 The techniques I'd like to try and revisit include the combination of shiny beads and french knots dug into the rocks. The difference between the completely matte felt and shiny beads is a match made in heaven, and I love the way the beads dimple into the felt where I've pulled them a little tighter. I also like the addition of seed stitches to add texture to the rocks, and I'd definitely like to do the sticks of beads again - they are just so much fun to look at and feel under your fingers! 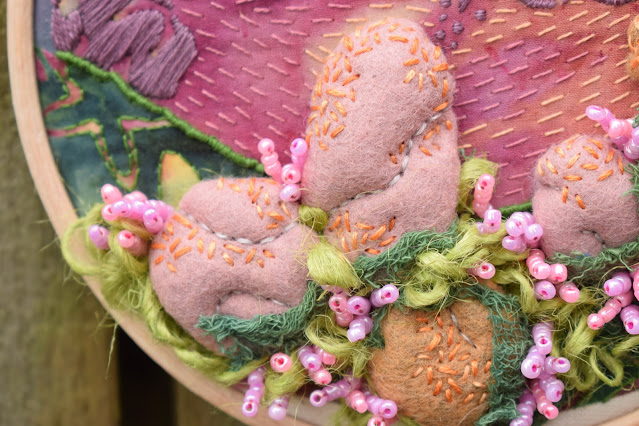 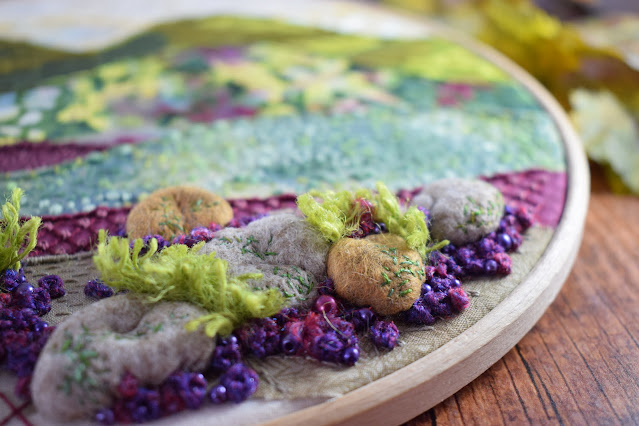 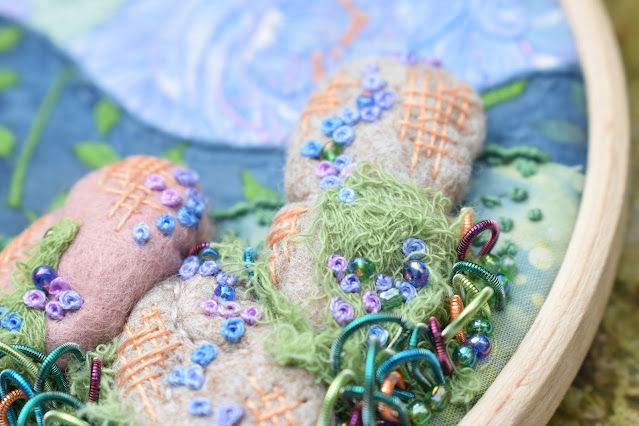 My least favourite rock technique is the cross-hatched stitches. I don't know whether it was the colours used or just the harsh crossed lines but the softness of the beads and seed stitches is much nicer I think. I'd like to use the smooth purl wire coils too but maybe with a slightly more restrained colour palette than the one I've used here. I also want to try using straight sticks of the smooth purl with a bead on the end, combining these two to make new types of bead stick!!
This is exactly what I love about Stitchscaping, sometimes you try one new idea and it just creates a massive flow of new ideas and combinations.... Who knows where this could go? 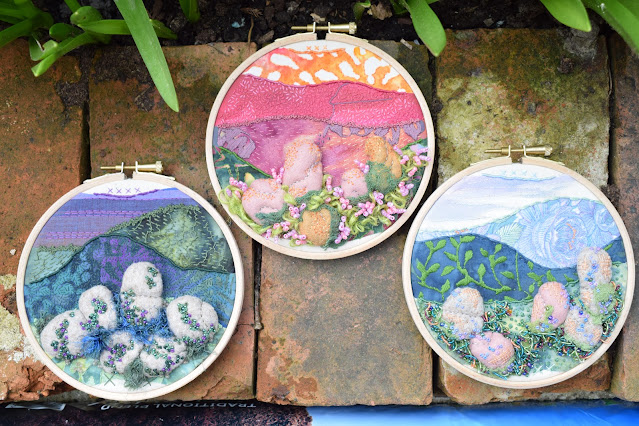