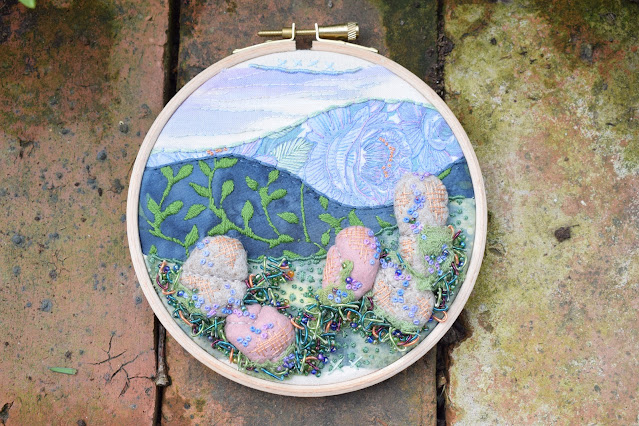 The last little Stitchscape in my set of three featuring felt rocks is finished! It completely flipped from when I first put the fabrics together as my initial thoughts were that it would be a kind of soft, misty morning piece with pale greens and lilacs. However, before I started this one I'd gone down a rabbit hole of discovering goldwork purl pieces (long lengths of tightly coiled wire in various widths and colours which can be trimmed to length and are hollow) which ended up with several different colours of 1mm smooth purl lengths in my Etsy basket! 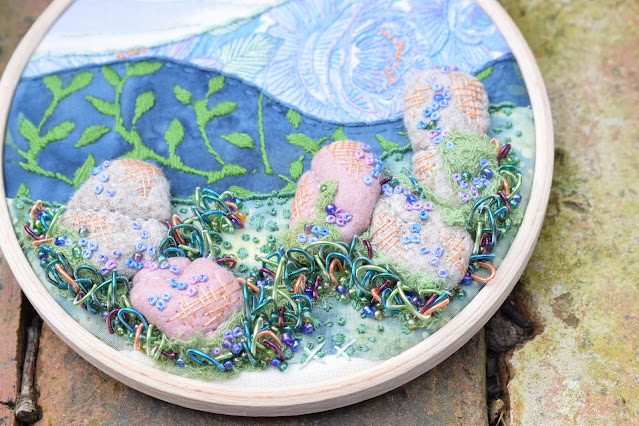 The metallic colours are a bit darker than my original vision but I was very excited to have a play around and see what I could create. I had started the top layers whilst waiting for the purl pieces to arrive, but as soon as the parcel hit the doormat, I was snipping little pieces off and threading them to make fun loops around the rocks! You can make these pieces as big or small as you like, just cut them to size and thread a needle (I used a beading needle) through the whole length. Depending where you put your needle back through the fabric you can keep these as flat pieces (which I think is more traditional for goldwork) or as I've done, make fun loops that interlock and go in all different directions. 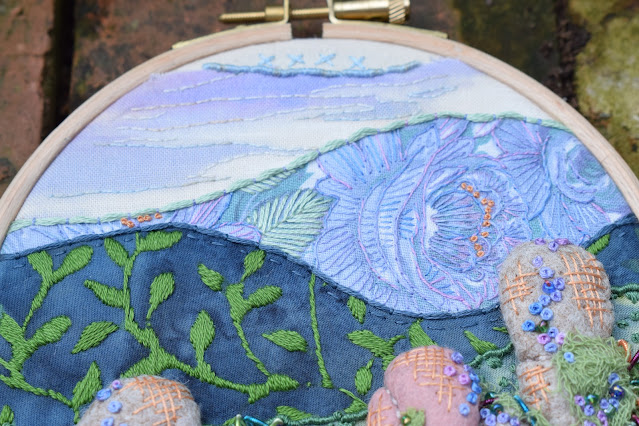 The top layer is a beautiful fabric print made to look like a sunrise/sunset with silhouetted birds. I haven't used the birds in this piece as they would be too large but the colour of the sunrise clouds is really pretty with cream and purple blended together. I've just worked a single strand of back stitch around the more obvious colour changes or cloud lines and used a variegated thread to try and match a little bit of the blending of colours. The same thread has been used to make bullion knots at the top of the fabric although it's come out quite blue there. 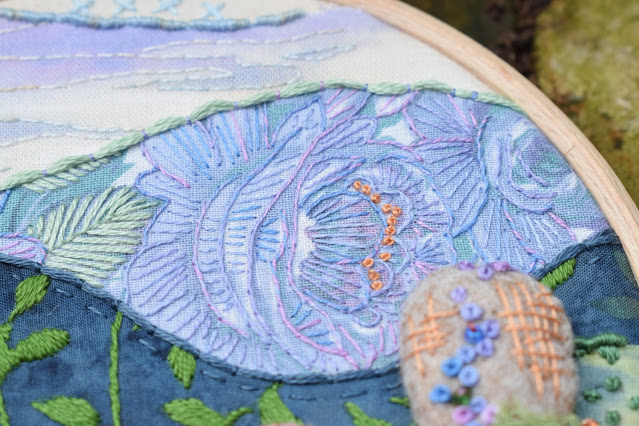 The next layer down is a pretty floral piece and I wanted to keep as much of the texture of the flower as I could. The print itself was slightly blurry so I had to guess or go over some of the details but where there were obvious petal lines I worked a single strand of whipped back stitch, again with a variegated thread so there are some differences in colour where I've whipped over the original back stitches. Between those lines I worked single strand straight stitches to try and show the direction of the petals and add more texture. At the centre of the flower I've made two strand, one twist french knots in that orange/coral colour to help start balancing some of the smooth purl in the same colour at the bottom.

The minty leaves in the centre were worked with fly stitch using two strands so they stand out a bit more, and the same minty colour was couched to the top of the whole layer as a contrast. 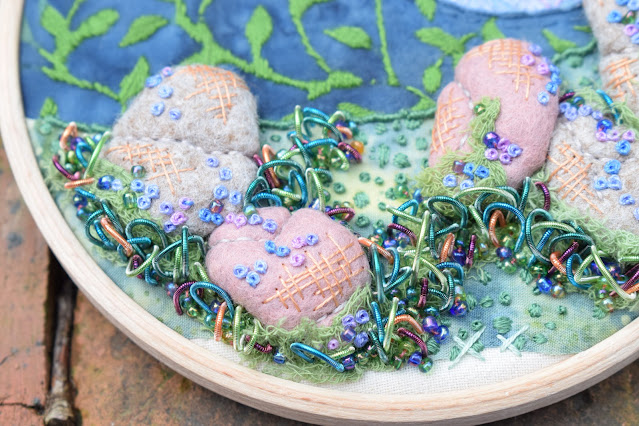 The blue/green batik layer under that has had all of the green leaf patterns covered with satin stitch, although I've tried to vary the direction of the satin stitch as I prefer the way it looks rather than having everything going in the same direction. Where I could I went with the length of each leaf and worked outwards along the stems.

Not all of the blue edge was covered by satin stitches so before working another line of couched thread along the fabric edge I've done a discreet running stitch just a couple of millimetres in from the edge. This is a great technique to keep those edges neat where your stitches actually in the layer may not be protecting the edge. If you are doing the same thing you want to work your running stitch far enough in from the edge that it doesn't fray. 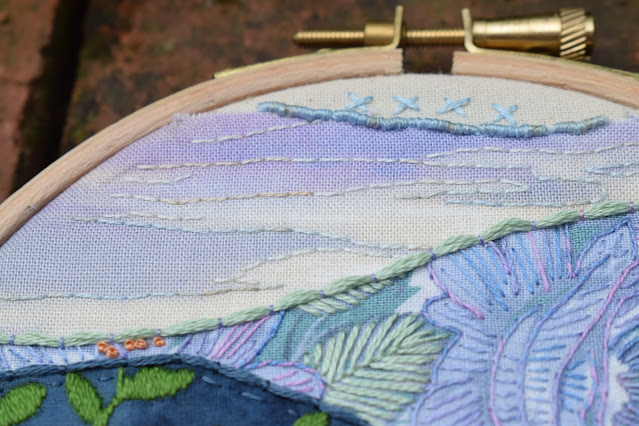 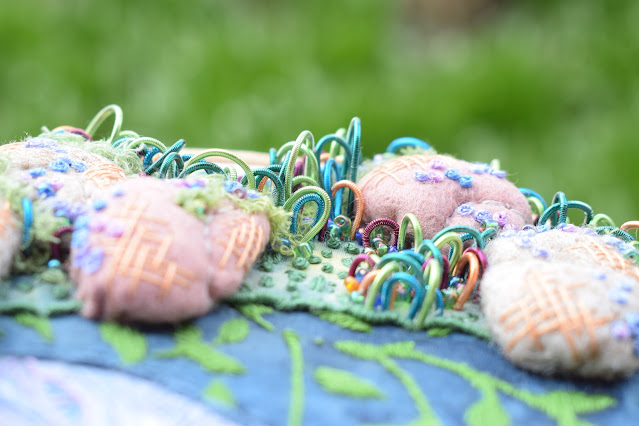 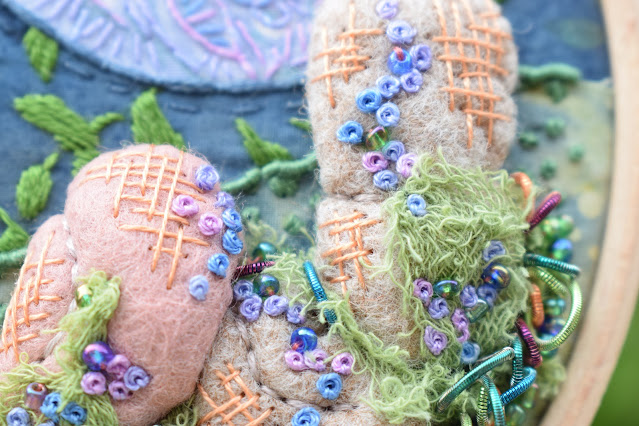 Back on my crazy bottom layer I started to cover every spot on the batik print with some rough satin stitches. I could have done this before I started putting the cotton scrim and smooth purl down to build up texture but I was so excited about playing with the purl that I decided to forgo that bit and just filled in any gaps later on.
I also found some beads in similar colours to the metallic strands and stitched these underneath the bendy lengths to fill in some of the gaps and make it look more like a ground surface. I think this has really helped to bring it all together - especially when some of the beads were then stitched onto the rocks as well. 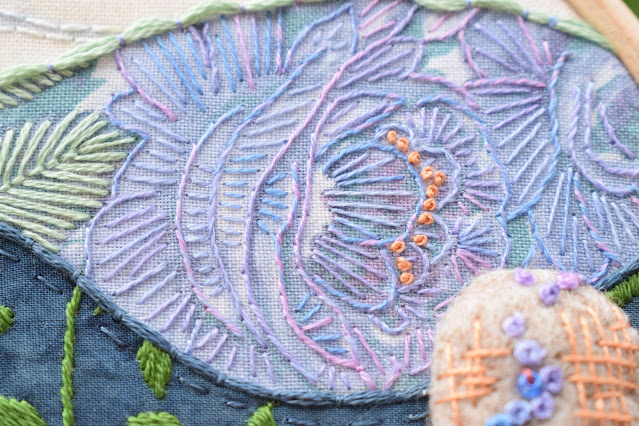 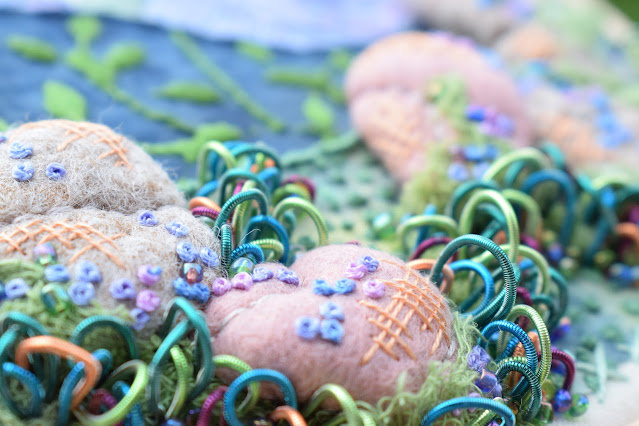 I was a bit worried that the colours weren't gelling together fully so I've taken more of the variegated purple that I used for the flower and added french knots on the rocks around those beads to add some texture and bring the purple down through the hoop. I was equally as concerned about that orangey colour so used straight stitches to work cross hatched patches on the rocks as well which clash rather interestingly with the purple. 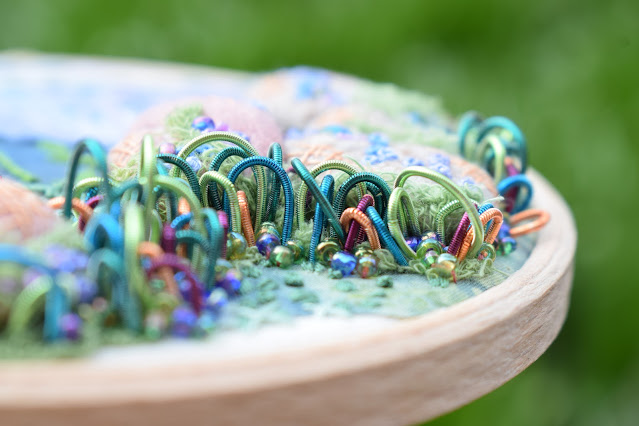 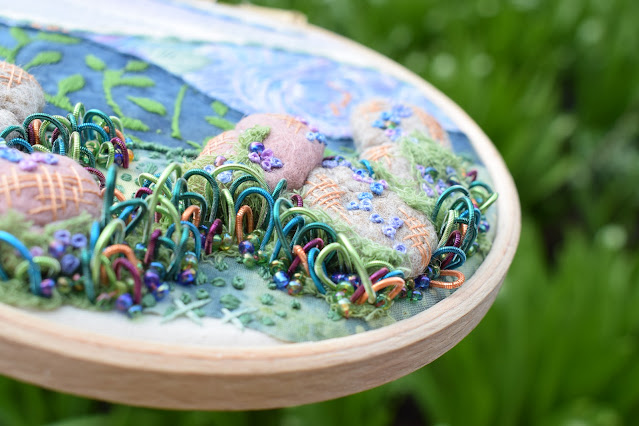 There is quite a lot going on at the bottom of the piece in terms of colour and texture, matte and shine and I think I'm on the fence a little bit about my colour combinations. I'd be interested to try using the smooth purl again but restricting the colours within a piece or making the loops smaller. It's definitely something I'd like to play more with as an alternative to sequins - as I've said before I love a bit of shine in a Stitchscape to help lift the generally dull appearance of the cotton fabrics and threads. 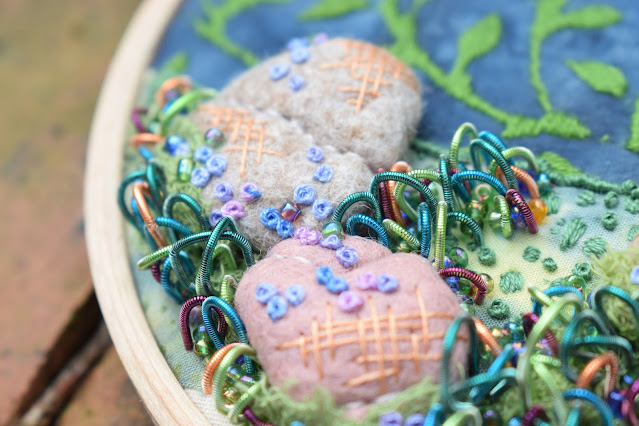 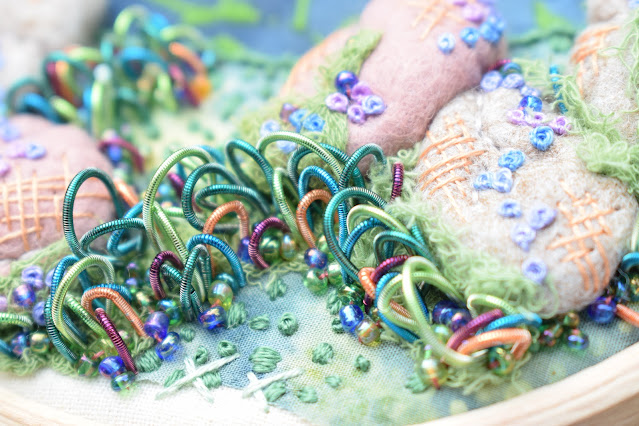 It feels great to run your fingers over though, all springy and bouncy! I'll have to write a separate post about all three of these pieces together and maybe with the original Heather Valley piece that inspired this little trio.
The stitches that have been used in this piece are; straight stitch, bullion knots, back stitch, couching, whipped back stitch, french knots, satin stitch, beading, fly stitch, running stitch and smooth purling I guess! (I don't think that last one is a stitch but I'm not sure what to call the stitches in the purl loops.) 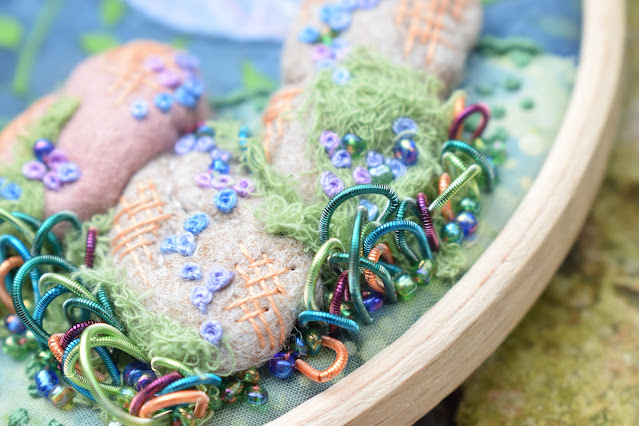 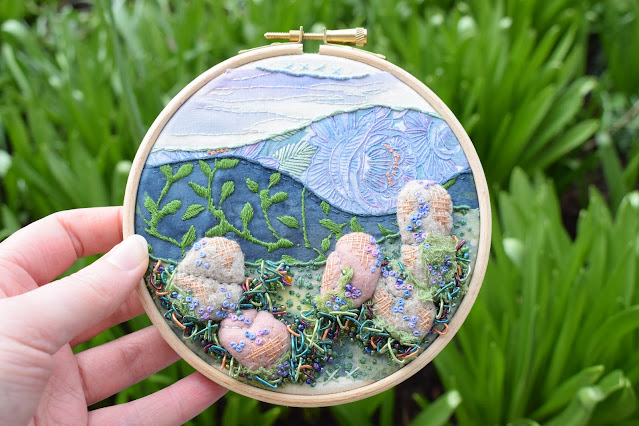 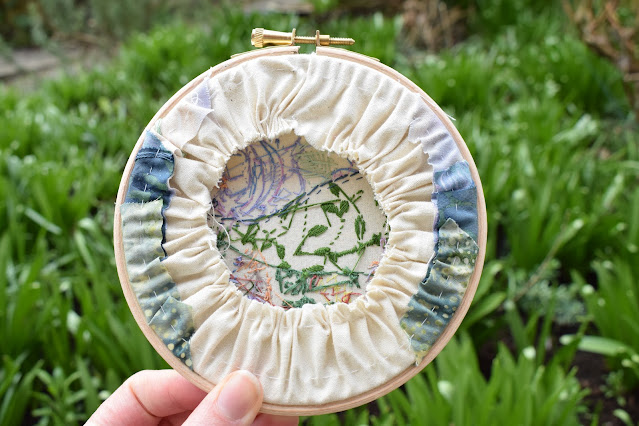