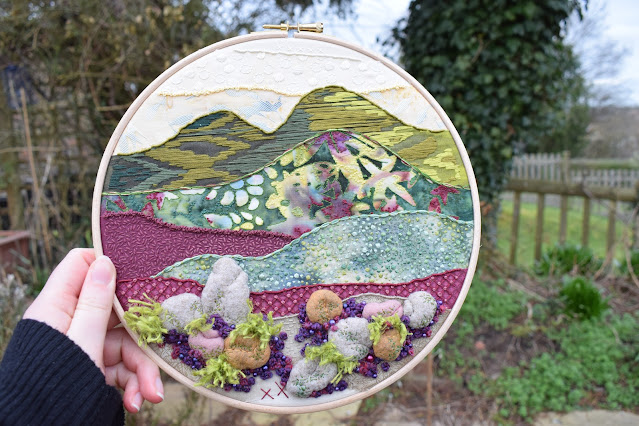 Following on from all of the re-framing I've been doing lately, I suddenly find myself with lots of larger hoops lying around the place looking sad and empty!
I can't remember what inspired this piece - probably one of those 'wake up at 3 in the morning with visions of heathery landscapes which must absolutely have rocks in them' inspirations. This piece reminds me a little bit of my Moorland Stitchscape which was made over three years ago now! It had padded 'clock' rocks at the bottom of it, where I stacked layers of felt and needle turned clock print fabric over and under, then stitched through the layers to give a quilted appearance.
Whilst tidying up our bedroom recently (which had got a little out of hand) I came across some beautiful wool felt bought a couple of years ago in an S-Box from the-stitchery in Lewes. The colours worked really well together and the pink hues looked like they would work perfectly with this heathery creation! 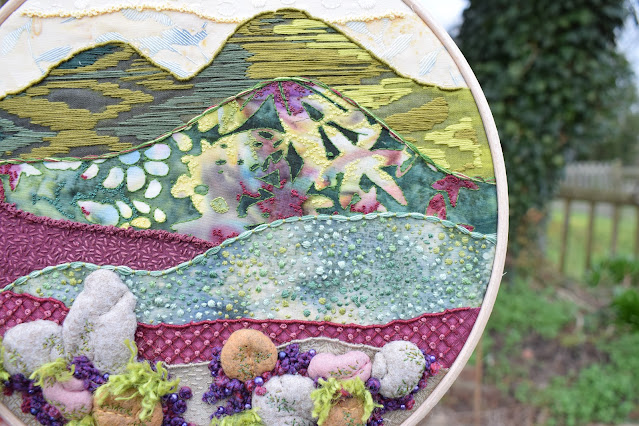 The rocks were roughly cut from the felt (no pre-planning here!) and then I ran a row of running stitches around the circumference, balled up a little bit of polyester toy stuffing and drew up the stitches so that it was a tight little ball-ish shape. They often end up looking sort of the same shape so you have to be quite obvious when cutting out the initial felt piece to try and make it look like a tall or skinny stone, plus it has to be quite a lot larger than the size you want it to end up.

Once I had a handful of different coloured/sized rocks I started stitching them down, working little stitches into the edges and just working my way around, tucking the rough bits underneath the rock. To hold them down further I also worked some random lines of back stitch through the whole thing which then made little dents and pulls into the felt so that it looked a bit more natural.

As I was starting this piece I had also spent a whole day making more Woollydale II kits and had a scrappy piece of the green jute trimming left over that I couldn't use. Rather than throw it I cut it into smaller lengths and worked a row of back stitches across the tape between some of the gaps in the rocks then, once it was securely stitched down, broke up the weave of the jute so that they were just strands. This has worked really well and was so quick to do! The colour is just right to match some of the zestiness of the layers further up as well. Love a happy coincidence! 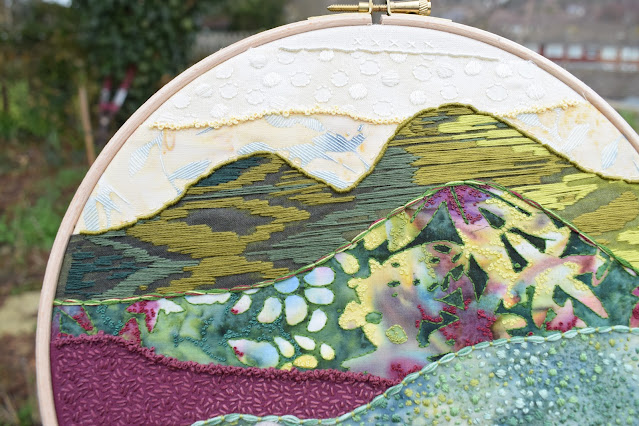 This piece was worked from the bottom upwards, but I'm going to talk you through the layers from the top down. So the top layer is a paste print of lovely big circles and some of these I have covered with satin stitch and others gone round with back stitch to create a contrast. Bullion knots have been used to edge the layer and little crosses (which I find I'm putting on all of my Stitchscapes at the moment!) stitched onto the calico at the top.

The layer beneath this is a really lovely pastel fabric with a creamy background and pale inky leaf shapes. I've chosen a pale blue/grey to just work straight stitches over the blue shapes, changing direction on different leaves to make it more interesting and to catch the light in different ways. A discreet cream running stitch (single strand) has been worked across any blank areas at the top to help secure that edge down before french knots are worked along the fabric edge to keep things neat and tidy. 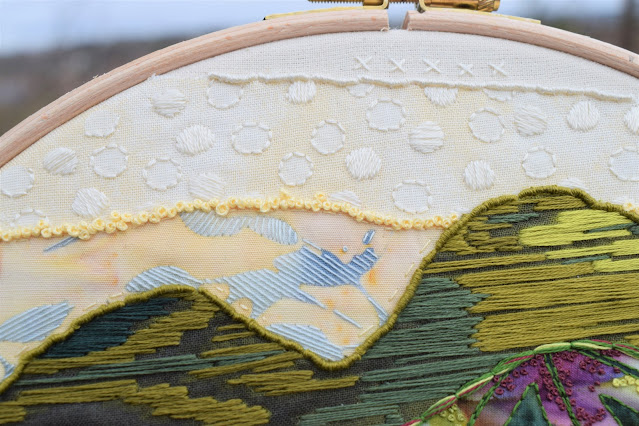 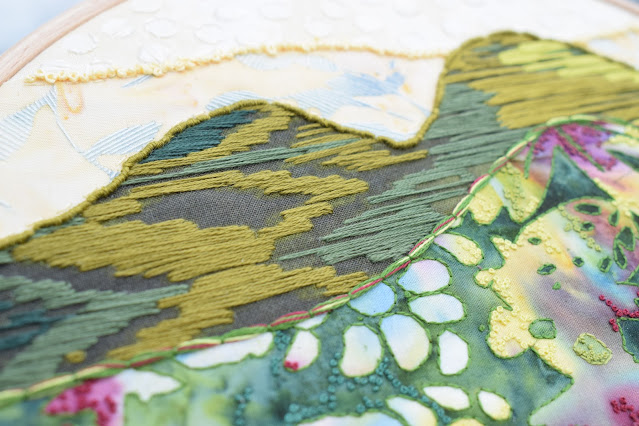 The lovely mountainous fabric is a brilliant piece I picked up at the Ardingly Quilt show a few years ago. I think it might be a Moda design but I'm not sure - it does gradient on one side to a green so dark it's almost black and on the other side a green so light it's like a pale lime. In between it has these great zig-zag patterns of colour which I've tried to match with the thread and worked long stitches over these areas, picking out the pattern. To me it looks like clouds passing over the hills casting shadows on the landscape below. 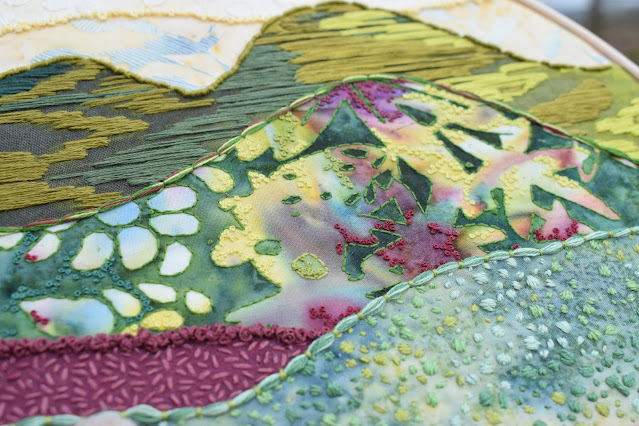 Underneath that is a fantastic batik fabric which has splashes of the purple I have incorporated for the heather flowers as well as a touch of sunshine and perhaps yellow gorse flowers? This layer sort of developed as I stitched it as I only intended to work a single strand of back stitch around each obvious shape, but then ended up working lots of different one strand, two twist french knots in the coloured patches to add more texture. Something that took ages and is one of those processes where you start to question yourself part way through! 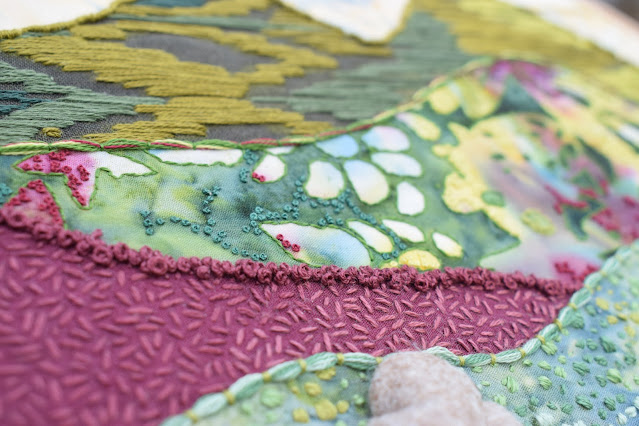 I added a couple of layers of this aubergine purple to give a real swathe of heather through the landscape. I don't know if you've ever been in an area where the heather grows but it grows in huge clumps and when it's in flower it just carpets whole fields worth of land like someone has accidentally tipped a great vat of purple paint from an aeroplane. Google it if you don't know what I'm on about, it'll be worth it!

Anyway, the top layer of purple has been very simply treated with two strand seed stitch just to add texture, and edged with french knots to emulate the little flowers themselves.

Underneath that is possibly one of my favourite layers, although again one that took lots of time(!), where I have made little almost-satin stitches - they aren't quite neat enough for proper satin stitch - over every splodge in the batik print. This was actually a great way to use up odd ends of green thread and there are about four or five different greens stitched into this layer.

I've worked more couched embroidery threads over the top of this layer, although made more of a feature of the couching stitches themselves by using two strands in a more contrasting shade of green to go over the mixed threads. If you're working couched threads over a fabric edge like this, a top tip is to bring your need up on the layer above (in this case the yellow/purple/green batik), over the thread and down into the layer you're edging, it keeps things much neater and avoids fraying. 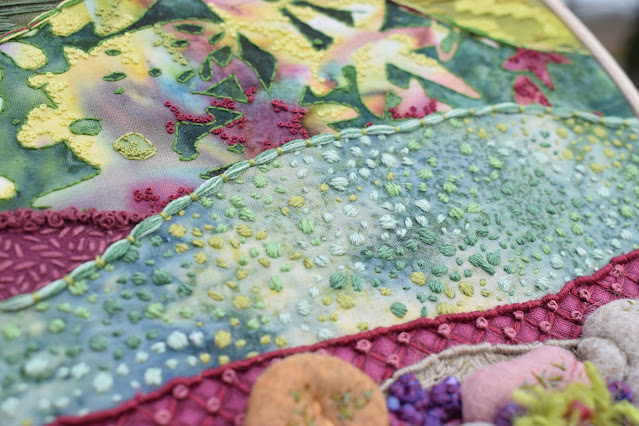 The bottom purple layer has a sort of fleur-de-lis/cross hatched/four petalled print thing going on and I've accentuated the crosses with straight stitches and added a two strand, three twist french knot at every point where the crosses meet. 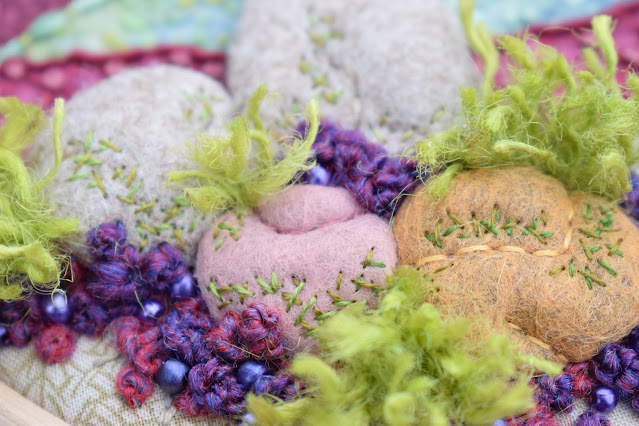 The rock area itself I think is stuffed full of textures and I'm really pleased with it. The felt rocks have had 'moss' added to them with odds and ends of green threads from the layers above and these are just overlapping seed stitches in various colours.

French knot heather flowers have been stitched around the base of the rocks to help bed them in, but this wasn't using embroidery thread. I risked losing my thumb again (pulling thick threads through tight weaves is a bit of an ordeal) and used Stylecraft Highland Heathers DK yarn in two colours. These yarns have amazing colours within them, almost a tweedy look, and may possibly have helped my subconscious to come up with this landscape theme as I picked them up as a freebie from work at the end of last year when we were allowed to go to work in an office. 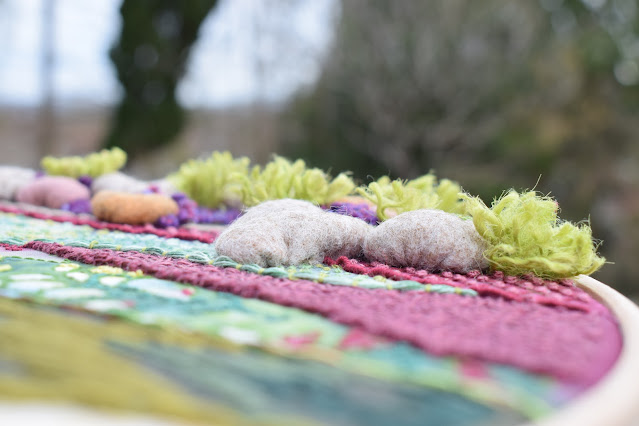 The yarn knots aren't particularly neat as I discovered that this yarn isn't quite as easy to use as the Stylecraft Special DK yarn, more often than not it has a paddy and unravels like wool roving would so I ended up developing a technique where I split the strands and then re-twisted the thinner strands to stop it coming apart mid stitch. Re-twisting it of course made it more prone to tangle so I really had to keep my hands on it keeping the loops apart. Worth it though I think!

I have discovered an absolute love of adding a bit of sparkle to nearly every Stitchscape and this one is no exception. The problem is that the Stitchscapes all end up looking a bit matte and you need something to lift the piece and add the light back in. I found in a draw a tube of assorted purple beads and used these quite big pearly beads to nestle within the yarn and help draw your eye. Amazingly they matched the yarn colours really well, although I only had two beads in the more pink shade which was a shame. 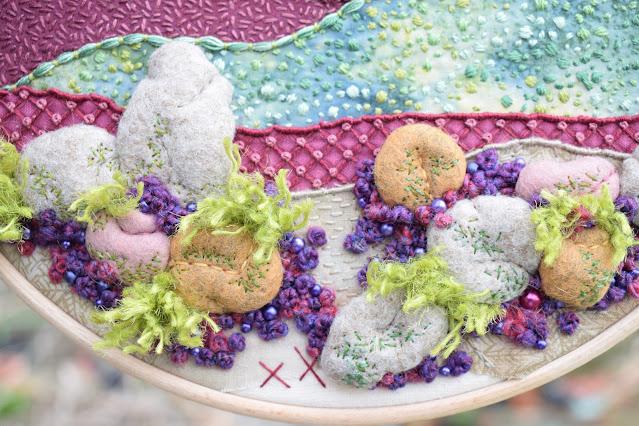 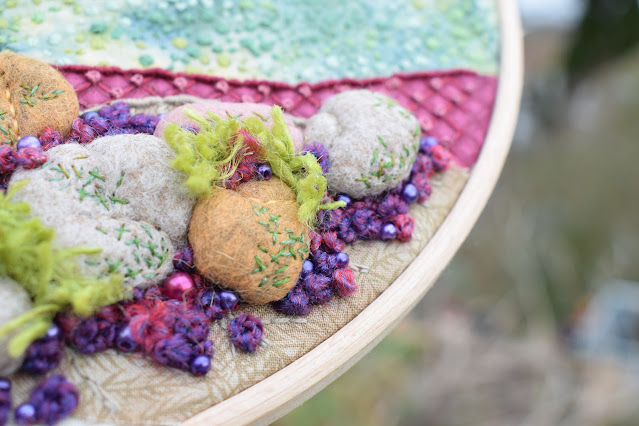 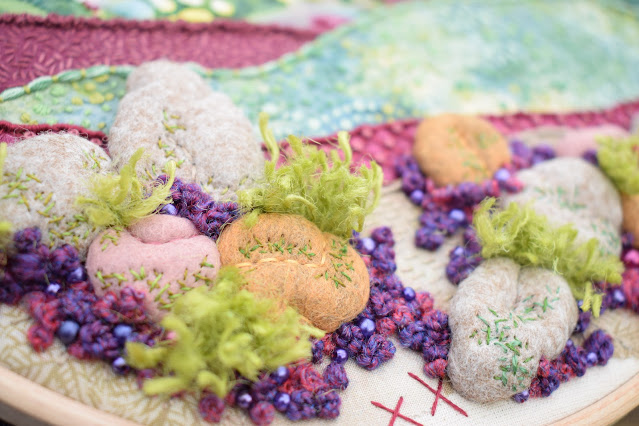 I'm really pleased with the end result, it absolutely reminds me of holidays spent on the moors watching the sunshine pass over the hills whilst having a picnic. At 22cm in diameter it's also one of the larger pieces I've done which I think was needed to balance the rocks at the bottom. I wonder how big I can make those rocks go though? 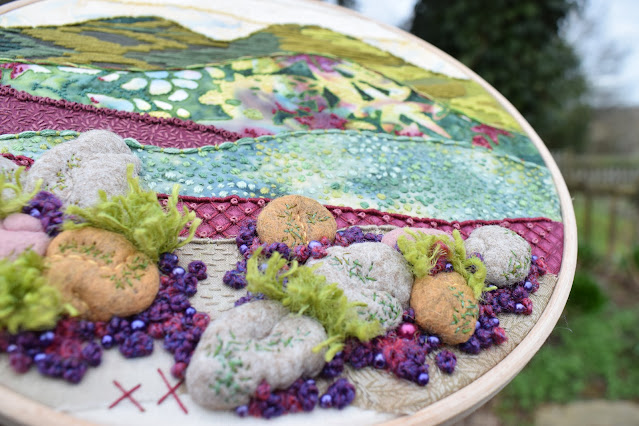 So, the final stitch run down is; bullion knots, satin stitch, back stitch, french knots, straight stitch, running stitch, long stitch, couching, seed stitch and beading. Not many stitches to create such a wonderfully textural piece! 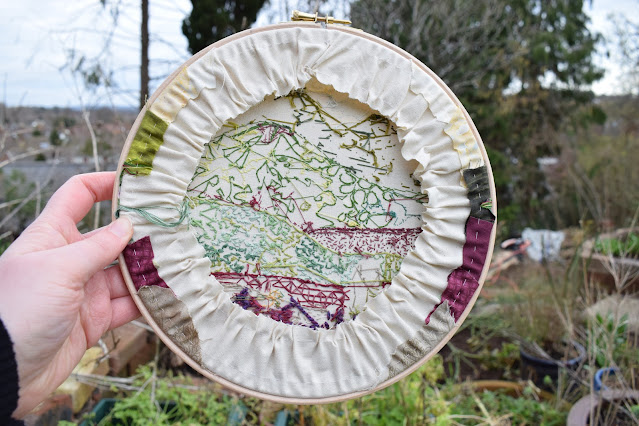