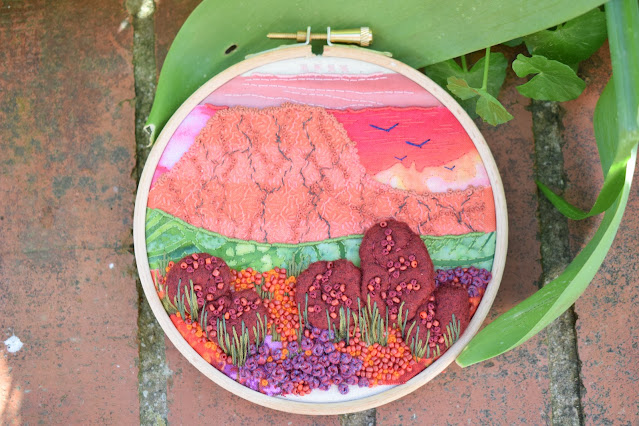 Fun Fact: "Arizona Glow" is actually the common name of the Thunbergia Alata flower, a reddish brown, five petalled vine flower which looks fantastic when all in a jumble with flowers everywhere.
Oddly, I discovered this flower by accident when trying to name this Stitchscape with one of my terribly cheesy names. I'm really fed up with using 'hill', 'mountain' or 'valley' etc in my titles, although most of them have some kind of hill in the actual landscape, and I was trying to come up with something a bit more original. The colours in this piece reminded me of the red rock you see in photos of Arizona and I happened to type in Arizona Glow into Google and came up with the delightful Arizona Glow flower! 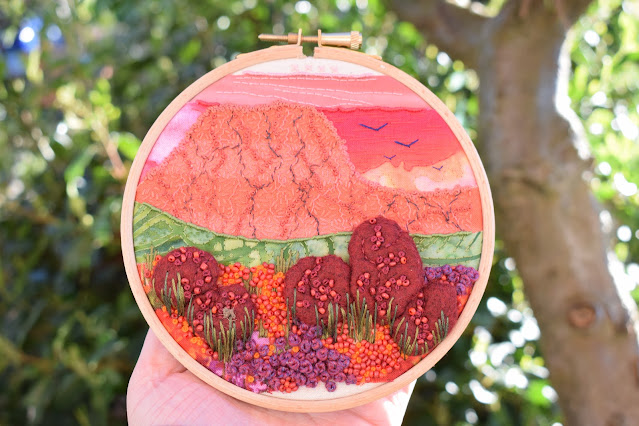 This piece is so vibrant my camera couldn't take the vividness of it all so I'm afraid you aren't really seeing the true colours. It's much darker to look at in person, the colours warmer and more saturated. It's a real POW piece!! 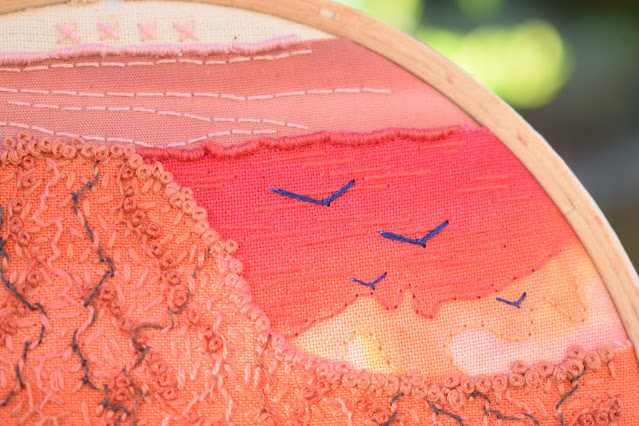 I hadn't actually intended for this Stitchscape to have rocks in the foreground, but I came across the most amazing assorted pack of 100% wool felt in all different colours a few weeks ago from Billow Fabrics and now I have a massive bundle of felt to use up!
Included in the pack was this gorgeous deep, dark red (like a real cherry kind of colour maybe?) which worked perfectly with the floral fabric at the bottom of the piece so I thought, why not? It really helps to weigh the piece down and actually I was a bit worried about what I was going to do to the bottom layer in terms of embroidery so this helped me out enormously. 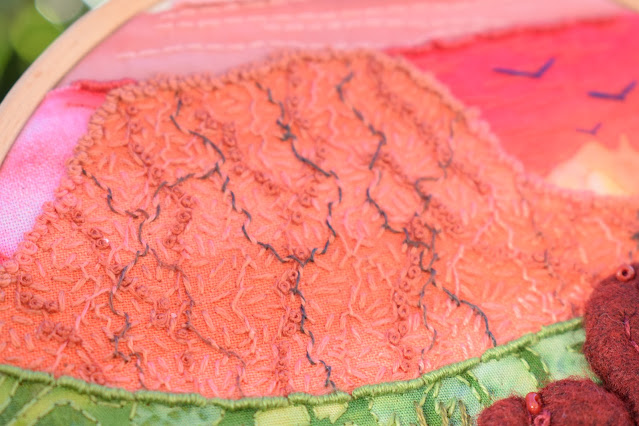 Starting at the top though I used a slightly stripy batik ombre fabric and used a single strand of pink thread to work back stitch along the vague stripes. This was then edged with bullion knots and some little crosses added to the calico at the top of the piece, all in the same pink colour.
The next sky layer down is a space dyed fabric I have which has the most amazing deep pinks and oranges in it to look like a sunset. I didn't want to cover this too much because I love the colours as they are so instead I've just added some single strand straight stitches horizontally across the upper part to hint at darker wisps of cloud blowing away from you. Where the colours dramatically change from pink to orange I have highlighted these by working a single strand of back stitch in pink and then orange to highlight edges of clouds. All very delicate and simple so far!
Birds were added in a dark navy by using a single strand and making wide, flat fly stitches. The smaller you make these the further they appear away so they are a lovely thing to add to skies to give it some perspective. 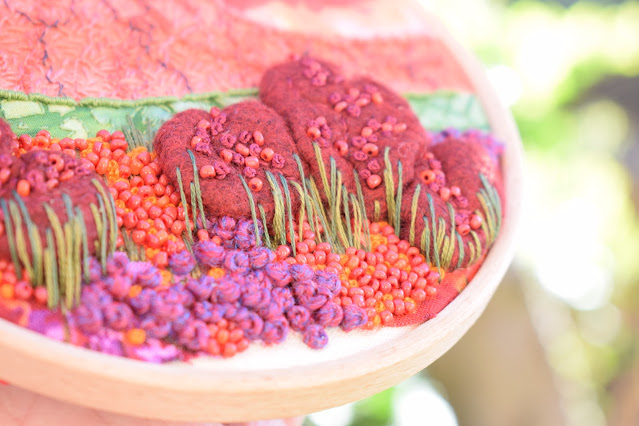 The big hill ended up being the biggest problem and I had to keep throwing techniques and stitches at it before I decided that I liked it. The fabric is a wide stripe in pink, you can just see the two pink tones under the seed stitch, and I made sure to cut it so that these stripes were horizontal to maybe look like ledges or clouds passing over (I wonder what it would have looked like with a vertical stripe?).
I worked seed stitch all over this fabric layer using two different colours and kept the colours to their specific stripe but then it looked too stripy... if you know what I mean? To combat the stripes I used single strands of each of the colours to work vertical whip stitch over the seed stitches to try and blend the layers, and then french knots around the fabric edge, again keeping the knots in the same two colours when it changed stripe layer.
For a while I left it like this, thinking it was done, but it was nagging and nagging at me. It was just too pink, too bland and there was no contrast or interest in it. I hope that by going over and adding yet more vertical whip stitch in a variegated brown/dark purple thread I've managed to pull that back a bit. I've also worked little french knots in the darker pink colour along some of these whip stitch lines which add lines of a different width and depth. 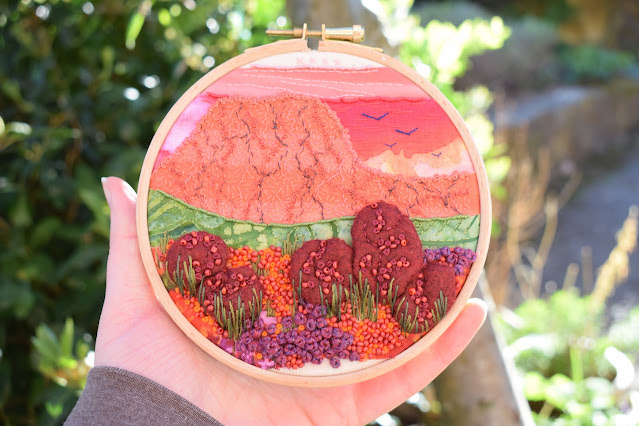 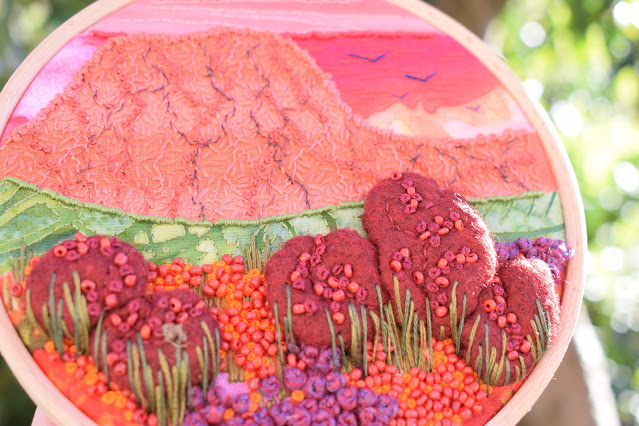 The green layer was a nice easy section to do with a single strand of back stitch along every shape outline. I think it really lifts this piece because otherwise it would be so boring and pink but the green helps to break it up and adds a lovely contrasting colour to keep you interested. 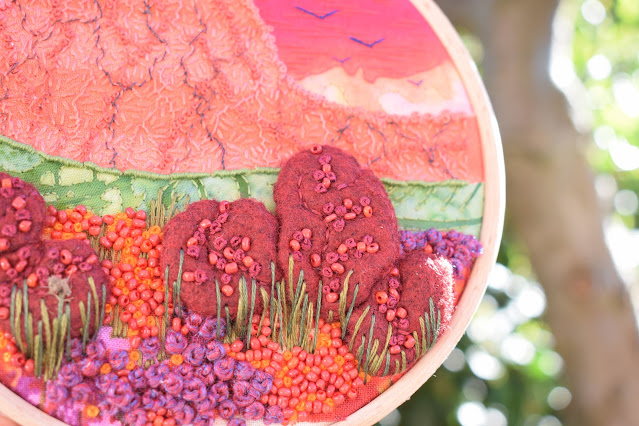 The bottom layer I got completely and utterly carried away on! On the rocks themselves, which were made in the same way as the felt rocks in my Rockscapes, I have added a mixed colour of matte red beads and french knots which kind of creep along the crevices I created when stitching the rocks down and adding texture with the little lines of back stitch.
The fabric all of this is covering looks fairly similar to what I've ended up with on the front actually, a mass of orange and red and purple with some sticks of green sticking out of it. I wanted to help bed the rocks into the landscape so I went over any green stems that were in the fabric print and added those in with straight stitches in two or three different green colours and then carried on these stems off the fabric and through the rocks so that they are more three-dimensional as well.
For the purple flowers I used two strands of Stylecraft Highland Heathers acrylic yarn which has a mottled effect to it, that worked perfectly with the two colours of purple in the print, making chunky french knots which have been layered on top of each other to create a jumble.
Around these I worked orange french knots in normal stranded Anchor thread over the patches of orange and more of the mixed red beads in all of the red areas. 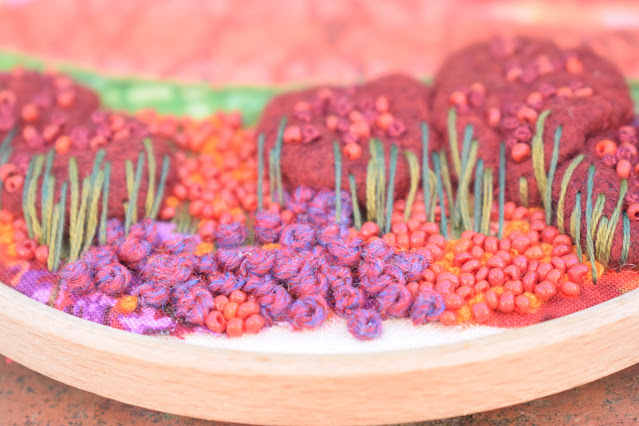 The texture of this combination is wild and amazing. The acrylic yarn is matte and fluffy, the orange is neat and tidy and the beads are slightly shiny so they reflect and twinkle at you. Combined with the slight fluffiness of the felt it's a party for your fingertips and a feast for your eyes!! 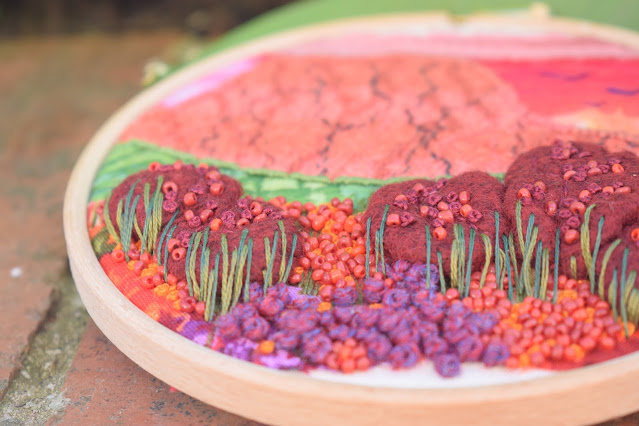 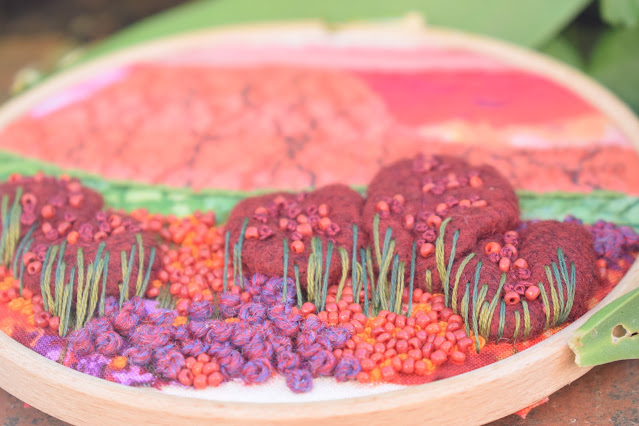 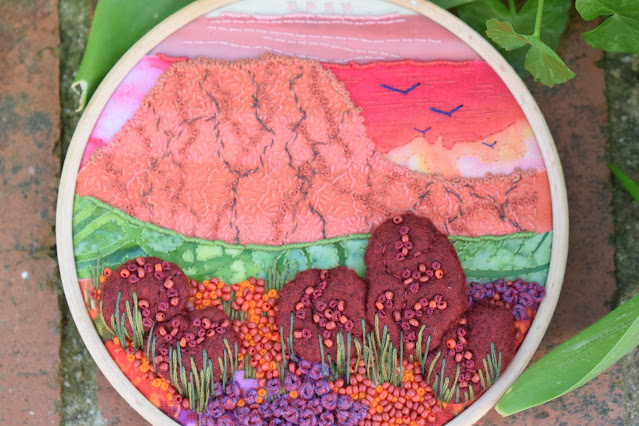 There has been a lot of back stitch used in this piece. I hadn't really thought about it until now when I'm typing through what has happened on every layer, I don't think you notice it specifically though as it's just something that adds to the texture and overall image.
The full stitch run down for this piece is; straight stitch, bullion knots, back stitch, fly stitch, french knots, seed stitch, vertical whip stitch and beading. Possibly one of the shortest lists I've done! 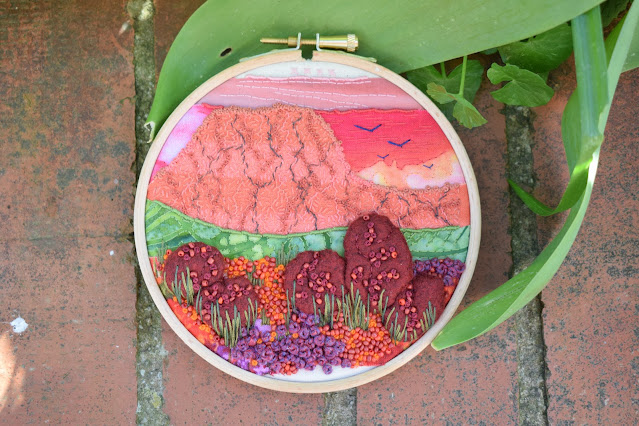 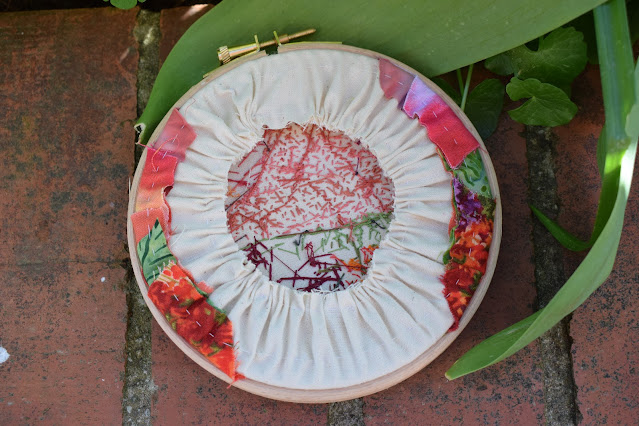