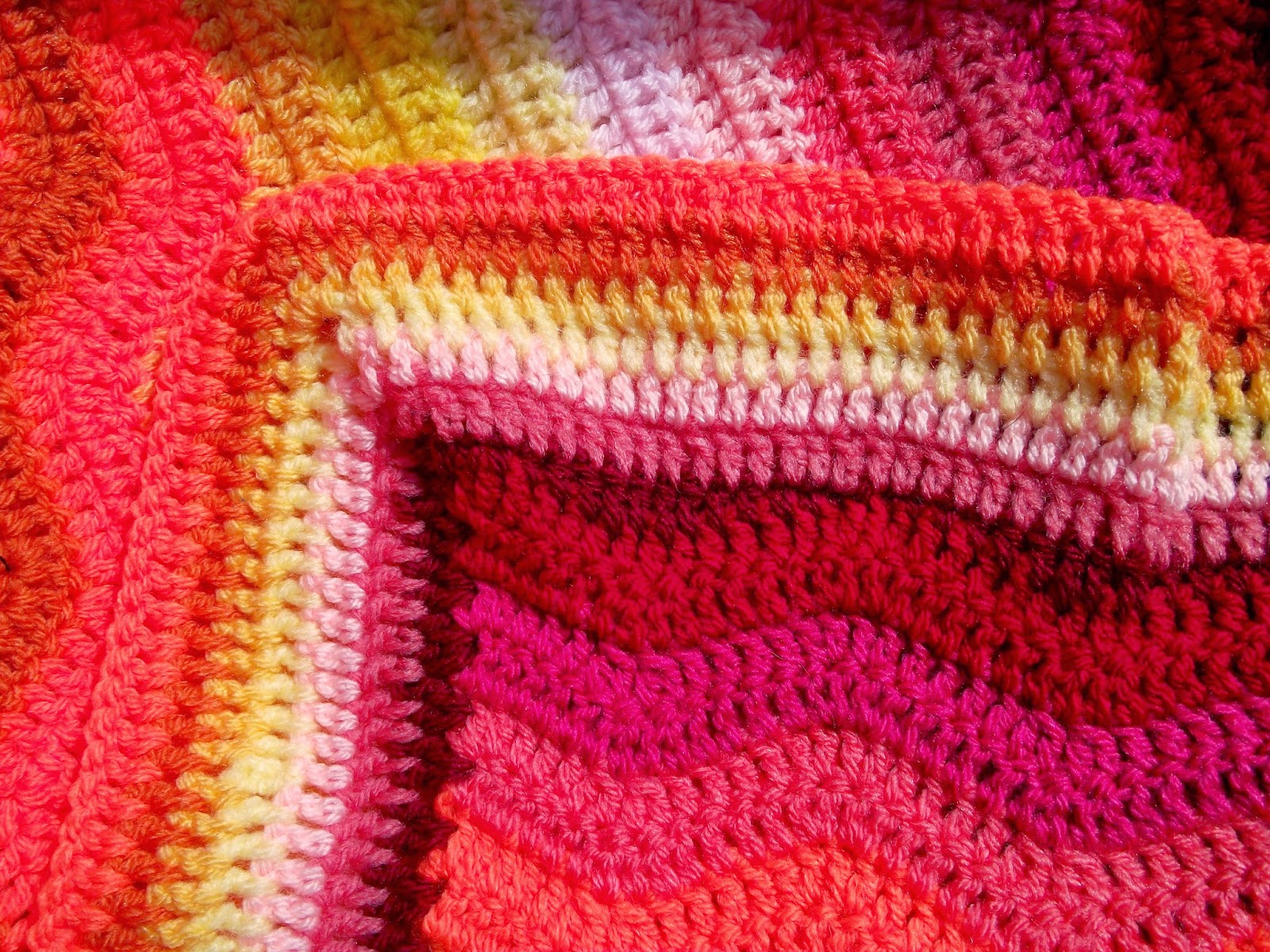 Woooo!!! I have finally finished it!! The Sister's Sunset Ripple Blanket is now done and dusted and I can down crochet hook and wool for a while. I have felt a bit pressured to make this blanket, it wasn't a nice relaxing ripple journey as I had a deadline and knew that I had to keep going even when I didn't want to. 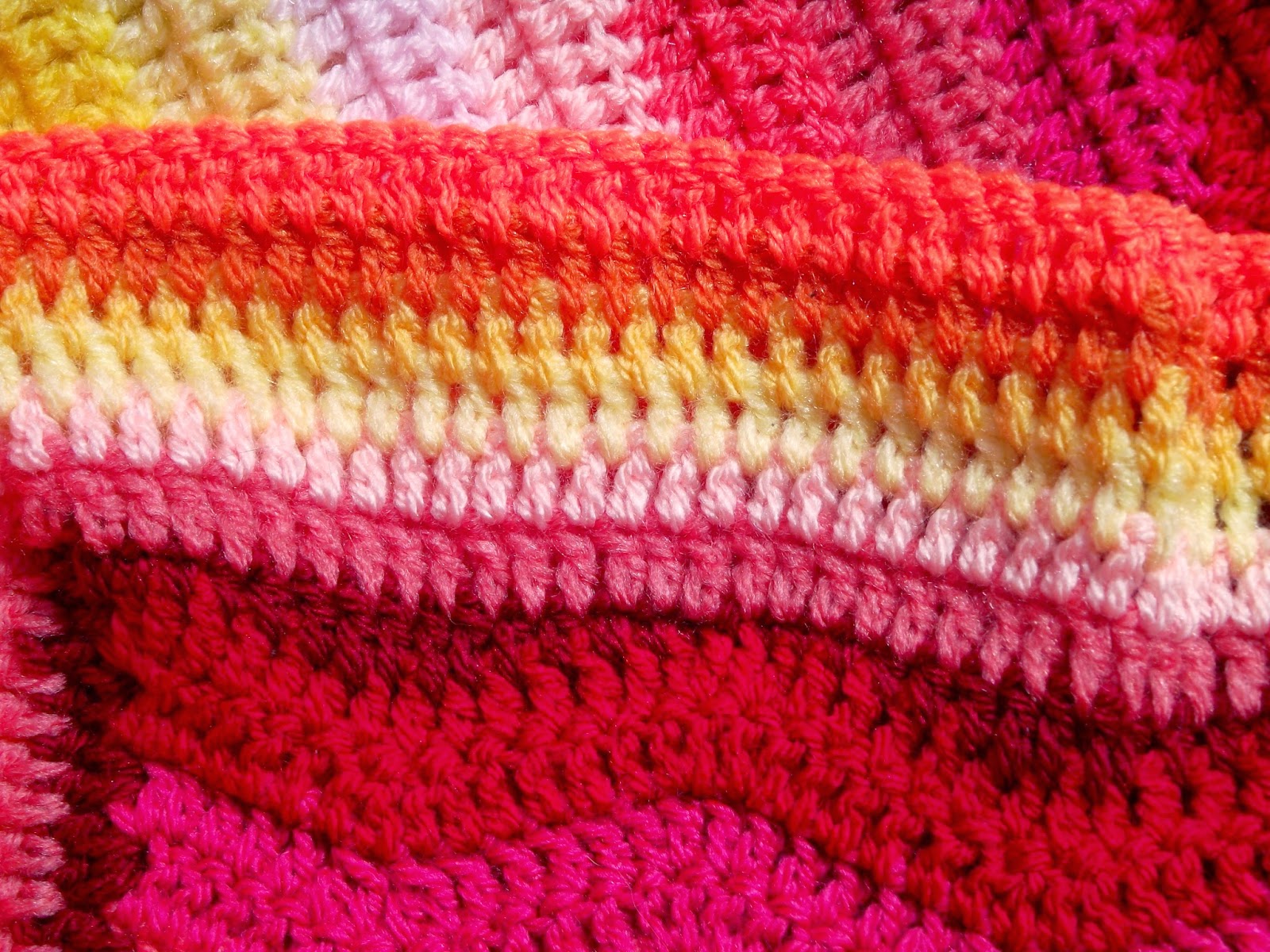 Of course, if you have been following this blanket's story then you will know that this is the second attempt, and I actually started this version at the beginning of August, working on it since then for days at a time with the box set of Midsomer Murders to keep me going. Less than a month to create a blanket is pretty impressive in my opinion though so I am quite chuffed about that. 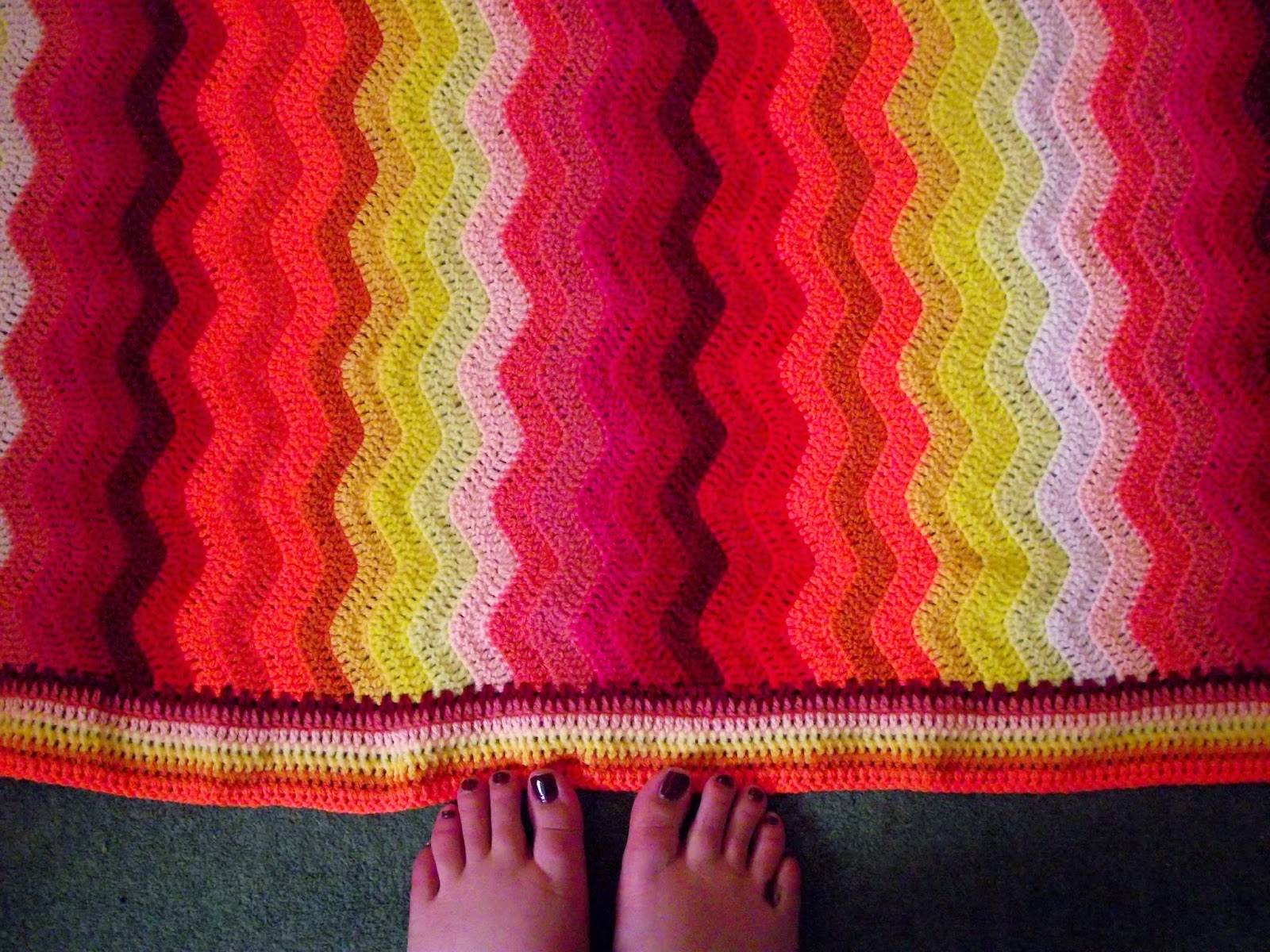 In comparison to some of my other blankets this is one of the smaller ones, but is still big enough to snuggle under and get cosy. 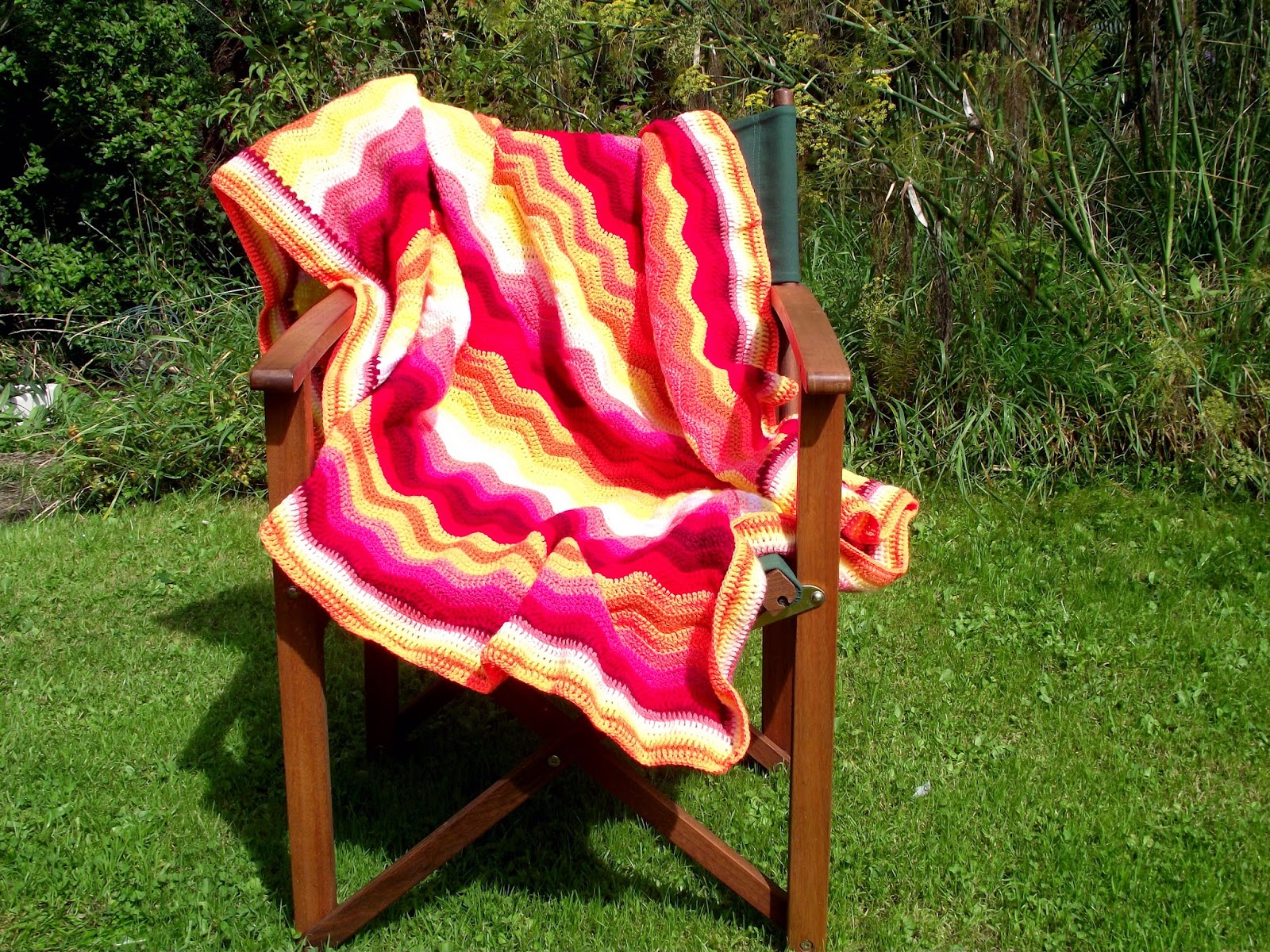 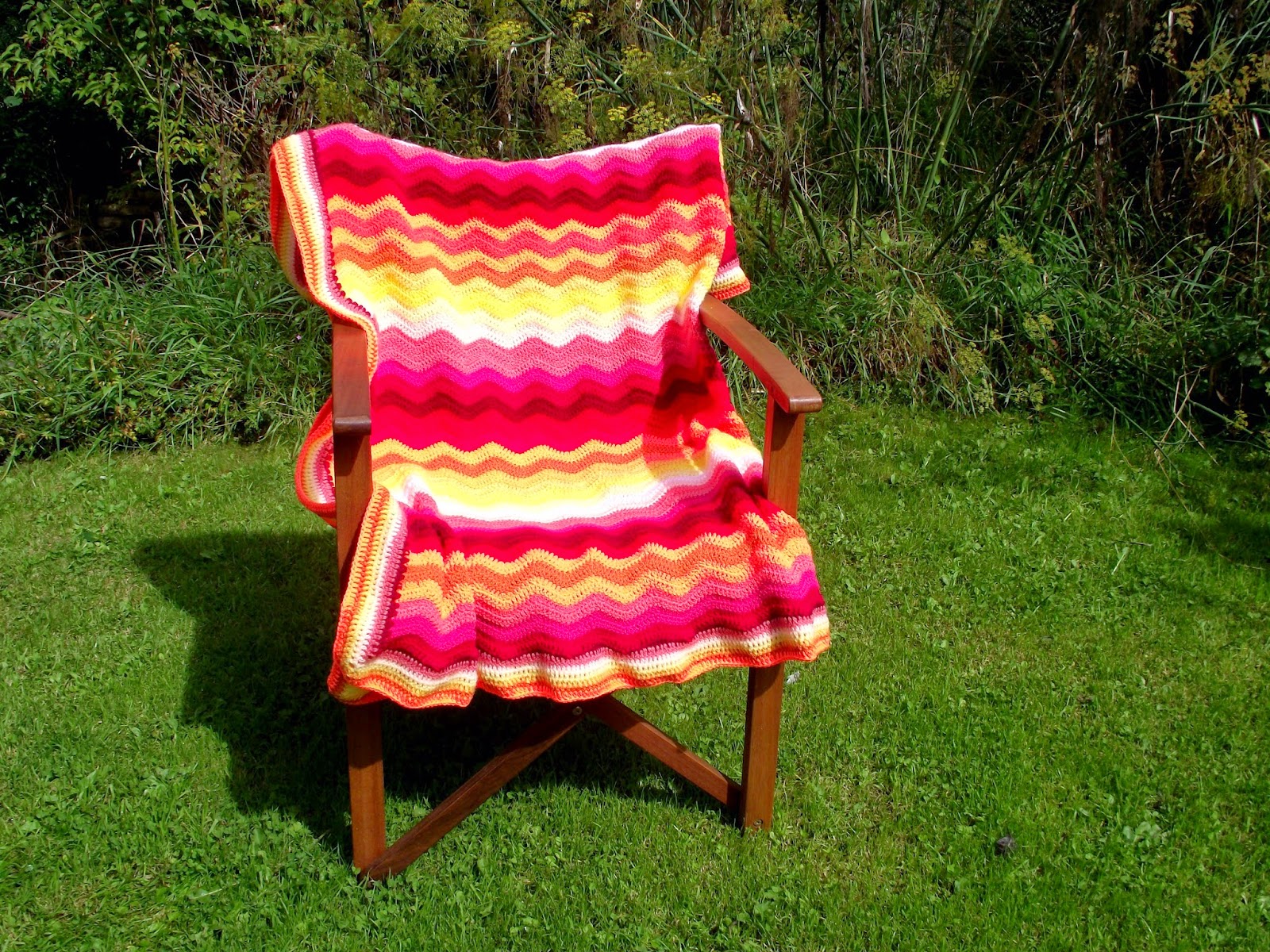 So would you like to see it all spread out? Are you ready for the final reveal? 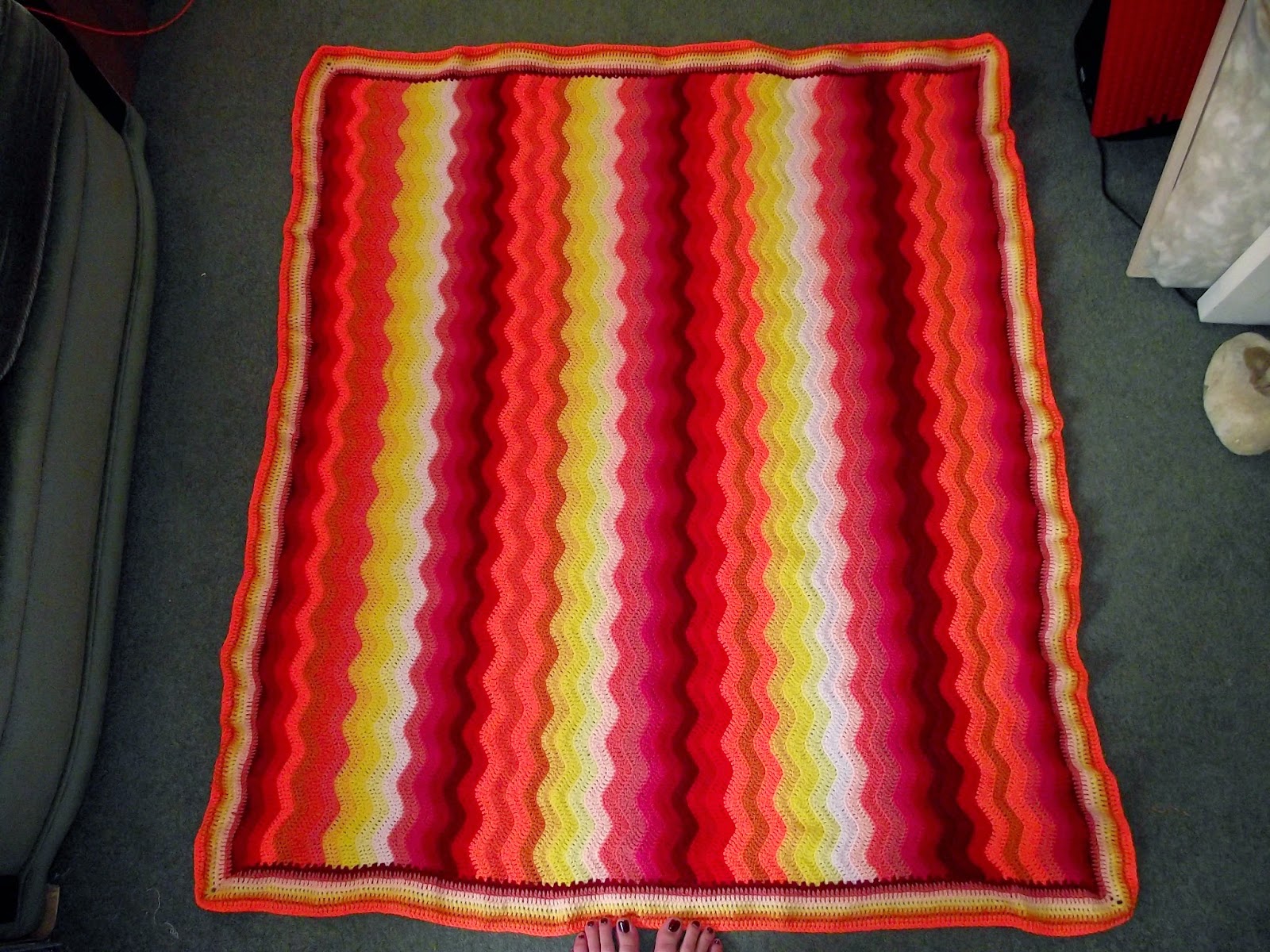 If I remember correctly there are 53 rows of colour, so that is 106 rows in total. I have no idea how wide the blanket is in terms of stitches, I tend to be quite organic about the length and just keep chain stitching to start until it looks about right.
This is the first ripple blanket that I have edged, which is quite exciting (I may have to go back to my other ones and add an edge on those too!). Attic24 has just published a ripple edging tutorial which I looked at because I used her ripple blanket pattern, but I have done mine slightly different to hers. Instead of working out of the loops at the top of stitches, I worked in the gaps between the treble stitches, adapting her pattern for the section where you straighten off the ripple. It does mean that you get a kind of frill at the edge of your blanket as you add back in extra stitches but I quite like that.

(For the Attic24 pattern only.) I worked backwards from the centre point at the top of the ripple, between the two lots of double trebles. In this gap I worked a Slip Stitch, from here on you just repeat the following pattern: 3dc, 2htr, 5tr, 2htr, 3dc, ss. The Slip Stitches should always be between the two sets of double trebles, and remember, these are worked between the stitches not in the loops at the top. Hope that makes sense, do send me a message if you need any more help.

The sides of the blanket are the same as Attic24's, two trs in each stitch to create a little 'v'. For the next few rounds, I just worked treble stitches between the previous stitches (again, not through the loops at the top), alternating the direction for each round to create a nice flat border. 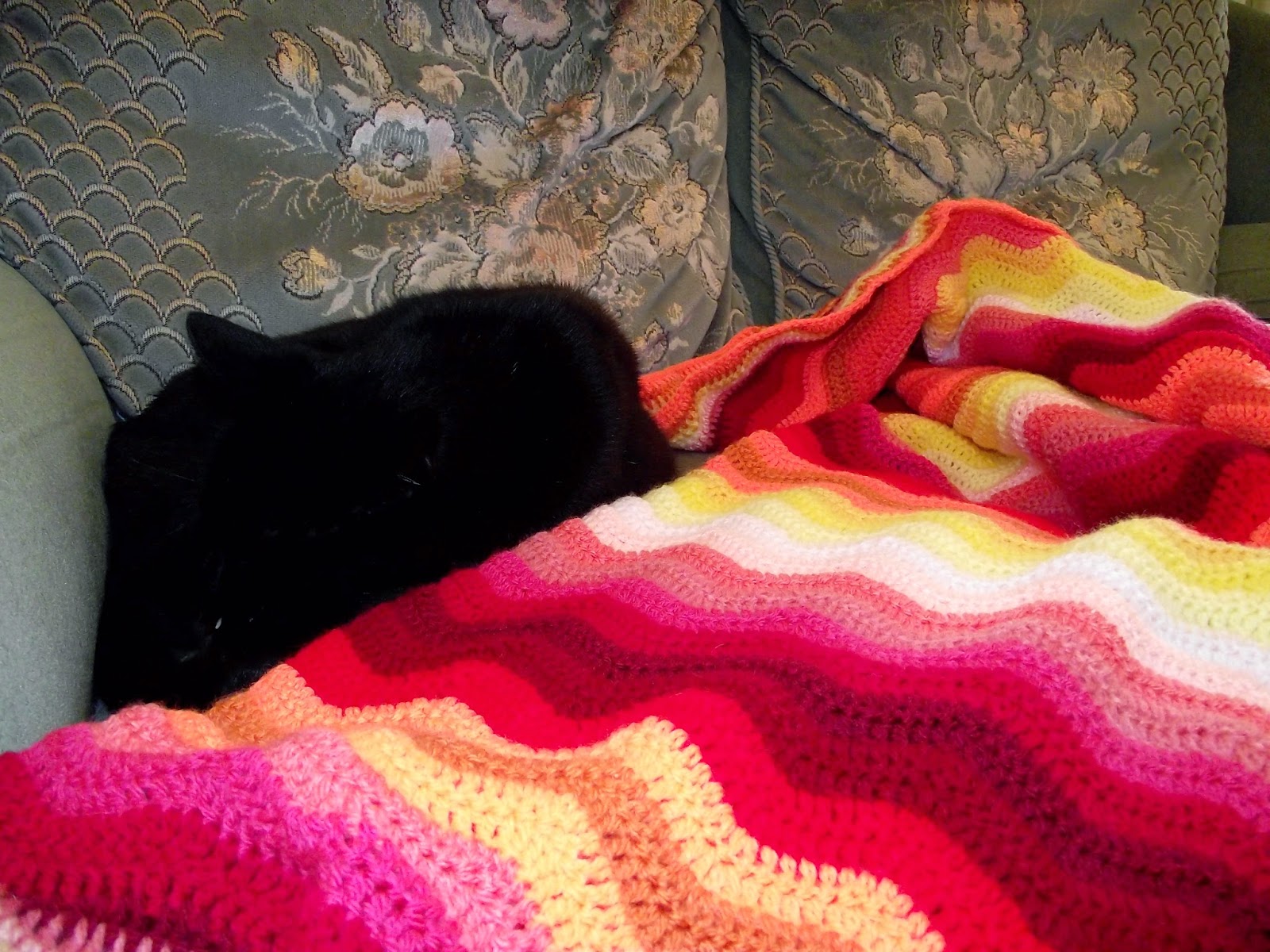 Email ThisBlogThis!Share to TwitterShare to FacebookShare to Pinterest
Labels: Crochet