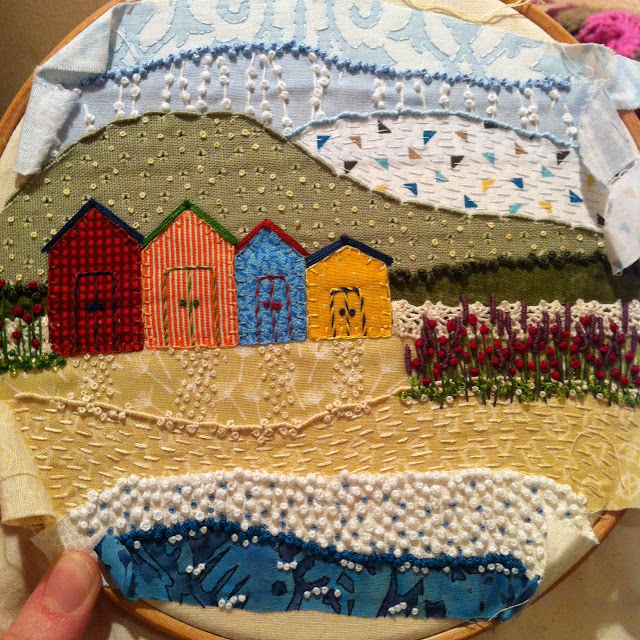 Before Christmas I was contacted by an old university friend who has been following my explorations into the land of stitchscapes on my social media pages. She had apparently been showing my work to her family and her Mum had expressed an interest in my work, so a special Christmas present plan was drawn up and I was asked to do a commission especially for her. The brief was a little bit different from my usual themes and contained four words; seaside, beach huts (counts as one word), poppies and lavender. It posed an interesting challenge but I love being given briefs- especially when they work out well! 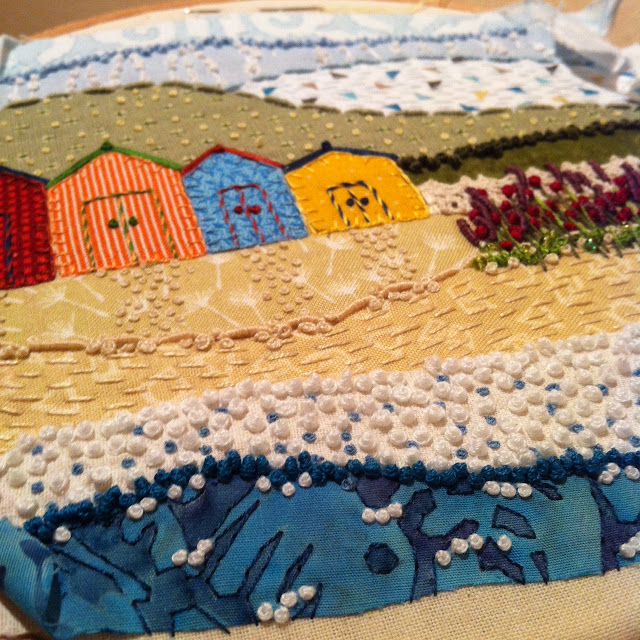 Originally there was no blue at the bottom, the sand just faded into the crashing sea horses, but I like to send those who have commissioned me progress photos to make sure I'm on the right track and the sea was added in later as a further request. 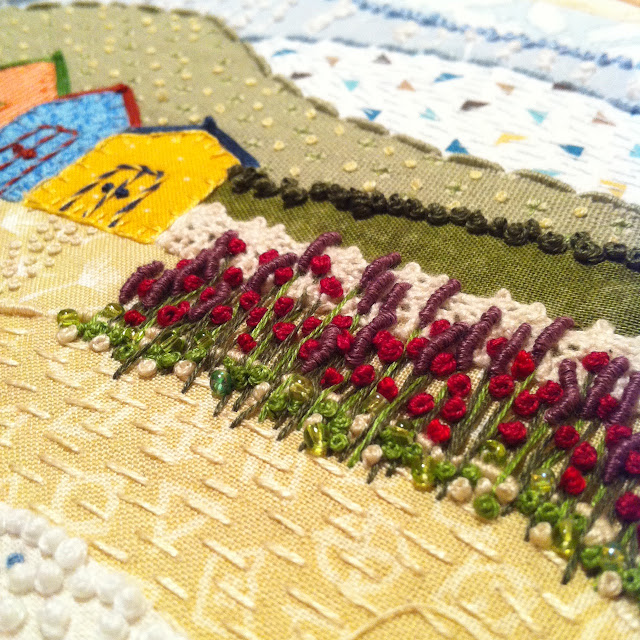 It's quite a simple stitchscape but I don't think it would have worked if I had made it any busier. There aren't very many hills in the distance but that brings focus to the little beach huts which were stitched in first with blanket stitch to keep the edges neat. The roofs are simple lines of straight stitch worked closely together and embellished with a french knot at the top, and the doors are a two-colour whip stitch combining the roof and side stitch colours. I think my personal favourite part of this 'scape are the little tiny lines of french knots leading from the doors to the sea. 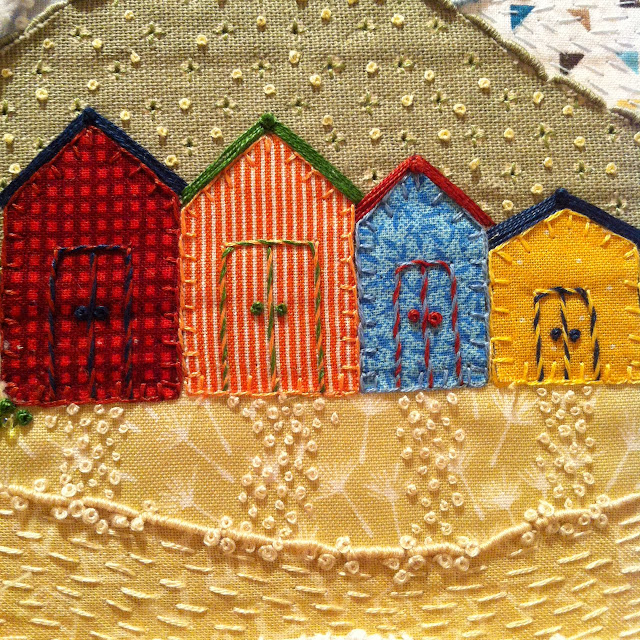 The lavender and poppies were worked into a mildly un-beach-like flower bed on the sand, but it helps to balance out the colour of the beach huts and adds a really lovely texture as I have also sneaked in some tiny green beads. These pieces are all about texture really with the knots and raised stitches. I am starting to add in more beading and strips of ribbons, or in this case, lace. just to see where I can take it further. 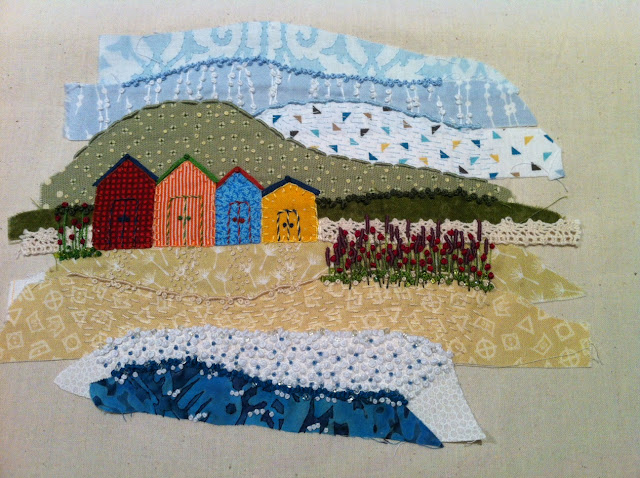 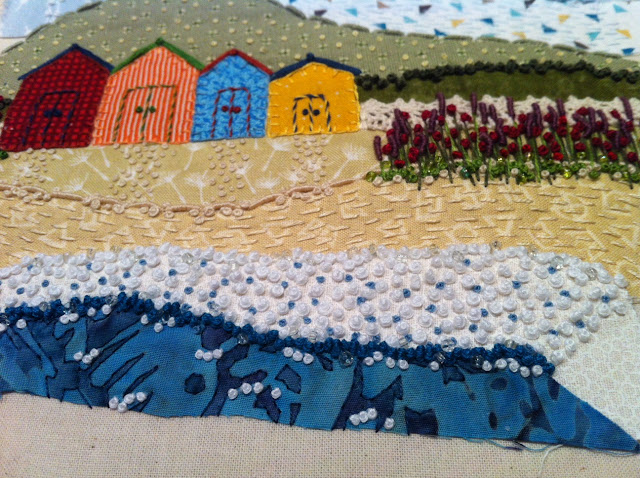 Once full approval was granted, I framed the little seaside scene in a lovely box frame and posted it off, fingers crossed that the new owners would love it when it was opened on Christmas Day. Apparently it went down well and I have received good reports back  so I am very happy. I might have to play with beach huts some more!! 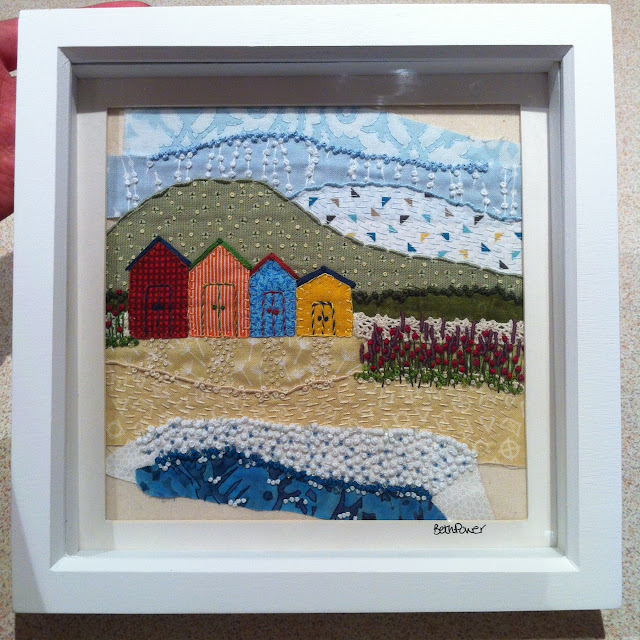