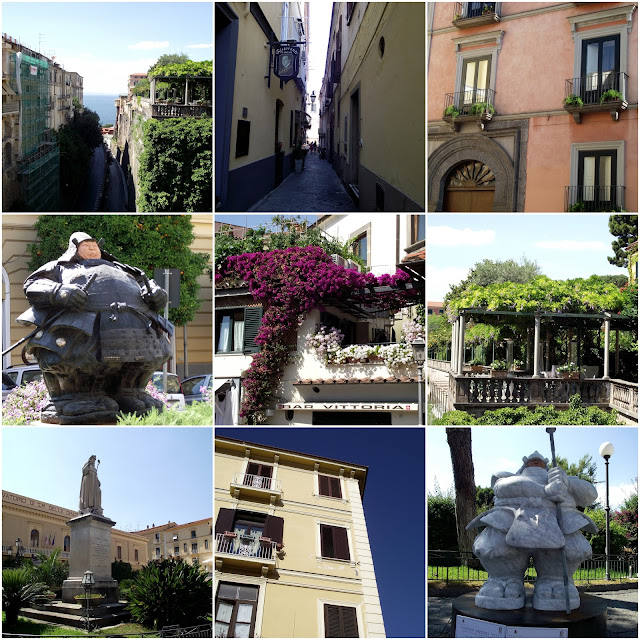 Hello! I am back!! Did you miss me?
I've had such a lovely time in beautiful Sorrento which is on the South/West side of Italy, built into the cliffs and almost directly opposite Mount Vesuvius making for a fabulous view! It was only a short getaway but I managed to take over 600 photos, as there is something beautiful to be found on every corner, and it's proving difficult to narrow them down to concise snapshots to show you on here.

We flew in to Naples airport on Sunday and took a handy coach which travels around the coastal towns directly to Sorrento train station- just a stones throw from our hotel. After a quick unpack we were straight out again to begin exploring the town. There is a main square called Piazza Tasso which has a hilarious roundabout that seems to be a complete free-for-all with cars, taxis, pedestrians, mo-peds, horses and anybody else who fancies a go competing for space! Off this square are lots of narrow, shop lined streets leading out into other squares, some full of restaurants and others more decorative, tree-lined sitting spaces. If you walk downwards you end up right on the cliff edge looking out over the Bay of Naples with breath-taking views of the harbour, the sea and distant islands and towns.

There are two ways to get down to the bottom of the cliffs from this point. You can either get a lift down for the small fee of one euro, or there is a zig-zaggy pathway leading down to the wooden jettys used for sunbathing and water side cafes. If you wander along the pathway you reach the harbour where you can hire private boats to take you around the islands, or catch ferries to various destinations. The water is so clear and so blue! We didn't see any fish or water life but then it was quite busy with traffic and tourists so perhaps they stay well clear from the water volley ball games and learner boat drivers. 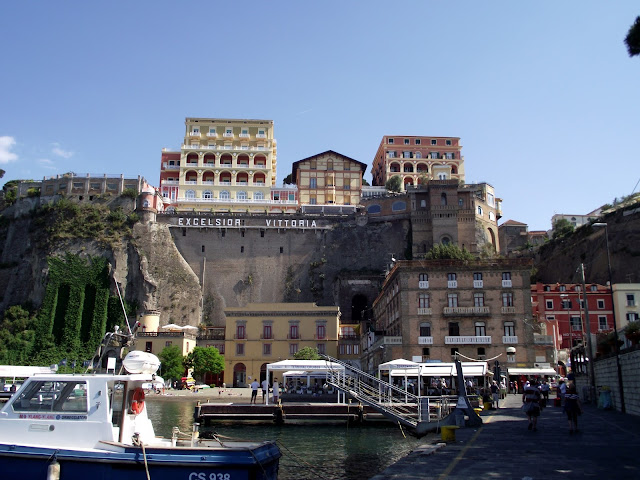 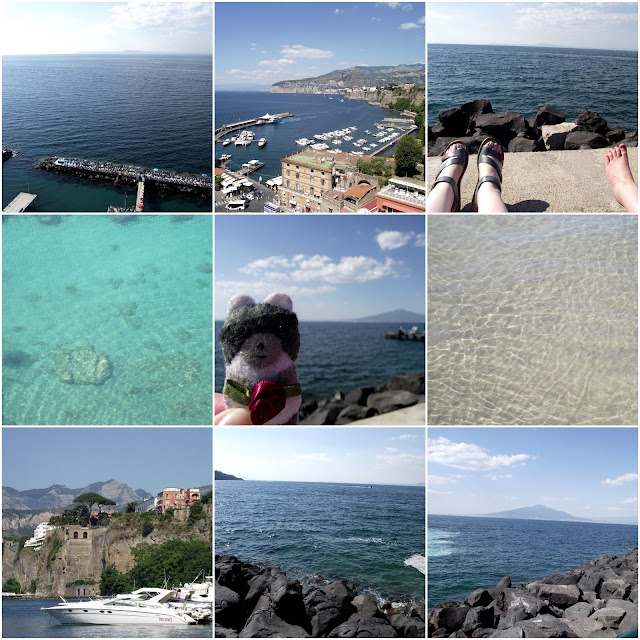 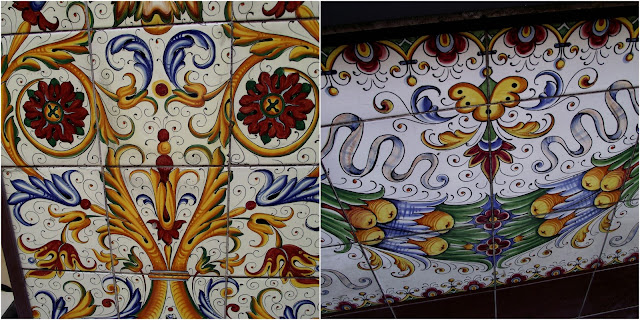 Having sat in the sunshine for a while soaking up the salty sea tang and feeling any strains and stresses melting away, we decided to wander back to the hotel to freshen up for dinner. Through the middle of Sorrento is a gorge (or, The Valley of Mills) which we had to pass over every time we went back to our hotel. Apparently it has its own micro climate down there, and is a special breeding place for the Harts Tongue Fern.
The title, 'Valley of Mills' comes from, funnily enough, the existence of a mill which was used for grinding wheat from the beginning of the '900s Attached to this was a sawmill which furnished the Sorrentine cabinet makers with chaff, and there was also a public wash-house which was used by the women of the community. After Piazza Tasso was built (just above the gorge and behind my point of view in the photo), the mill became very isolated from the sea which sparked a rise in the humidity, making the gorge unbearably hot and subsequently abandoned by people- creating an oasis of calm for the vegetation and wildlife that now thrive there. 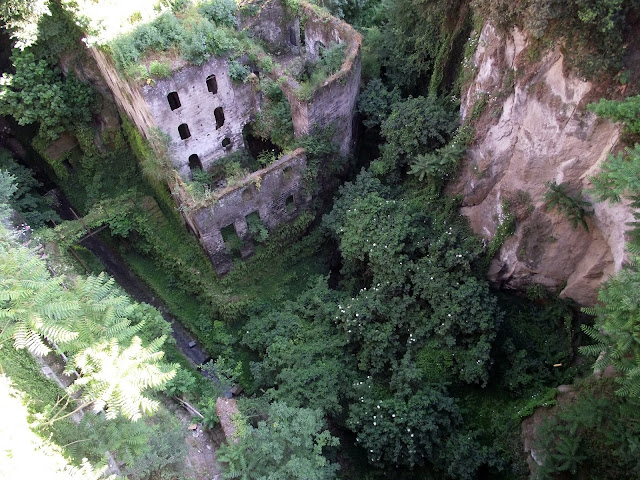 After dinner, which involved a lot of " lovely ladies, we have a lovely table just for you", we wandered once more to the cliff edge, and found ourselves in a perfect position for an awe-inspiring sunset! The Bay turned a lovely purple colour as the sun set behind the island of Capri, and M. Vesuvius took on an almost dreamlike persona, not looking nearly as threatening. It was a beautiful end to our first day in Italy. 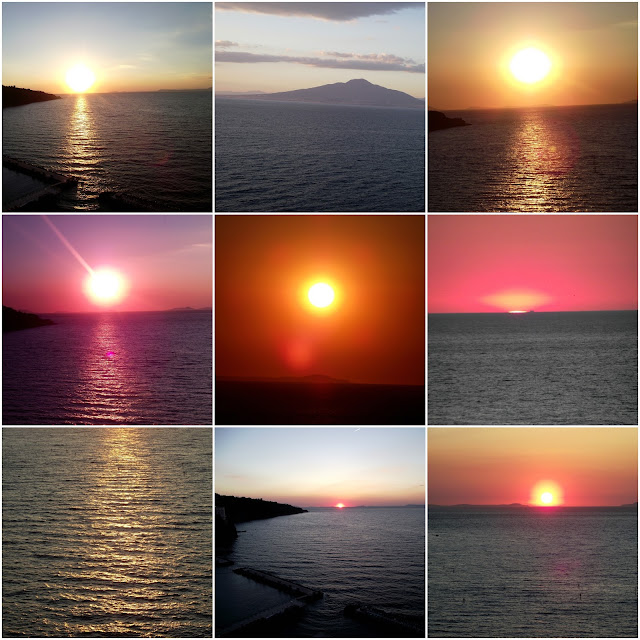 There are lots of adverts and tourist offices all promoting a day trip to Capri which is famed for it's Blue Grotto- a large water filled cave which you can sail a boat into, that is lit by sunlight in such a way that it makes the water glow an eerie electric blue colour. There are other coloured grottos you can visit, along with the Faraglioni- three spurs of rock sticking out from the island (a little bit like the Needles on the Isle of Wight), one of which has an archway through the middle of it. Unfortunately for us, all of these natural beauties are quite expensive to visit as you can only visit them from the sea and have to pay quite a large sum for the boat and then the entrance fees on top. 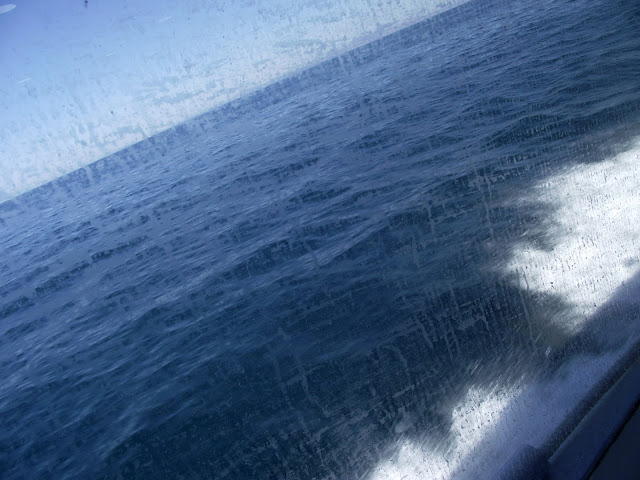 Instead we decided to take the regular ferry over to the Island and wander around the town to see what we could find. It was quite exciting watching the town draw nearer, although it is further away than you think and takes a good twenty minutes to travel across the water to the island. 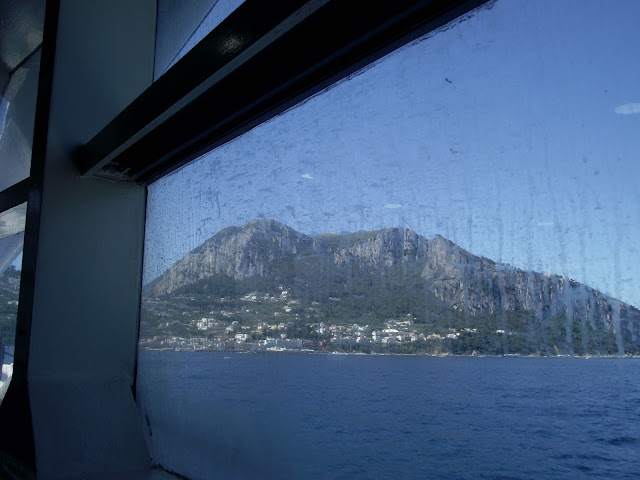 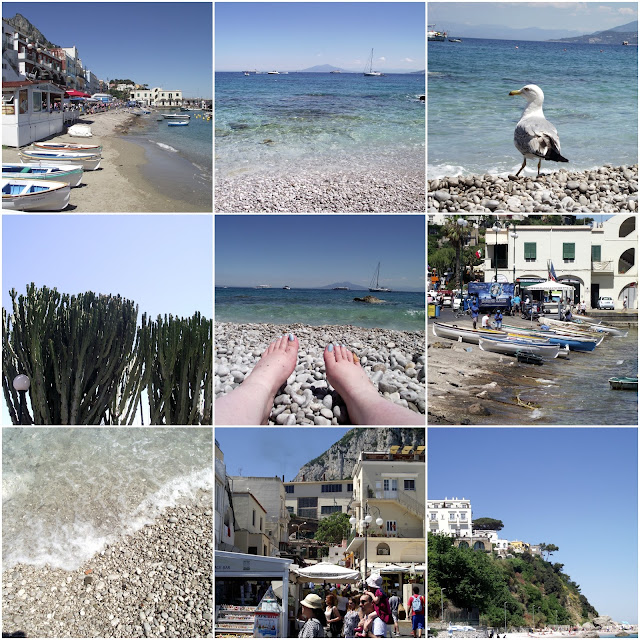 The first thing we did was to wander along the shoreline until we reached a white pebble beach where we could kick our shoes off and paddle in the clear waters. Those white pebbles got really hot- you could probably cook eggs on them if you so wished. The heat did come in handy as I was splashed by a larger than usual wave and had to sit down to dry off, and the feeling of being slowly cooked was a great excuse (if we needed one) for gelato! 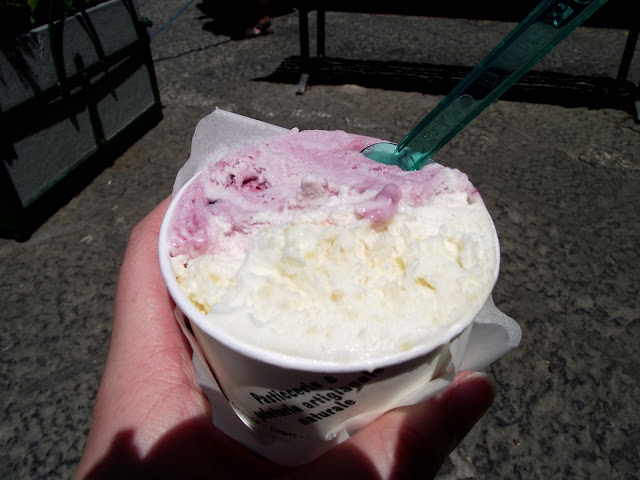 Did you know that Capri is famed for its bells? Not the large church kind, but little lucky bells which have originated from the ancient legend of St. Michael's Capri Bell. Once upon a time, a shepherd lived in a ramshackle hut on Anacapri with his mother and a sheep. One day at sunset, he was picking flowers whilst the sheep grazed, until he suddenly realised that the sheep had disappeared. Hearing the sound of the bell that the sheep had around its neck in the distance, he followed the noise until he arrived by a ravine where a shining light stopped him in his tracks. From the golden light St. Michael appeared atop a white horse. "My child" he said, removing a bell from around his neck, " take this and follow it's sound, it will save you from any danger and bring you good fortune." The shepherd wrapped the bell in a green four leaf clover and took it back home to his mother, and from that moment on his life was full of joy and happiness, and every wish came true. Since then the bell has been reproduced as a little charm, becoming the symbol of good luck and success.

The legend doesn't seem to mention whether the shepherd found his little lost sheep, but you can buy every shape of bell you can think of from the various bell shops on the island; ones moulded into little characters or painted in bright colours. 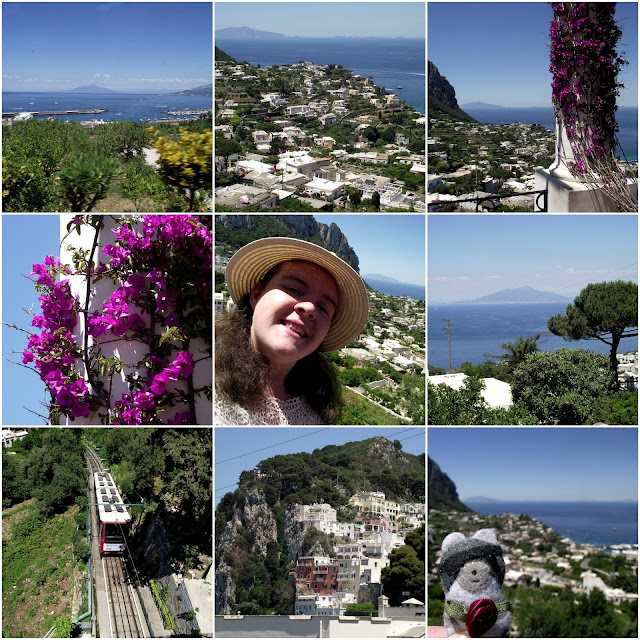 Having wandered around the lower part of Capri, we took the funicular railway up to the centre of the town, which features a square known as La Piazetta, or the 'drawing room of the world' as it is made up of four large restaurants where people go to sit and meet for hours! It was certainly very busy when we walked through. The views from up there were incredible! The town is kind of nestled between two juts of rock at either end of the island, the gleaming white houses and little narrow streets look beautiful in contrast to the great geological features and blue sea. 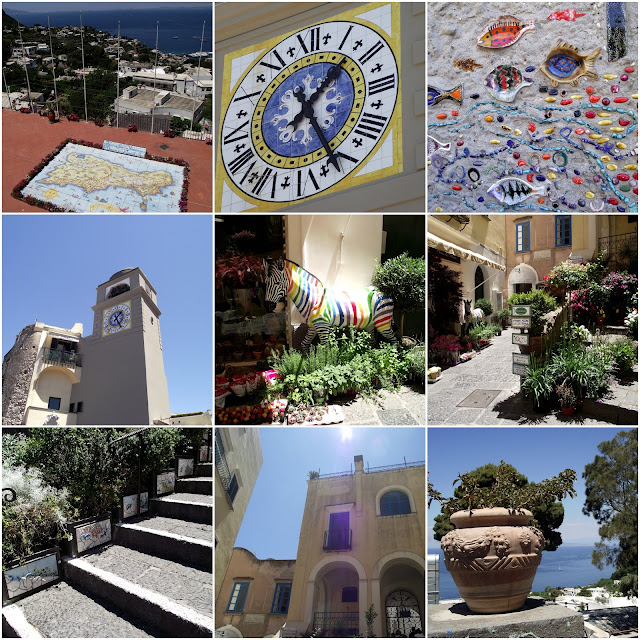 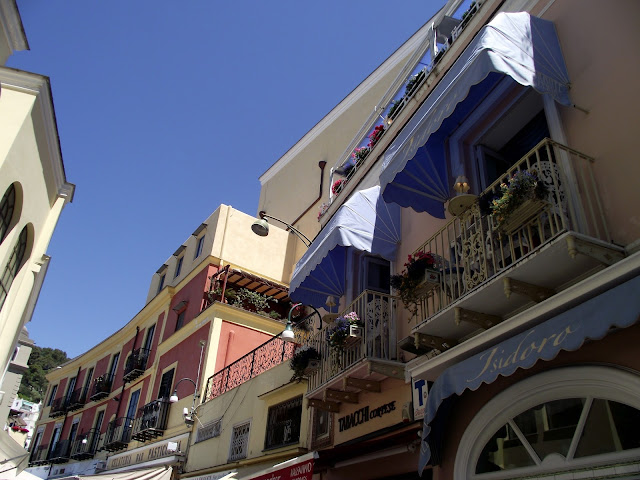 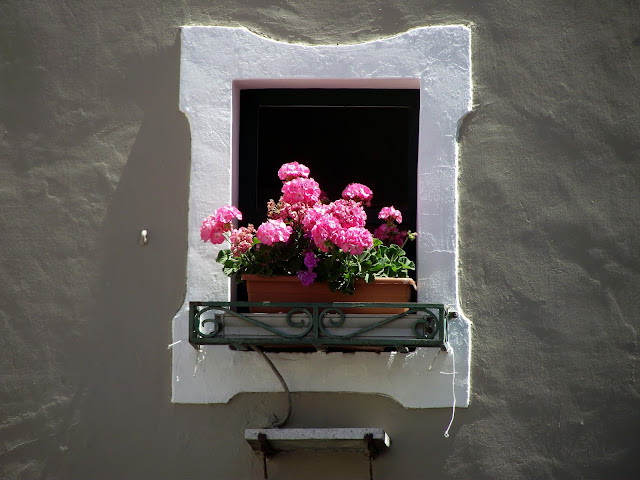 It's not really an area to visit if you have a disability or difficulty walking- there are steps and steep walkways all over the place, although there are lots of taxis to show you the best spots. One of the best parts of the day was trying a Limoncello Spritz- fresh lemon juice, ice, limoncello and prosecco all mixed together. Oh it was to die for! 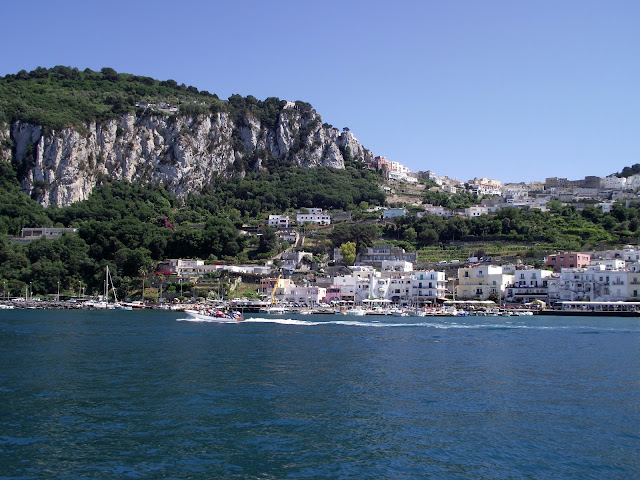 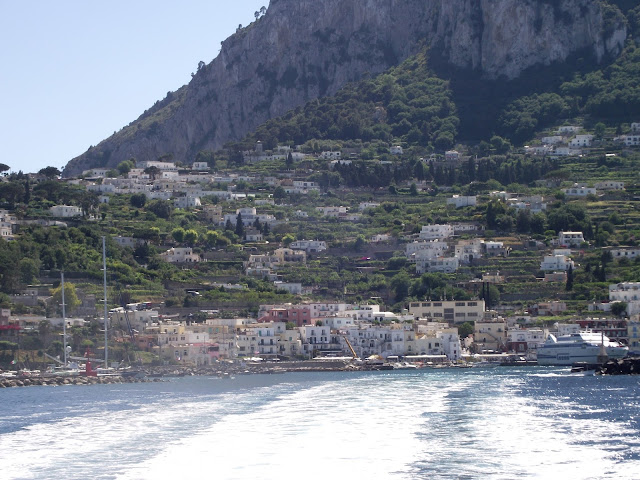 We waved goodbye to Capri several hours later and watched it fade into the distance as the ferry whisked us away back to Sorrento. After a quick freshening up at our hotel we were back out again for a very exciting ride on the Dotto train! It was a little hair raising at times as the streets are very twisty, the driver was very confident, and the buses coming the other way very large in comparison! But we'd timed it well by hopping on whilst the sun was setting as we were driven past (at warp speed) various other view points along the coast, looking at the hotels perched atop the cliffs, glowing golden in the sunlight- much like St. Michael. 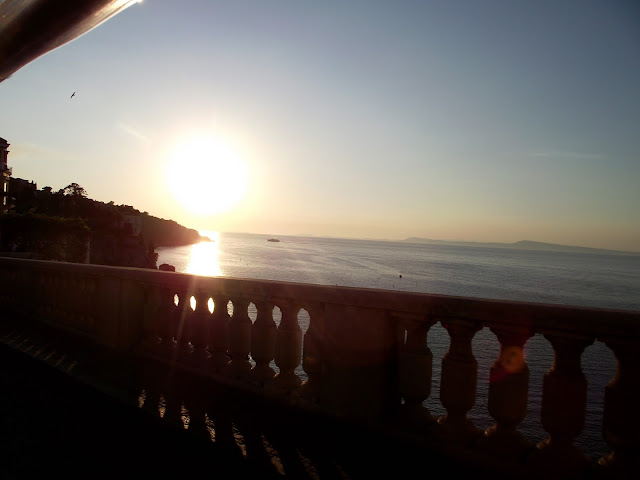 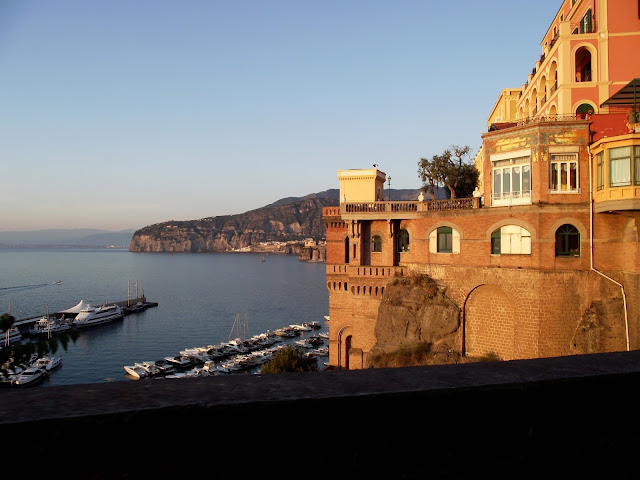 Our dinner that night, at the Monnalisa resturant (where everything was purple, even the bin bags!) was looking over this fantastic open building with it's decorated walls and ceiling. We aren't actually sure what this building was for, but it seemed to be operating as a bar/old boys club. It was very pretty and attracted a lot of attention from the flashing cameras- mine included! 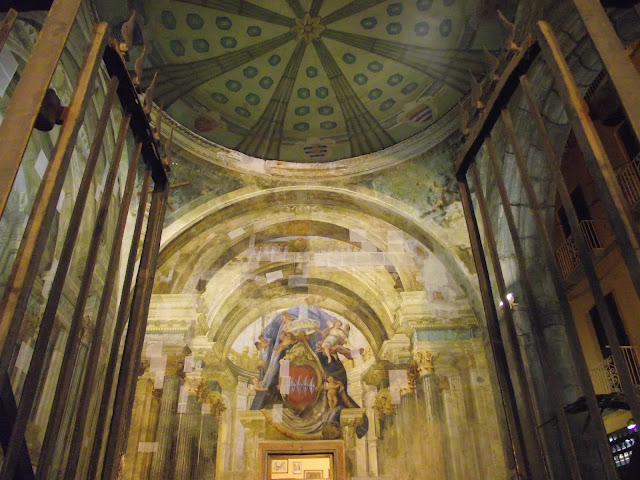