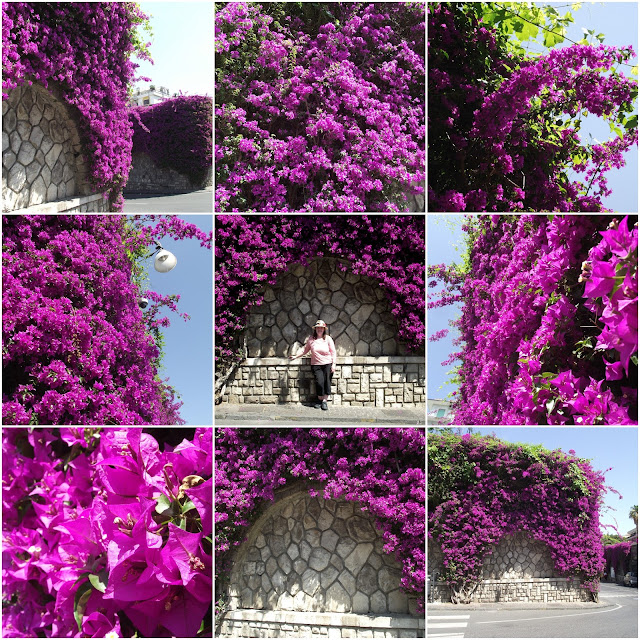 You might be wondering what happened to Day Four in my Sorrento posts? Well I have to pre-warn you, I am pretty giddy with excitement as I finally got to visit Pompeii!! It was such a vast place we couldn't walk around all of it in a day (perfect excuse to go back in my opinion), and I took so many photos it needs a blog post all on its own, so I shall do that one separately for you. I hope you are as excited as me!

This fantastic wall of purple gloriousness is directly opposite the train station (the stazione) in Sorrento. It was what greeted us as we got off the coach from the airport on our first day, and was greeting us again as we waited to board a Sorrento tour bus which was due to take us to various pretty view points further along the coast. The flowers in Italy are just amazing, this particular flower, Bougainvillea, thrives in really hot countries, although you can buy it here in England as a hot house flower. When I went to Greece several years ago, the pink colour was everywhere, but Italy seems to favour the purple one, which is just as beautiful, I think you'll agree. 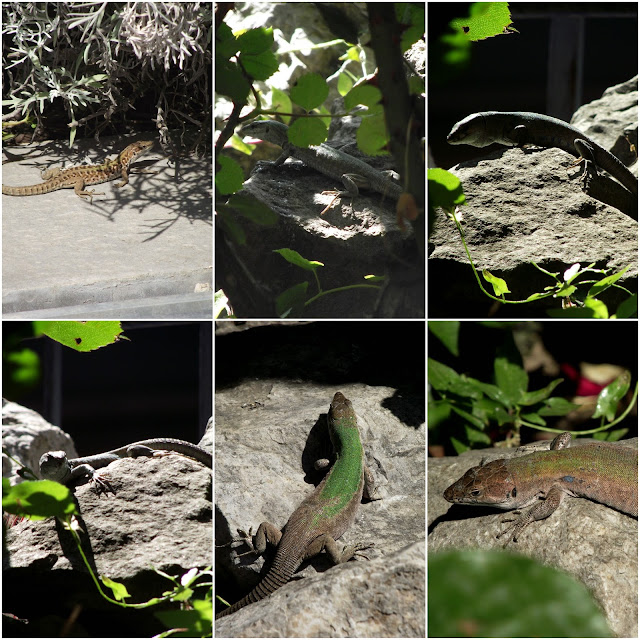 We had arrived a little earlier than needed for the tour to make sure that we could book on it, and spent the waiting time searching for little lizards in the undergrowth. At our hotel we had the yellow spotted lizards (top left hand image in above montage) but the ones by the stazione seemed to all be green. Some of them were quite big too! 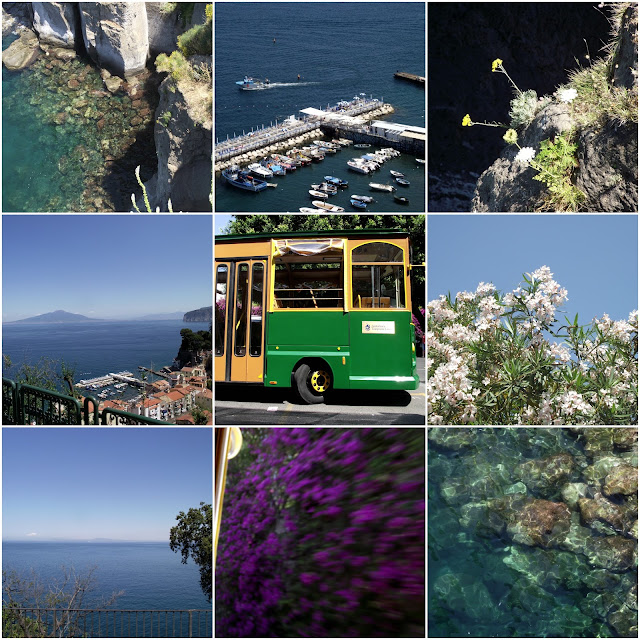 Our bus arrived and set off in good time- in fact it left just as another group of English tourists arrived at the tourist information desk to book tickets and the chap at the desk had to chase after us to flag the driver down and make him turn around and pick up the stragglers. We eventually set off properly and picked up a tour guide along the way who pointed out lots of interesting points about the town, as well as asking us to be ready with our cameras for the most beautiful parts of the tour. We climbed up windy mountainous roads and sailed around very narrow corners, the driver seemingly mindless of how close to the cliff edge we were driving! It was definitely worth it though, and we had a 10 minute break at this beautiful vantage point where we could look back at the harbour and cliff edges we were more used to. 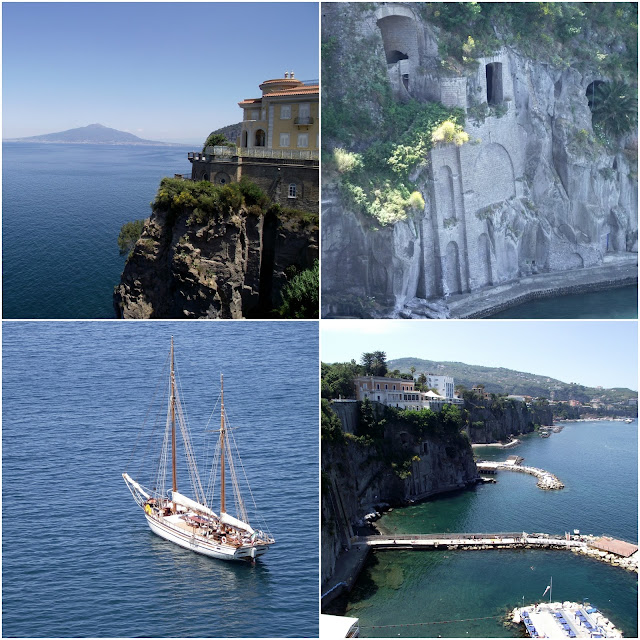 It's amazing how the locals have used the cliff edges. There are archways and doors and windows that don't appear to open into anywhere carved into the rock, layered on top of each other for no apparent reason.
The tour ended at a local Limoncello factory which was free to visit. We each got a little snifter of limoncello (golly that stuff comes out through your nose doesn't it?!), and learnt how the drink was made. Apparently you peel- using a potato peeler- the skin off seven or eight lemons, and steep them in one litre of water, one litre of pure alcohol and 800g of sugar for five or six days. Then you strain it and voila! The rest of the lemon is used to make their gelato or pure lemon juice.
At the back of the factory was a lemon grove which smelt delicious, and was a lovely restful place to eat lemon gelato, with a bit of cherry gelato on the side. The size of the lemons was pretty incredible too, some of them were quite literally the size of your head! How the branches held them up I have no idea. 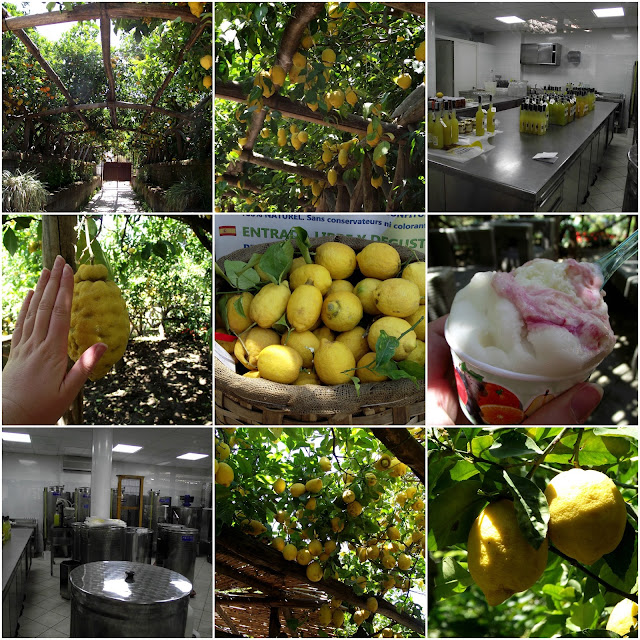 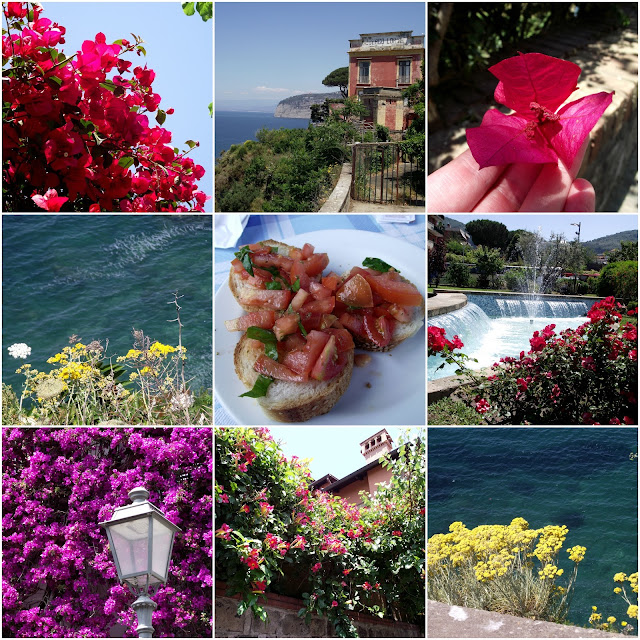 Dragging ourselves out of the sanctuary of the lemon grove, we walked a little way along the road, taking photos of the beautiful flowers and sea views, and went straight into a little cafe which was set above the height of the houses so you could look out over the sea. I tried my first proper Italian bruschetta which was delicious! Simple food can often be the best and for those of you who haven't tried bruschetta, it is essentially just tomatoes, basil (or other herbs) and oil/dressing on toast- delicious. You can dress it up with olives or mozzarella cheese, but the staple part is tomatoes and toast. 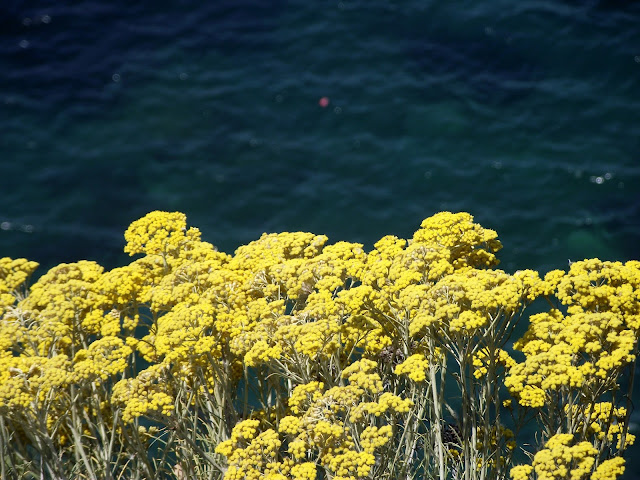 We treated ourselves to another glimpse of the glorious sunset that evening. A lazy end to a quite lazy day, with some shopping in the tourist streets on the way back to the hotel. I picked up some badges for my camp blanket, pretty painted postcards and some lemon flavoured chocolate from a very keen saleslady who insisted I try all of the chocolate flavours first. The shop owners are quite funny as they all stand in the doorway to their shops which means you can't go in unless you push past them- seems to be a funny way of attracting business but that's just how they work. 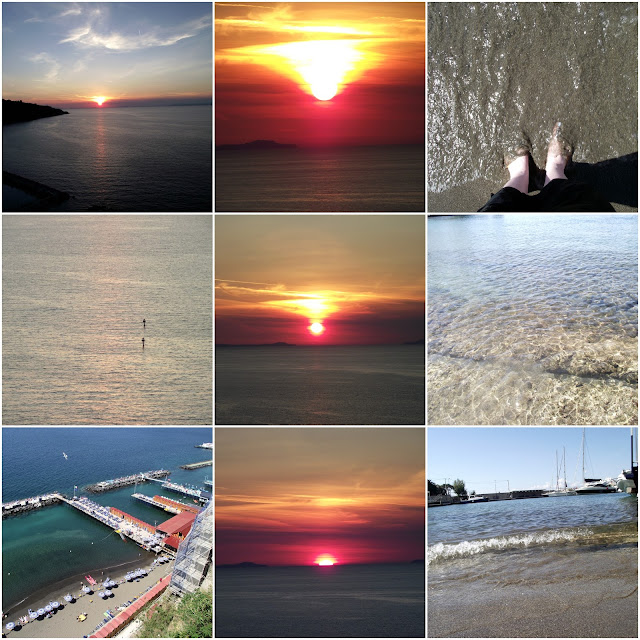 This was another quite lazy day as we were recovering from the previous day's Pompeii excitement, and we were also due to leave for the airport just after lunch so couldn't really get our teeth into anything.  It was a leisurely breakfast at the hotel, which had been a really lovely place to stay. What had attracted us when looking for hotels to stay in, was the colourful tiling in the pictures, and the tiling in reality did not disappoint. The buffet style breakfast was included in the price and took place in a really lovely room with brightly coloured, hand painted crockery that complimented the tiling on the floor. Croissants, cereal, eggs, toast, fruit, little frankfurter sausages, pastries, cake and doughnuts were all on offer, and I even managed to figure out the complicated coffee machine that required different taps for hot water, and little slots for special pot filter things.....I prefer the ease of instant coffee in the morning; one spoon of coffee, hot water and you're done. 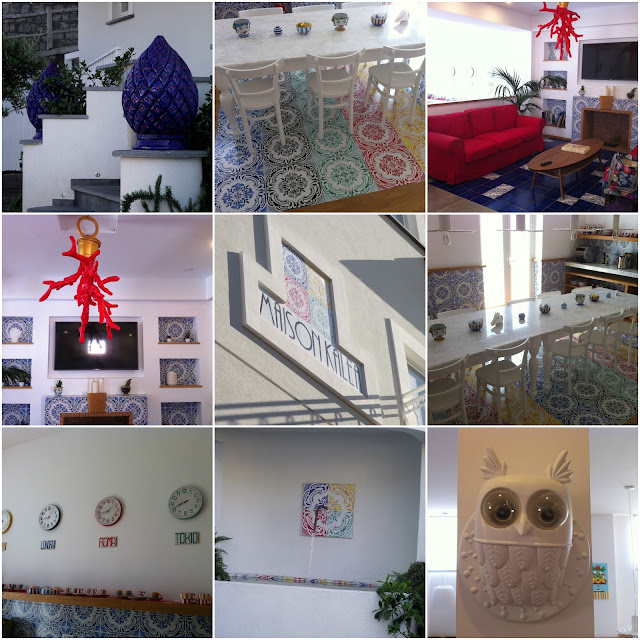 After breakfast we had about an hour to pack and then to sit on our little balcony which looked over the communal patio filled with brightly coloured chairs and cushions. This was such a peaceful place to sit in the evenings as you could sit and watch the stars come out and listen to the night life of Sorrento without it being overwhelming.
Each bedroom had it's own colour, ours was the 'green room' with the mad looking pear cactus lady print hanging on the wall. 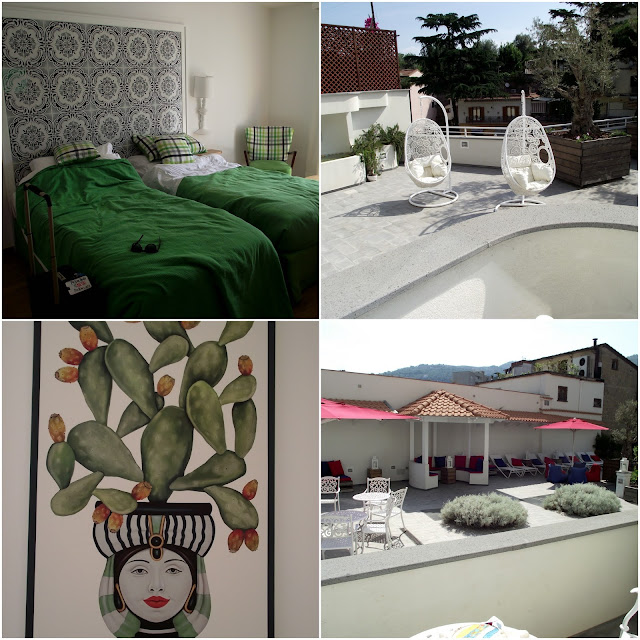 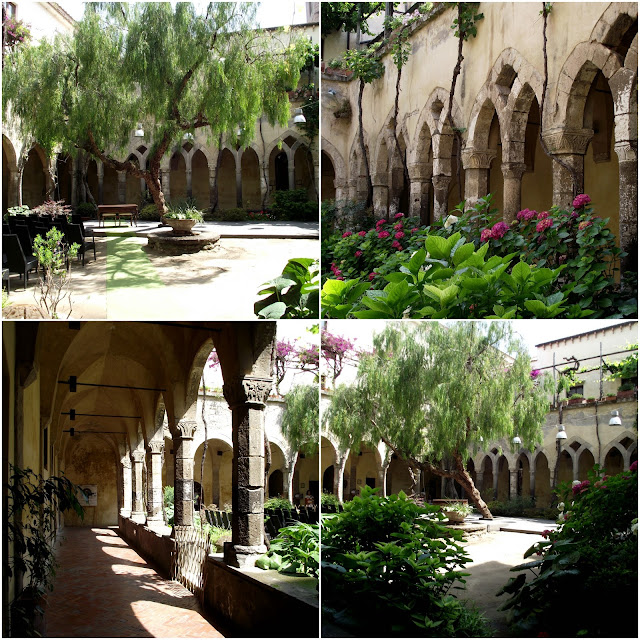 We were allowed to leave our suitcases at the hotel for safe keeping after we'd checked out so we went to revisit some of our favourite places and came across this beautiful church cloister which was set up for picturesque weddings- and actually, later on, we kind of gate crashed a wedding by accident as the actual covered part was open to the public as the entrance to a photo gallery, but there was a lovely wedding going on in the middle of it all.
We backed out slowly and made our way past the viewpoint where we had watched the two sunsets, the strange windy pathway down the side of the cliff to the wooden jettys below, round to the harbour and into a little cafe which was situated on a wooden jetty of its own, jutting out over the water of the harbour. 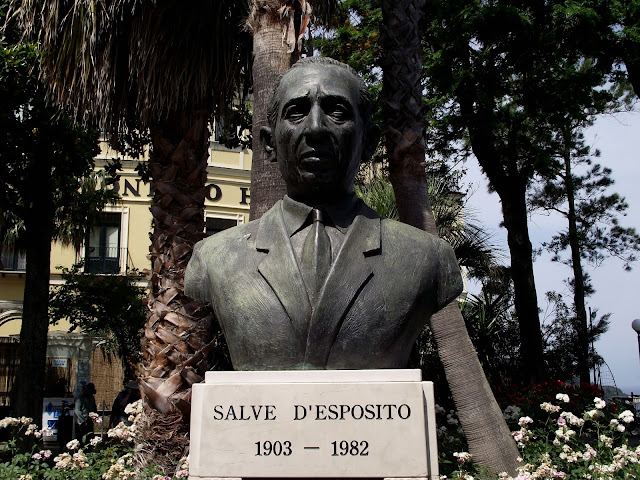 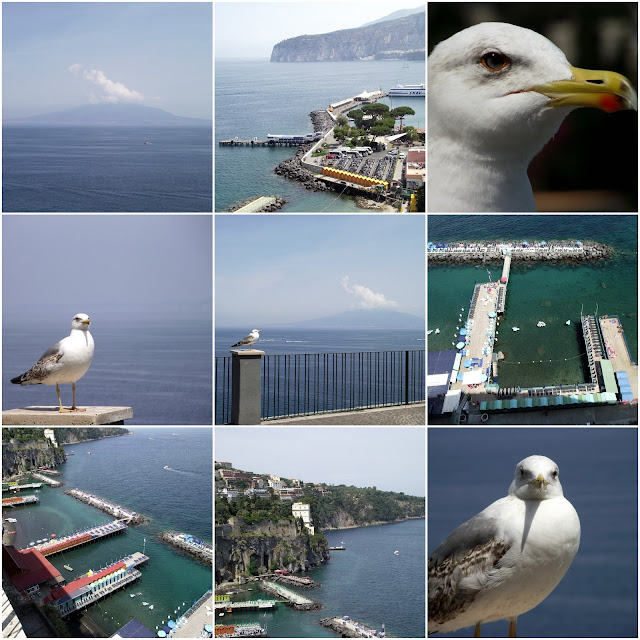 A couple of hours were spent whiling the time away over coffee and the biggest piece of bruschetta I have ever seen! It was delicious- especially after I had drizzled it with olive oil and balsamic vinegar. 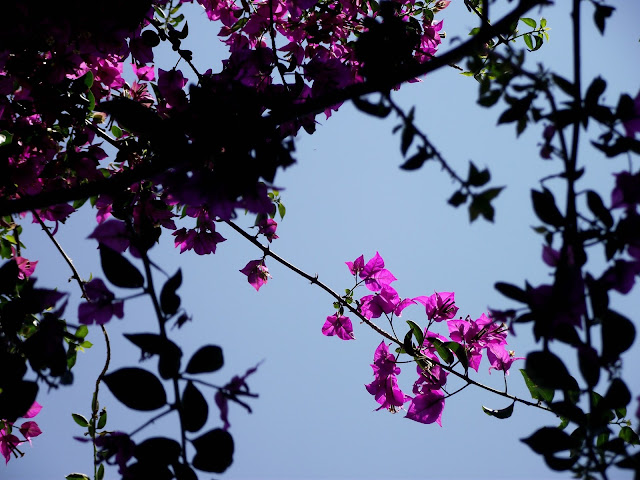 The same coach that had dropped us off at the beginning of the week came to collect us from the fabulous purple wall of Bougainvillea, and interestingly, drove us the scenic route back to the airport, keeping to the coastline and practically swimming along the beach at times. 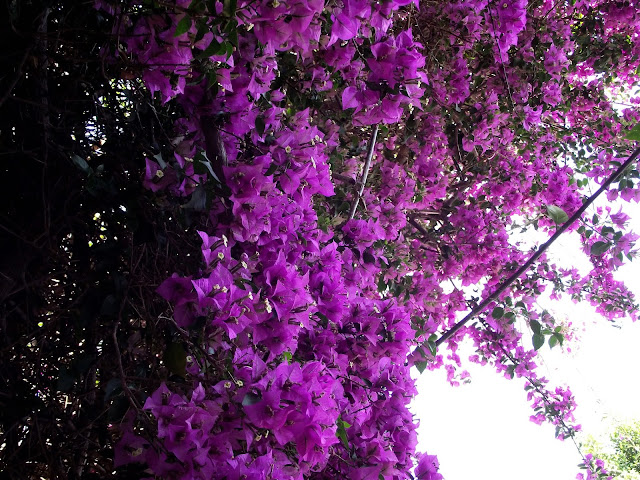 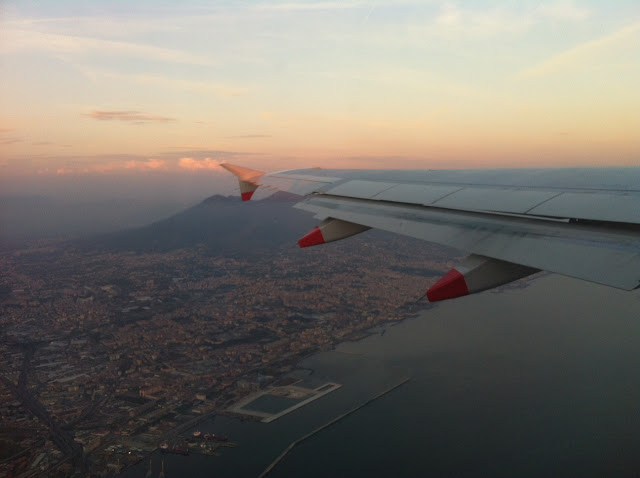 We spent a few hours at the airport as we had had to get there quite early. I had my stitchscape to work on whilst we waited; it's been really lovely to be able to work on a Sorrento inspired piece this week, and I managed to collect some special treasures to make this piece a real memory embroidery. All too soon it was time to say a proper goodbye, and Mount Vesuvius was one of the last things we saw of Italy out of the plane window, almost like it was waving us goodbye! Not for too long though I hope as there is so much more I would like to see there- Herculaneum for one, and the rest of Pompeii, inside the crater of Vesuvius, Positano, Amalfi.... 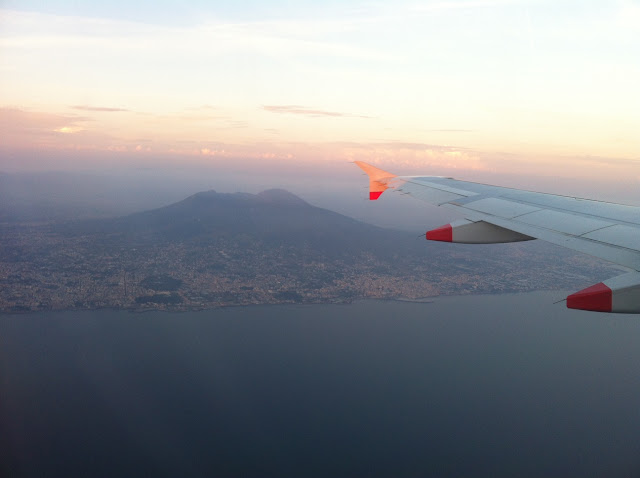