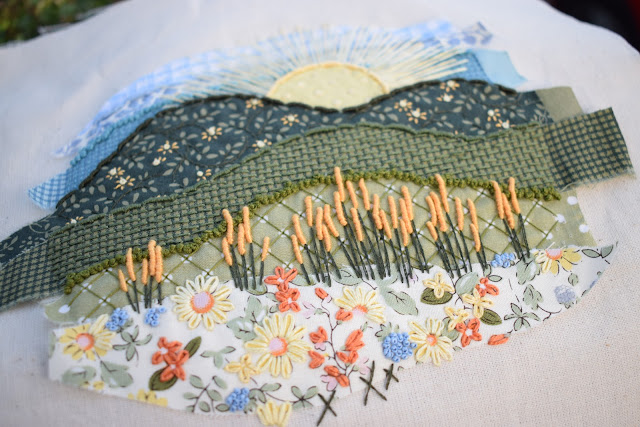 It's finished! A super cute, super sweet, summery stitchscape, that hopefully one day you could stitch yourselves! The fun part is over and now it's lots of editing and sourcing and cutting and packaging and trial running. The kit needs to be perfect before you can get your hands on it so bear with me a little longer.
I have tried very hard to limit myself on colours and fabrics without seeming mean, something I hope I have accomplished. Several of the colours in the bottom layer have been repeated further up which helps to tie the whole embroidery together and is almost as if the sun and sky are mirrored in the foliage stitched onto the bottom layer.  My usual style of throw anything on has been somewhat restricted and I had to carry a ruler around with me on the bus so that I could monitor how much of each colour thread was used- it earned me some very strange looks I can tell you! 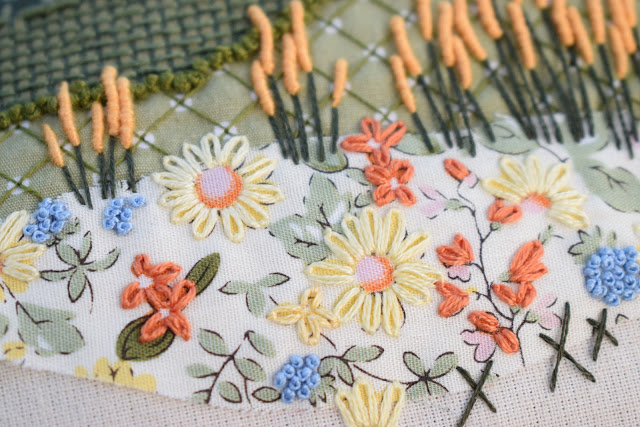 Another thing I realised during this process was how often I use the humble backstitch. It really is such a versatile stitcher's friend as it can create a host of different textures and appearances. I have used a single strand of embroidery and back stitched diamond lines to create a quilted effect, added a second strand and made rows of (something I am calling) brickwork back stitch, which uses the squares on the fabric, working a stitch two squares wide and alternating the rows so they look like rows of bricks (the green striped centre layer). This technique has been repeated in the sky with the blue gingham fabric, but I have also worked brickwork back stitch in vertical stripes over the top which then outline each individual square.
And of course it has been used to follow windy stems in both single and double strands of embroidery thread, a different appearance once again! 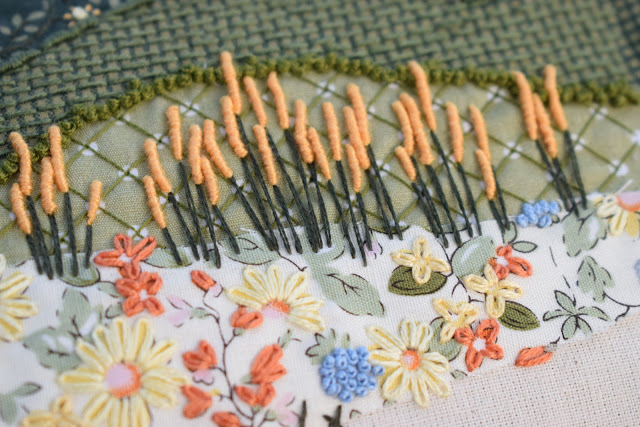 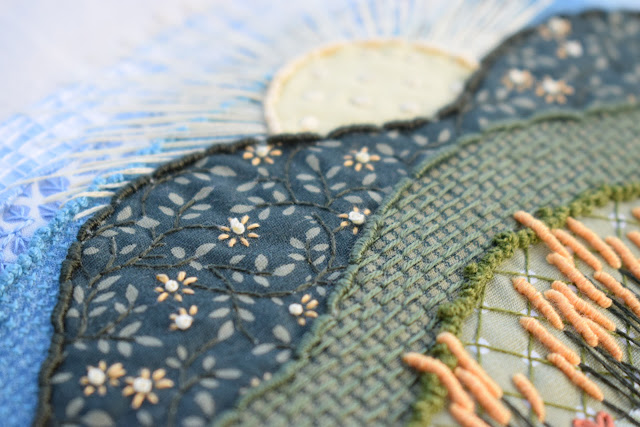 The tiny flowers in the green hills are very sweet. They are made up of  a single strand of embroidery thread, twisted round into a five twist french knot for the centre, with the tiniest stitches in orange for the petals. These follow the pattern of the fabric so will be positioned slightly differently in every stitchscape. 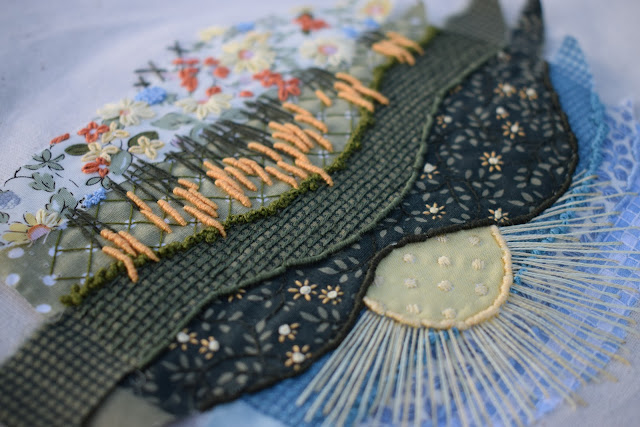 The sun is very simple and uses only two shades of yellow. The white polka dot spots have been filled in with satin stitch, the shape outlined with bullion knots and then big straight stitches in two colours for the rays of sunshine. I work my rays pretty much the same way in all of my sun-scapes; the beginning rays are started at the join between each bullion knot, then halfway along the bullion knot and then fill in each gap between the previous stitches until it seems full enough of light. You have to kind of imagine where the centre of the sun is to make sure the lines don't get out of kilter. 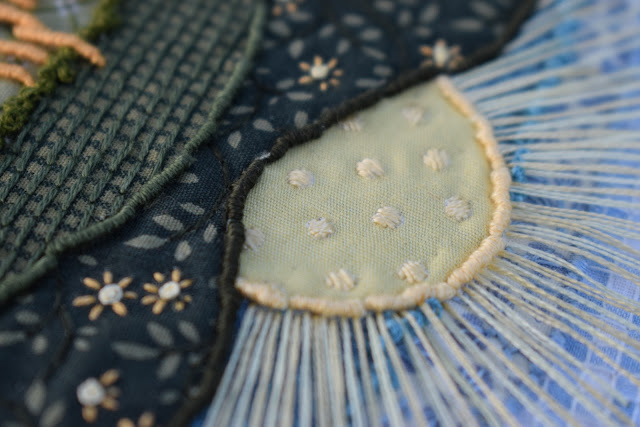 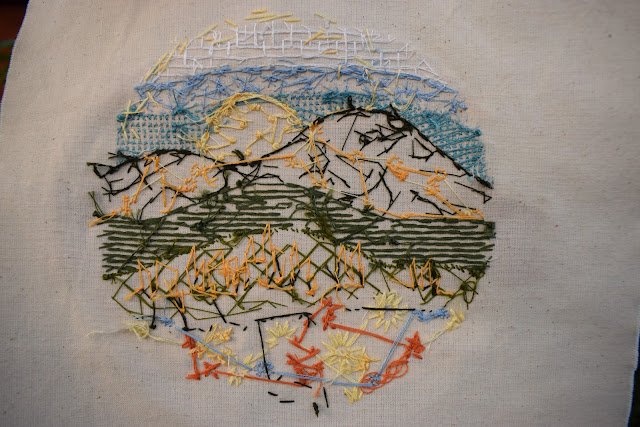 The back shows the colours used pretty clearly as it isn't distorted by the colours of the fabrics. I have used ten colours; white, two types of blue, three types of yellow, orange and three greens, and these have been a mixture of Anchor and DMC threads. 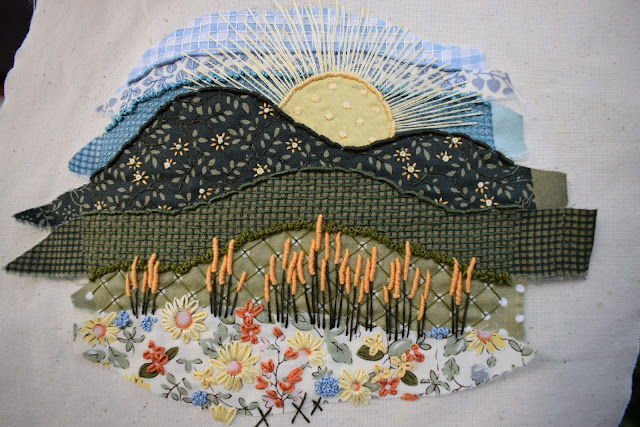 The flowers at the bottom are rather lovely too, and follow the pattern quite closely. The big yellow flowers are made from detached chain stitches worked around the printed petals, in the same way as the orange flowers which also follow the fabric pattern. The blue flowers are made up of two stranded, one twist french knots so they are sweet and delicate.
I haven't filled in the green leaves here as there is a lot of green in the centre of the stitchscape, but I've used the darkest green to fill in long stitches for my bullion flower stems wherever there was a gap in the chain stitch flowers. You'll notice I've gone 'over the line' with some of my flowers which is helping to blur the boundary edge without making an obvious bullion knot or french knot line like the other layers.
I'm really rather chuffed with this piece, it is only a little 15cm embroidery but there is still a lot of work and a variety of stitches that aren't complicated but are quite repetitive. The stitches used are; back stitch, cross stitch, detached chain stitch, bullion knots, french knots, straight stitch and satin stitch.
So, now on to the literature and the next stage of kit making! 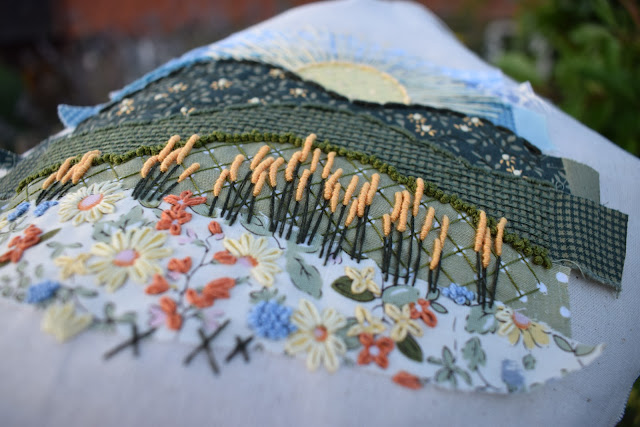