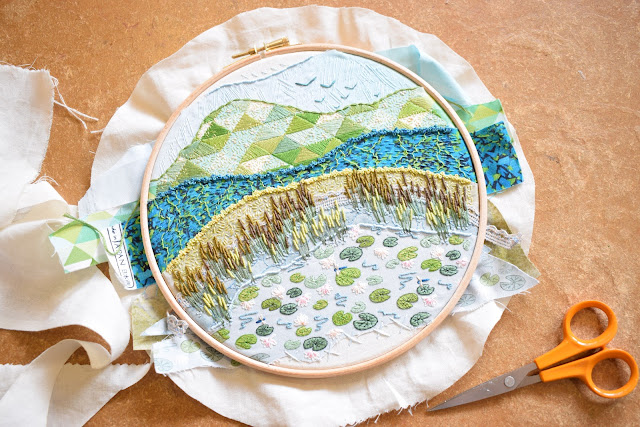 Last week I fell down an online fabric buying rabbit hole. In fact it was probably more of the whole warren of rabbit holes as I spent ages drooling over my laptop screen with all the loveliness that was appearing (this is what lockdown does to a fabric addict!). I was trying to find a specific Lewis & Irene pattern, although I can't remember exactly which one it was now and I'm not entirely sure I ended up actually finding it anyway! What I did find was this gorgeous Lewis & Irene Waterlily print which I totally fell in love with.
Waterlilies are up there amongst my favourite flowers, the waterlily house at Kew is the best one and I love visiting Sheffield Park during the waterlily festival - the reflections in the water are magical and they just look so serene bobbing gently atop the surface of the water. 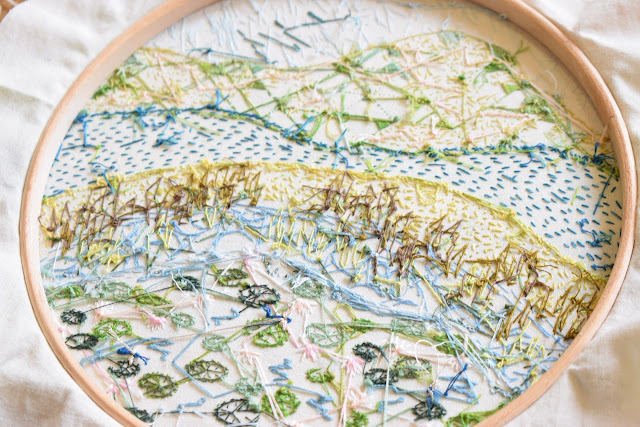 I decided that as a treat for completing my Bluebell Garden kit, the purchase of several new and fabulous fat quarters was totally justified, as was the several full days of stitching at the end of this week. I haven't really done much other than sitting in various places around the house/garden and sewing. Utter bliss.
Before lockdown I bought a couple of 20cm embroidery hoops with the intention of making new Stitchscapes to add to a hoop wall. It's my new favourite way of framing Stitchscapes because it's light, versatile, cheap, easy and, as they are stitched within the confines of a circle, makes sense. I'd forgotten all about the hoops, tucked away in a drawer so it was a good time to rediscover them as I've been working a lot in smaller hoops lately and it's nice to go bigger once in a while. 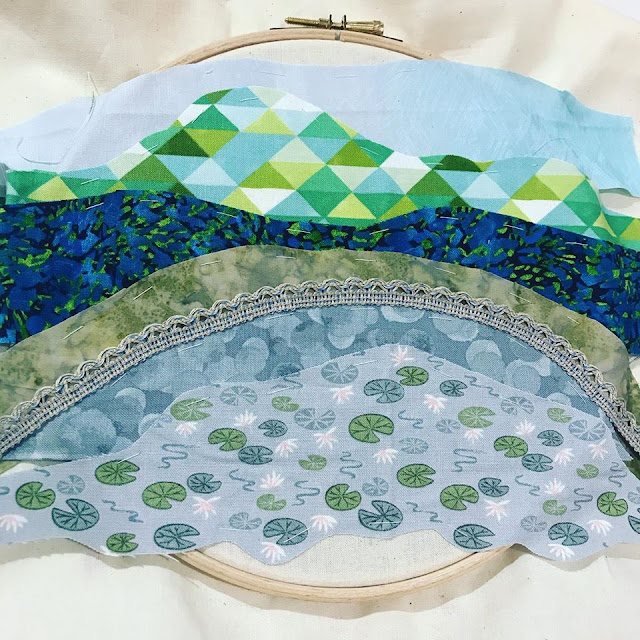 My vague idea for this piece was to create a pond; waterlilies at the front leading to deeper waters further in, off to a nice little decorative fence or sand back type situation and then maybe a field of blue iris flower type things and a few hills. The clear part in my mind was the pond and after that it all got a bit hazy so I just had to find fabrics from my stash that complemented the water in terms of colour.
The trick with choosing fabrics for Stitchscapes is to look beyond what is physically printed in front of you. The highly geometric fabric is one I love but it is very at odds with the soft waterlily print when you first look at the original fabrics, however, if you look closer the balance of colours is correct. There are tones of green that are shared between the triangles and the lily pads, the blue is reflected in the sky and in the water and the white is in the lily flowers. It's all nicely balanced and if you have sections which aren't quite as co-ordinated, these can be covered with embroidery threads to help even things out. In this case, some of the brighter greens were brought down into the lily pads which have seven different greens in would you believe? 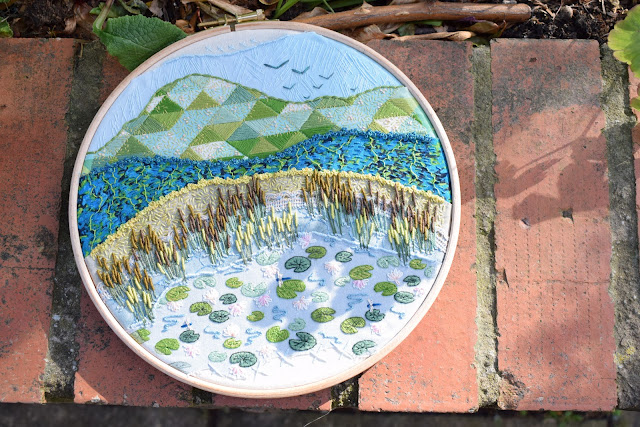 I filled in all of the slightly more wishy-washy lilypads which are in the original print so all of them are solid shapes and some are slightly brighter as well to make the bottom near-match the zestiness of the top. (It's not often you get to say that in a sentence!!)
The flowers were also given two tones of pink to make them appear more naturalistic. 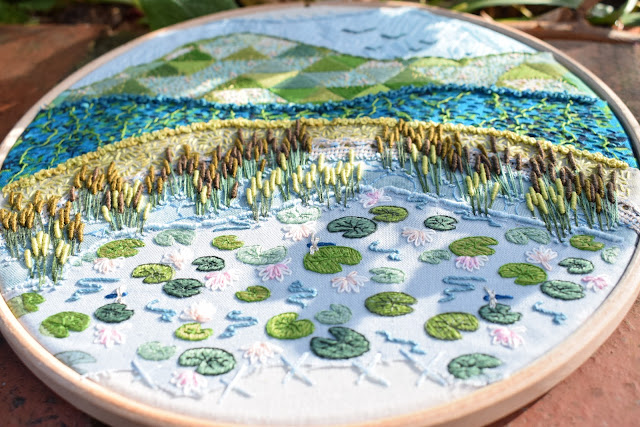 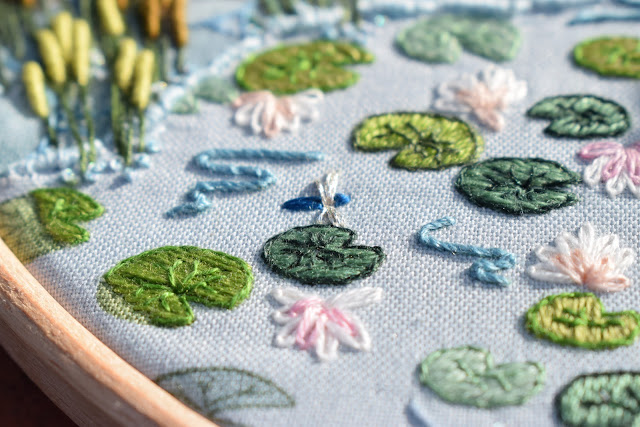 These cute little dragonflies were the last things to be embroidered, following an excellent suggestion by The Mother. They have been made with a couple of lines of straight stitch for the body, three closely stitched straight stitches for the head and some stitches in metallic silver for the wings. Nothing complicated but just enough to give the appearance. 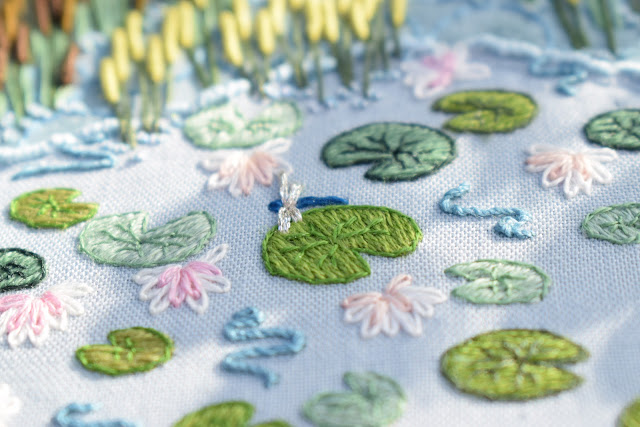 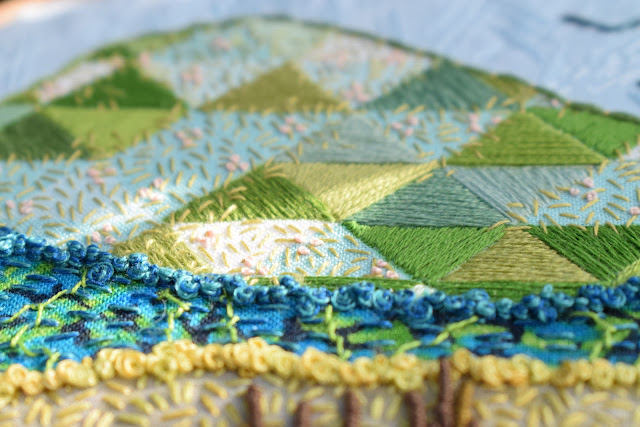 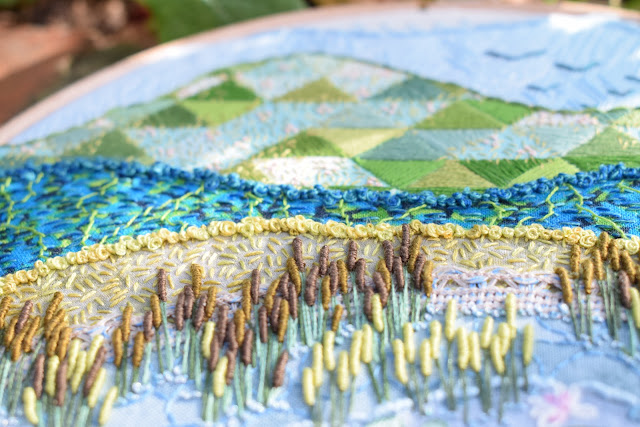 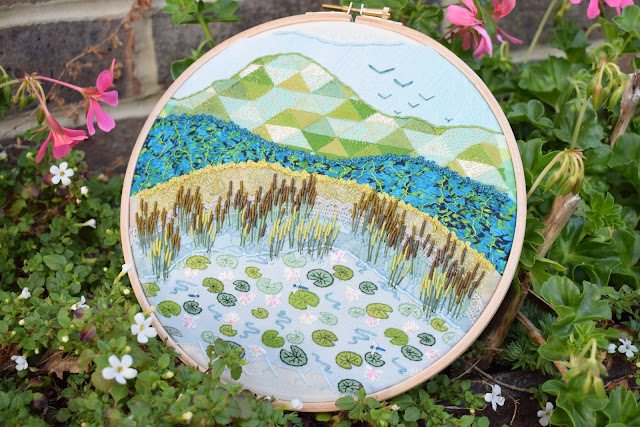 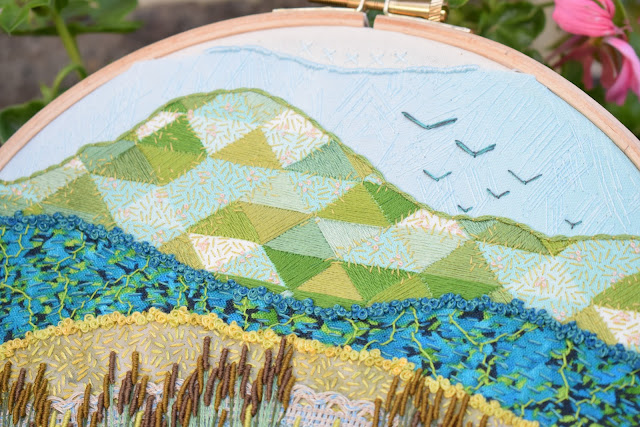 The lovely bright blue layer was the most complicated one and I just couldn't think what to do with it so it was left until last. I knew I wanted a chunky seed stitch for the layer below, and I found a lovely variegated yellowy/green floss which fitted perfectly with the mottled space dyed fabric. I mixed this thread up further by using two strands but swapping their ends so that the colours didn't match all the way along .
For the blue layer I eventually hit upon the simple and tried and testing method of working a running stitch across it, which I have done in blue, and then a vertical whip stitch randomly throughout the layer to give more texture and break it up a bit - which actually works really well with the jagged nature of the print itself. I've been a bit playful with the blue thread and again this is using two strands, but I've used a single strand of two colours at once because I couldn't decide on which one I liked best. I've kept this colour mix for the french knots edging this layer so you can see the combination a little clearer here. 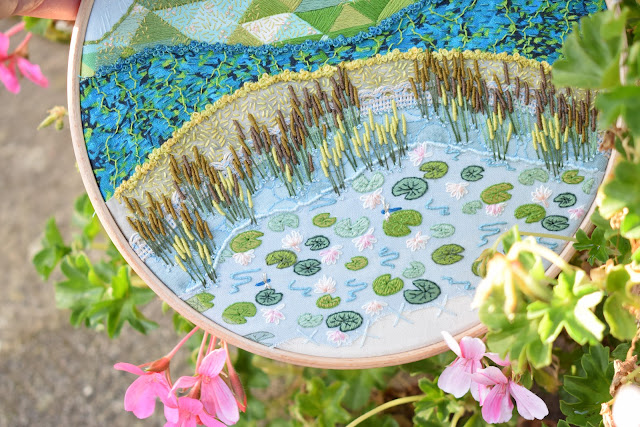 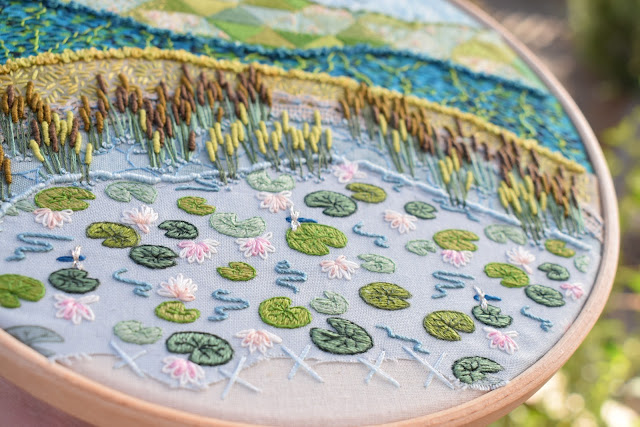 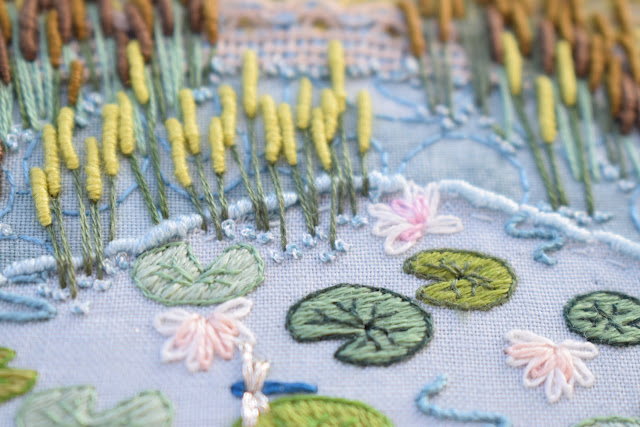 No watery Stitchscape is complete without a touch of sparkle and although I didn't want to massively stitch waves or ripples into these layers, the bullion knot rushes were a little awkward just plopped on top of the water and needed something to hep blend them in. I've combined a single strand of a metallic sparkly ice blue, with a single strand of the blue from the deeper water layer, and worked a one twist french knot wherever I fancied at the bottom of the reeds and also at the bottom of the lace edge where it was just a raw finish. 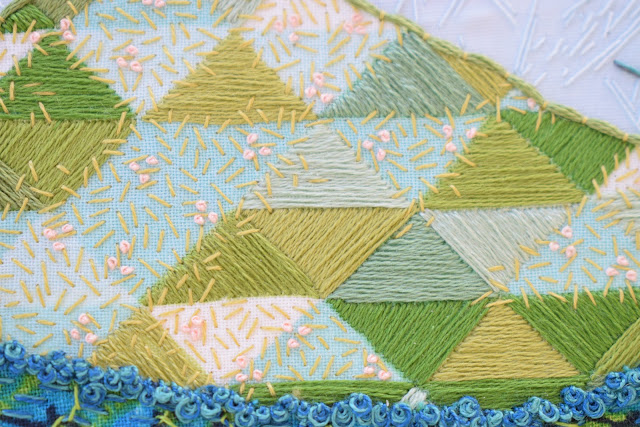 I'm quite in love with this geometric fabric. The number of colours in it are amazing, although now I've gone over it I've taken out quite a few colours to tone it down slightly with the lily pads. I love that the triangles are worked in different directions because they really catch the light differently and almost appear to undulate across the landscape.
I could have done the blue and white triangles in a satin stitch as well but I didn't want to particularly highlight them so have instead tried to tone them in a little bit with a single strand of seed stitch. At first it was just going to fill these areas but that looked a bit odd so then I tried taking them over some areas of the satin stitch to help blend them. It was going to be an all over seed stitch but I liked the contrast between the clean edges and the burred ones so it ended up being a sort of patchy affair which has great texture.
The pink from the lilies I've brought up onto these hills with little clusters of two strand, one twist french knots in the blue and white areas only. It has really prettified this section and I love it even more! 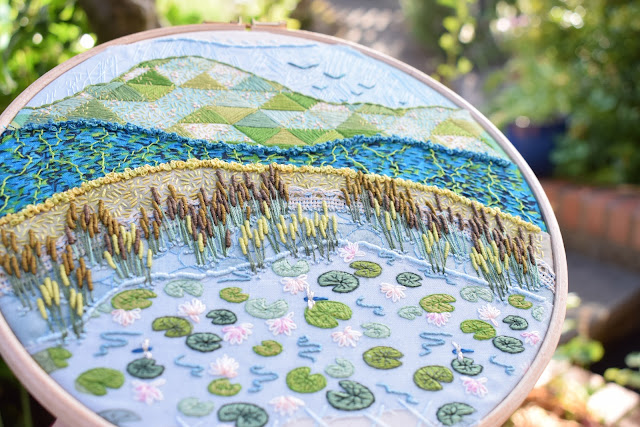 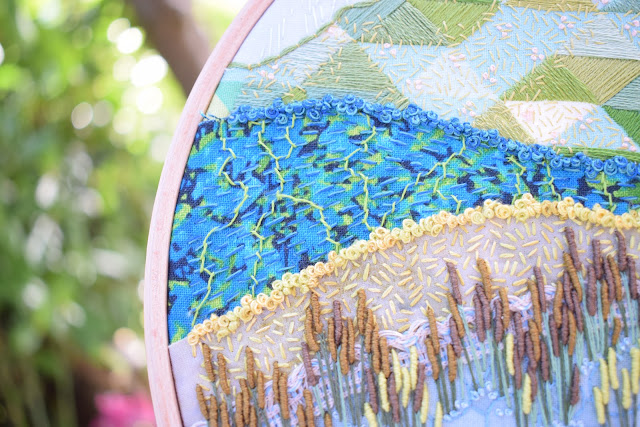 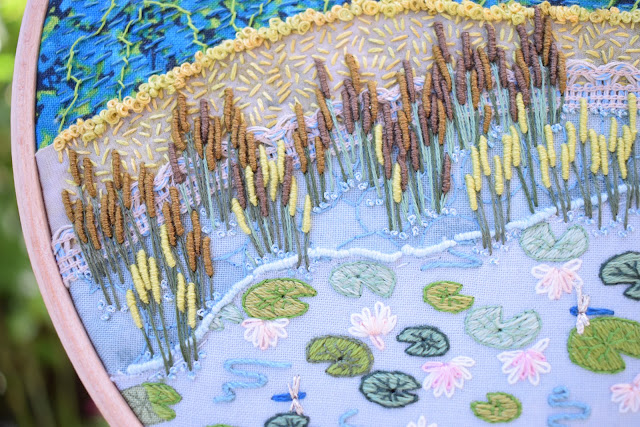 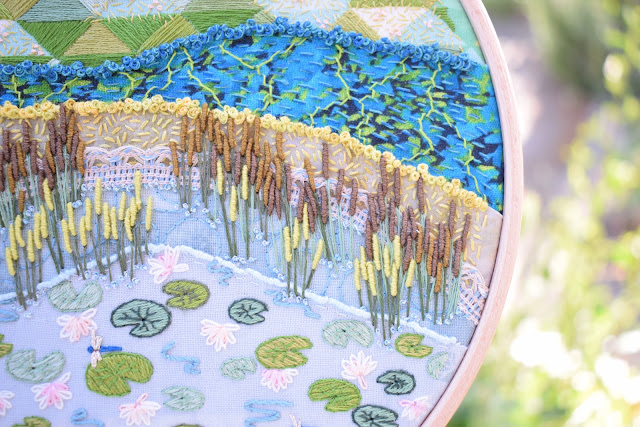 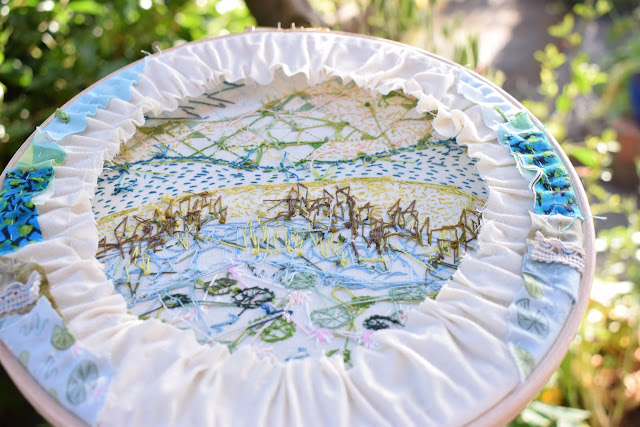 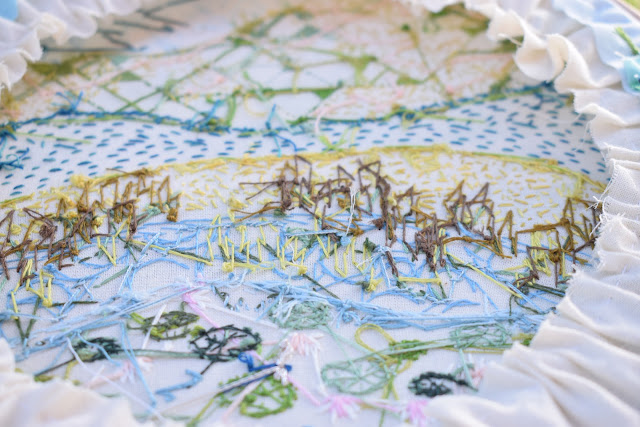