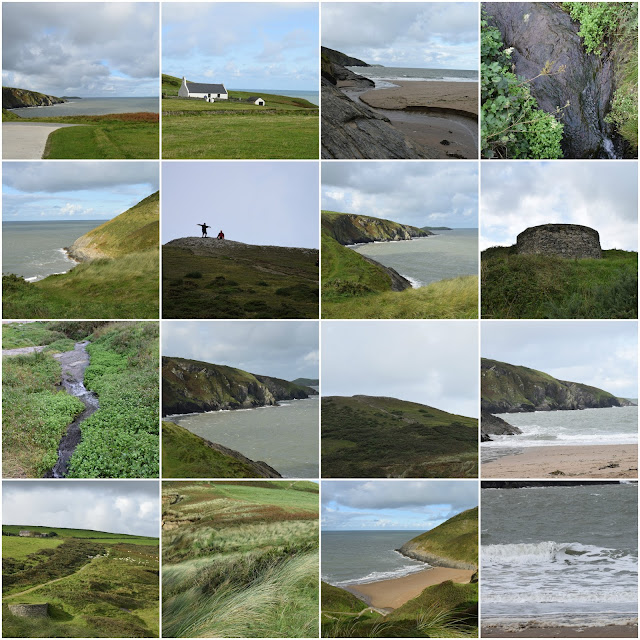 Tuesday (Day Four)::
Mwnt Beach is beautiful. I'm just going to state the obvious here as you can see for yourselves how pretty it is! What the photos don't show you is the rather brisk wind trying to casually knock you over as you make your way from the carpark downwards to the sandy beach. There is a set of stairs to help you on your journey down, and a little stream which bubbles happily alongside. The Mother and I made our way to the sheltered cove, and the others climbed up to the top of a hill cliff which apparently offered even better views out towards the sea.
As we were there early, we pretty much had the beach to ourselves for about an hour, other than the odd dog walker. The swooshing of the waves, the cry of the birds, the splash of the wave spray crashing against the rocks, the occasional faint moo of the cows lining up on the hill are the best parts of a beach in my opinion (other than beach treasure; sea glass, little shells etc. Sadly there were none of these to be found). 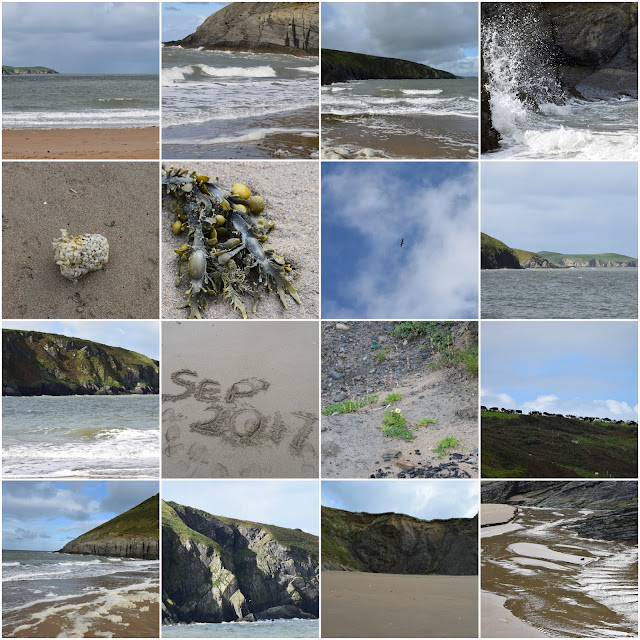 At the top of the hill is a beautiful squat little white church, The Church of the Holy Cross. This isn't owned by the National Trust but is kept open so you can look around and there are snippets of historical facts inside you can read. I just loved the way it looked, hunkered down in the long green grass- especially when the sun came out and the blue sky appeared. The colours are almost overbright in their sparkly cleanliness. 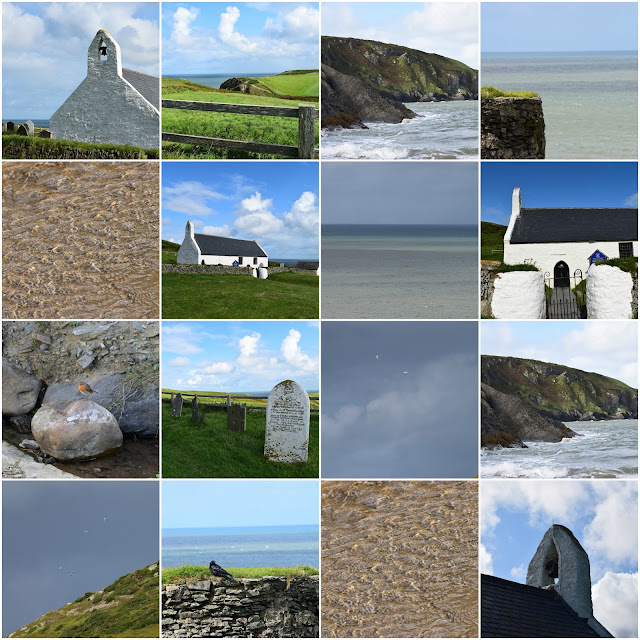 We wandered around Cardigan town centre during the afternoon and had a spot of lunch in one of the pubs there but there wasn't much to take photos of. Later that afternoon we were back in the little town of Cilgerran, visiting The Welsh Wildlife Centre. Sadly we didn't spot any otters- or any other wild animals for that matter- perhaps we went at the wrong time of day or the wrong time of year, but the views of the River Teifi were lovely and we followed a quick walk around which landed us back in the carpark. 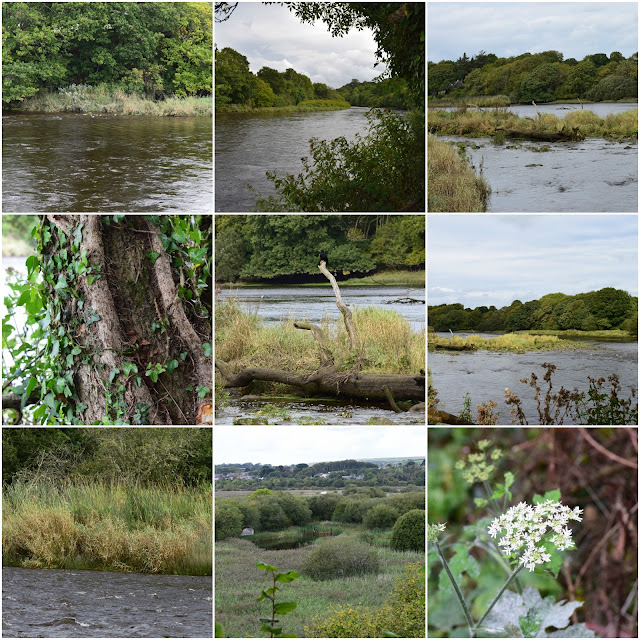 Just before leaving though, a herd of very charismatic Water Buffalo caught our eye in the field next to the parking space. This chap was a real poser and stood for ages trying out different positions for me to take photos of. Work it baby! 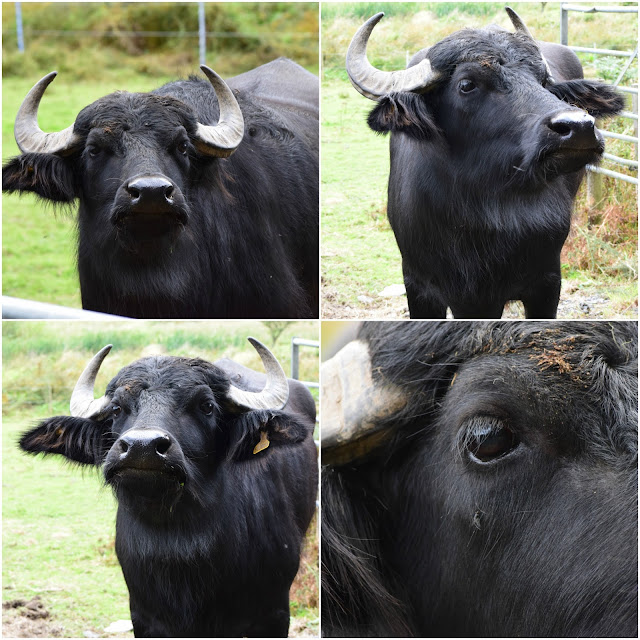 Wednesday (Day Five)::
As always, we were out early with a full day planned- no lie ins on our holidays! First stop was the Pentre Ifan Neolithic Burial Chamber. Everywhere in Wales seems to be set out with a beautiful view- it really is a lovely part of Britain.
The monument as seen today is a collection of seven main stones. The largest is the huge capstone which is apparently 5 metres long by 2.4 metres wide, and nearly a metre thick. How the builders/creators lifted it to put it on top like that, resting on three upright stones, I have no idea! Originally, experts think, there would have been a mound towards the back of the monument, with three more upright stones forming an entrance and a doorway cap. The mound itself is thought to have had dry stone walling which has now been mostly scattered around, and there would have possibly been several individuals buried in the chamber, re-used over time, although no bones have been found.
Of course, as always, there are alternative theories about this set of carefully positioned stones, one being that it was never intended to be a burial mount at all, perhaps as these stones are so nicely finished and positioned, they were meant to be a high status monument, adding significance to an already significant place.
Whatever its original intent, it was pretty spectacular, and was also a handy shelter when a random rain cloud passed over, causing a beautiful rainbow to appear towards the mountains. 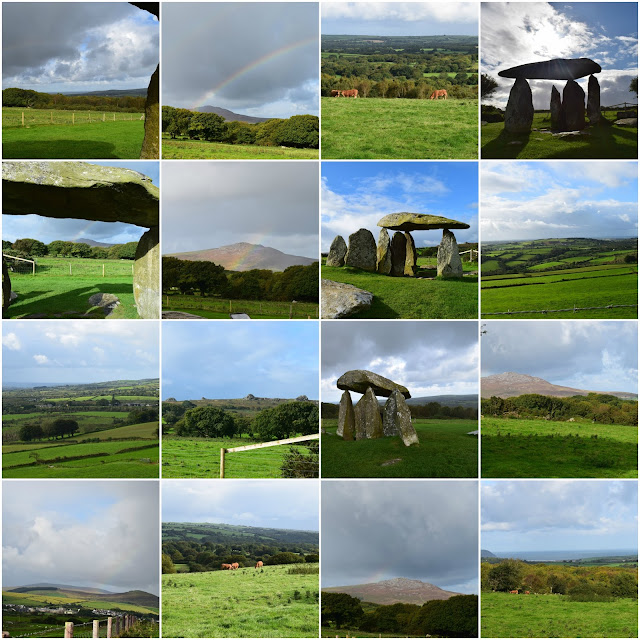 The monument was on the way to St. Davids which is a city that The Mother was wanting to visit. It is one of the smallest, if not the smallest, cities in Wales, and was granted city status by Queen Elizabeth II because of it's cathedral, which is very impressive. The site of the current cathedral is also the site of the partially ruined Bishop's Palace, a medieval representation of the power and influence of the church at that time. The standing structures were mostly built by Bishop Henry de Gower who really went in for lavish architecture, with fabulous chequerboard stonework still visible above the windows, and a super circular wheel window along with impressive stone staircases and arched porches. 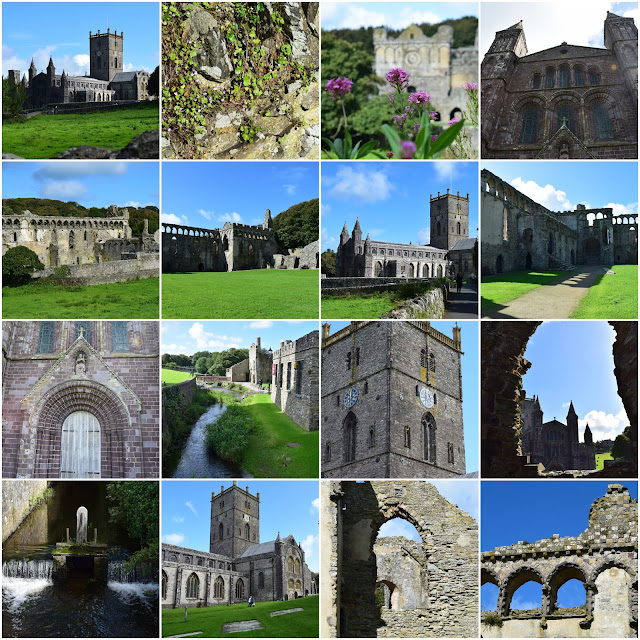 It was very interesting walking around the Bishop's Palace and seeing the clean edges of the cathedral through the crumbling edges of the older site. Something which also caught our attention is this brilliant metal fence and gateway at the entrance to the palace (not an original feature). The circle part is a replica of the wheel window, but it is the little details amongst the beautifully crafted leaves; the spider webs and spiders, the caterpillars and butterflies- it's really lovely! 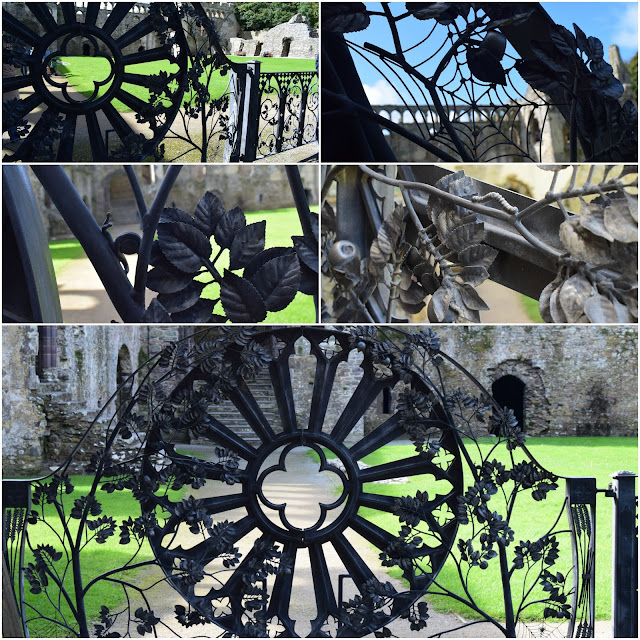 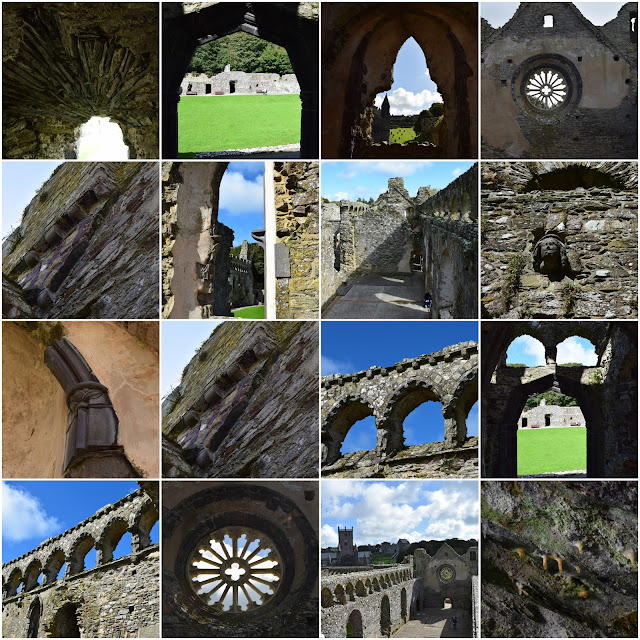 There is much to explore here as you can go up little tiny spiral staircases to the remains of upper levels and walls, and down into servants quarters and storage rooms. There are three sides of the courtyard to explore and imagine how it might have looked when fully furnished and lavishly decorated- from what I could tell, there was no expense spared to keep wealthy and important guests happy. 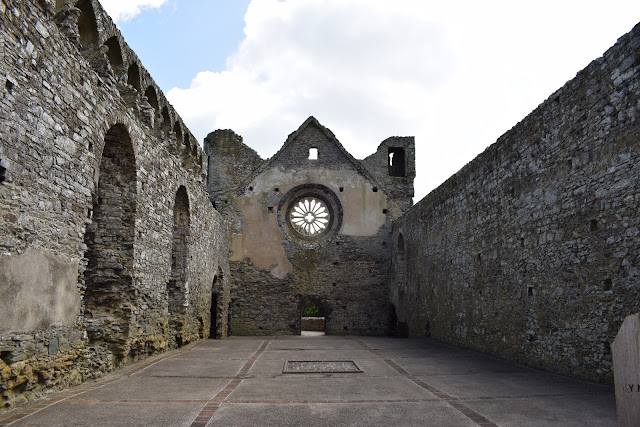 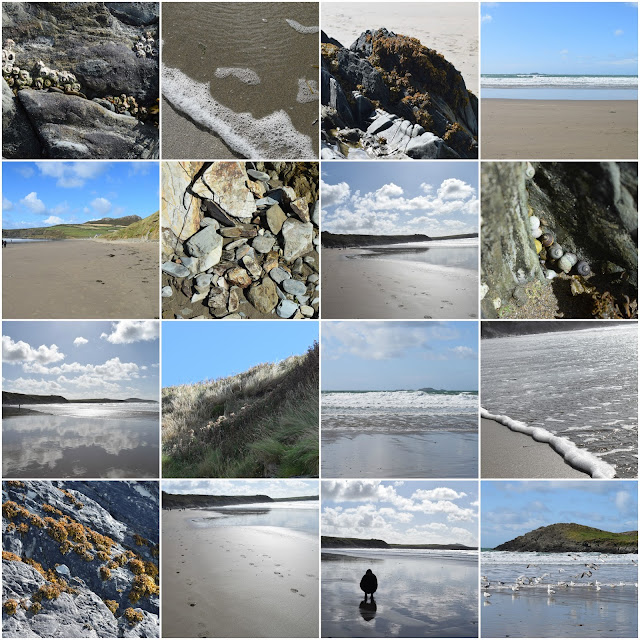 We rounded the afternoon off with a trip to Whitesands Beach, an absolutely vast stretch of sand, sea and sky! It's only a couple of minutes away from St. Davids and with the sun blazing down and creating smooth reflections of the clouds on the wet sand, it was a lovely end to the day. Amazingly, there was no beach treasure to be found here either! What is going on with Welsh beaches? I did see some beautiful clusters of shells adhered to the lower rocks of the cliffs but as they weren't loose and obviously empty shells I didn't try to add them to my collection.
We climbed the steep stairs to the top of the grassy hill at the back of the beach and meandered along a roughly cut path, brushing through the long grasses which were being combed with the still rather chilly breeze. I love the image in the bottom montage, in the bottom right hand corner where the sea can be seen through the squares of fence- it reminds me of a set of printed canvases mounted on a wall, creating one striking image but in several parts. 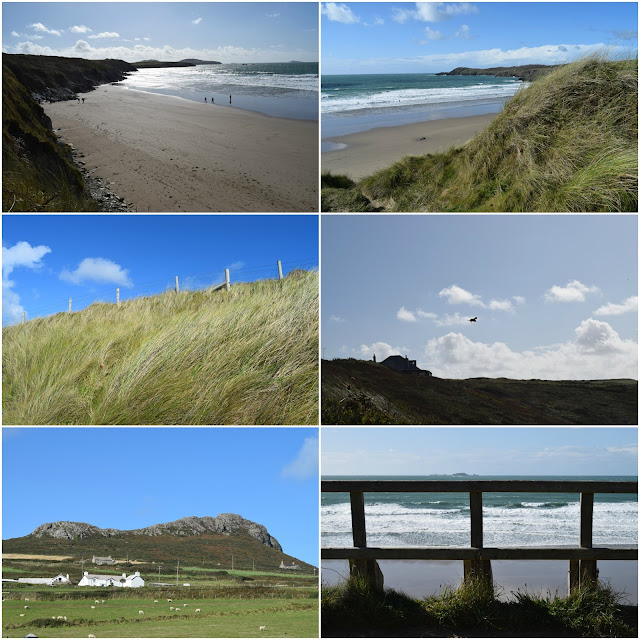