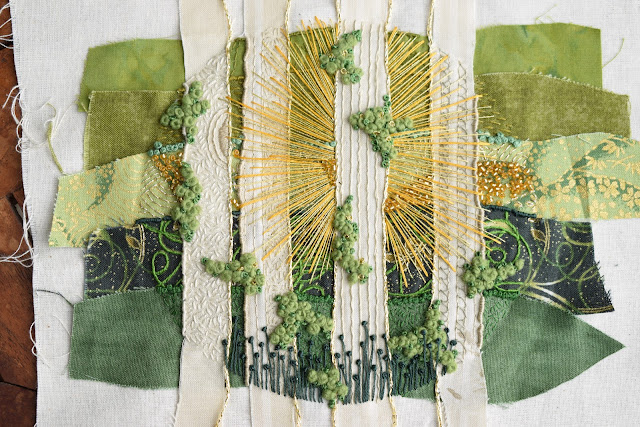 I started writing this post a couple of days ago and then had to turn the computer off to go out and forgot all about it! It was only as I came to write another blog post about something else that I realised I had a half written draft waiting in my post log.
This lovely stitchscape has been floating around in my creative brain for a while now, and I am very pleased to be able to release it into the wider world. It's an image that I point out to friends and family on pretty much any car journey we travel on when the sun is shining; "gosh, look at those sun beams coming down through those trees!!! It's so golden and glittery!!!"
I get a lot of "mhms" and "yes dear" in return but the image is branded on my brain and has been wiggling and jiggling, desperate to get out into the hoop. 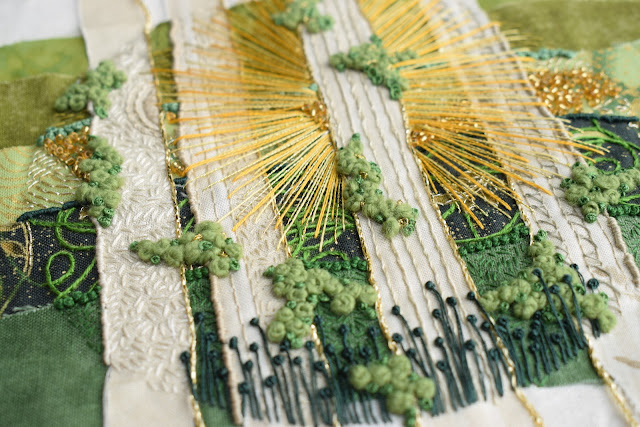 Even once I had the basics down, the embroidery still had to wait several weeks until completion as I had layered up the fabrics as part of a demonstration for a class I was teaching, and then the demonstration hoops got set to one side for a little while. I am gradually working my way through them and will set up another load of hoops for the next class. It's quite a nice way of working actually as I can grab a hoop and my sewing box on my way out and have a project on the go without having to take all of the fabrics with me to cut up. It's a stash of pre-prepared stitchscapes! Very Blue Peter. 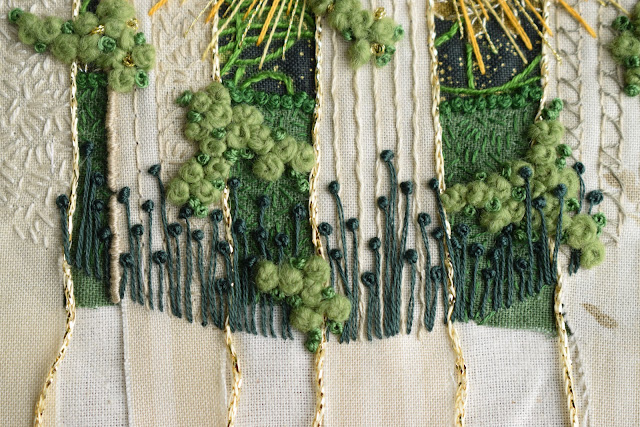 The glittery part was very strong in my mind. Even before I started I knew it had to involve gold and glitter, metallics and sparkles. Two of the fabrics I have used are from a Japanese fabric stand I visit at the Olympia Knitting & Stitching show, and have metallic gold within the print so we were already onto a winner even before the fabrics were cut up! 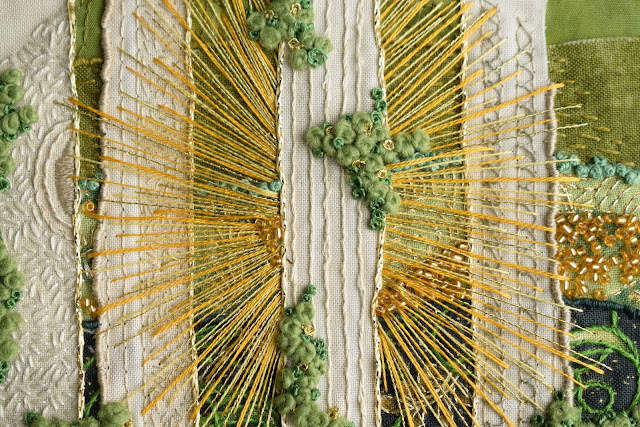 The background green layers were covered with embroidery first. Single strand back stitch in the space dyed top green layer, following by rows of running stitch in the next green layer, the golden lines in the first Japanese print fabric were followed with DMC metallic gold thread (single strand), and then every dot within the existing print covered with a golden bead. It created a really random bead pattern among the trees which I love as it reminds me of the dappled sections where the light fights its way through the tree canopy. 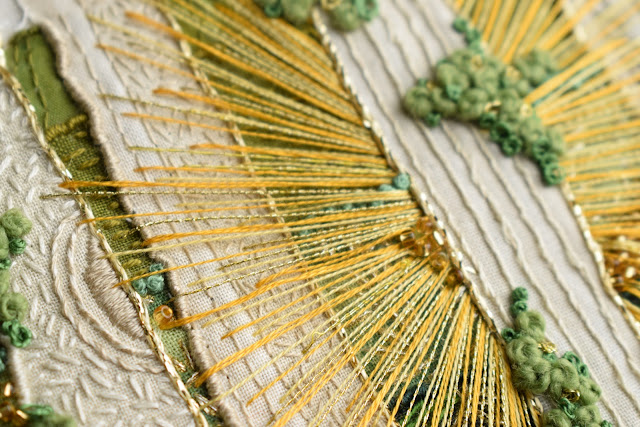 The next Japanese fabric has lovely bright green swirled lines in the print, combined with more golden printed lines making leaves. The gold was again back stitched with my DMC metallic gold thread, and I worked whipped back stitch over the green lines which makes the swirls stand out beautifully- well, the bits you can see around the sunburst.
Finally, the bottom green layer has some sweet seed stitch which has been finished off at the bottom with dark green pistil stitches. I had to put the 'scape to one side for a couple of days after finishing the sunburst as I deliberated over what to do about this bottom. Originally I was just going to leave it without anything at the bottom but it looked unfinished, like the trees were hovering in mid air as there was nothing to ground them. It looks much nicer with the pistil stitches and I really like how they curve along with the hoop. 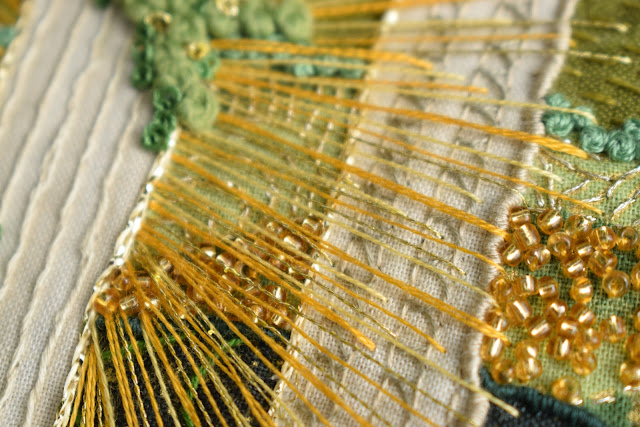 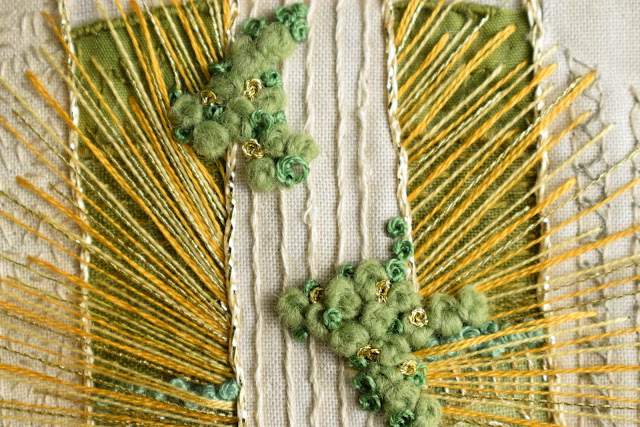 The trees have been done very simply and use the same fabric in each strip, but a different part of the fabric. The total print is an irregular stripe with some areas of floral print, but where I have cut the trees, a couple have lots of stripes and one has no stripes at all!
I have made a little wooden knot with whipped running stitch and satin stitch surrounded by seed stitch, other trees have whipped back stitch and one (on the right) has a kind of double whip stitch/ woven thing going on. It was a bit experimental. 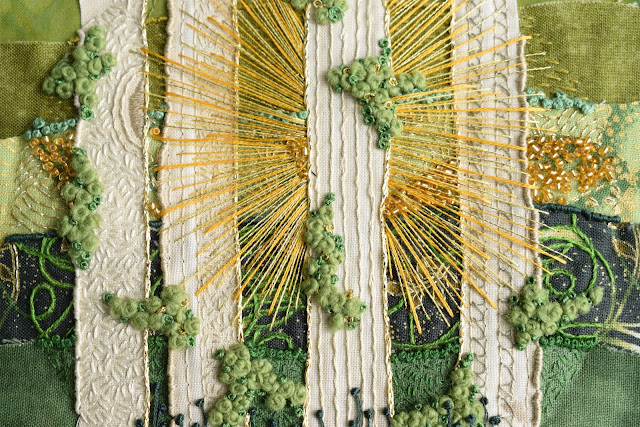 The leaves I absolutely love. I have used my chunky Stylecraft Special DK acrylic yarn (but used two strands out of the three) to make super chunky french knots, then combined these with large french knots in DMC embroidery thread, and in areas where the leaves would be touched with sunlight (ish), added in some DMC metallic gold french knots. The golden thread edging the trees is a metallic crochet yarn, and only runs down certain sides to keep the illusion of the sun's position behind that middle tree. 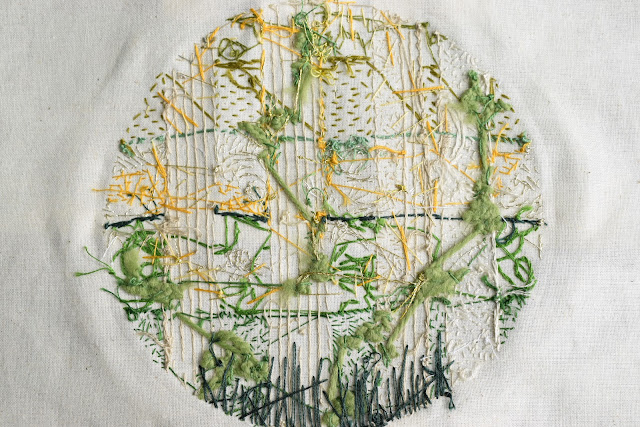 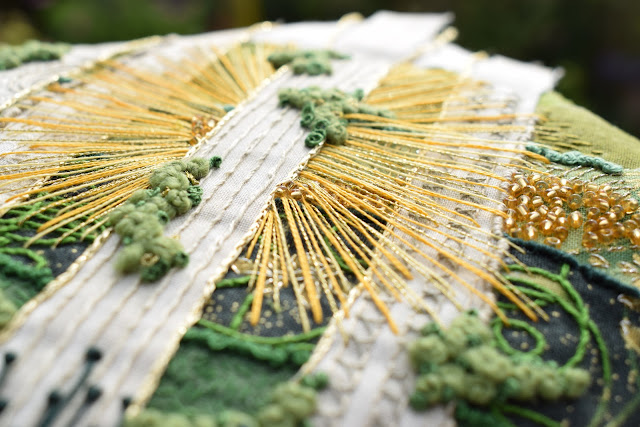 The sunburst itself is made up of more DMC metallic golden yarn as well as two colours of yellow/ochre thread with a double strand. Sunbursts are such fun to make! They build up very quickly and it is very satisfying to just go wild and crazy with the stitching! 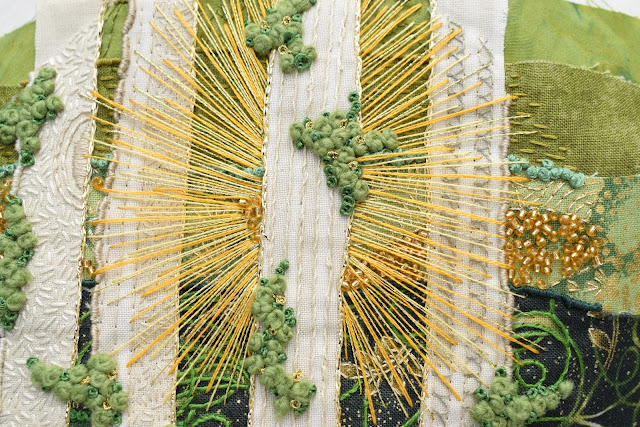 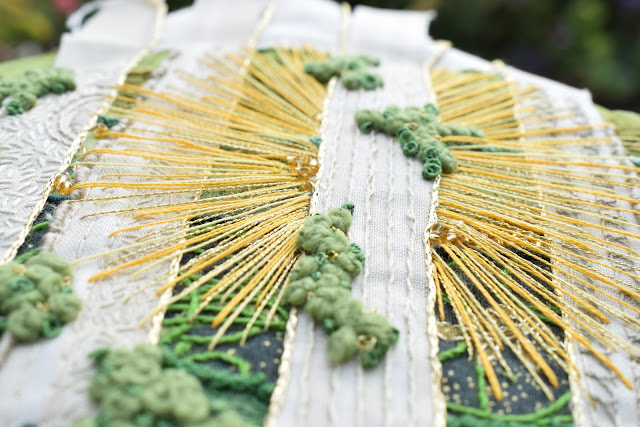 I will definitely be turning this one into prints and greetings cards I think, and am already envisaging trying a similar thing again but in the snow -- ooooh, silver sunbursts with pearlescent beads, frothy white french knots and pale yellow beams..... definitely one to keep in mind. 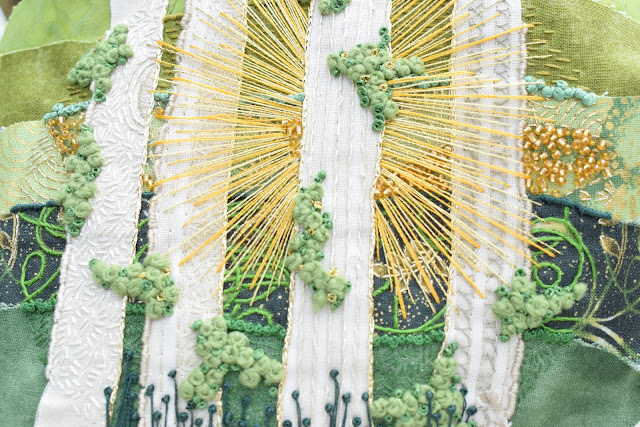