Oh I have some BIG and EXCITING news to share with you! I've been bursting to tell you all about it for a couple of months but was sworn to secrecy, and have had to tightly seal my lips so as not to accidentally spill the beans. There was only one little clue I was able to give and that was the above photos but other than that, mum was the word!
Essentially, several months ago I went to the-stitchery in Lewes for an interview. Sadly I didn't get what I was there for but instead a fabulous new opportunity arose in the form of working on a kind of freelance basis, in cahoots with the-stitchery itself. I was asked to take lengths of any fabric I wanted (talk about a kid in a sweet shop!! Anything I wanted?) and create three colour combinations, bright, mid and pastel with a view to turning the fabric strips into a stitchscape specially designed to be a kit. I was in my absolute element and it was the best afternoon I think I have ever had. I didn't go completely mad, and restrained myself quite a lot as there are so many lovely things in that shop- the ribbons and trims especially are really nice- but I did eventually leave clutching three little bags stuffed with goodies! 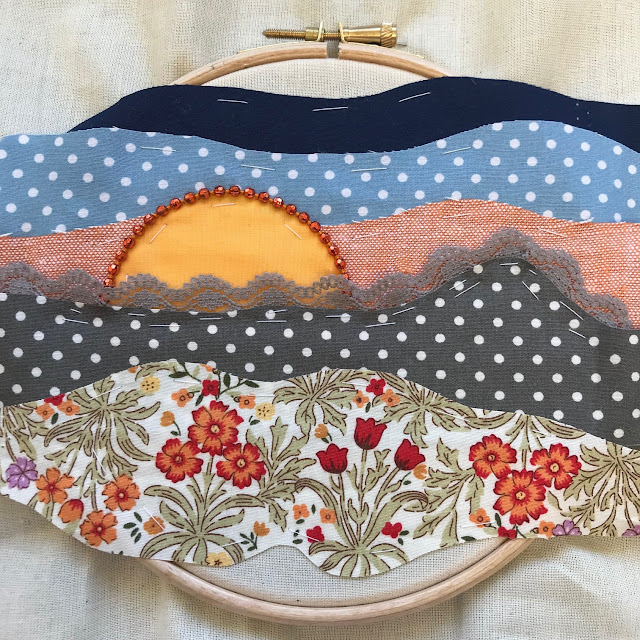 We had agreed that at least one of the designs should feature a sunburst as that is a really strong and popular image, and the next day I sat in my studio and cut and layered all of my stitchscapes, noting down the fabrics and shapes and sizes as I did so.
There is quite a lot of effort that has to go into a kit, everything has to be written down as you go along so that nothing is forgotten, and rather than just changing colour or adding in a bit of this and a bit of that, I have to be quite careful with what I use so that I don't over complicate things. My usual stitchscapes can be very complex, and whilst I don't want to under value those that make my kits, I don't want to make the stitches so hard that no one wants to buy them! Lots of people who buy my kits are beginners or those not quite sure of themselves and it's nice that they feel able to use one of my kits and create a beautiful image without tying themselves into a knot because it's too hard. 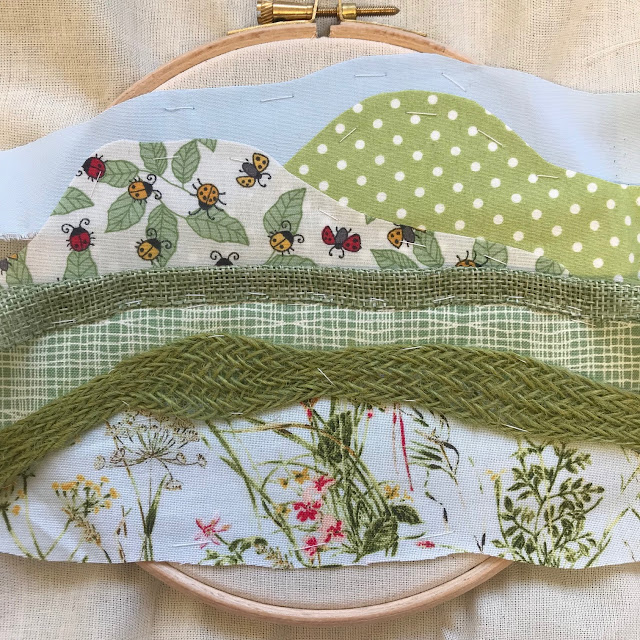 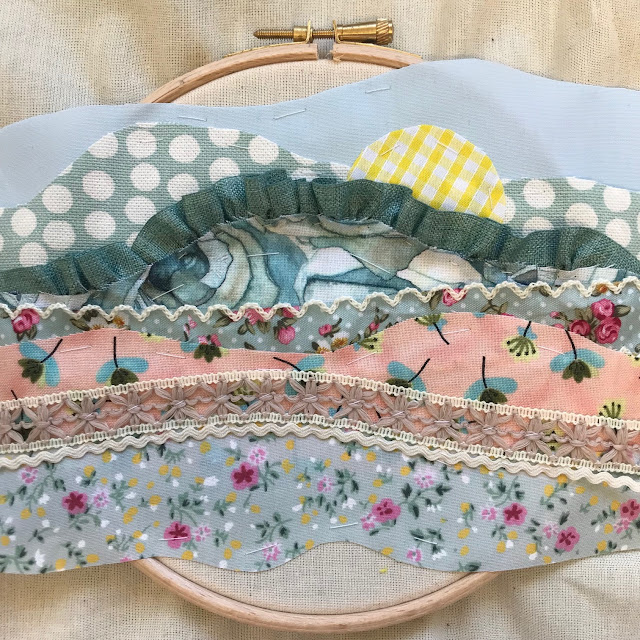 See what I mean about the lovely trims? The above image was a design I wasn't so sure about. I like the colour combinations but in trying to include all of these beautiful trims I think I lost a bit of the design. Because I wasn't happy with it, and I still had some fabrics left over, I decided to try again and ended up putting together a fourth (the bonus) design. Now all I had to do was to stitch the layers and write down every single thing I did, counting my threads along the way. 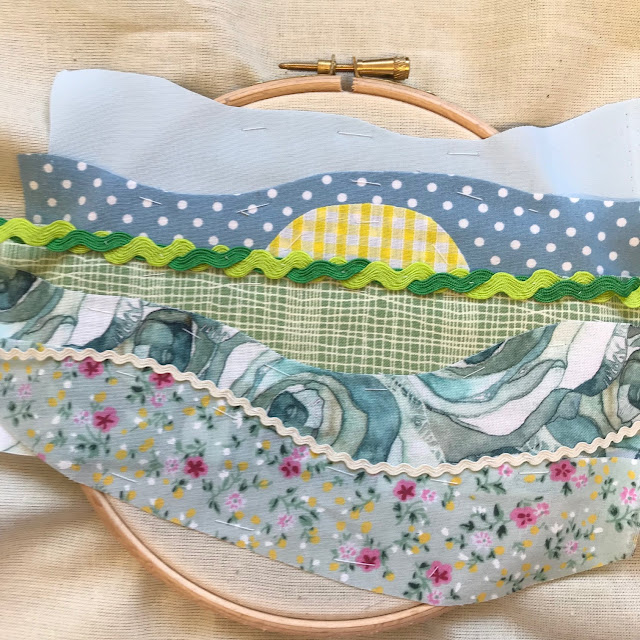 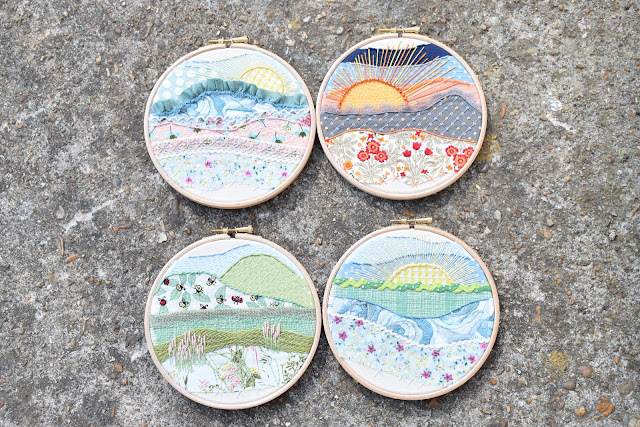 Before we continue I must first apologise for the strange colours of these photos. I was trying to photograph them in good light but not full sunshine and ended up under a sun umbrella in the garden which then made the photos a strange colour. To try and combat that I was using various settings on my camera but it didn't always work so some of the images are really bright and some are quite dark. You can still just about see what they're showing!
The stitchscapes were all made in 15cm hoops, although the hoop itself isn't provided in the kit. The idea is that you can either keep them framed in the hoop, or like my other 15cm pieces, mount them in a 20cm box frame. They look lovely either way. 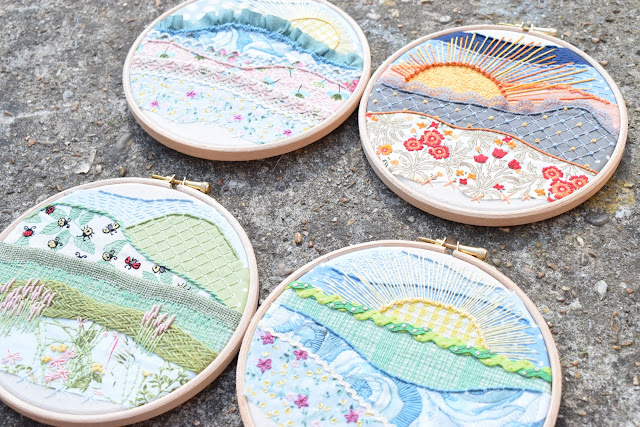 Once I had my four finished, I took them back to the-stitchery where the ladies who work there as well as some customers were asked to rate them in order of preference if they had to make one. Amazingly not one person had the same order of preference! Some, in fact, were total opposites. It was eventually decided that rather than just select one to make into a kit which had been the original plan, we would make two of them into kits. As they are such different designs anyway, it was thought that they would appeal to two different types of customer so hopefully our little plan works! 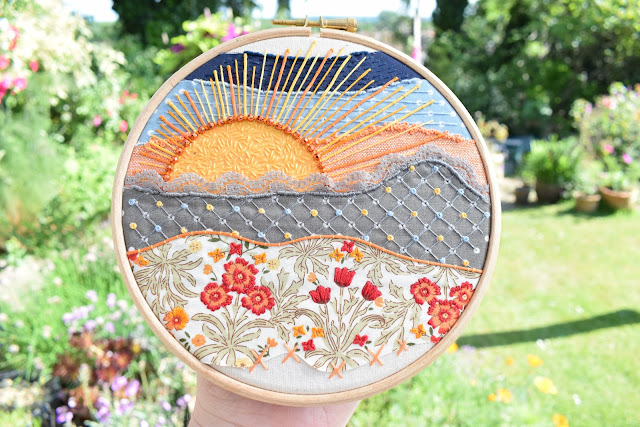 The first one chosen was this lovely sunset piece, which is probably the easiest of all of them to make. It has quite a few 'cheats' in it where it looks like you've stitched but you haven't really. The top blue layers are really easy to do with rows of running stitch on the top layer and then back stitch to turn a polka dot into a stripe. The orange layer only has french knots over the top as it is disguised by the sun rays and the grey lace (if it had been a piece I was making and not for a kit, I would definitely have put something over the orange fabric, but that's the difference in kit making). The sun itself is outlined by a sparkly bobble/bead trim that is just couched down, with seed stitch in the middle and couched down skinny cords combined with long straight stitches for the rays themselves. 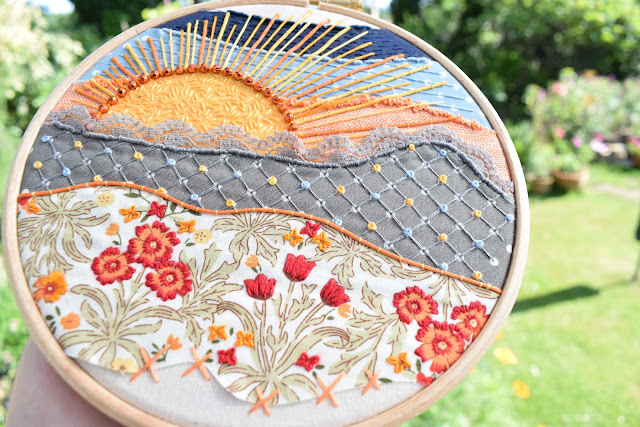 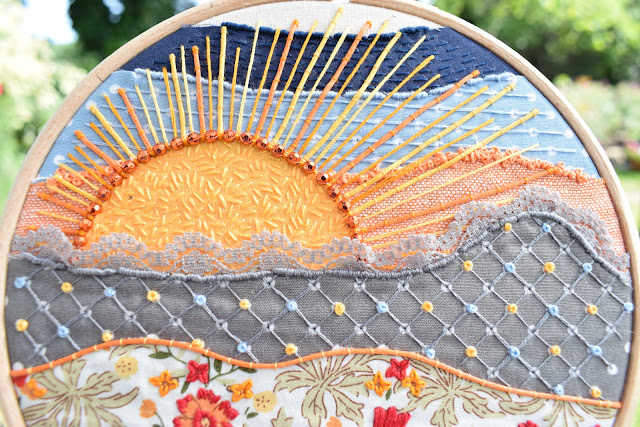 I really like the grey polka dot fabric with its alternate yellow and blue french knots, they look really nice against the grey, and carry the yellow through from the sun down to the flowers. It's all about balance!
The flowers at the bottom are mostly tiny satin stitches over the red parts of the print, whether that's a tulip or six petal flower tips, and there are some detached chain stitch flowers thrown in for good measure. Again, had it been a stitchscape where I wasn't feeling limited (I already had seven different colours going in there) I would have outlined the green leaves and filled in the orange part of the petals. But if you purchase the kit, there is absolutely nothing stopping you adding more colours in if you want to! 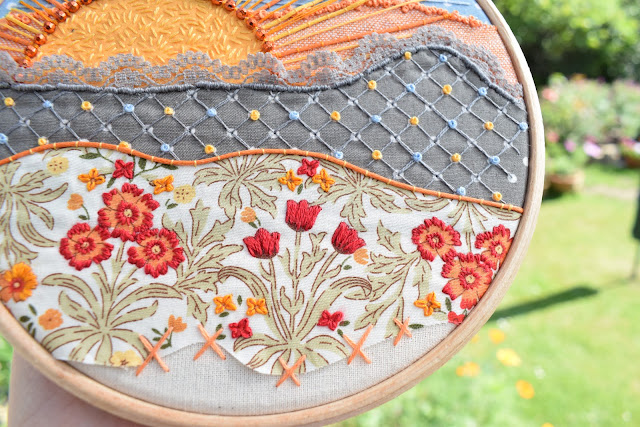 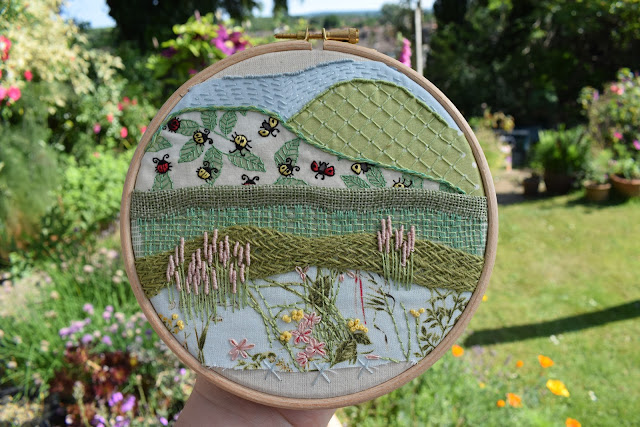 The second one chosen was this sweet little ladybird landscape design- purely because of the ladybirds I think, although the bullion knot flowers were quite a hit (as always). This one is a little bit more complicated in terms of the use of trimmings as the trim in the middle is a wide flat linen tape which I have folded, almost like a bias binding, over the edge of the green stripey fabric. You have to make sure that this is done at the first stage whilst you are tacking down the other fabrics, but if you were to purchase this kit then there are more instructions and handy tips on how to do so inside the booklet.
Lower down you have a fantastic jute tape- the same one I have used in my #inthehoop Spring kit, but in a green colour (and you can get it in a rather zesty orange!)- which you open out to the width you want and stitch it down. Funnily enough, one customer at the shop who was asked about the kit when we were displaying the final products, thought that the whole section of jute tape was some kind of elaborate cross stitch! That would take a lot of effort. 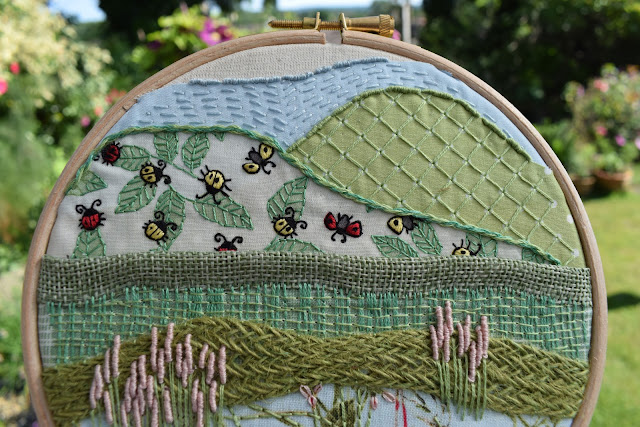 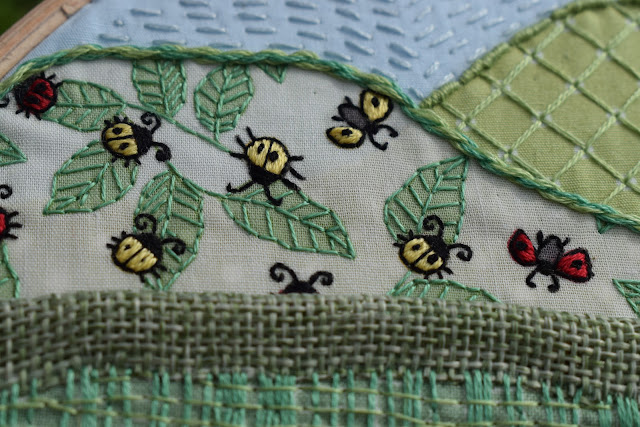 The ladybirds are a very sweet print, and I have gone over the wings with satin stitch in the red and yellow of the print itself. They were originally all different spot numbers but it got too complicated with the french knots so I have uniformed them all to one spot on each wing. You wouldn't want to be too greedy. Because of the little satin stitches, they have sort of puffed up as well which is rather nice. 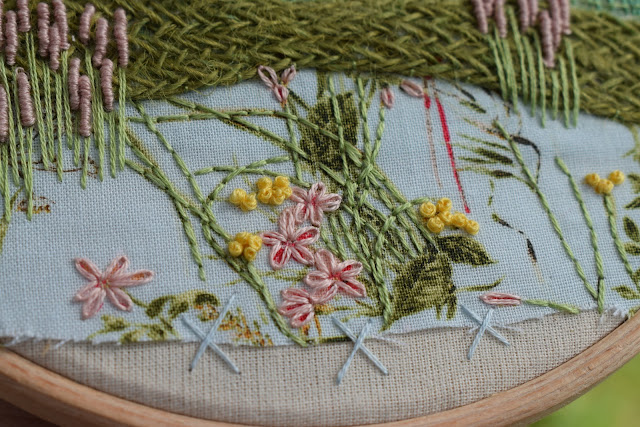 At the bottom, the floral layer enables you to be quite unique with your design as the pattern varies quite a bit. Essentially the green lines are followed with green back stitch, any yellow bits are covered in yellow french knots, and any pink petals are covered in detached chain stitches. Gaps in the stitching on the layer then allow you to fill in with bullion knot flower clusters. It's up to you where you position these. 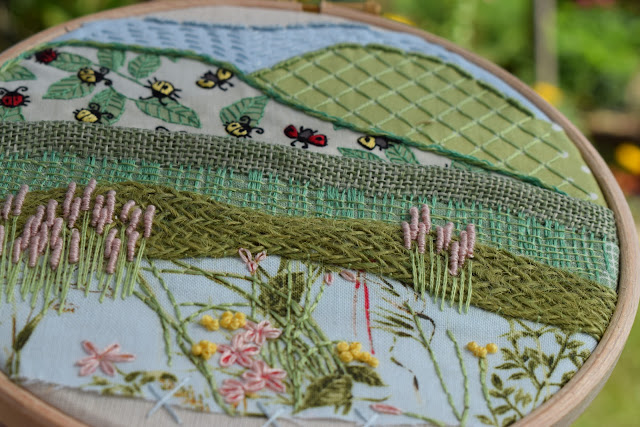 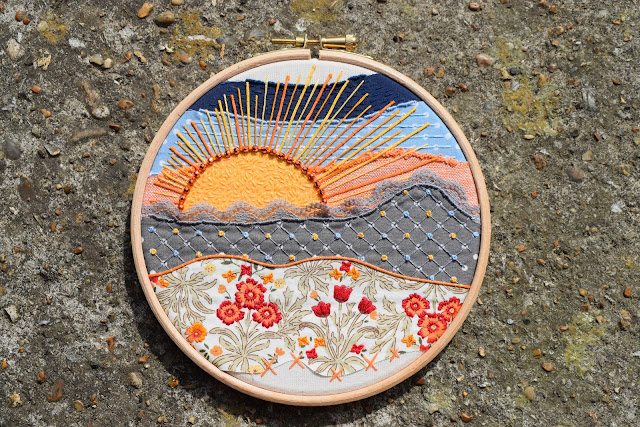 So there we have it! The two chosen designs! What do you think? Would you buy one? 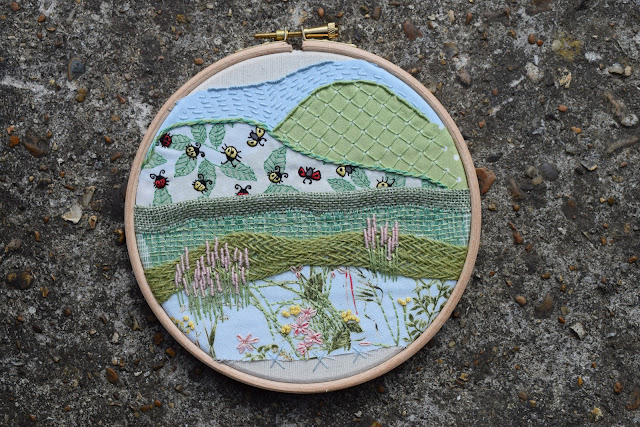 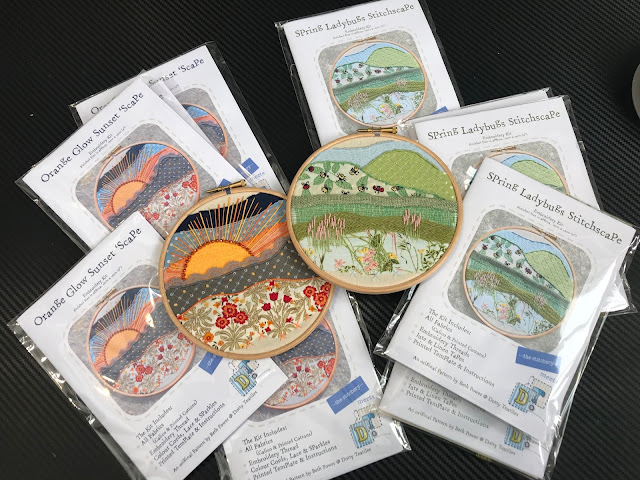 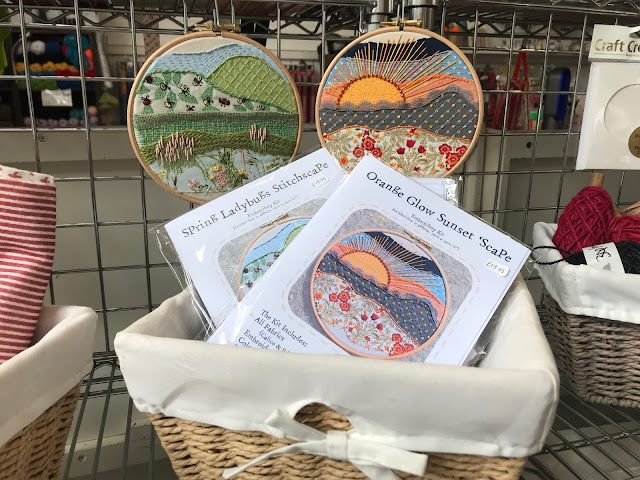 For anyone super keen and in love with one or both of these designs, they are exclusively sold in the-stitchery (£19.95 each) and currently only in store. However, if you live too far away, give the lovely ladies there a call and they will see what they can do for you (click on the link above to go to their website for contact details). If you aren't too far away, Lewes is well worth the trip as there is lots to see and do; quaint tea shops, flea markets, independent artisan and vintage stores, a castle, a ruined abbey, Harveys Brewery.... its a lovely place, and one very lovely building is called Riverside, where you will find the-stitchery upstairs! 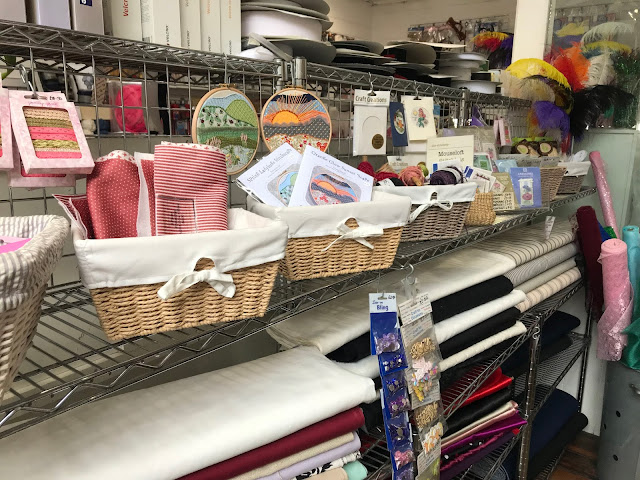 It makes me all heart-skippy just thinking about it! 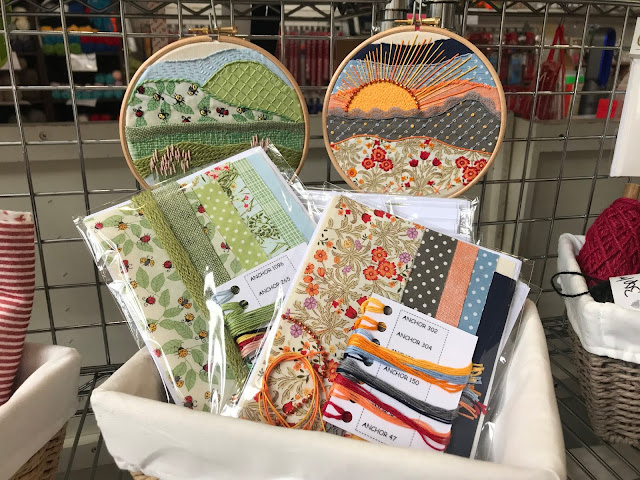